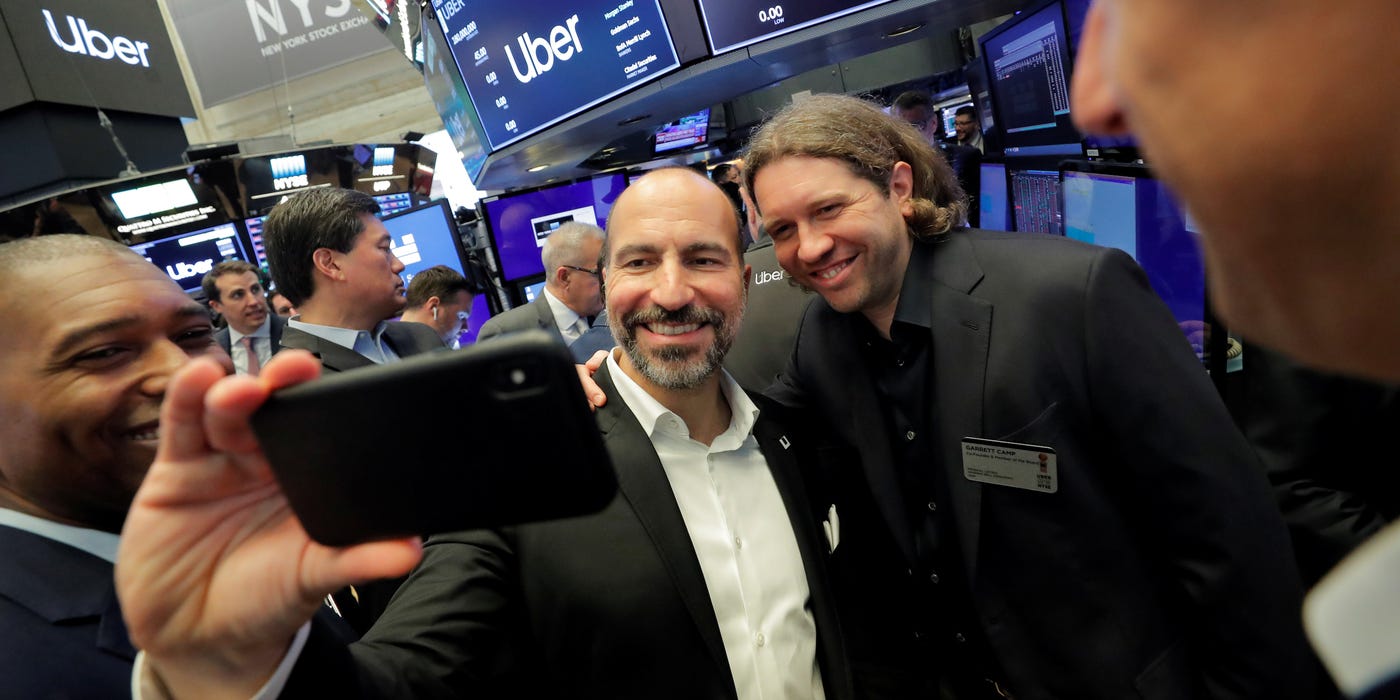 The Uber cofounder Garrett Camp cashed out roughly $13 million of his massive stake in the company this week, according to regulatory filings with the Securities and Exchange Commission.

The sale of 8,462,352 shares was worth $13,538,023, the filing shows, and will still leave the entrepreneur with a roughly 4.75% stake in the company. Camp also sits on the board, and he remains the largest individual shareholder after Japan’s SoftBank and the venture-capital firm Benchmark, according to Bloomberg data.

Travis Kalanick, the Uber cofounder who was ousted as CEO, began selling some of his stake as well last week, on a much grander scale. Kalanick, who’s working to build a “virtual restaurant,” or delivery-only kitchen business, sold $711 million worth of shares.

The sales by Camp and Kalanick came after the expiration of Uber’s “lockup period,” a set amount of time that’s common in initial public offerings in which insiders are not allowed to sell their shares in the company. When Uber’s period expired last week, heavy selling sent the stock down some 9% to record lows.

And as Uber fights to turn its first profit in the face of that falling stock price, the company looks very little as it did 10 years ago when Camp self-financed some of the company’s first rounds. “UberCab” wasn’t always a network of more than 2 million drivers providing rides at the tap of a button in 165 countries.

Instead, in those days of August 2008, the dream of a “next generation car service” was merely a slideshow presentation on Camp’s computer.

Business Insider has covered the original pitch deck before, when Camp first published it on Medium in 2017, but we felt it deserved a fresh look in light of a the company’s underwhelming May initial public offering, the launch of its freight business, an aggressive push into food delivery, flying cars, autonomous vehicles, and more.

Here’s how the founders envisioned Uber 10 years ago: 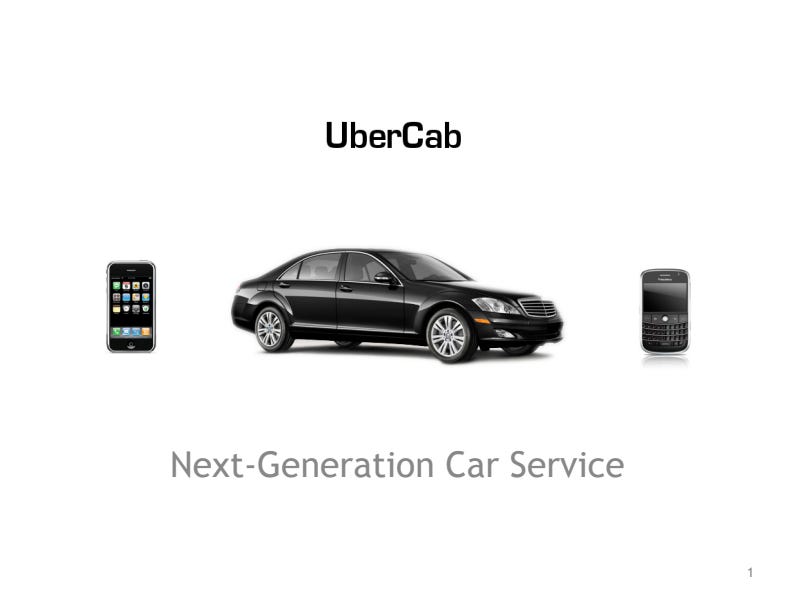 The first slide is a time capsule from 2008. Yes, that's a BlackBerry. 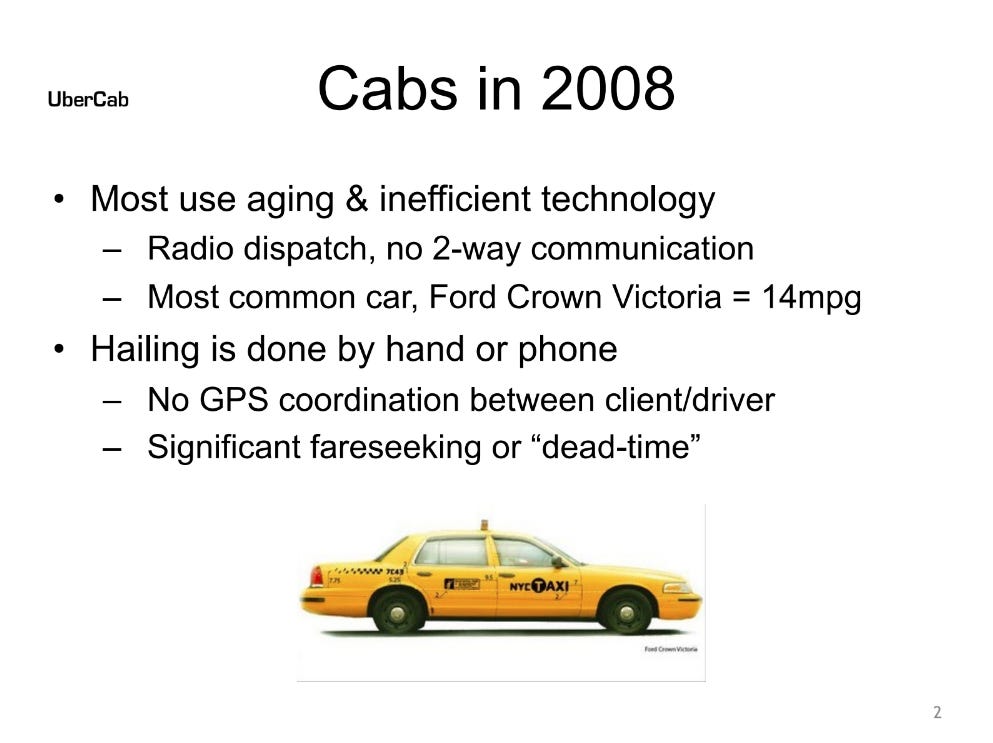 Ten years ago, hailing a cab was a very different affair.

While Camp highlighted "dead-time" with cabs, a 2018 report by Schaller Consulting found that for-hire vehicles drove an average of 2.1 miles without passengers between fares. Also, most New York cabs are now Toyota Camrys, which the city estimates to have an environmental rating of 25 miles per gallon. 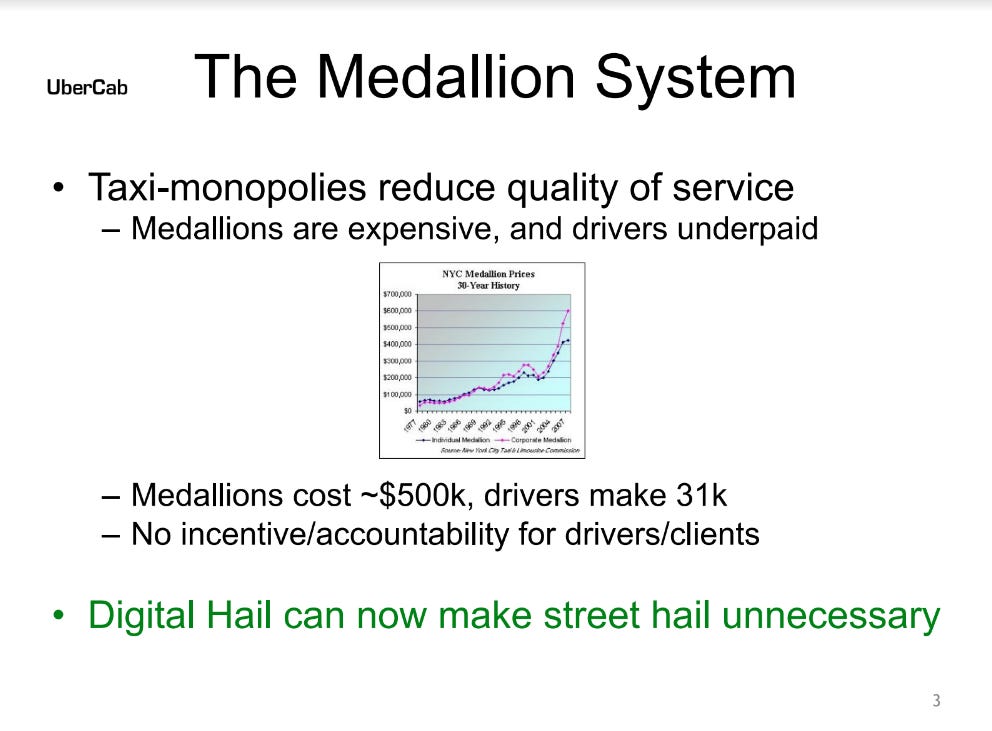 Uber has decimated the value of taxi medallions.

After the expansion of Uber in New York, the value of taxi medallions — limited amounts of which are sold at auction by the city — plummeted by nearly 75%. The industry largely blamed ride-hailing companies like Uber and Lyft, but a New York Times investigation found that the value of medalions had been inflated in a bubble reminiscent of the 2008 housing crisis. 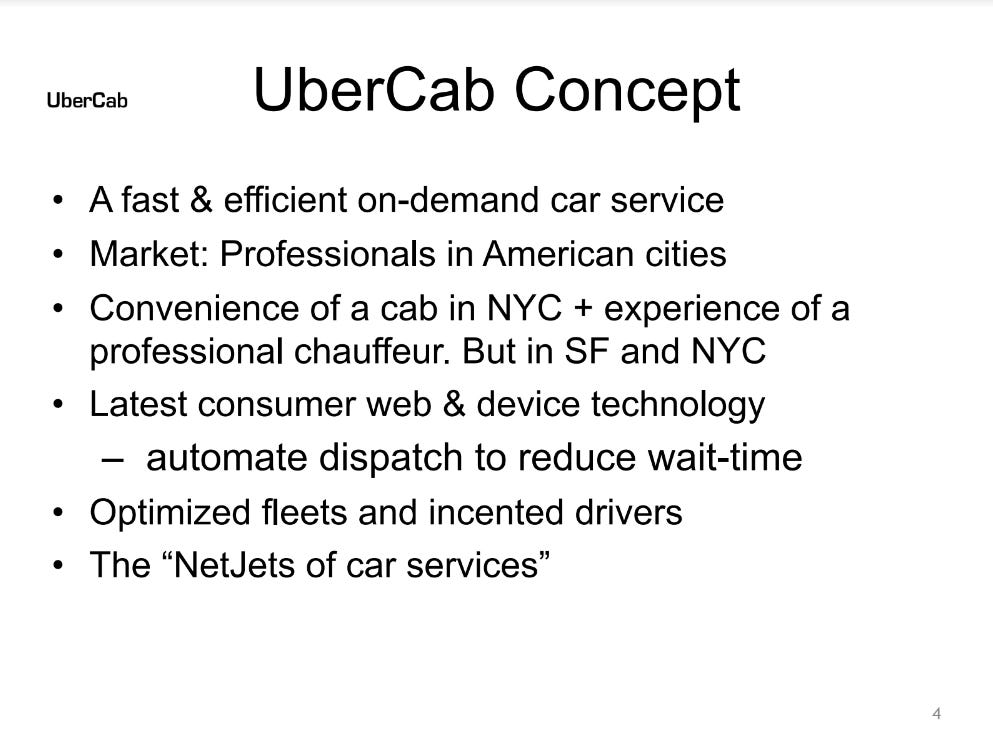 Camp said Uber would be the "NetJets of car services."

This, in a nutshell, was — and still is — Uber's value proposition. NetJets, a company that allows you to buy fractional ownership in a private jet — has been owned by Warren Buffett's Berkshire Hathaway since 1998. 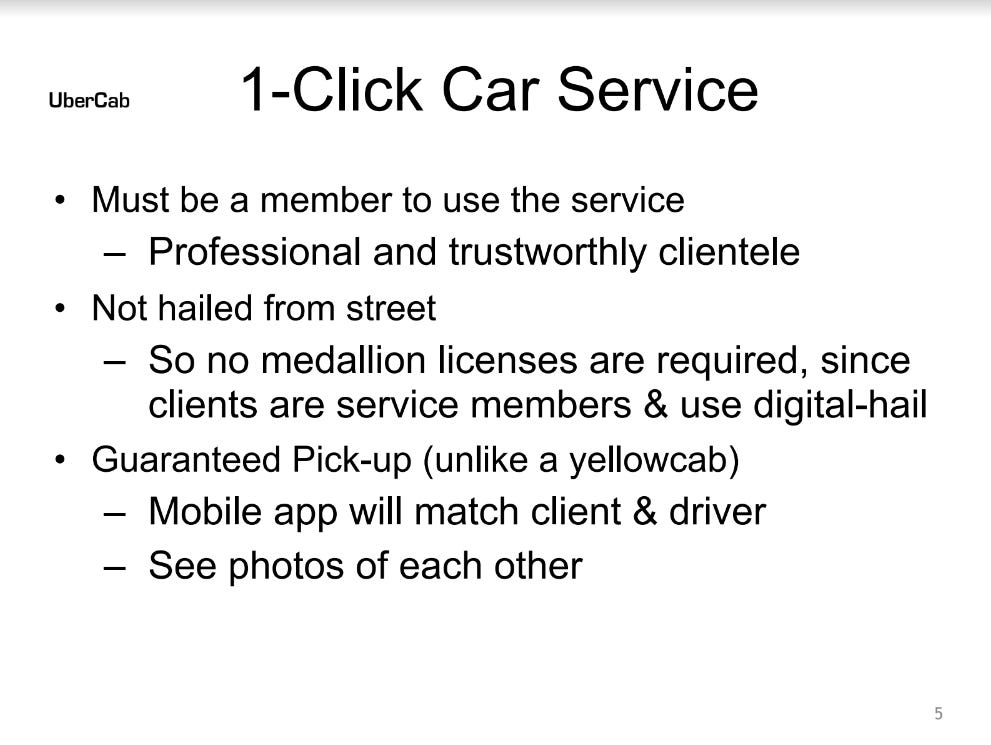 Today, anyone with a credit or debit card and a smartphone can instantly be connected with a driver. GPS and photos make finding your driver much easier — something that hasn't changed today. 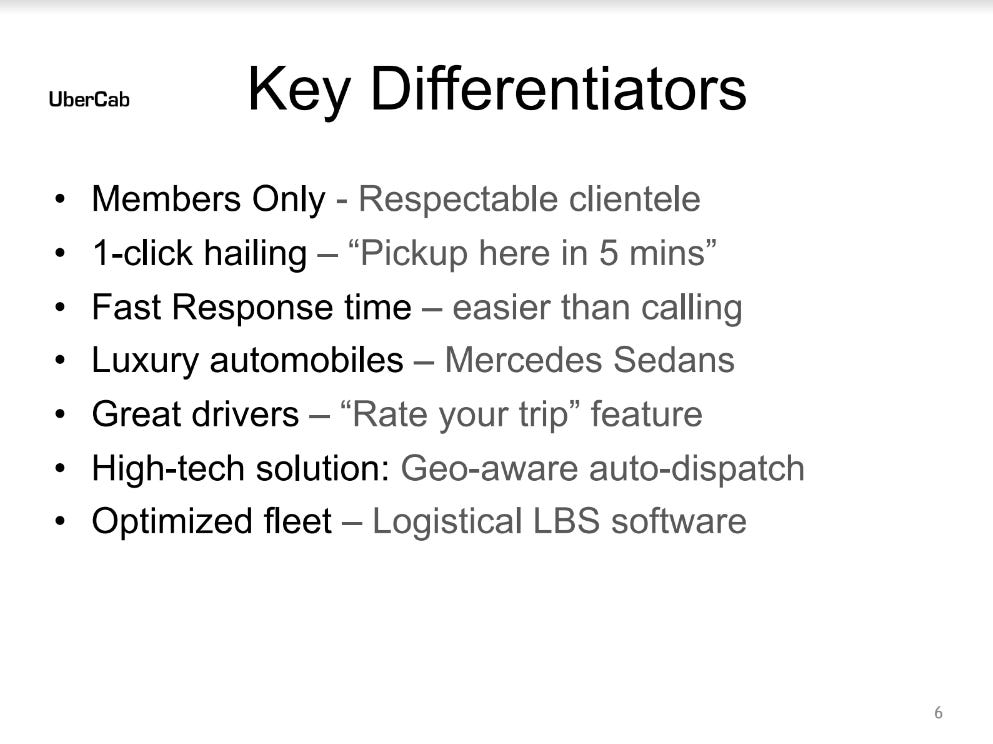 It's not just luxury Mercedes sedans these days, either. 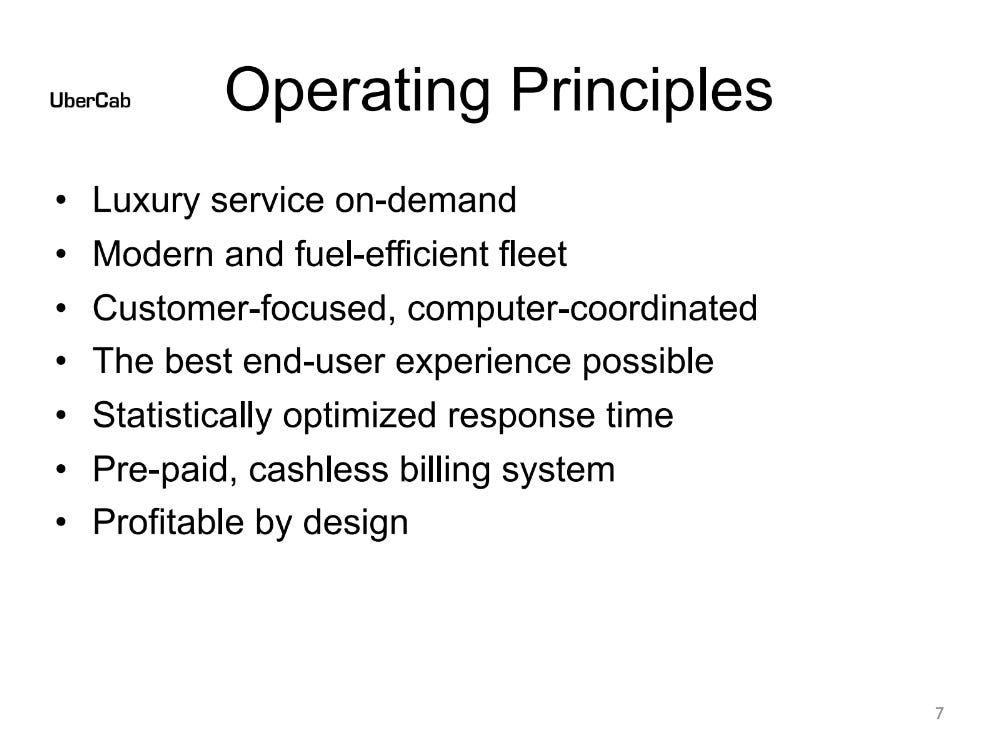 Uber would be "Profitable by design."

Uber has yet to turn a profit. In its most recent self-reported quarterly financials, the company said its growth had slowed while losses were continuing to increase. 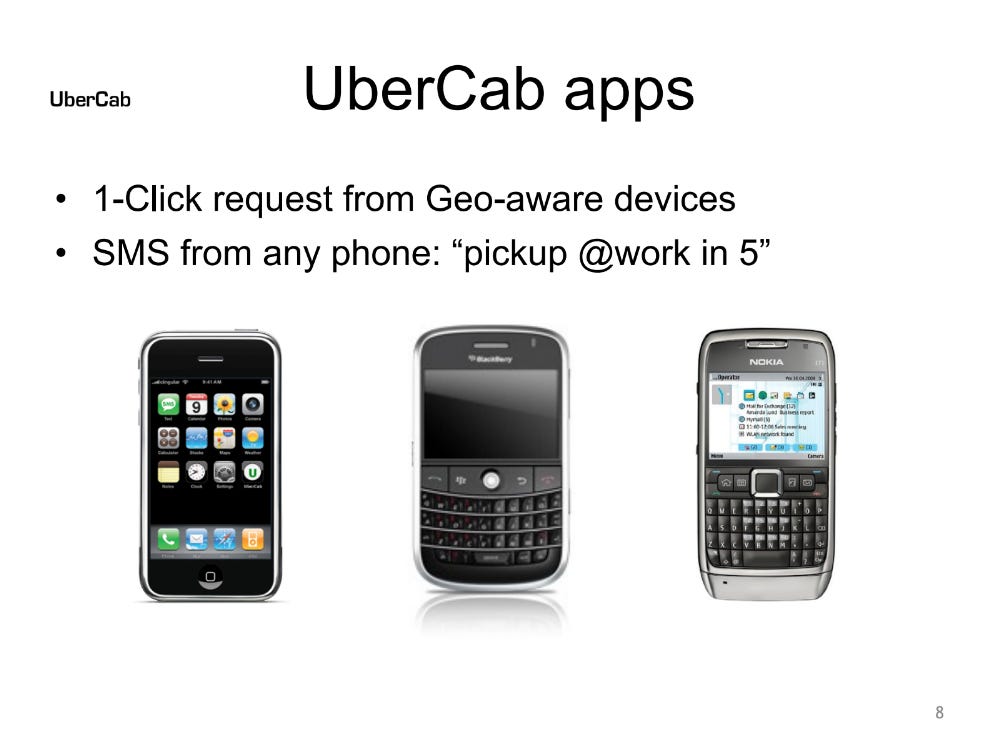 A car could be summoned using GPS or texting.

GPS is obviously still a main tenet of the app. SMS summoning, on the other hand, seems to have gone by the wayside. 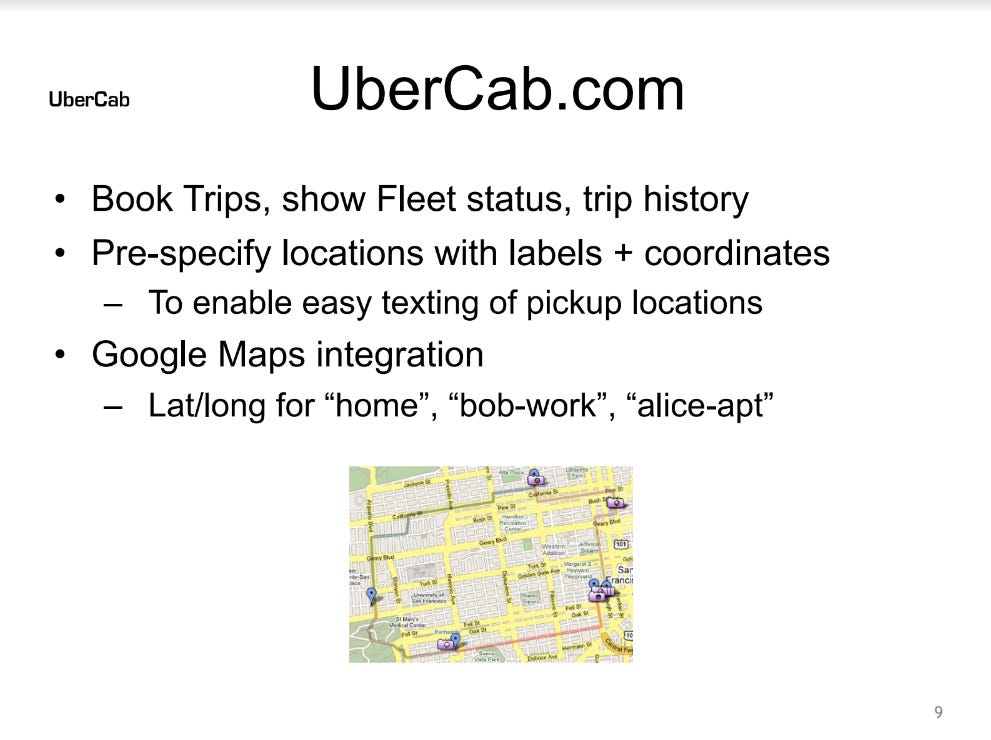 Saving destinations with specific labels would have been much more important for text-hailing.

Still, saving addresses into the app for easy selection is a big time-saver. 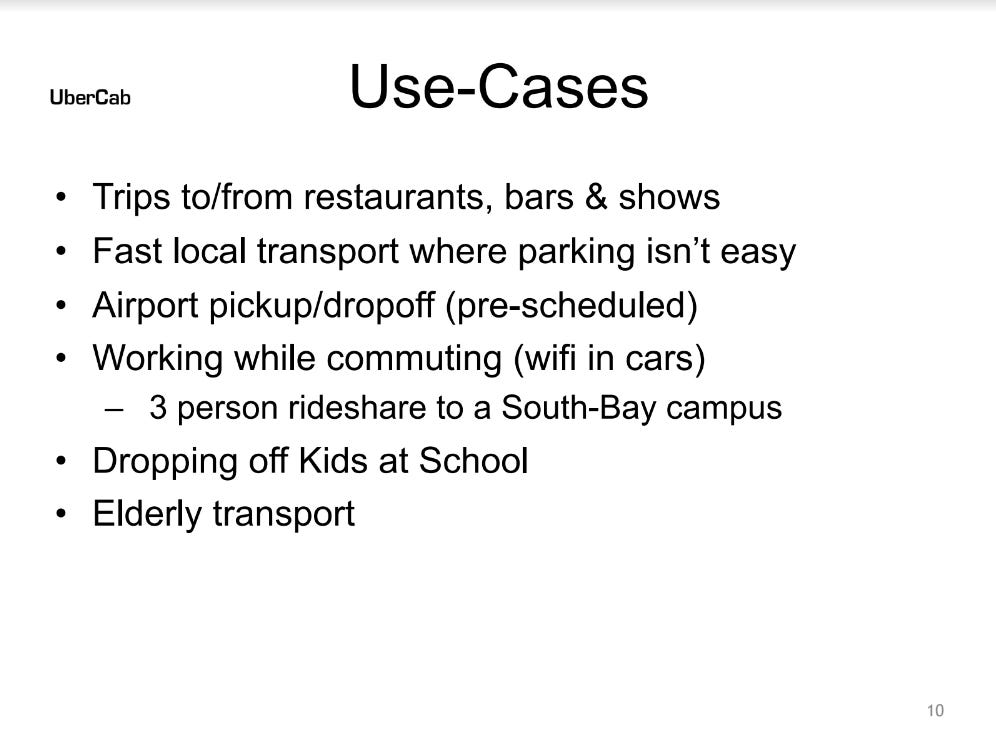 All of Uber's projected use cases still hold up. 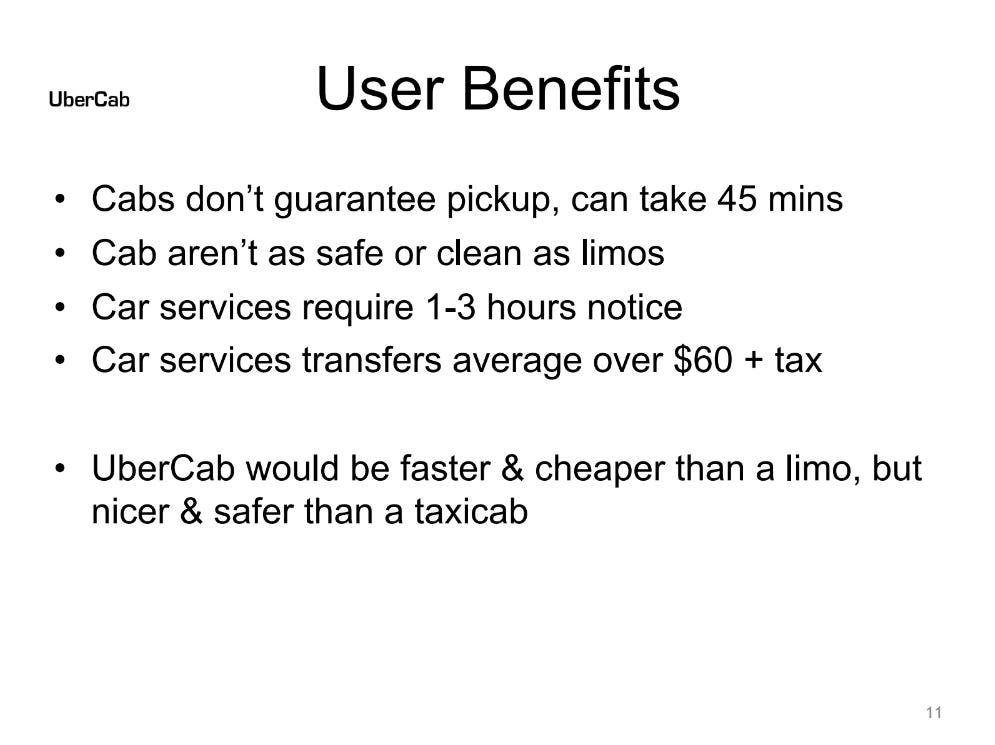 Uber would be cheaper than a limo but safer than a cab. 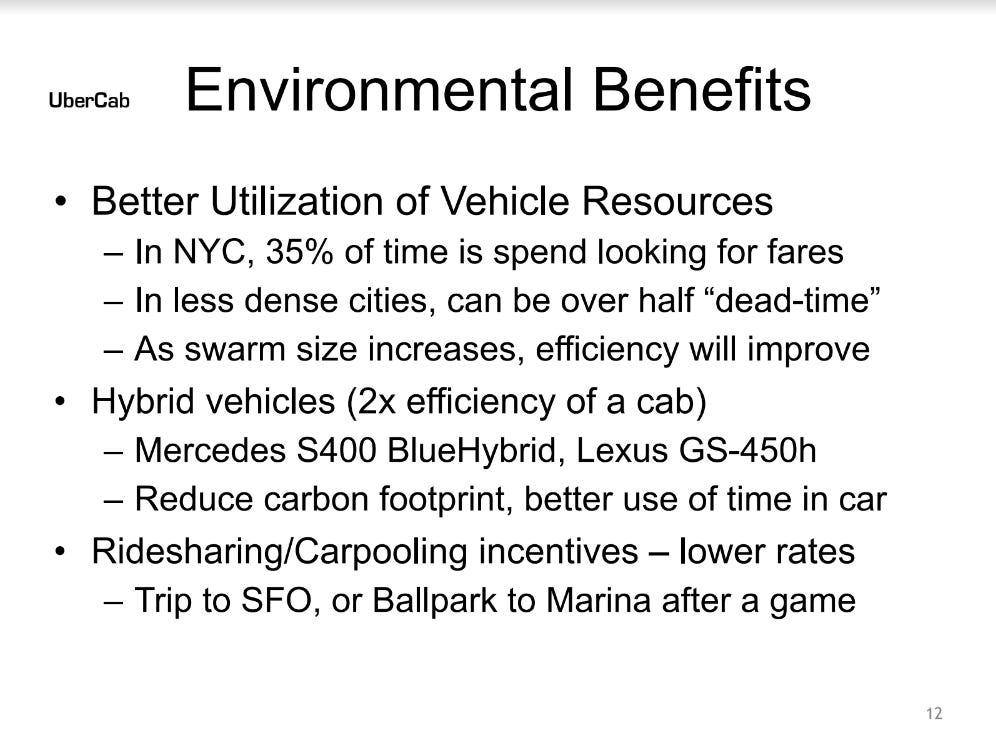 Not all of Uber's projected eco-friendly benefits have played out.

The same 2018 consulting report found that an average of only 63% of for-hire miles driven were with passengers. 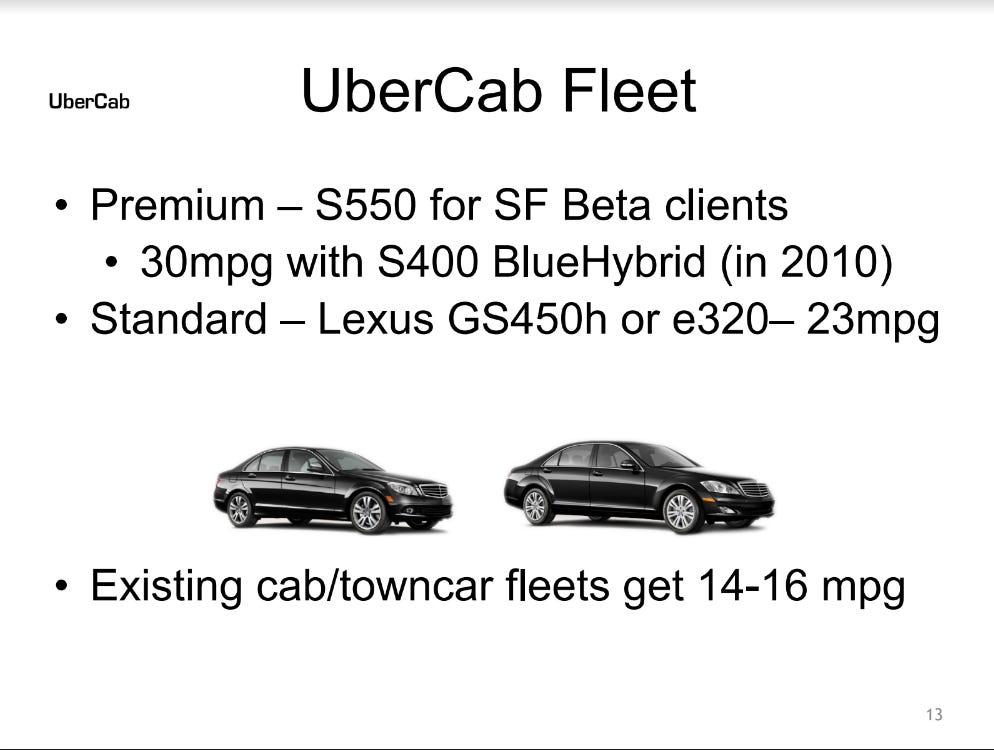 Today, a majority of the Uber fleet consists of Toyota Priuses and Camrys, Honda Accords, and Ford Fusions, as well as the luxury models it mentioned in 2008. 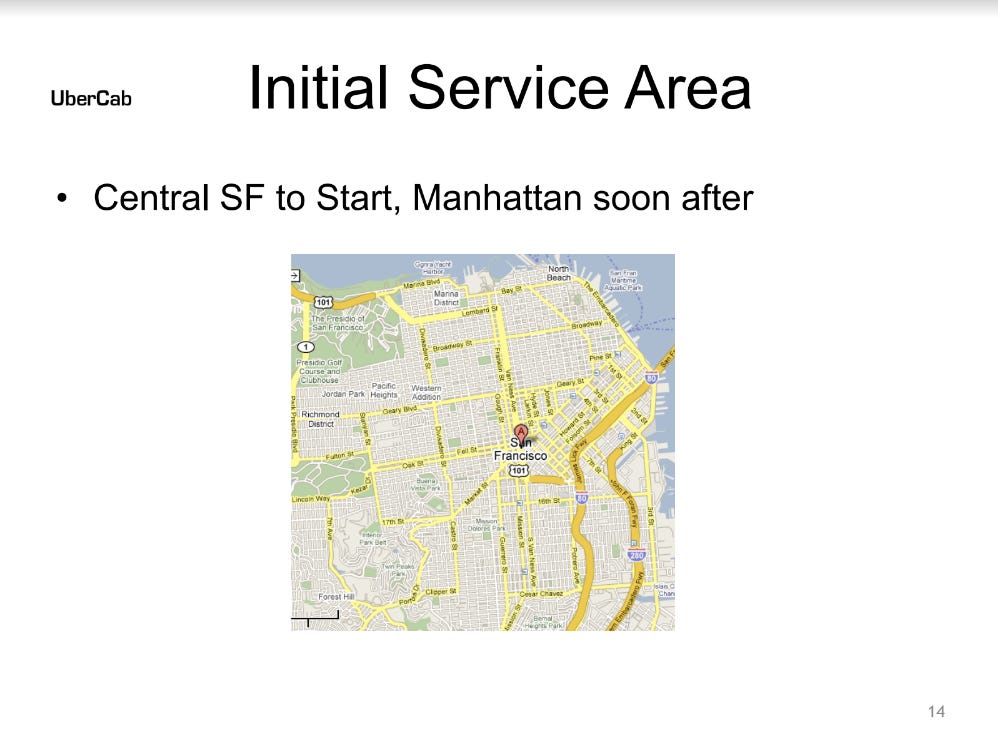 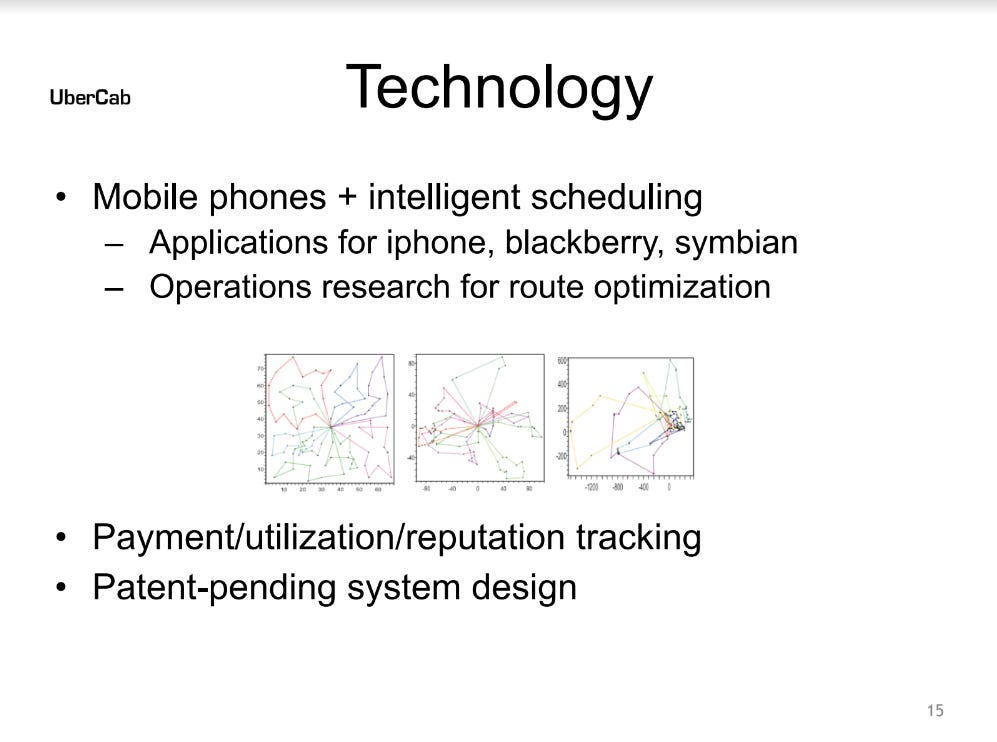 Camp had a plan for surge pricing.

Though traditional surge pricing is now largely gone, Uber had long foreseen its ability to use trip data to forecast demand and incentivize drivers in areas of increased trip requests. 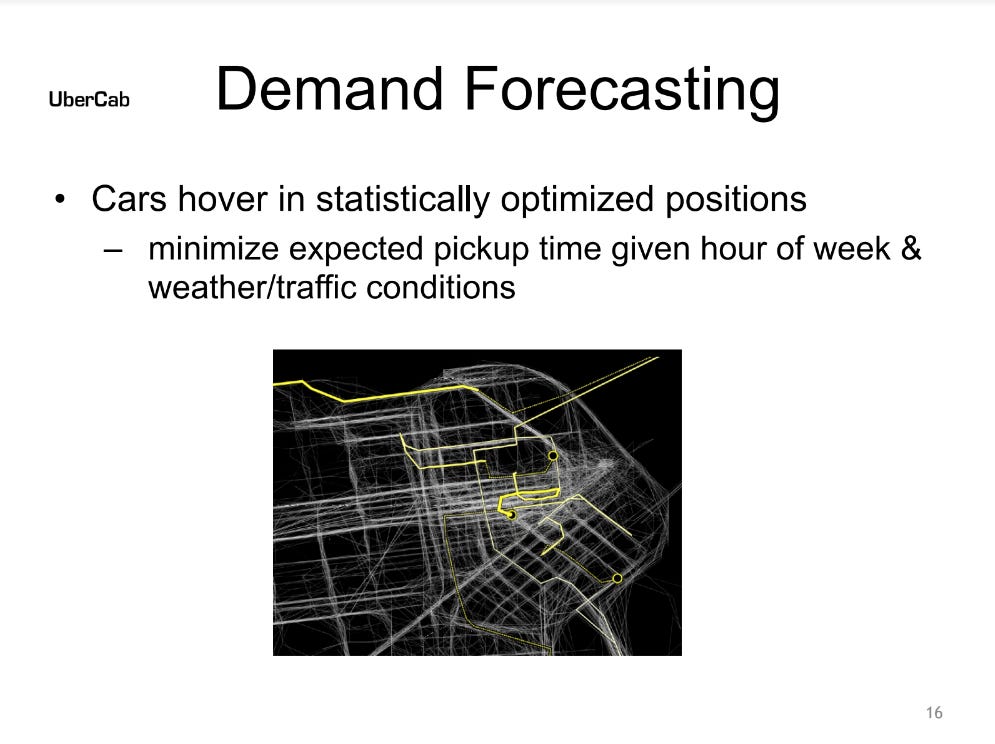 It all comes down to data.

Knowing where riders and drivers are — and what areas will be popular in the future— is still one of Uber's most valuable products. 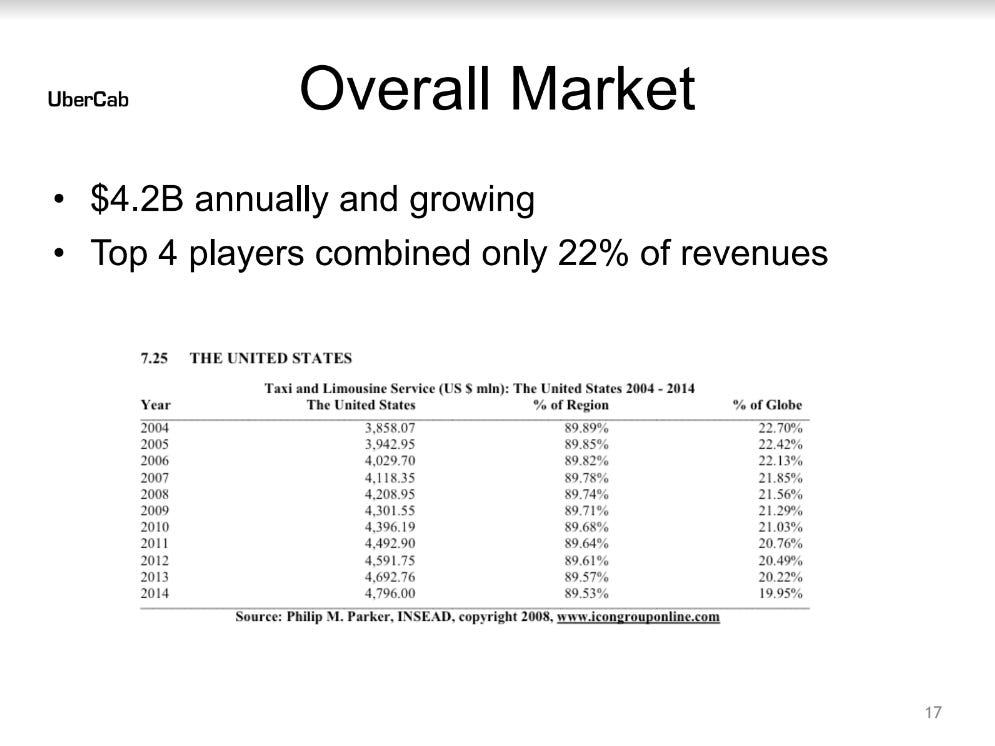 Even Uber's diminished market cap today is a far cry from the $4.2 billion estimate it had 10 years ago. 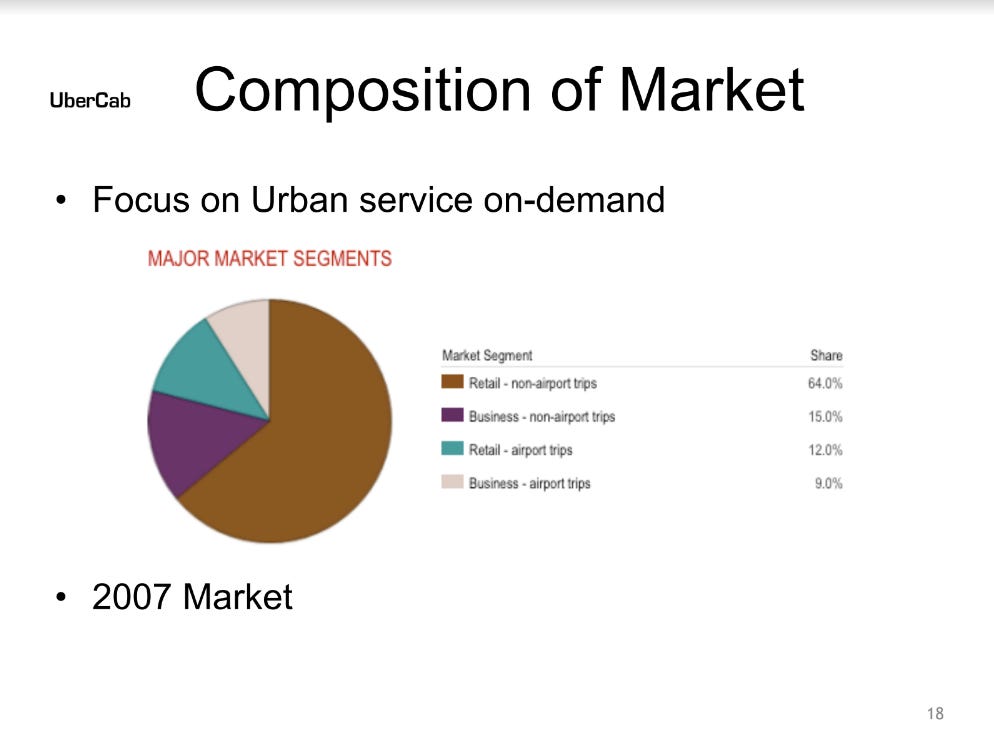 In many cases, Uber rides have become so popular at airports that some cities have altered their pickup and drop-off lanes to better facilitate ride-hailing. There are still cab lines, though. 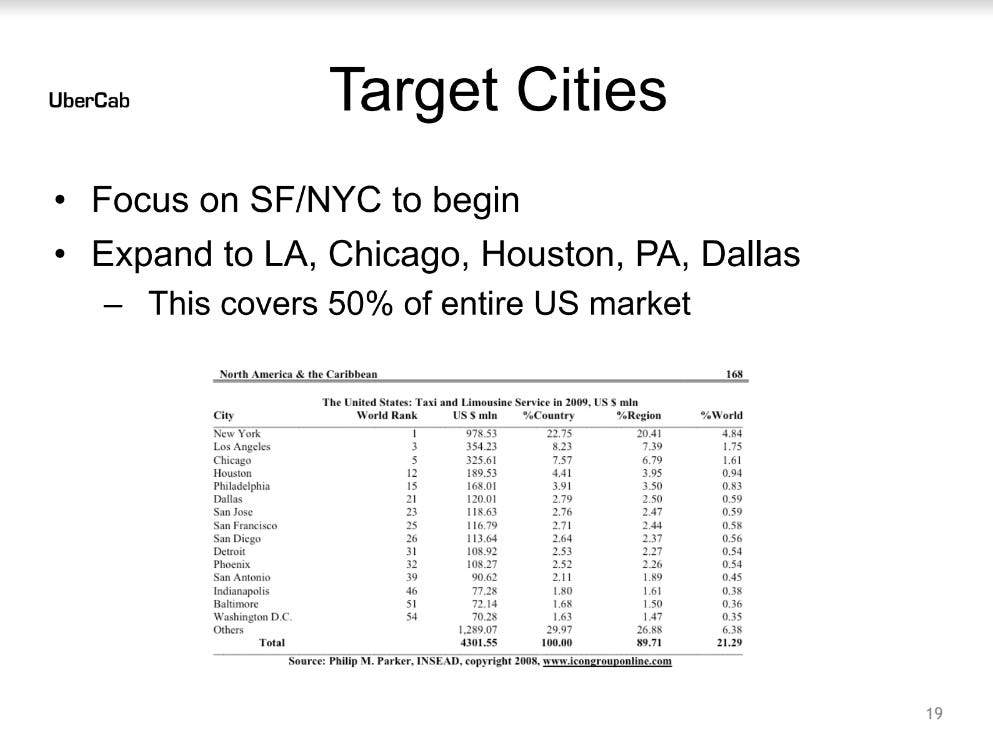 Today, Uber operates in 400 cities. But its original ambitions were much smaller. 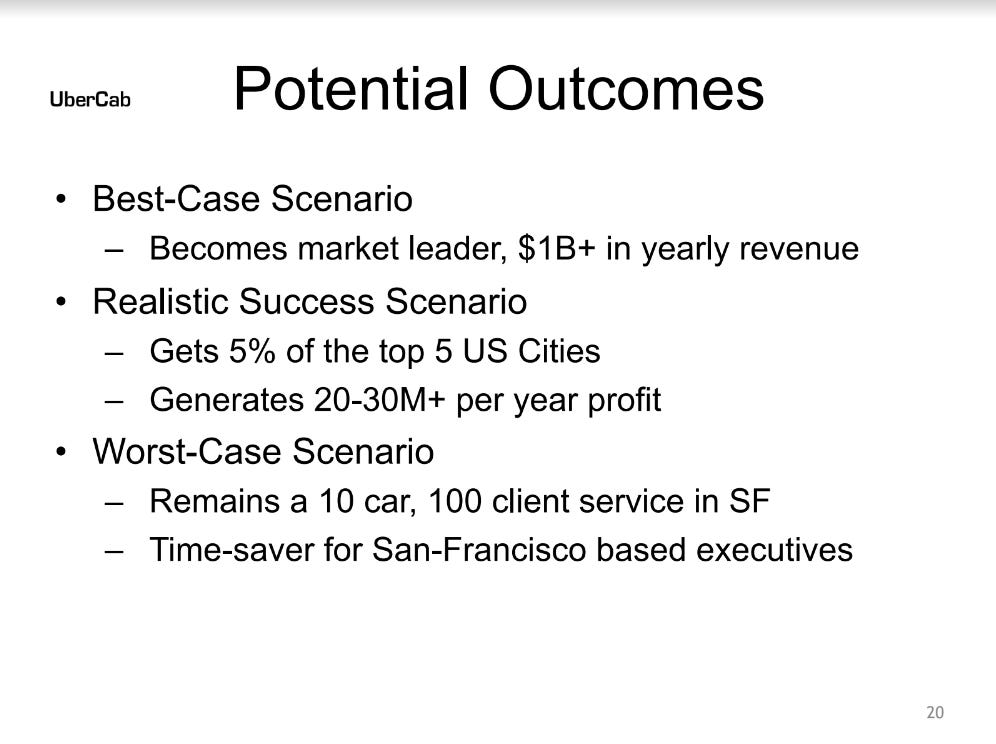 And the company easily hit its best-case scenario for revenue. 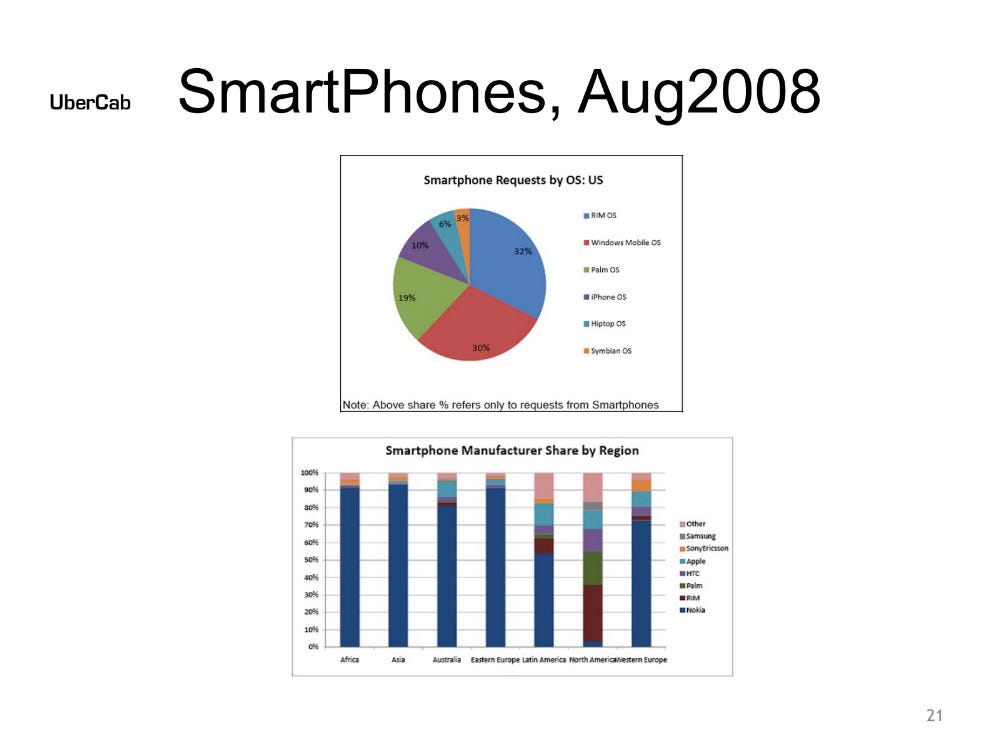 The market breakdown of smartphones in 2008 is another great example of just how ephemeral tech can be.

Today, Samsung makes up the largest smartphone-market segment, with Nokia's market share just a fraction of what it was then. 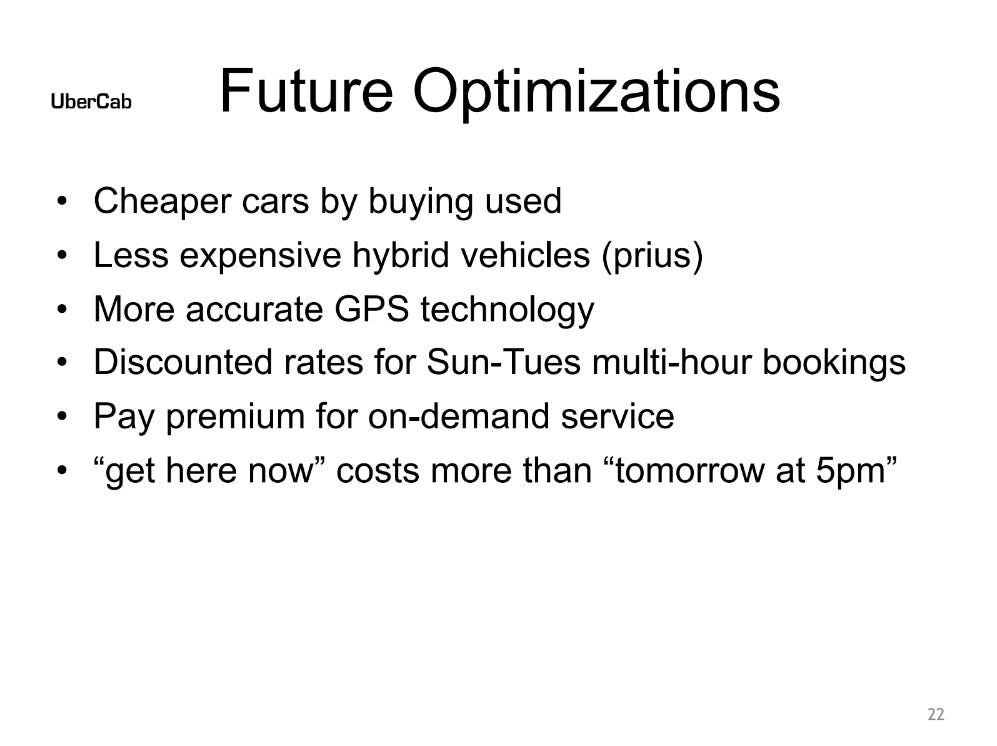 Most of the company's "Future Optimizations" have played out as well. 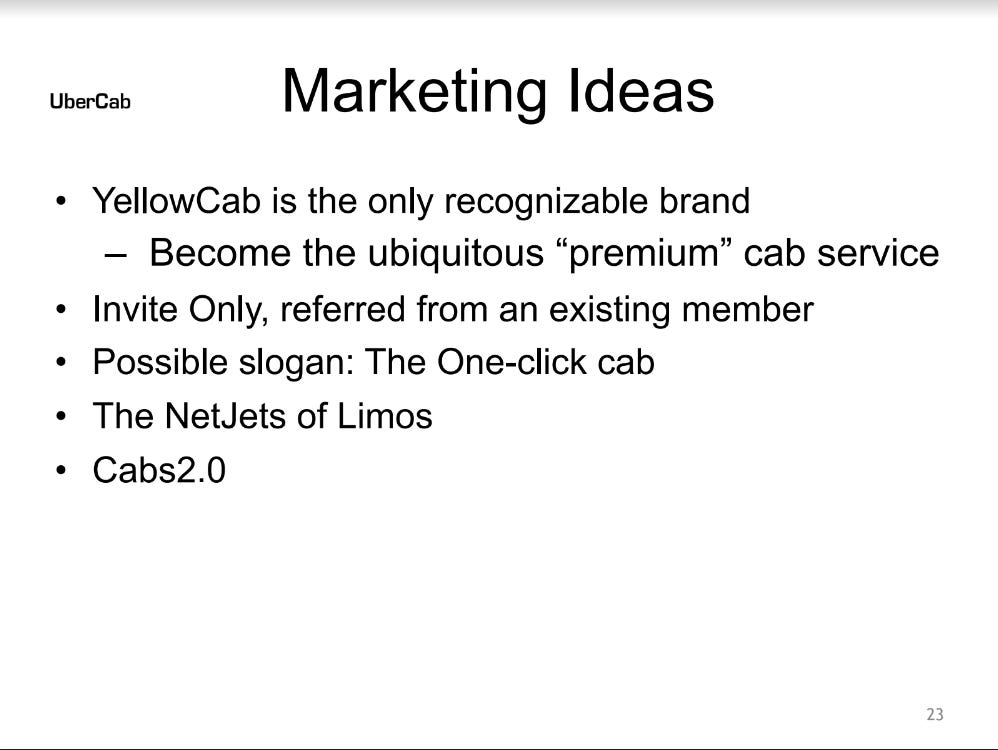 Referrals are still a big part of Uber's business, but not all of these caught on. 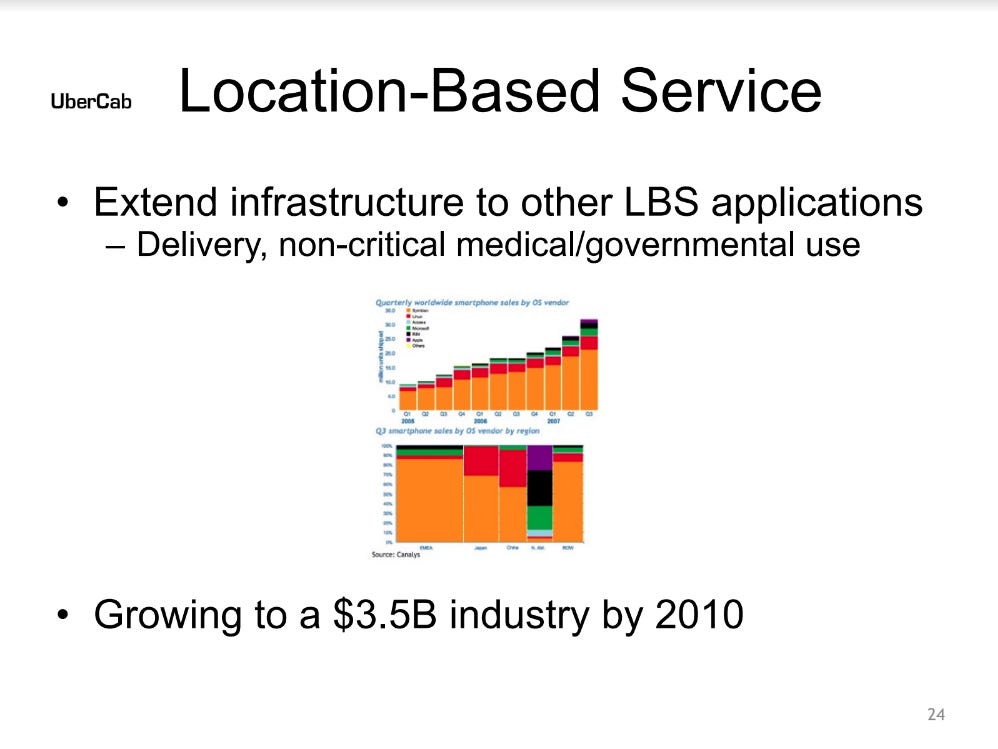 Uber had its eyes on medical or governmental transportation, but its exploration ended up going in other directions.

Healthcare is still around, though. Uber Health was announced in March 2018 as a way to provide "reliable, comfortable transportation for patients." It could be a big area for both Uber and its competitor Lyft, which recently announced the hire of a vice president for healthcare. 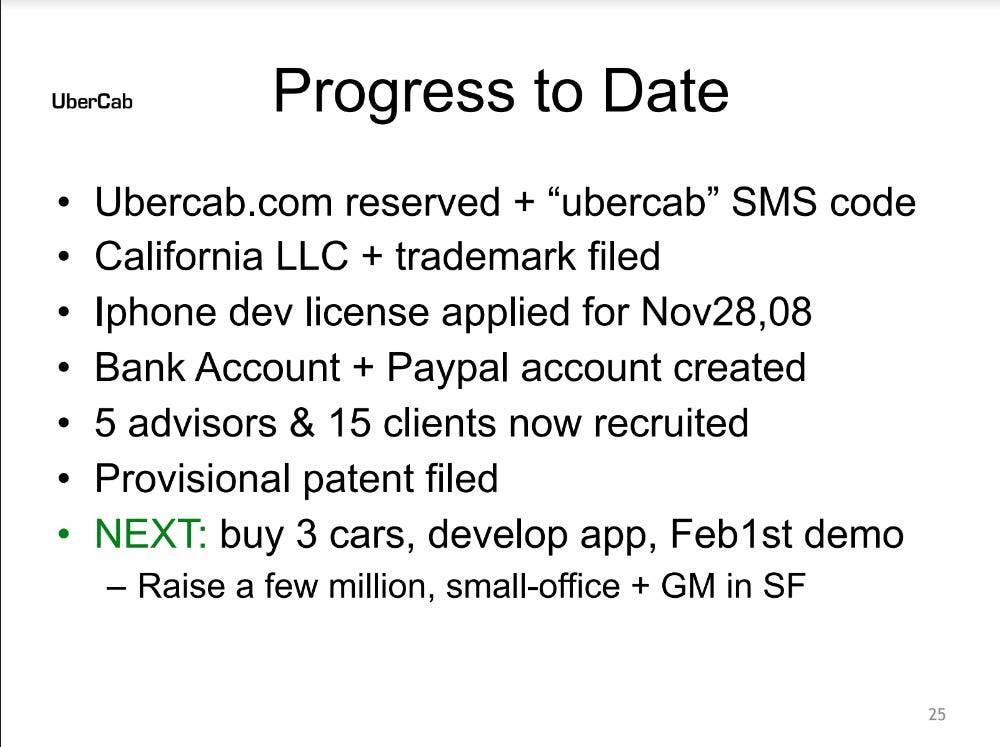 The rest is history.

Uber launched an Android version of its app two years later in 2010, when it began to rebrand from UberCab to Uber. Axel Springer, Insider Inc.'s parent company, is an investor in Uber.