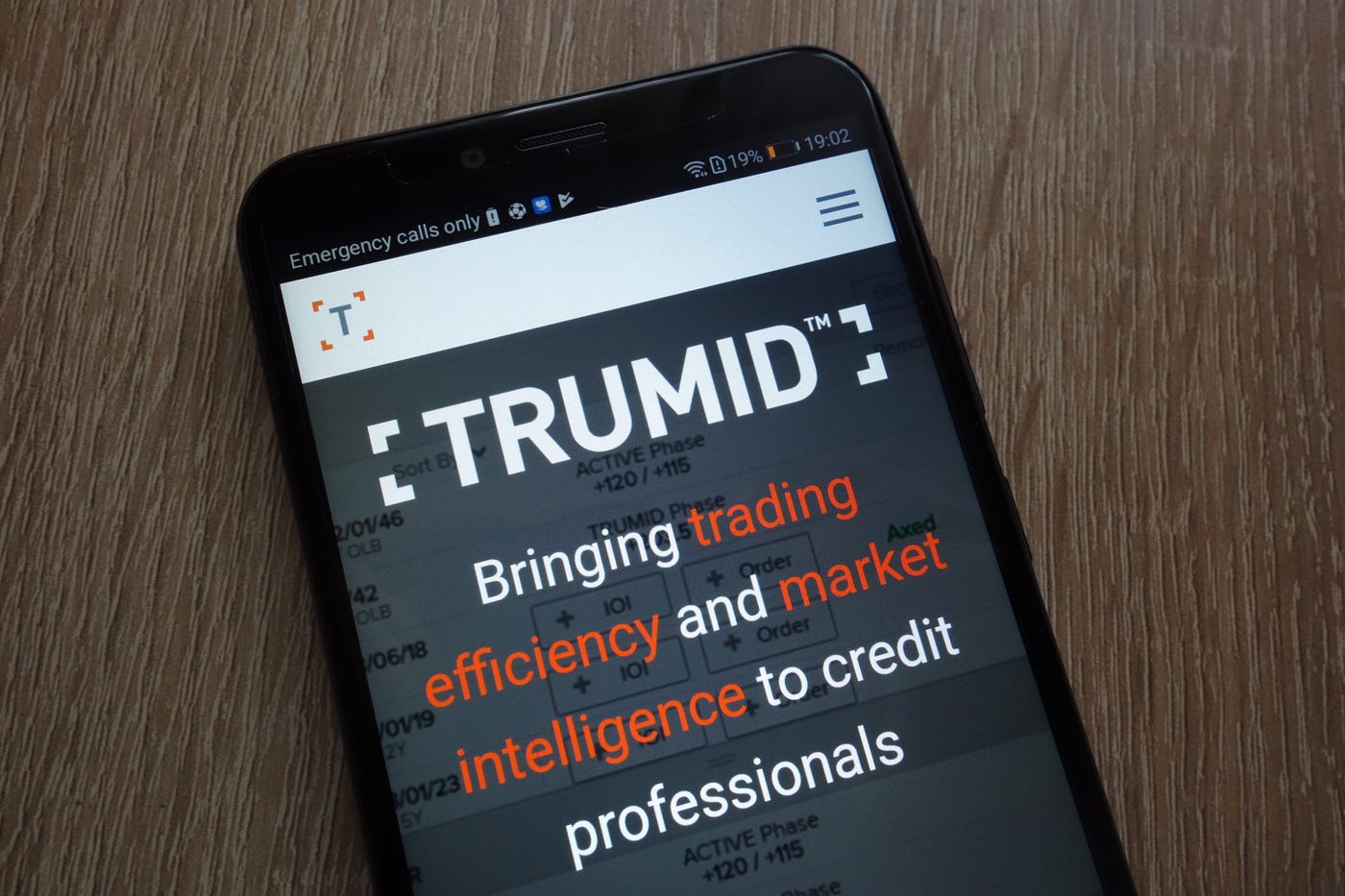 Business Insider got a look at Trumid’s investor presentation, which gives an inside look at what it’s like to start a venue that matches bond buyers and sellers using technology. As you can see from the slides, it’s not easy. Volumes, at least in the beginning, can be hard to find.

Nonetheless, Trumid landed $53 million from stock exchanges in Germany and Singapore in last year’s fundraising round, according to a company statement. The Asia exchange signed on as the lead investor to help fuel the startup’s push into that region. The size of the round was later increased to $60 million, according to a regulatory filing.

Already backed by Peter Thiel and George Soros, the company declined to comment on whether the billionaire investors participated in this round. A person close to the startup said it continues to enjoy financial support from its early investors.

Trumid looks to be one of the survivors in what has been a multiyear period of expansion and consolidation among dozens of electronic trading startups. Many were started by Wall Street traders disrupted by new technologies and shrinking trading desks.

The startup specializes in a type of corporate bond trade that’s bigger than $5 million, which can be difficult for investors to execute on electronic platforms, according to a March 2018 report from research firm Greenwich Associates. While these large trades only make up 1% of the total orders in the market on a given day, they make up over 40% of the notional traded.

While we obtained the pitch deck without Trumid’s help, the company provided some updated figures. 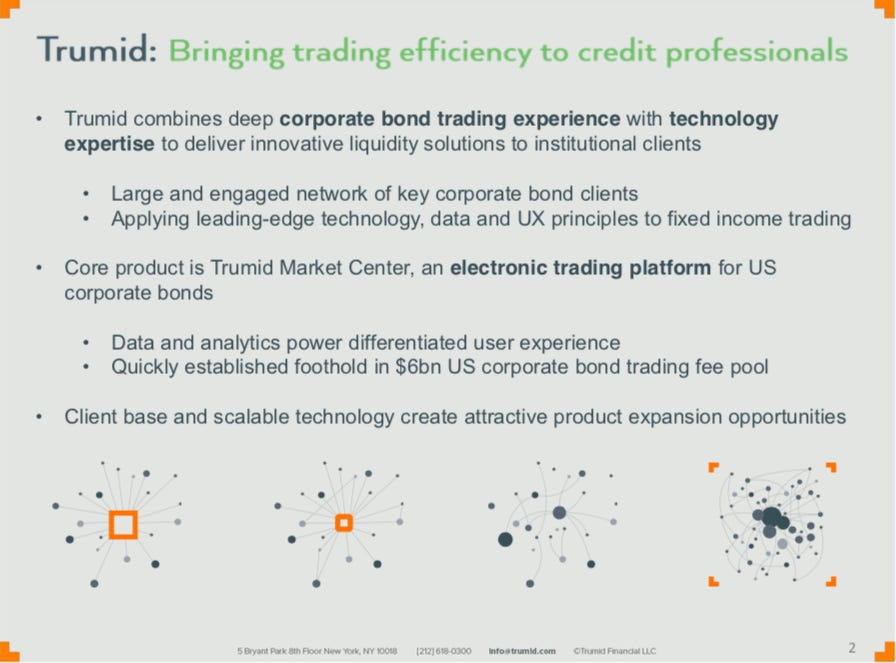 Here, Trumid explains how it fits into the market. 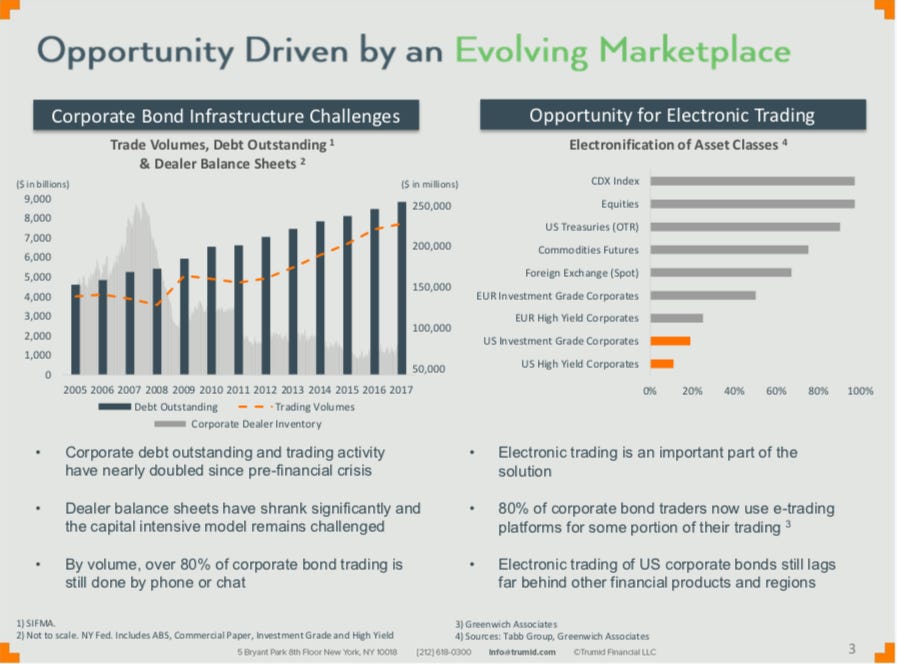 An overview of how the corporate bond market is changing and why that presents an opportunity for electronic venues like Trumid. 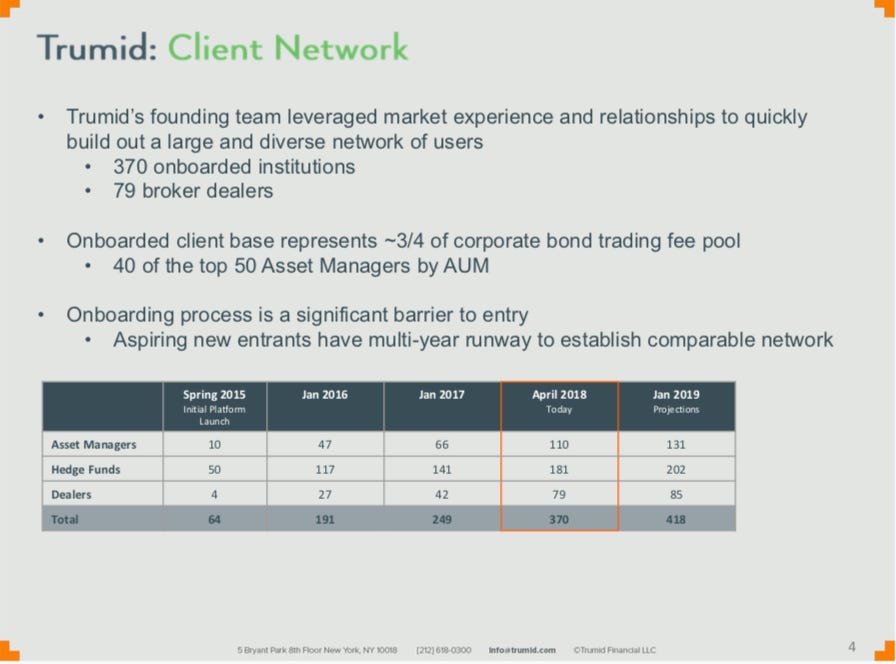 A rundown of Trumid's user base, which looks like it has grown substantially since 2015. By yearend 2018, the company had over 400 users.

The number of clients connected to the trading venue increased by 20% in 2018 over the prior year. By January 2019, the firm had 413 institutions onboarded across both the sell side and buy side. However, that missed its January 2019 projections, as shown in the above slide, by 5 firms. 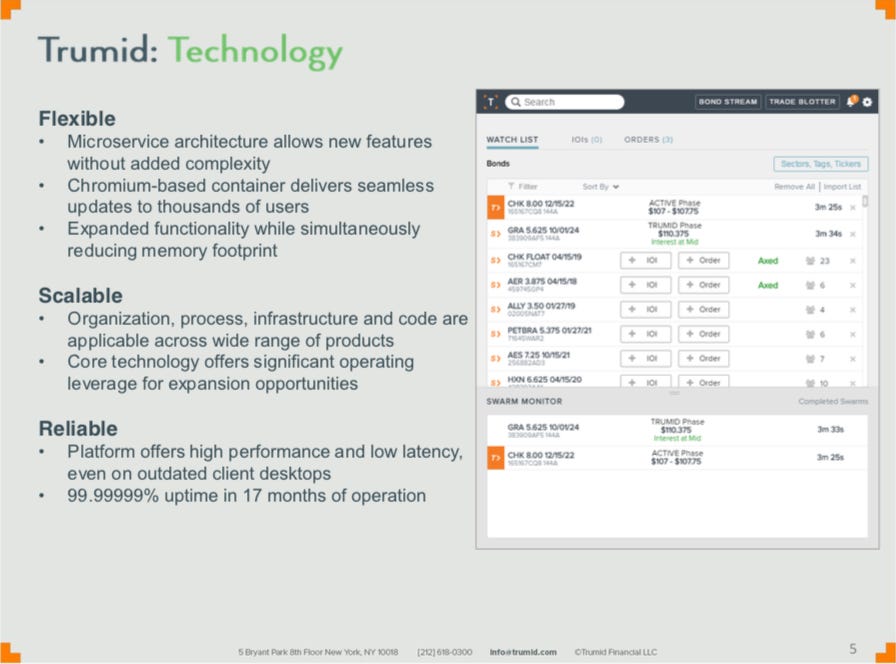 Trumid boasts about its tech prowess.

Since this slide was created, Trumid introduced a new dashboard called Trading Center 2.0 to make it easier for traders to see information and execute trades. It's also made hedging Treasuries more flexible and expanded its involvement in the new issue market. 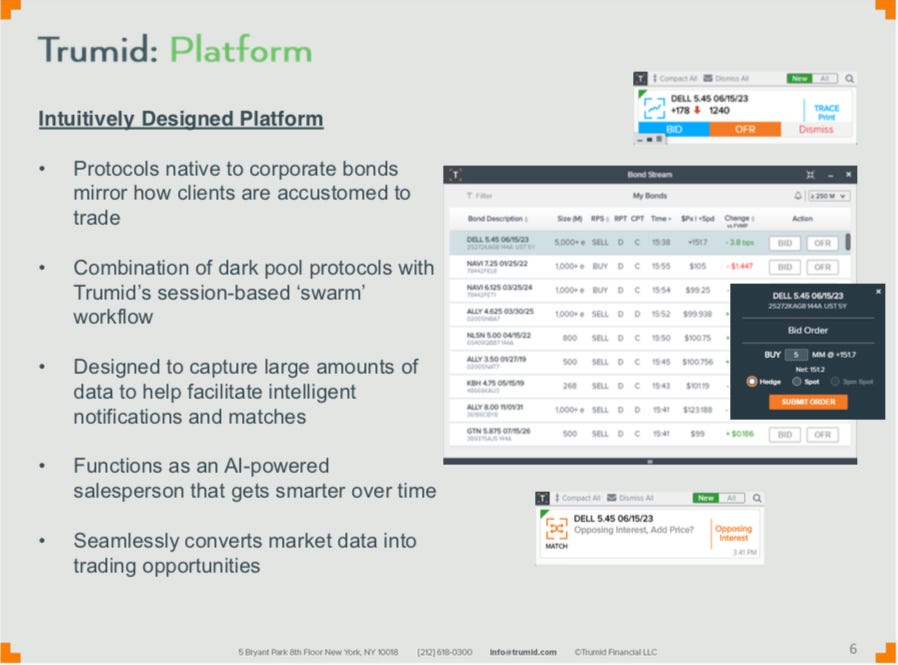 In this slide, Trumid discusses its trading venue, which tries to mirror the way that bond traders work on other platforms. It also includes artificial-intelligence techniques. 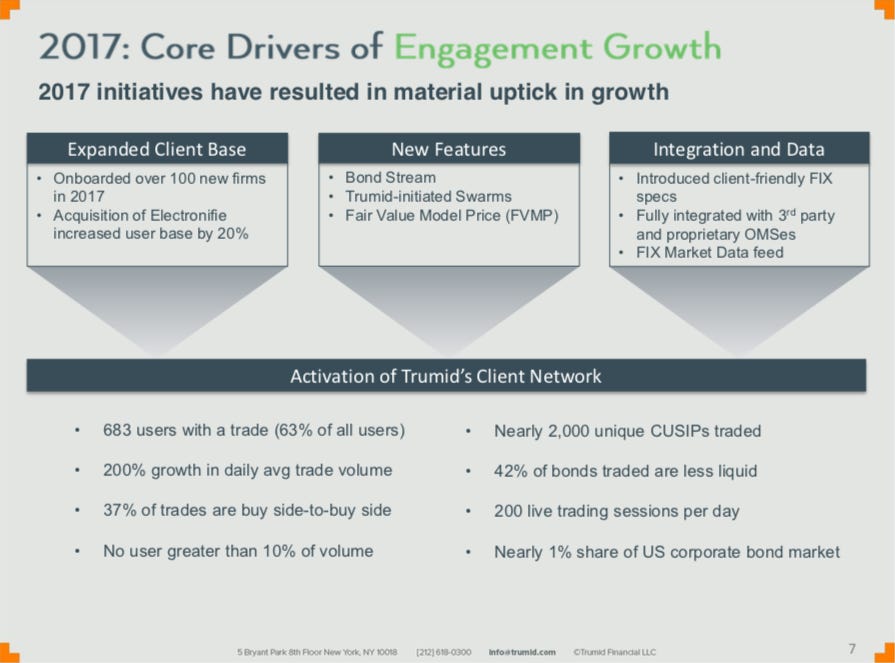 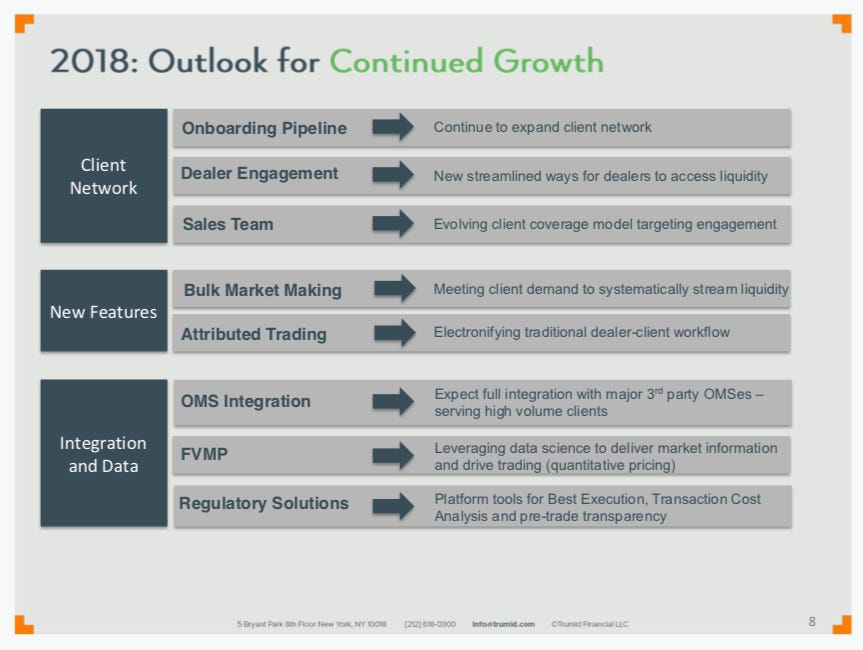 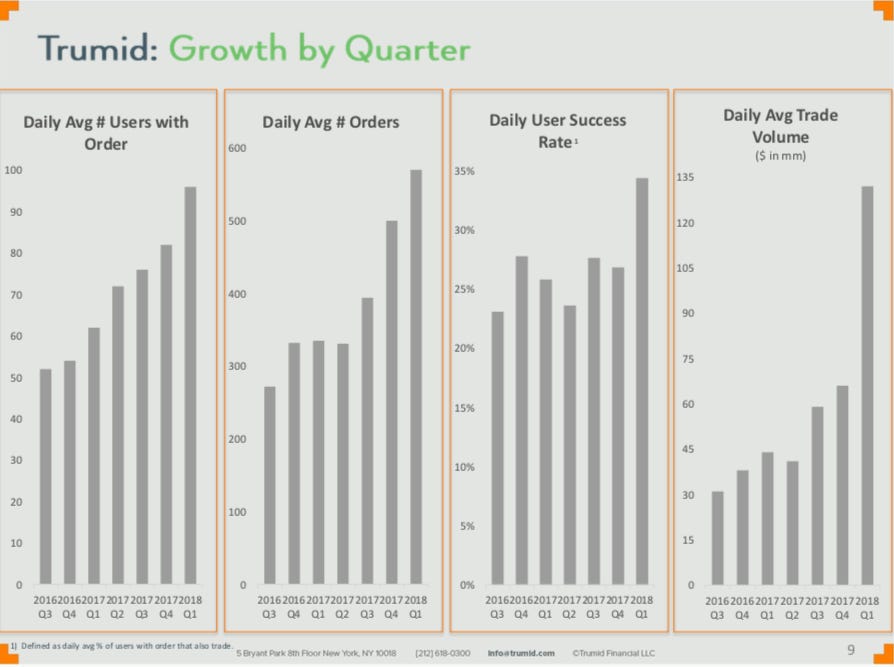 All sorts of numbers going in the right direction. 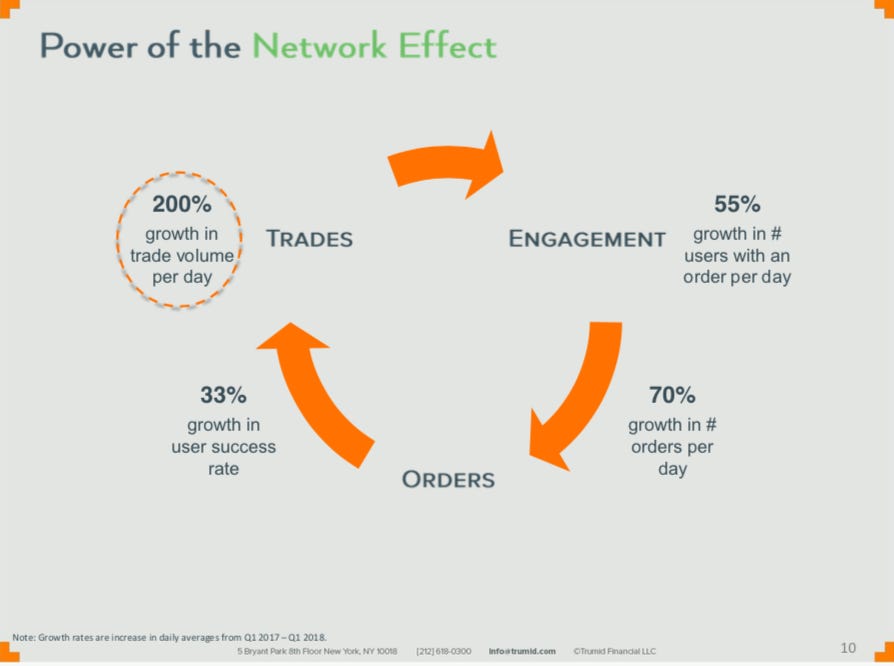 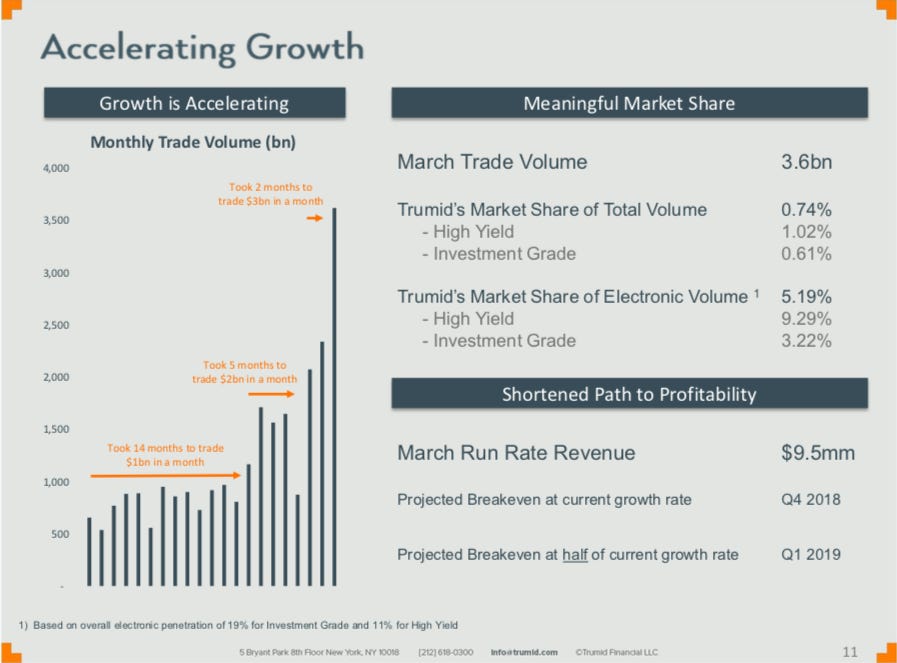 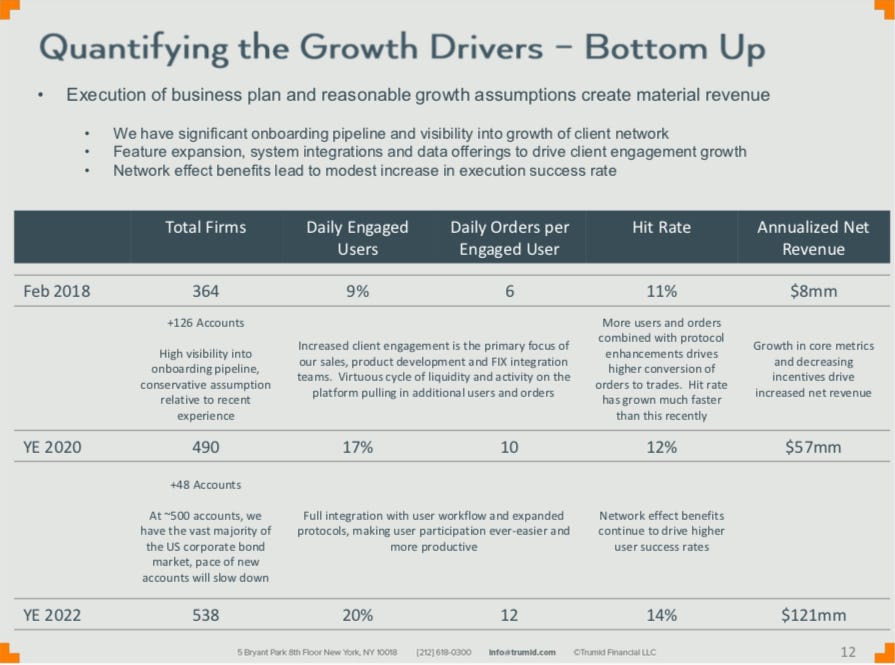 This slide shows how Trumid's enterprise value may increase to $3.1 billion on net revenue of $163 million in an environment where at least 40% of corporate bonds trade electronically. 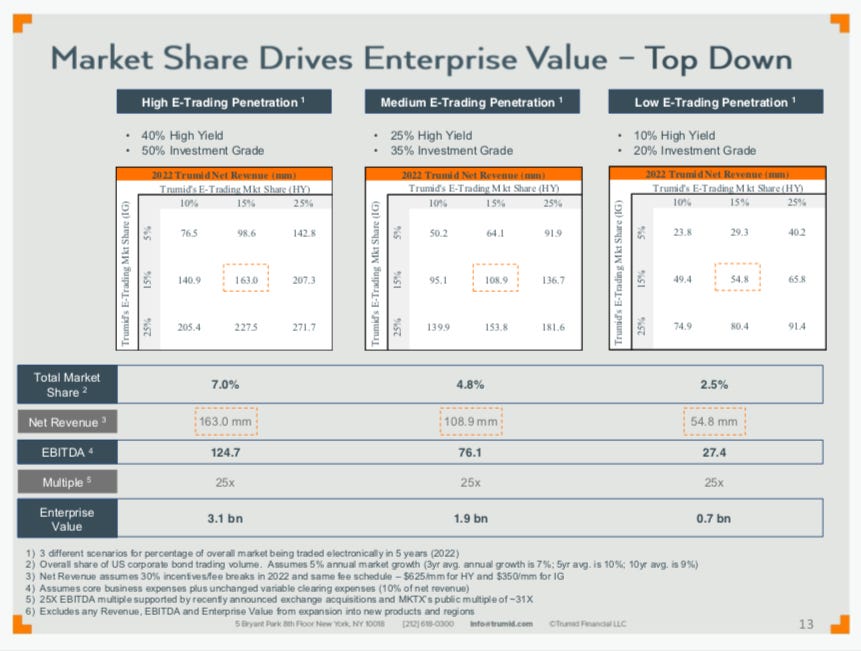 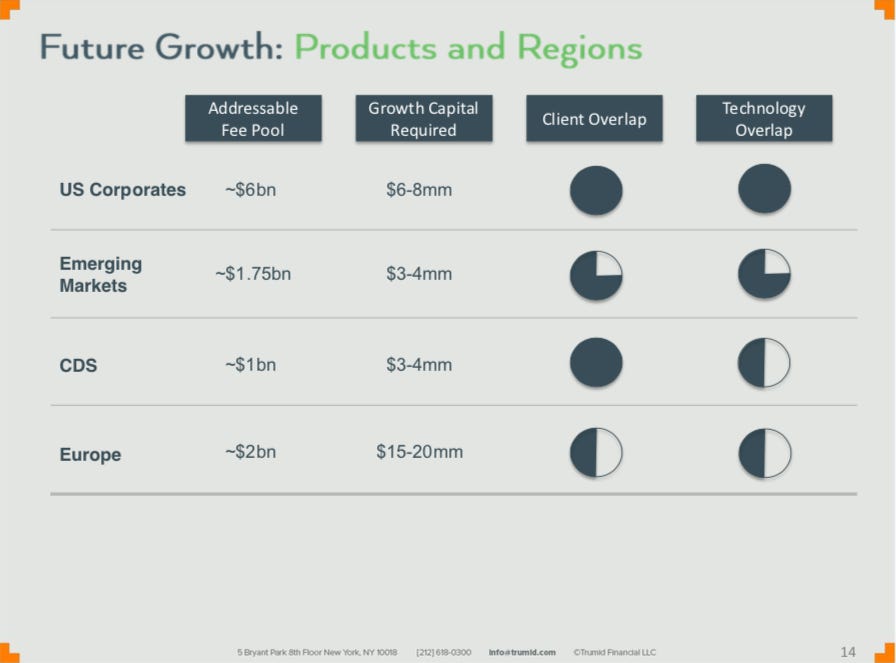 Emerging market debt gets a special call out, with Trumid expecting a 1% market share within the first two years. 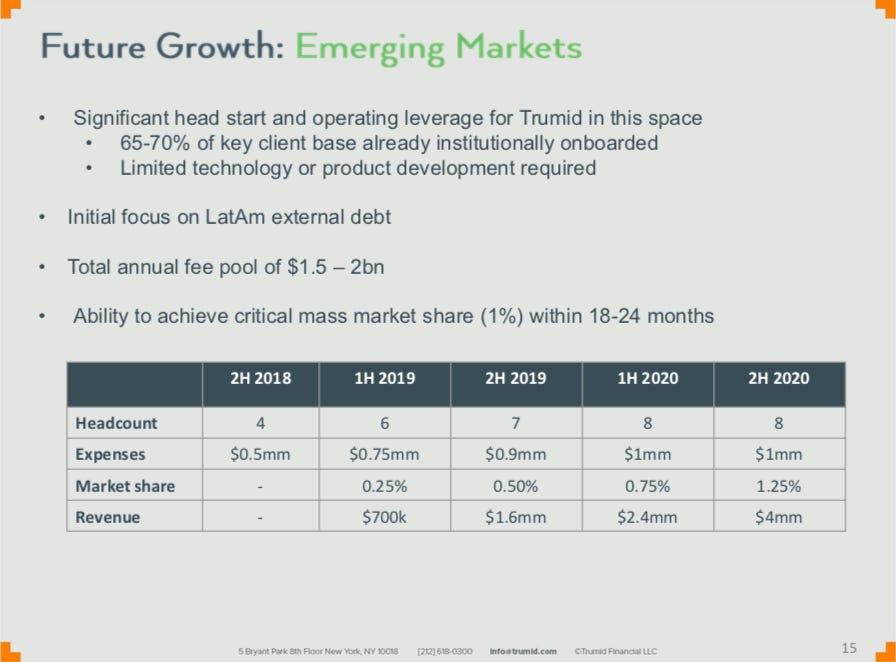 One of the key promises of electronic trading is the amount of data it produces and the ability to deliver analytics that can come up with new insights. 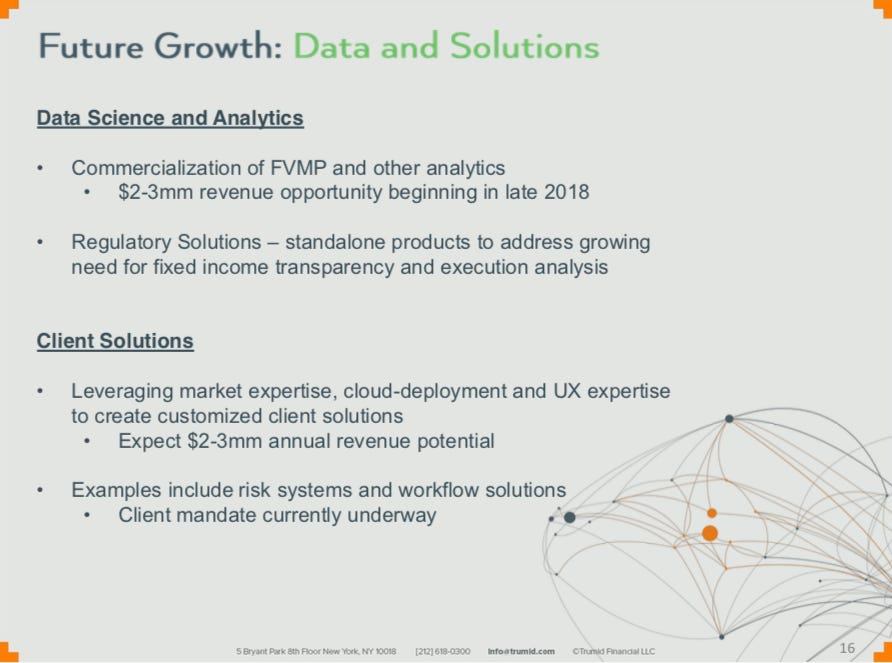 No surprise that Trumid sees the commercialization of analytics as a growth area that could mean as much as $3 million by late 2018. Interestingly, the deck also mentions some regulatory solutions.