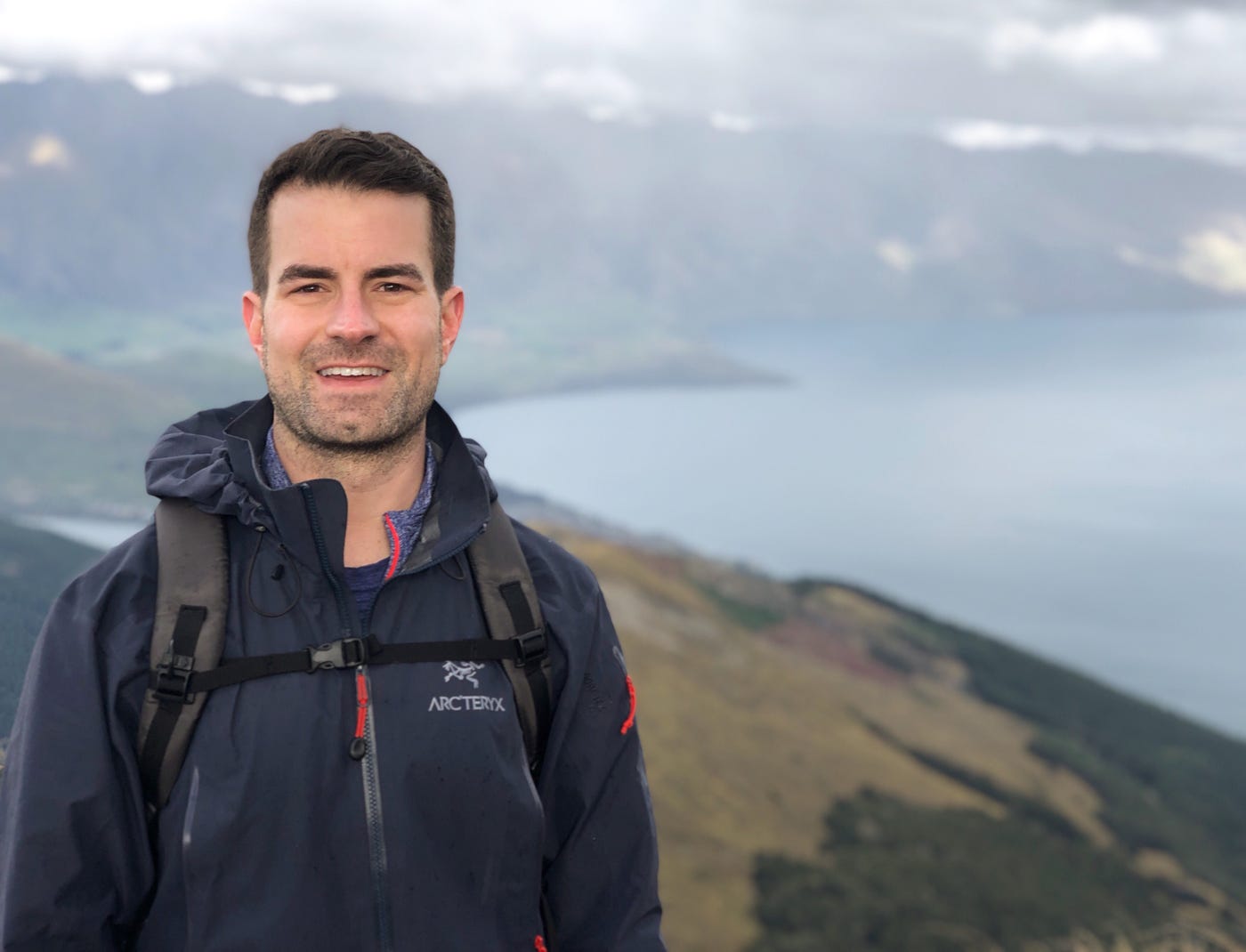 While Stuart Wall was a student at Harvard Business School, he thought he’d help his older sister promote her pottery studio back home in Indiana by buying ads on Google.

The result, he told Business Insider in an interview this week, was a disaster.

“It was super-complicated and a total waste of money,” Wall said.

But the marketing effort wasn’t a complete loss, at least not for Wall. The experience helped give him an idea for a startup that would help small businesses like his sister’s studio with marketing. So he formed Signpost to help such companies find new customers and retain the ones they already have.

While big corporations often have sizeable sales and marketing departments, such tasks often fall to the business owner — or to no one at all — in small companies. Many such companies simply don’t have the people or resources to keep close track of or market to their customers, Wall said. Nor have there been a lot of marketing or customer retention tools designed for such companies; Salesforce and services like it generally target much larger corporations.

That’s where Signpost fits in. Its service is designed specifically for small and medium-sized businesses. The New York company has crafted its system so that new clients can join easily — within five minutes, Wall said. Signpost creates a database of their customers from existing contact information the companies already have on file, from the phone and email interactions they have with customers, and from transaction data. It then uses that information to send messages to those customers, soliciting feedback from them after purchases and asking them to post reviews or refer the companies to their friends.

A big part of Signpost’s offering is designed to help small businesses improve their ratings on sites such as Yelp, Google, and Facebook, said Wall, the startup’s founder and CEO.

People don’t often leave reviews of businesses unless they’re particularly motivated to do so — they had awful or extraordinarily good experience; they’re family members or friends with the owner; or they own a rival business. In part, that’s because it can be difficult. The customer has to seek out a review site and then find the business on the site. But Signpost has found that consumers are much more likely to leave a review if it makes the process easier for them.

The company starts by soliciting feedback from consumers soon after their purchases or interactions with its small business clients. If they’ve had a good experience, it sends them a link to a review site that allows them, when they click on it, to immediately post their comments.

If the process of leaving a review is made that simple, “it’s remarkable …. how many people will take the time to leave that feedback,” Wall said.

On the flip side, Signpost tries to head off customers from leaving negative reviews on such sites. When customers respond to the initial feedback email by saying they’ve had bad experiences, Signpost directs them back to the companies with which they interacted, so that the business owners can try to address what went wrong in private before the consumers post negative reviews.

“It’s our belief that in a lot of cases when someone has a bad experience, they want someone to hear them, they want their voice to be heard,” Wall said. “We’ll detect negativity before it manifests itself online,” he continued, “and we give the business owner an opportunity to fix it and improve their business.”

Signpost has focused on ratings and reviews, because it’s found that small businesses see a much better return on their investment in terms of attracting and retaining customers when they make an effort to improve them instead of investing in ads on Google, he said. In fact, improving such ratings helps make Google ads more effective, he said. Customers can get turned off if they search for a business and see that it has bad ratings.

Reviews and ratings and soliciting customer feedback is “table-stakes marketing,” he said. “You need to have good reviews online,” he continued. “That’s becoming the dominant mechanism that people [use to] find you.”

Founded in 2010, Signpost has accumulated a massive database of consumers — some 70 million. It doesn’t allow clients to view or market to their competitors’ customers, Wall said. But they can benefit from that huge trove in other ways. A business may only have a customer’s name from a transaction. But if that person is in Signpost’s database, the business might be able to gain access to the customer’s email address or phone number and use that information to send the customer follow-up marketing messages or offers.

The company, which offers its service throughout the US, has found a ready audience. It now has more than 10,000 business clients overall and has found particular traction among services business, such as real-brokers, contractors, and fitness centers, Wall said.

Also read: This VC firm managing $500 million in assets tries to invest in as few companies as possible. And it only wants startups with management teams looking for help.

Signpost charges customers between $200 and $400 a month per location for its service, depending on the number of features they choose. In the first quarter, the company hit break even on a cash flow basis, and its core business was growing at a 43% annual rate, Wall said.

The company, which now has about 200 people, could get even bigger soon. Last month, it raised $52 million in a late-stage funding round led by High Bar Partners.

Wall plans to use the money to bulk up Signpost’s sales team and to establish partnerships with companies such as newspaper publishers that will market its service to their small business customers. It also plans to add staff to its technology and product teams, he said. Wall doesn’t think Signpost needs to add a lot of new features to its service, but he hopes to keep improving what it already does.

Attracting, tracking, and retaining customers “is a big problem for local businesses,” he said. “I think there’s going to be a billion-dollar company that solves that problem in the next five years, and obviously, I want it to be us.”

Here’s the pitch deck Signpost used to raise its recent funding round: 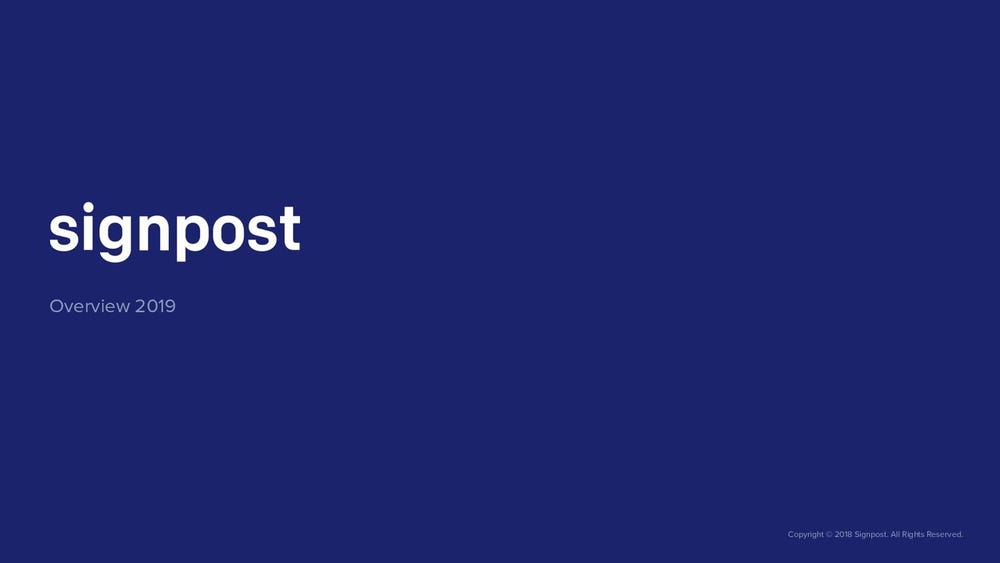 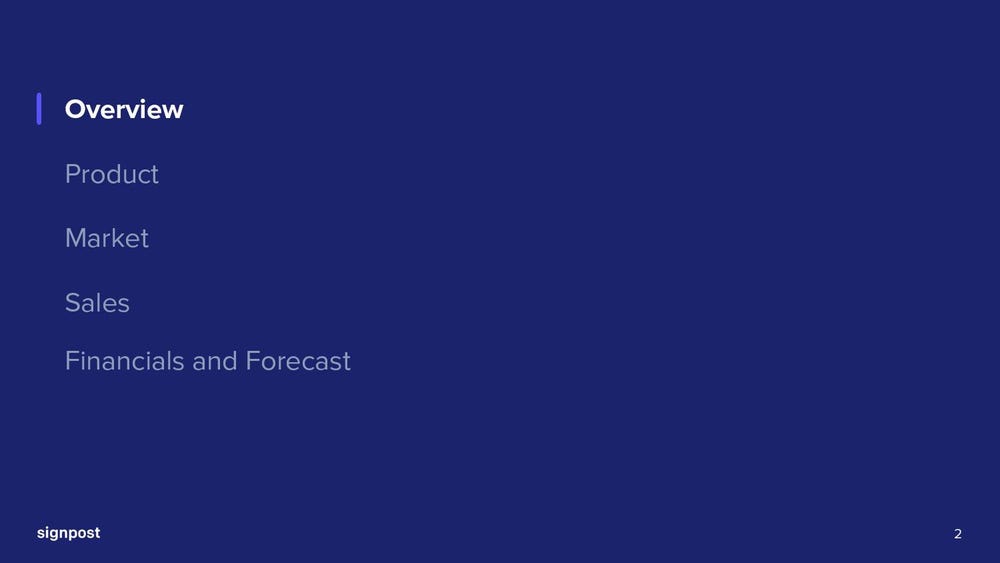 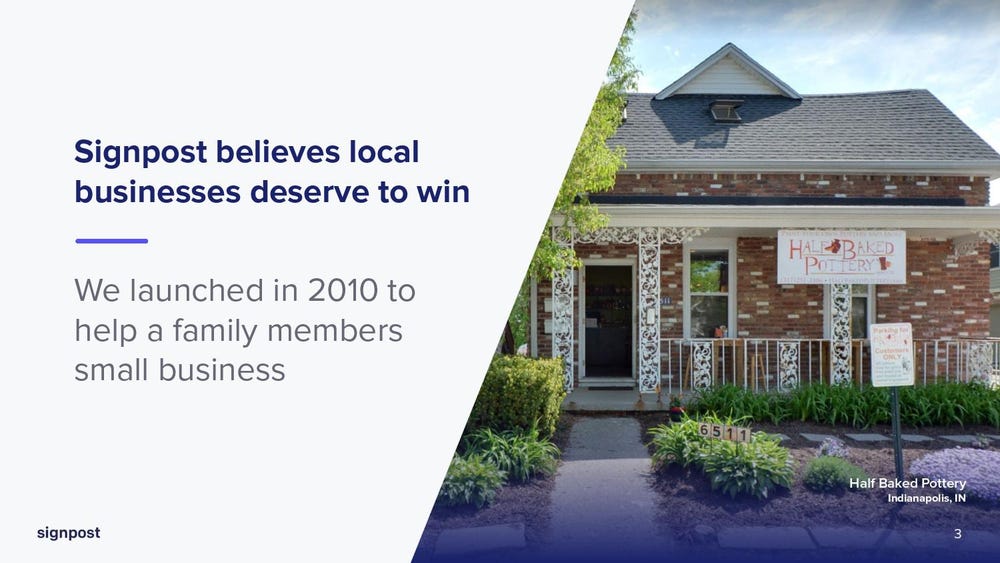 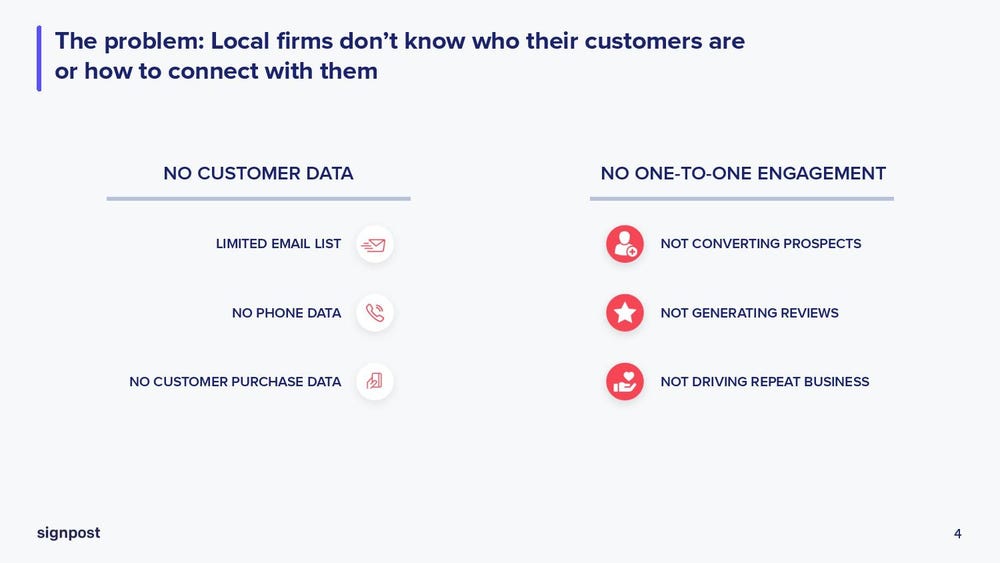 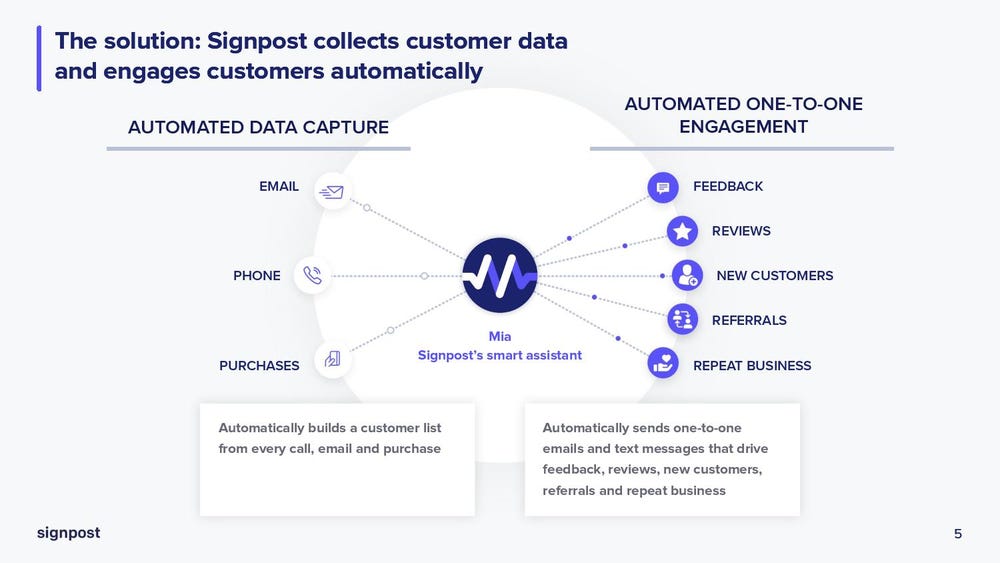 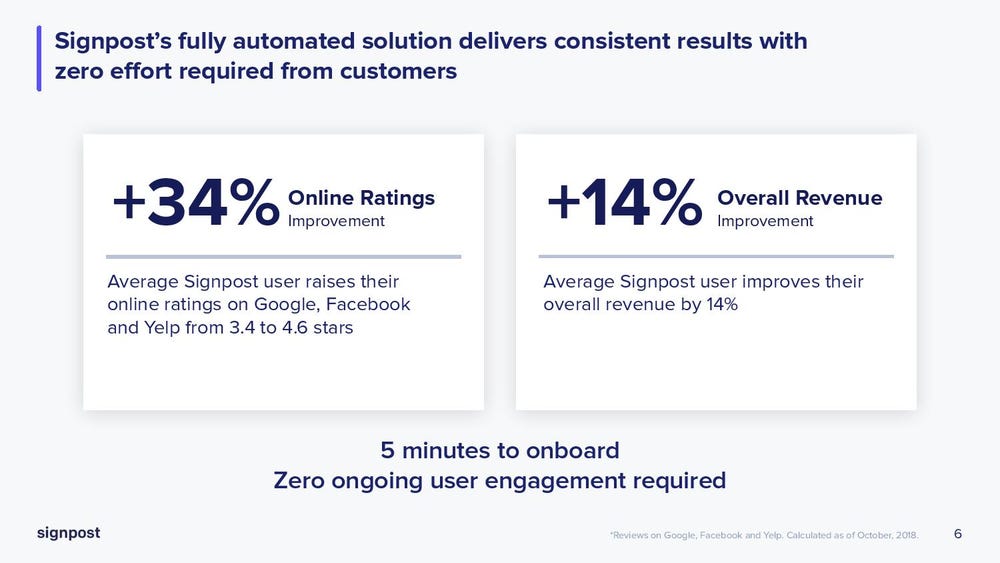 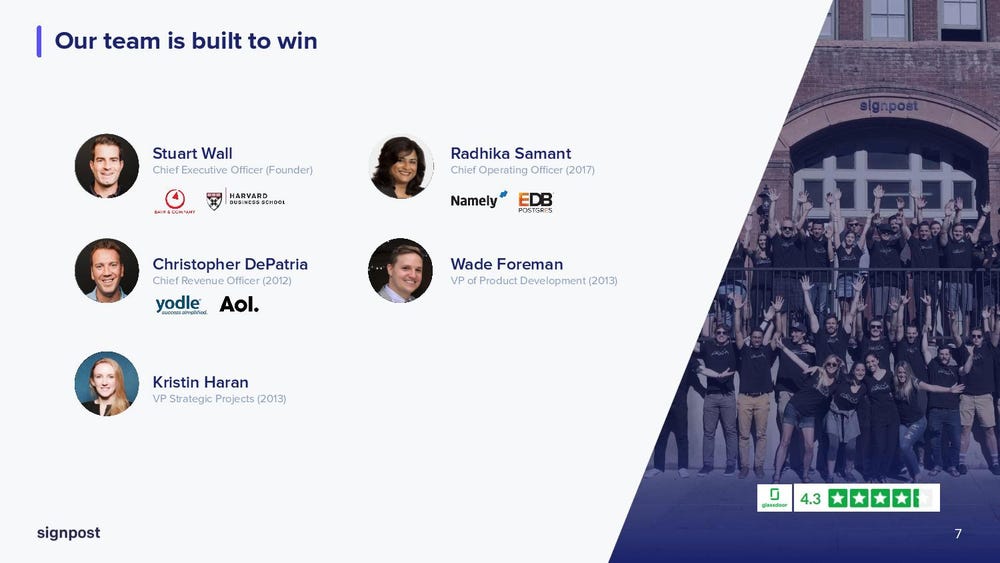 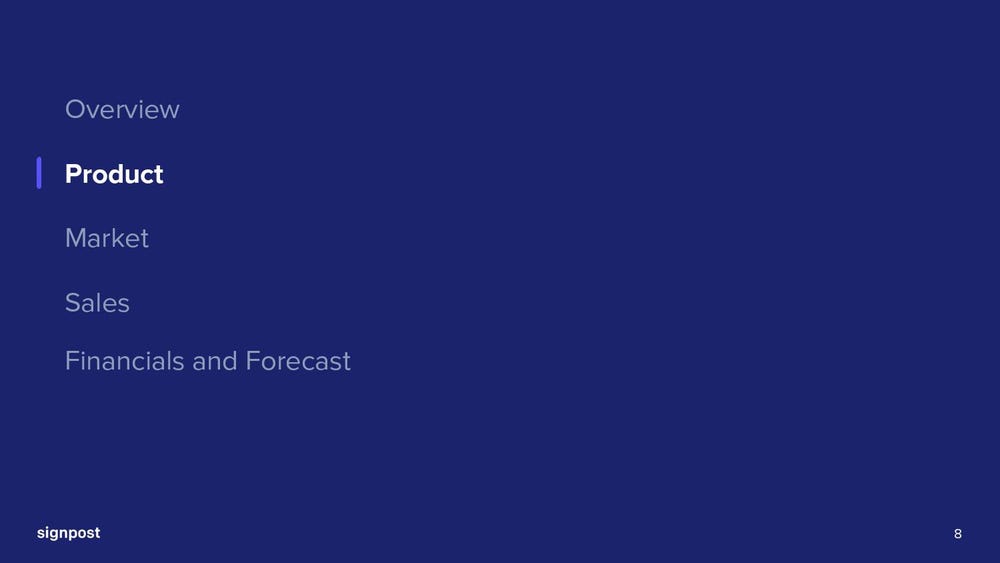 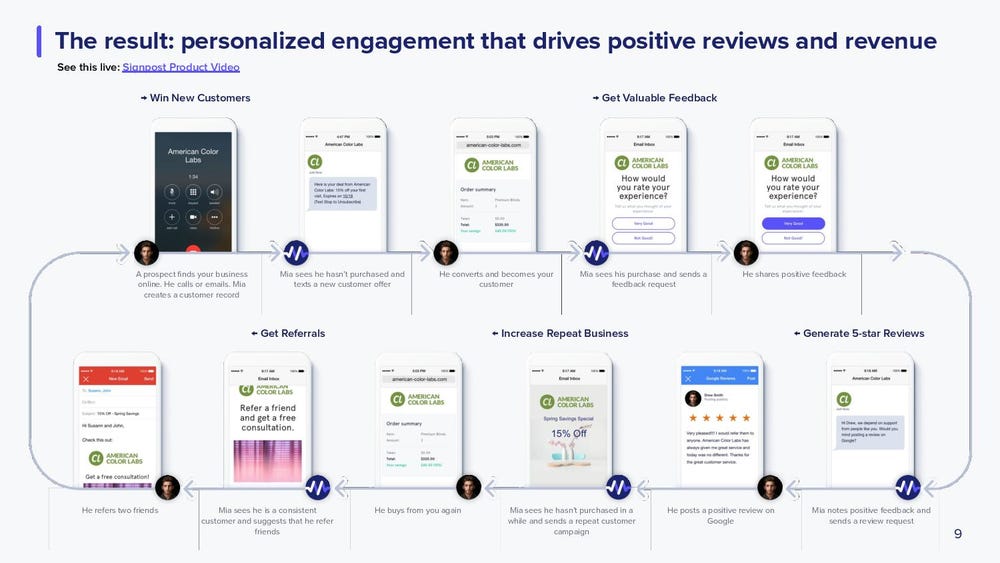 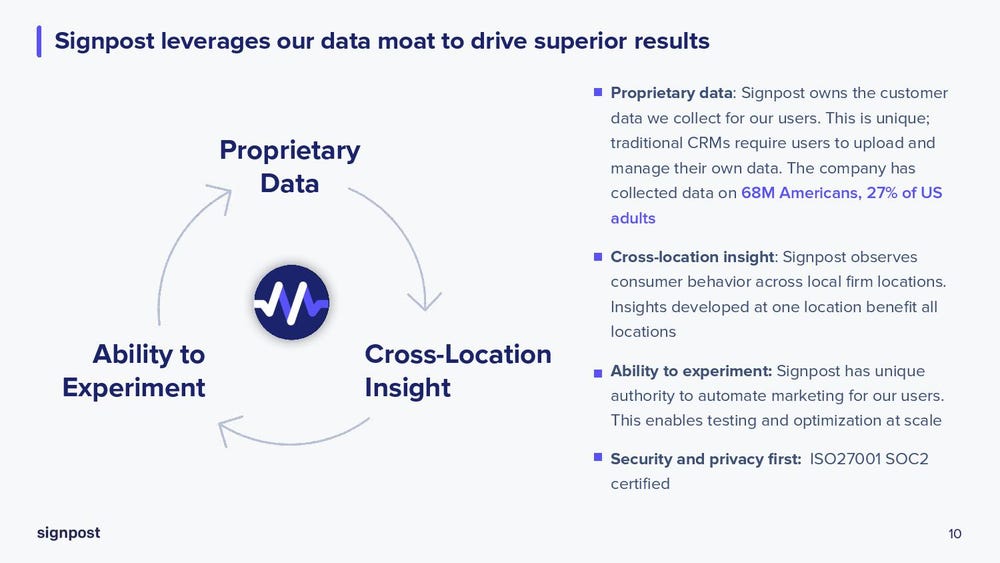 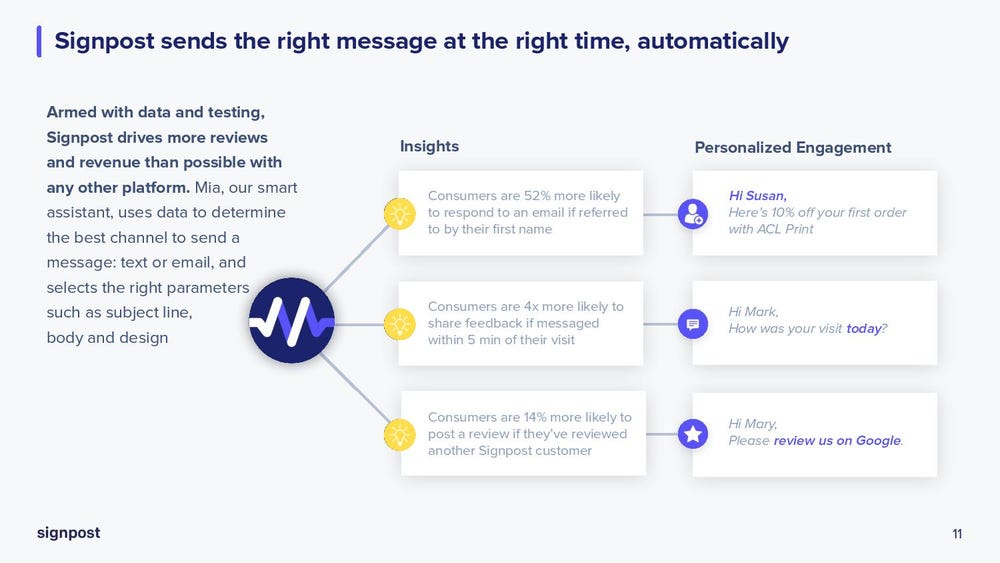 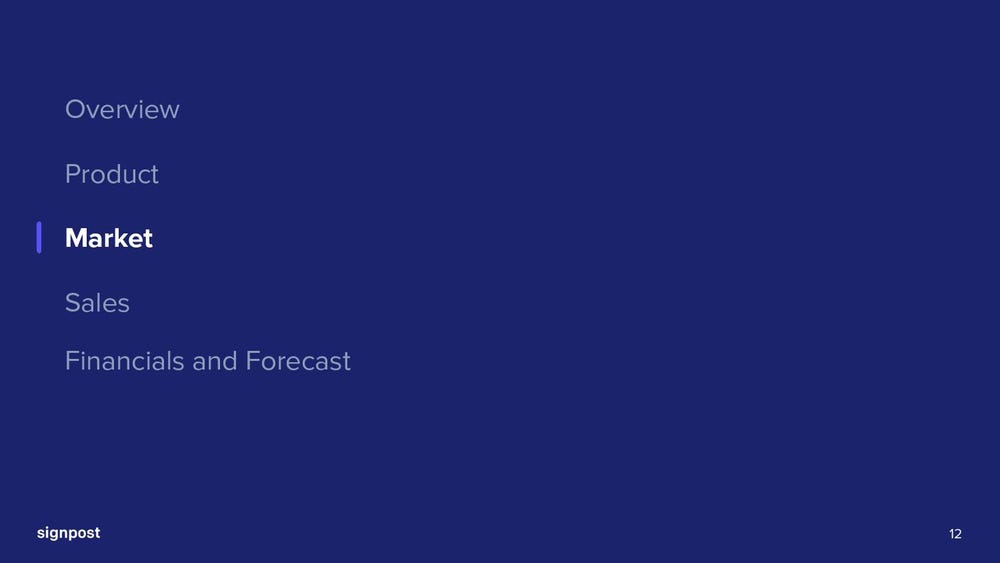 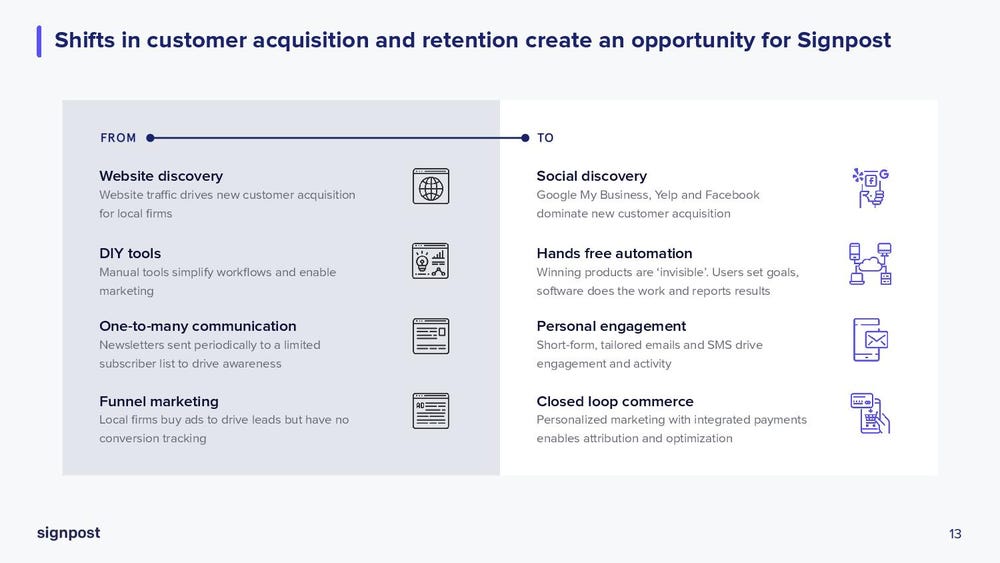 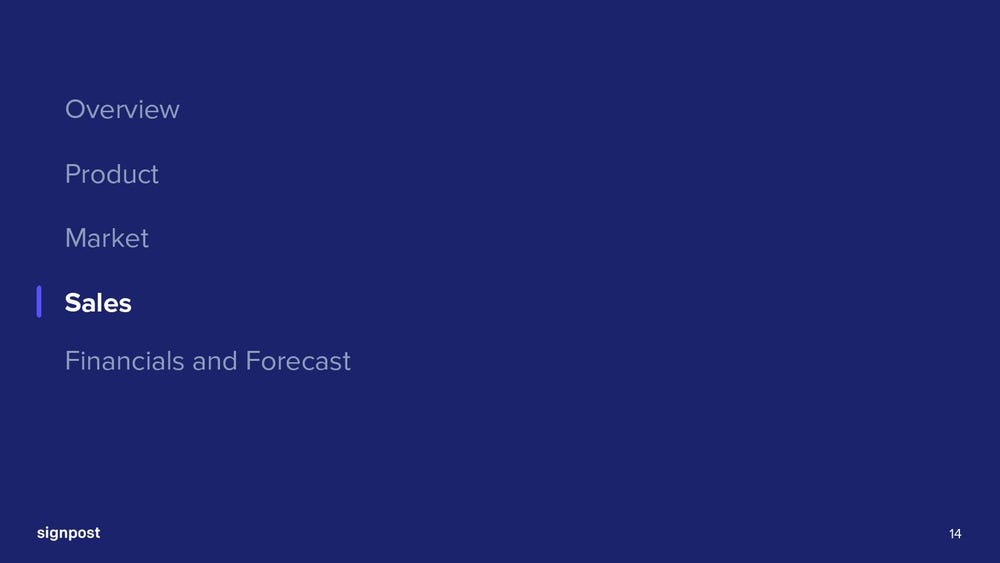 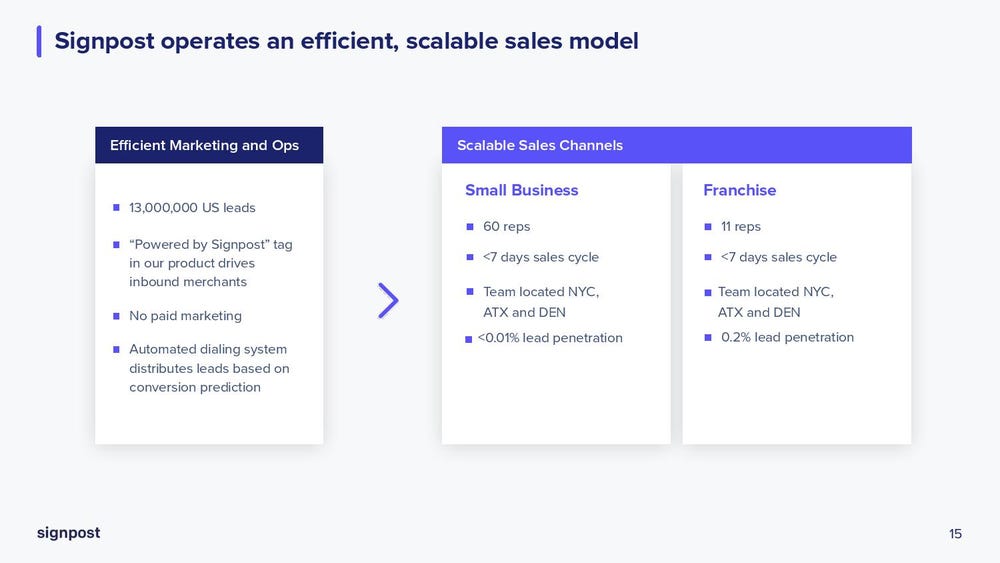 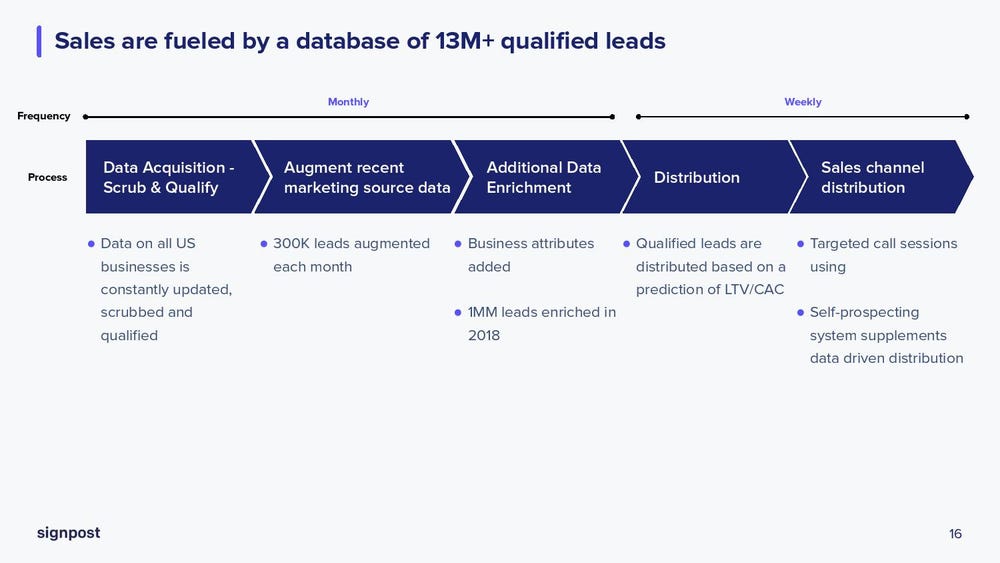 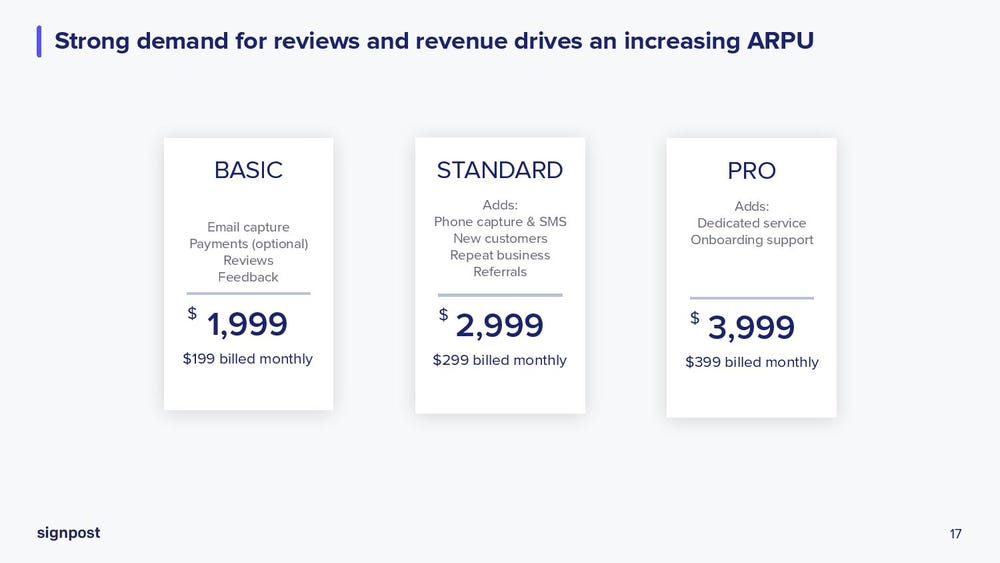 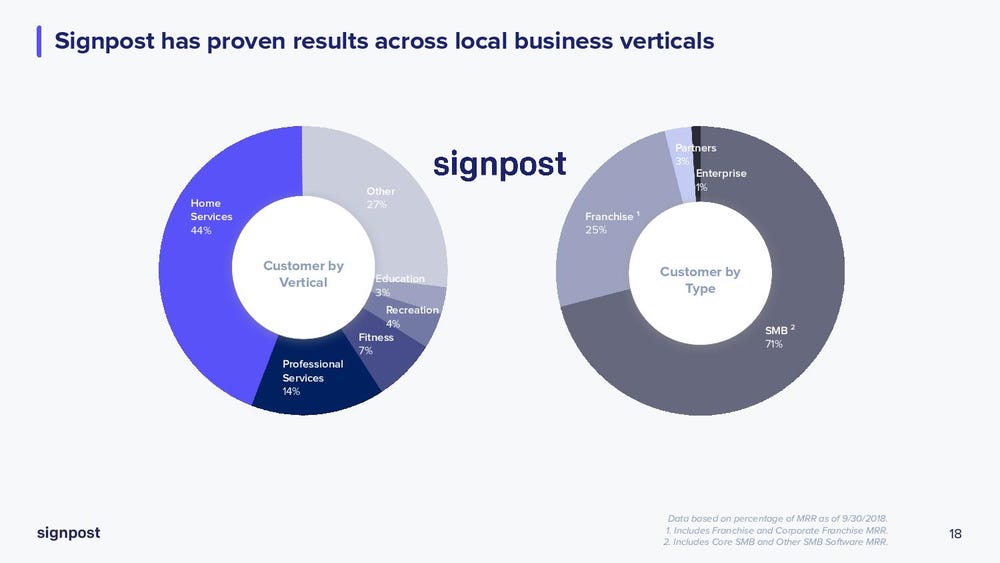 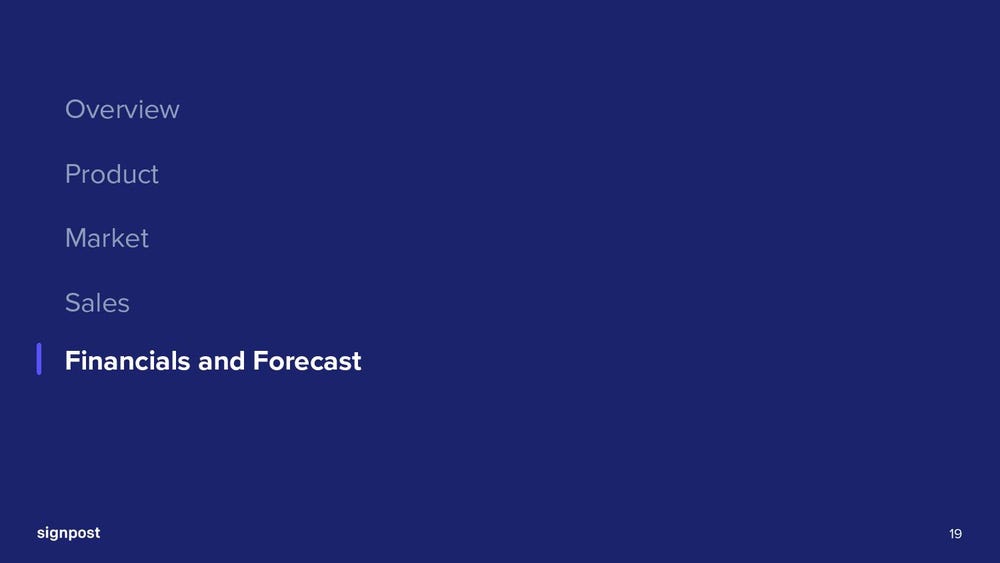