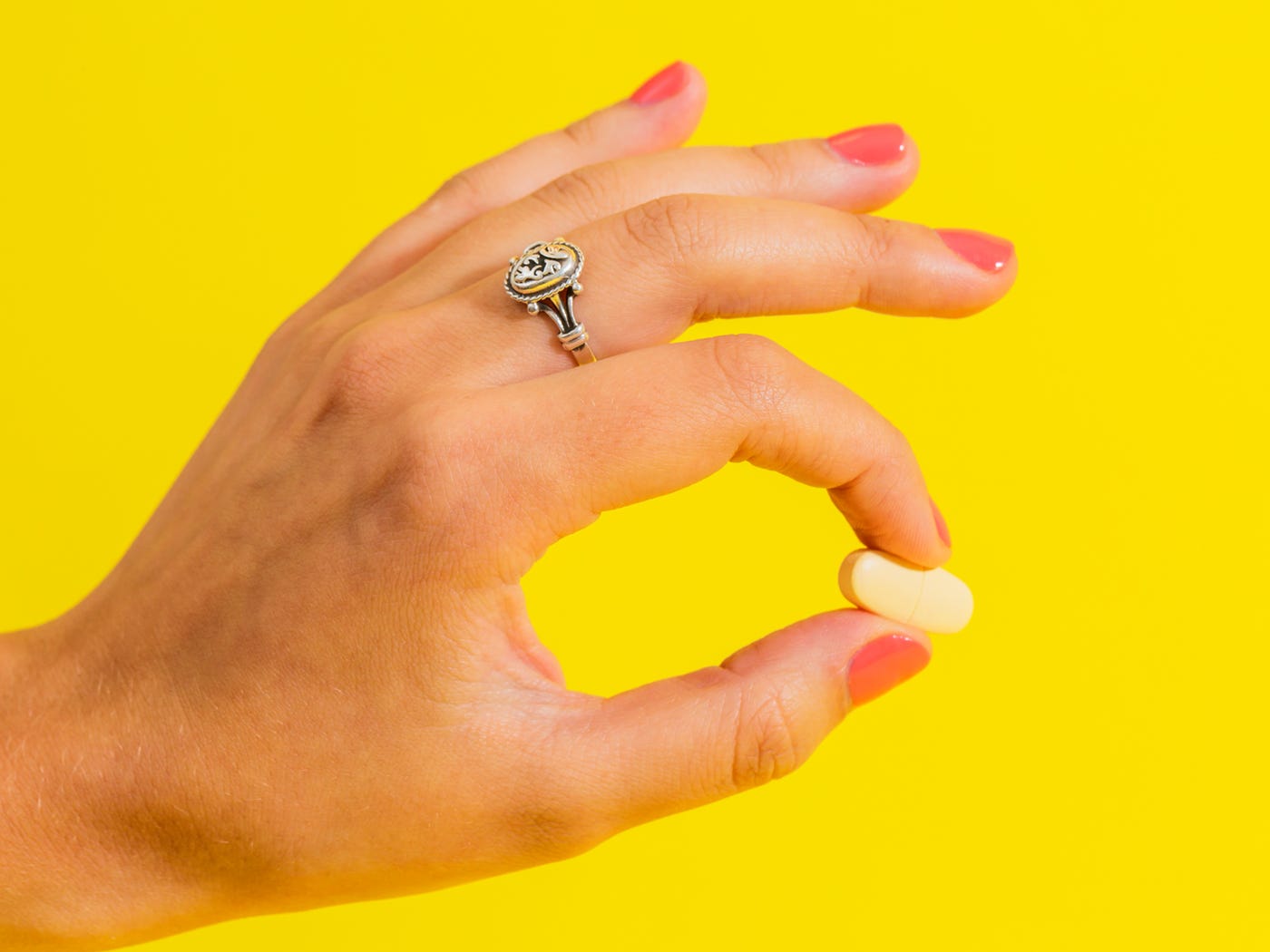 Early in her career in healthcare, Anurati Mathur started thinking that the US system’s approach to costs was all wrong.

Then she had a personal brush with it at the pharmacy counter. Mathur went to pick up a prescription, but it turned out to be prohibitively expensive. So instead of purchasing it, she left it there.

The pharmacy kept calling her, telling her that the prescription was ready. But “you’re not really addressing the root cause of why I’m not getting the prescription, which is cost,” she says.

That’s the driving ambition behind health-tech startup Sempre Health, which Mathur co-founded at the end of 2015 with Swaraj Banerjee, a onetime Zynga engineer. Mathur, 30, is now Sempre’s CEO and Banerjee, 29, is its chief technology officer. (The two married last year.)

Sempre has raised $10.5 million in its seed and Series A rounds, and its valuation hasn’t been disclosed. The startup isn’t currently fundraising, so the pitch deck is a “starting point” for conversations with any investor, Mathur said. The pitch deck, which was provided by Sempre, is new and will be the basis for those conversations moving forward.

Sempre takes aim at a well-known problem with people and their pills: that they don’t always take them.

Nearly 4 billion prescriptions are written in the US each year, but one in five are never filled, and about half of those remaining aren’t taken properly, one 2017 report found. The reasons behind those stats are complex, according to that report, shaped by factors like difficulty paying, patients forgetting or not understanding how to properly take a medication, and more.

Sempre communicates with patients largely via text messages, letting them know about the discounts and when they’re available.

That tech is crucial, the startup says, because people read and respond to texts quickly, and don’t want to download an app.

“From our firsthand experience, when you ask a patient who has a million other things to worry about and should worry about to download an app— we wanted to make it really as lightweight as possible,” Wildnauer-Haigney said.

Money for the discounts comes from big-name pharma companies like Bristol-Myers Squibb, Eli Lilly, Johnson & Johnson, and AstraZeneca. The companies would otherwise use the funds for drug coupons, an industry which gives $4 billion a year to patients.

Sempre is just getting started convincing health plans and employers to sign on. Participants include large regional Blue Cross and Blue Shield health plans, with 26,000 patients under contract so far. There’s a different program with WellCare focused on Medicare.

About 20 to 30 drugs are eligible for the discounts, for chronic diseases like heart disease and diabetes. Drugmaker coupons are illegal for government programs like Medicare, so that population may not be eligible for Sempre.

The health insurer and hospital system University of Pittsburgh Medical Center, which covers 3.5 million individuals with its insurance products, is another participant. UPMC uses the discounts for four drugs — three blood thinners and one diabetes drug — with interest in an expansion to cover more drugs.

UPMC has seen the program improve how much patients take their medications. For instance, in the first year of use for the blood thinner Brilinta,which can lower the chance of an individual having another heart attack, more than 90% of prescription fills were done on time, and 95% of members took their prescriptions as intended more than 80% of the time.

“The thing I really like about it is the proactive nature of it. Think about it: People are really busy in their lives. Sometimes, with the best of intentions, you just don’t get your refills on time,” Chronis Manolis, senior vice president of pharmacy and chief pharmacy officer at UPMC, told Business Insider.

The startup plans to expand to new health insurers next. And as the Trump administration weighs getting rid of drug rebates in certain government programs, Sempre is billing its service as a potential solution, calling that a big opportunity.

There are rivals, including drug discount companies like GoodRx and Blink Health, and industry giants like McKesson, which runs copay coupon programs. Health-tech company mPulse Mobile also uses text messages to get patients to take meds on time. But Sempre is unique, Mathur says, because it works with health insurance to provide discounts and aims at improving medication adherence, too. 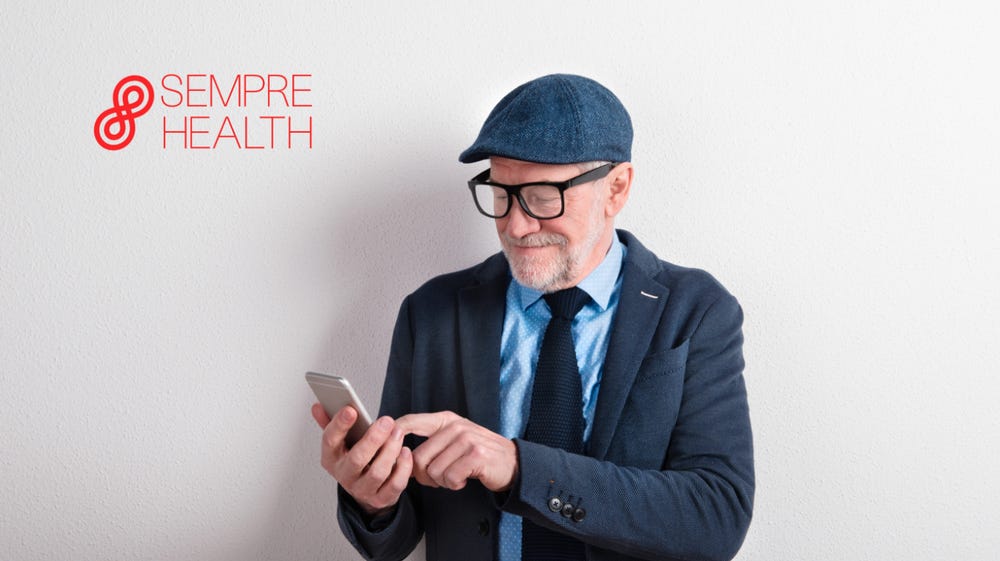 Sempre Health's pitch deck opens with this image, a nod to the way it uses text messages to communicate with patients.

Sempre works with pharma companies and health insurers to offer patients discounts for filling their prescriptions at the pharmacy on time. Once patients are enrolled in its discount program, Sempre communicates with them by way of text message and the occasional phone call about how to get cheaper prices on prescriptions. 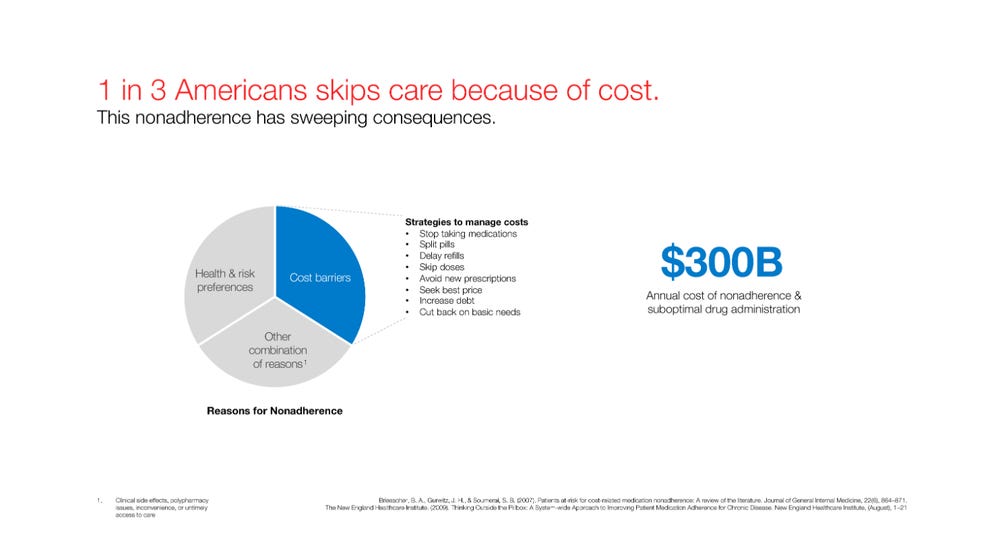 When patients don't take their medicines, it's bad for their health and can be costly for the healthcare system. Sempre emphasizes this as part of its opening pitch to investors as a problem that the startup can solve. 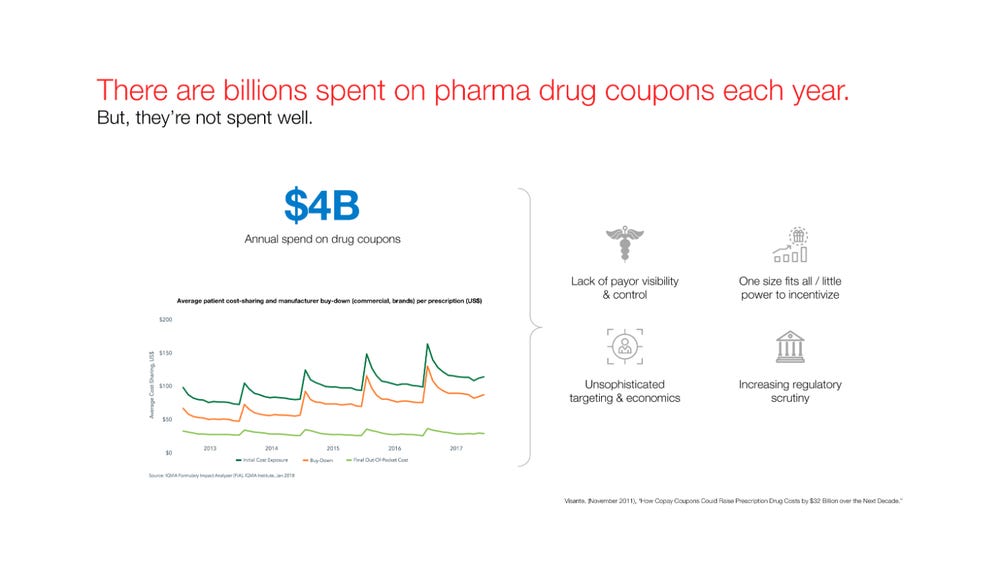 These so-called co-pay coupons are controversial. Health insurers, for instance, say they help push patients to take more expensive drugs, increasing the cost to the system. The Sempre pitch deck alludes to this divisive debate, and sets up its platform as something that can solve these problems. Putting a price tag on it, of $4 billion, is also key. With venture capital investors, "it has to be a large market to be a good deal," explains CEO Mathur. "Pitching is part of articulating that story." 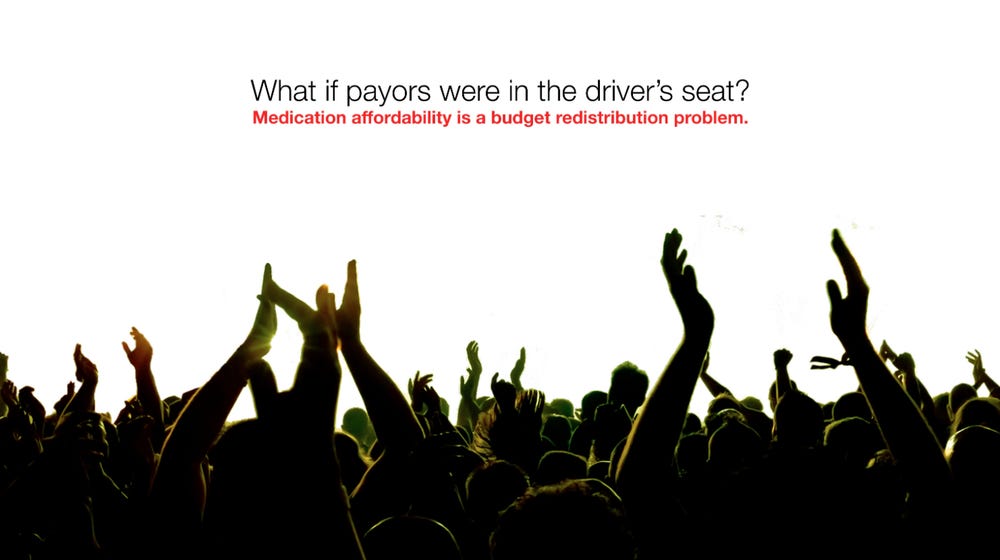 After building a case for a problem afoot in the US health system, this slide quickly sets up Sempre and its platform as a solution. 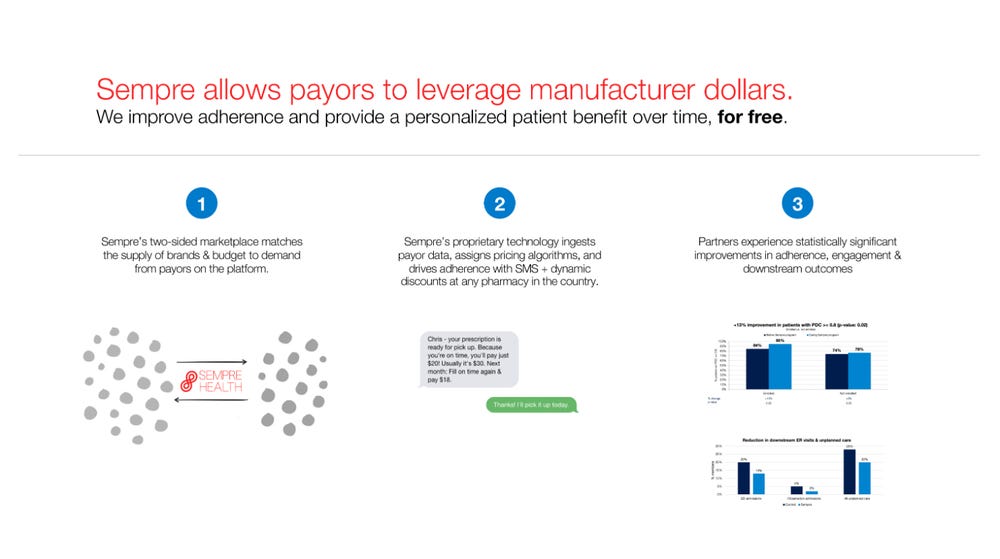 Sempre presents its product as a solution to unaffordable prescriptions keeping patients from taking their medications.

Sempre uses money that pharma companies would typically spend on co-pay coupons, and redirects it to make prescriptions cheaper for patients. 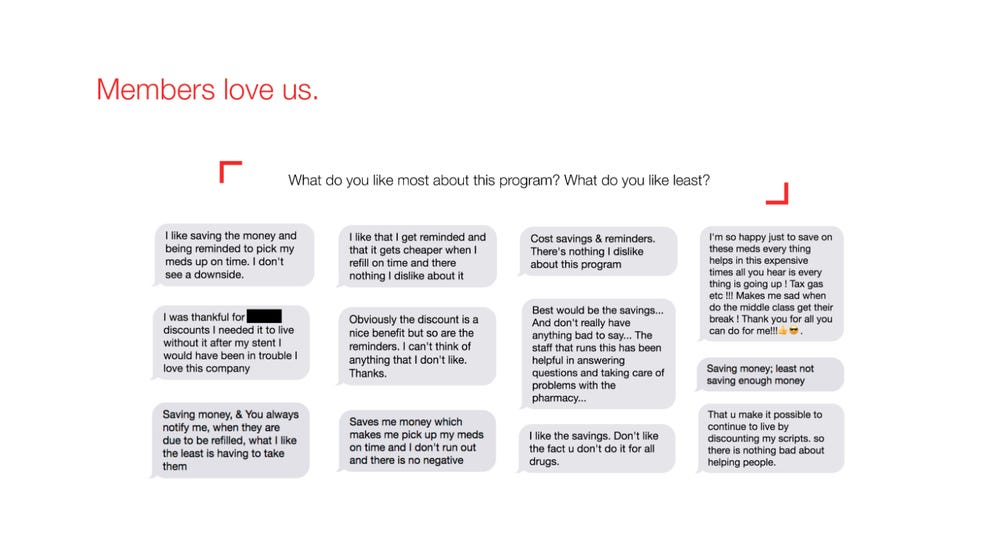 Sempre's pitch deck emphasizes that the startup is providing a valuable service for its members, or patients who benefit from the discounts.

The testimonials from members say that they like getting the discounts as well as reminders to fill their medications. Proving that the startup has traction is key, according to Mathur. Even if investors don't fully understand the space Sempre works in or the problem they're solving, it's hard to argue with the fact that people are using it and liking it. "If we can provide a valuble and immediate service to our members, that's what gets us our members, thats what gets us our partners," she says. 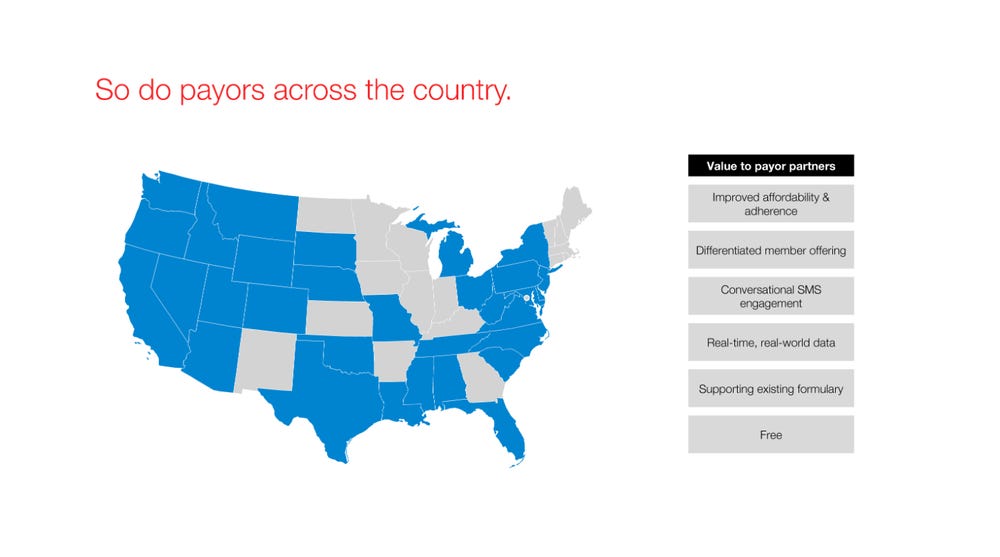 The pitch deck also emphasizes the value of Sempre for payers, or health insurers. Those factors include patients taking their drugs on schedule and that the service works with health insurers' lists of drugs that they cover. Oh, and the fact that it's free for their use doesn't hurt.

Much of the pitch deck is focused on proving that the startup, which was founded in 2015, has gained traction among users, health insurers and pharma companies. 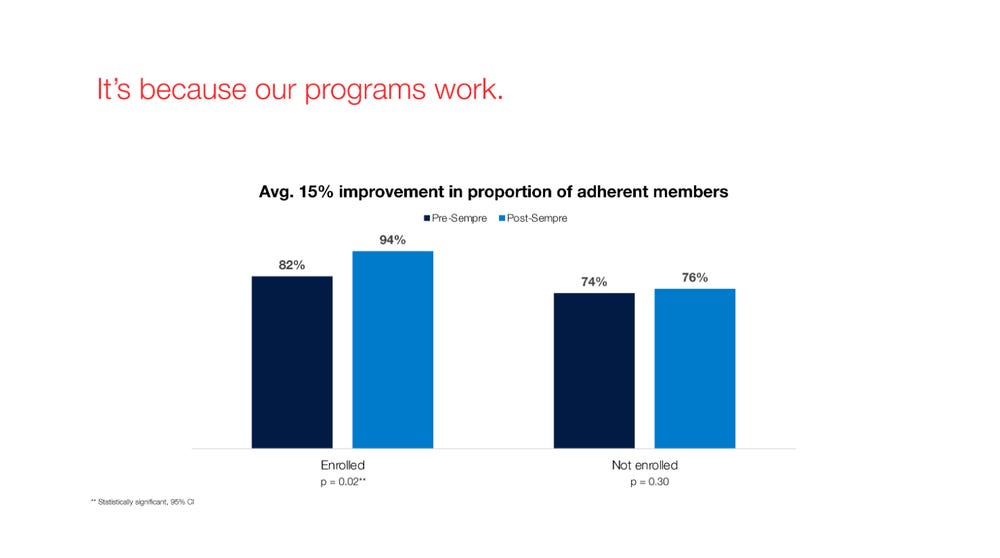 Sempre says that patients who use its platform are more adherent, or take their medications as prescribed by their doctors. 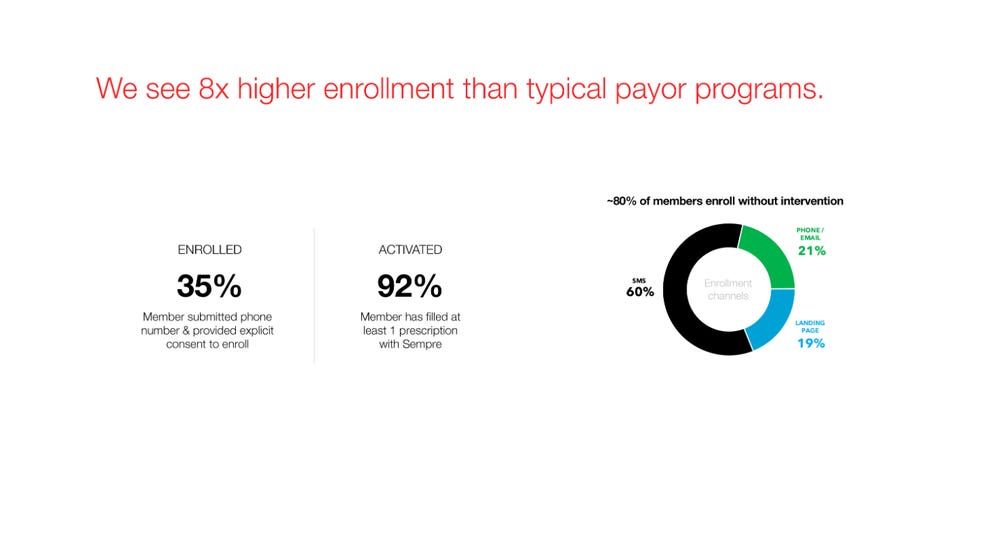 Digital health platforms have notoriously low levels of patient participation. Sempre says it's been able to buck the trend, with 35% of those eligible enrolling and 92% of those using the program to fill at least one prescription. 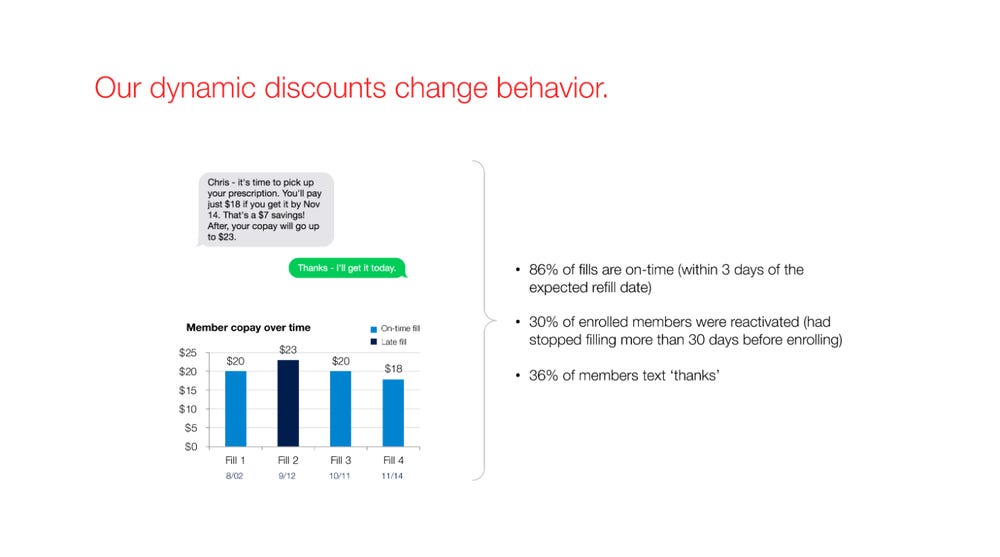 This slide illustrates how Sempre communicates with patients about the discounts available. The incentive structure is shown in the bottom graph, with patients who fill their prescriptions on time getting bigger discounts on their co-pay. 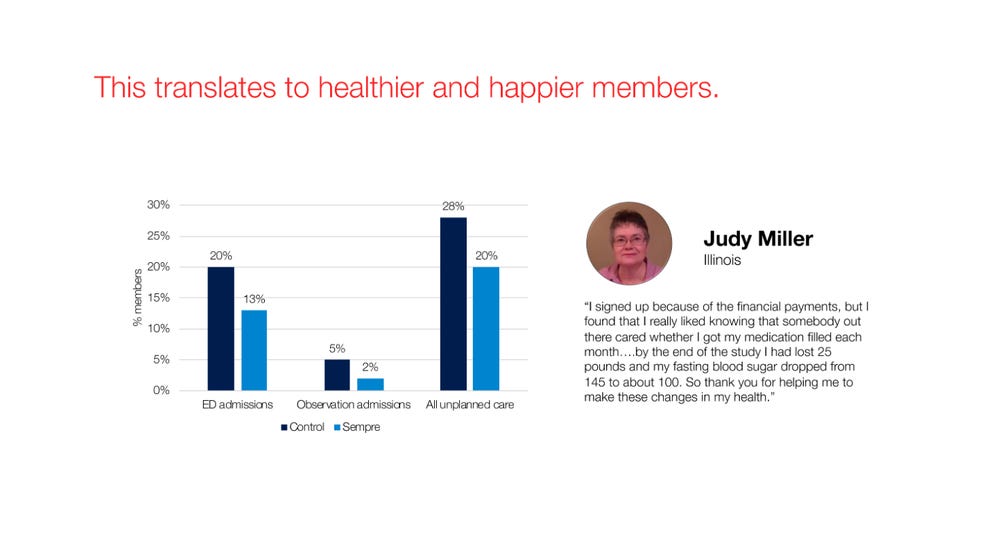 Sempre says that the discounts also help keep patients healthier, and out of the emergency department. 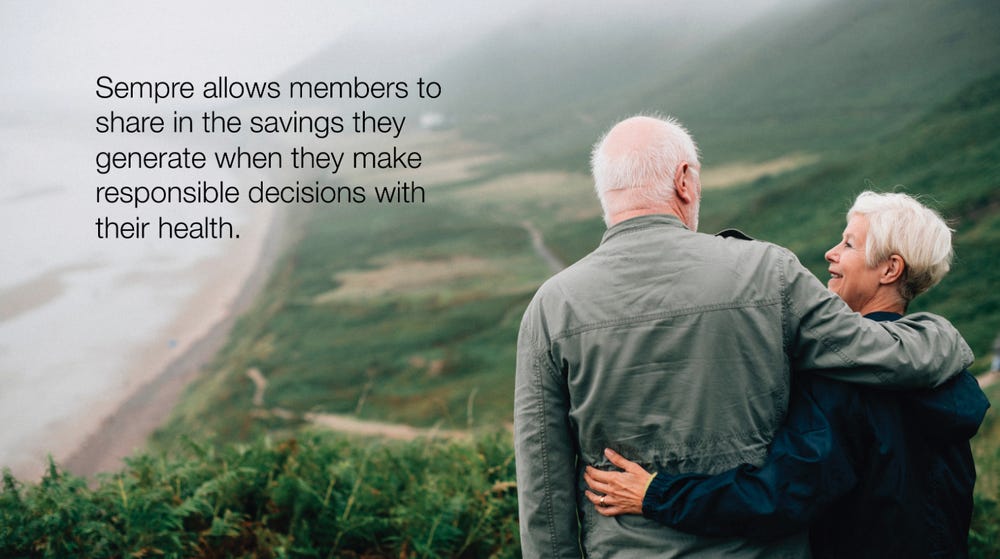 CEO Mathur describes the discounts as a "carrot" to drive better health decisions. "Never a stick, just a carrot," she says. "And assuming you continue to fill on time, you can drive down your co-pay substantially." 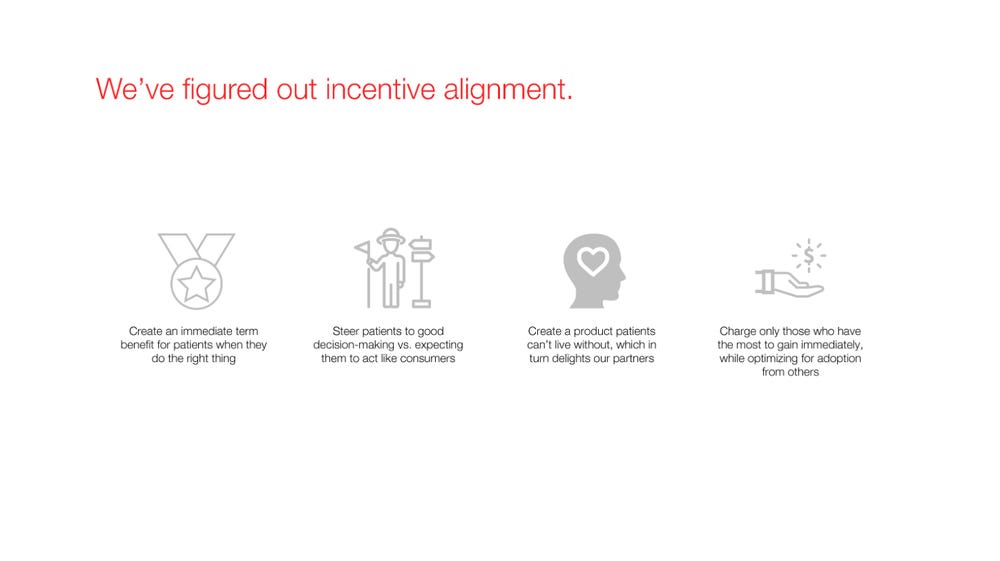 Sempre works with different players across the health system. This slide positions that model as aligning everyone's different incentives towards a common goal: getting patients to take their medications and stay healthy.

That model is underwritten largely by pharma companies, which pay — as the deck explains — because they "have the most to gain immediately." Pharma companies can't make revenue if patients can't afford their prescriptions. The way that Sempre works across different healthcare players makes it an attractive investment, says Ray Ko, a partner at Social Capital, which led Sempre's 2016 seed round and participated in its series A last summer, and Sempre board member. "We looked at a ton of drug delivery companies like the PillPacks of the world. And those are interesting, but didn't really align all the folks that exist in this system" as Sempre does, Ko told Business Insider. This also makes it easier for Sempre to add new partners, whether they are health insurers or pharma companies, Ko says. He uses the metaphor of a mall, where having many different stores will attract a mix of different types of customers. "Every new drug they add to the system will attract the next payer," and vice versa, he said. Facebook and Slack are very different products but something they share with Sempre is that "every participant that gets added to the system incentivizes other participants to join and participate." 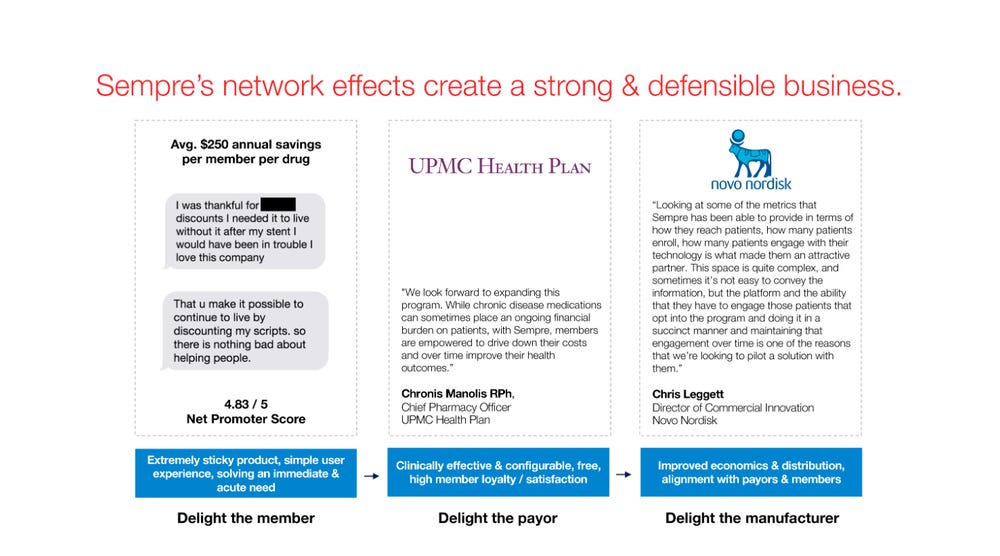 This slide sums up Sempre's business model for investors, explaining the way it works across patients, health insurers and drug companies, and why each of those want to participate. 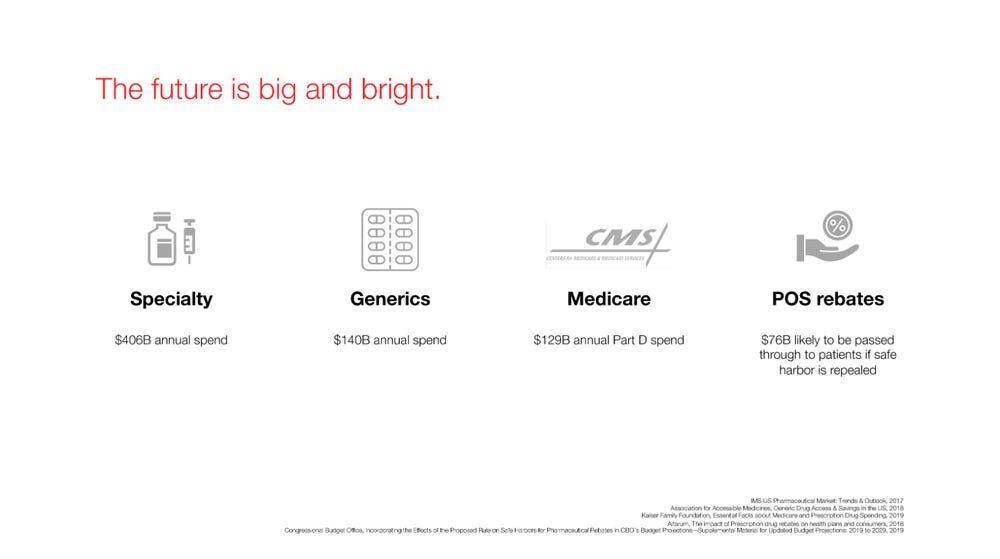 This slide, the second to last of the pitch deck, pivots to focus on the startup's future opportunities in different pharmaceutical markets. 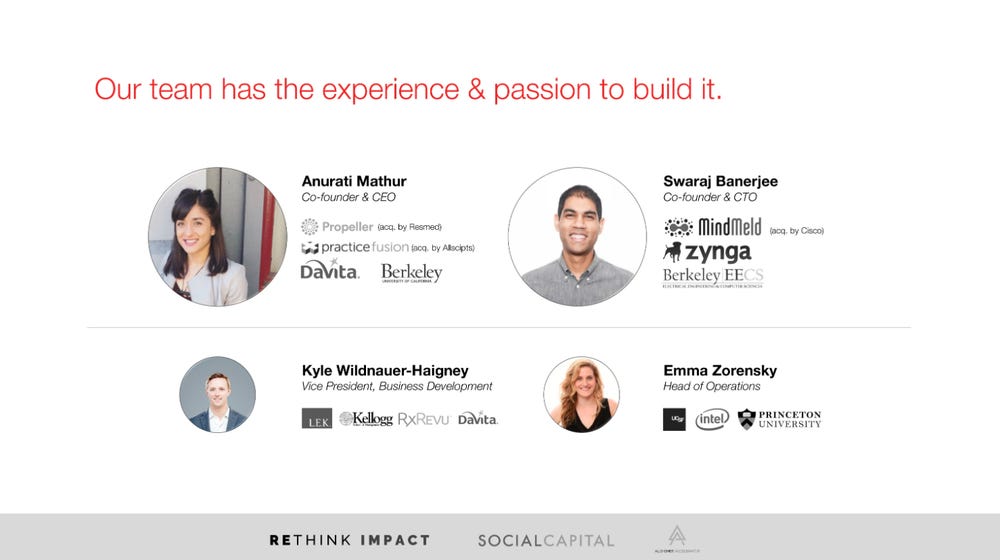 "The message really is: Here's what we've done so far, and here's really the next step of the full potential of Sempre," Mathur says.

This story was first published in May. It has been updated.