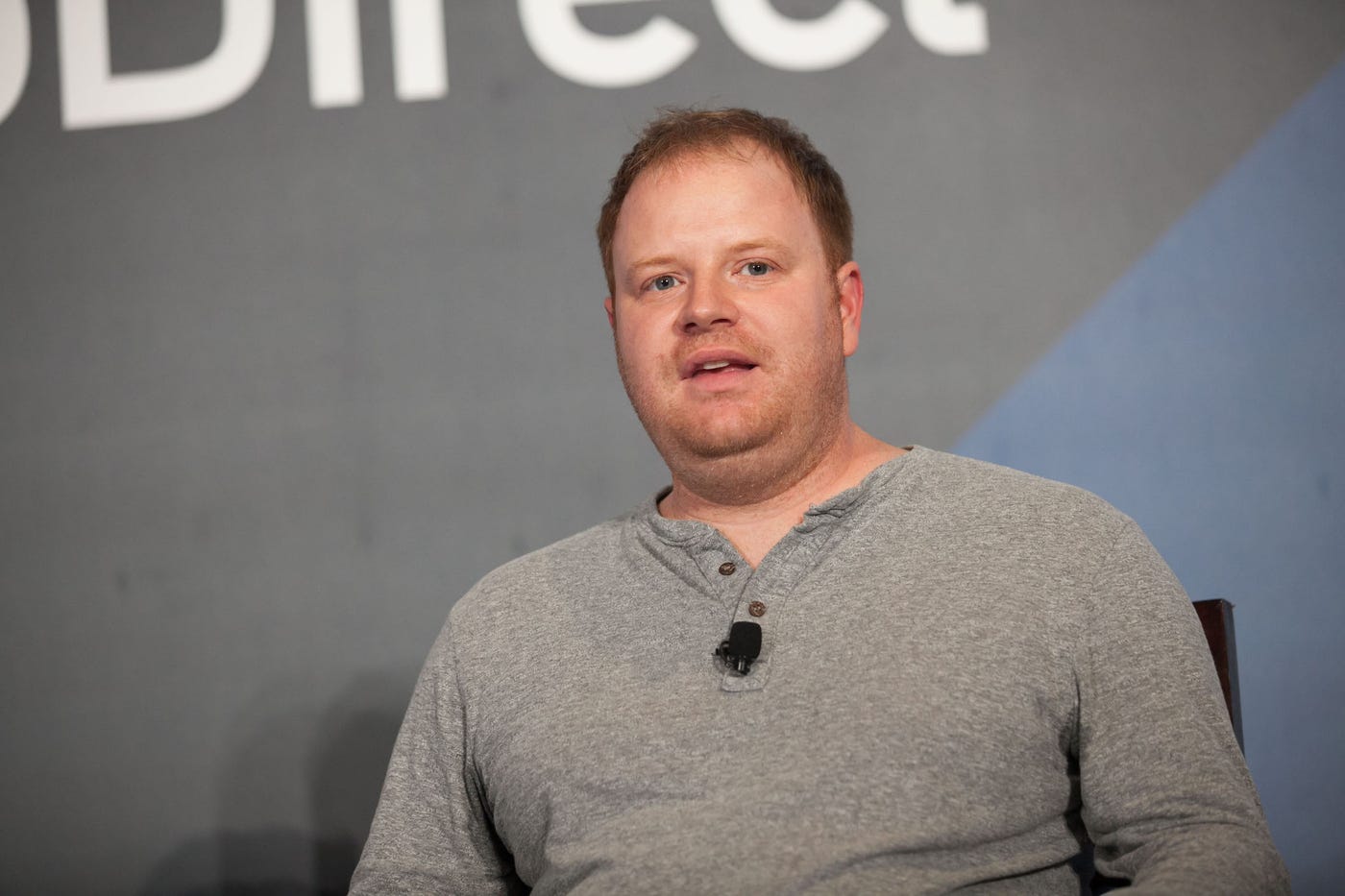 To Parker Conrad, when it comes time to raise money from venture capitalists, a memo is loads better than a deck.

Conrad should know. He’s founded three venture backed startups — SigFig, Zenefits, and, most recently, Rippling. Last week, his latest firm, which offers a service that helps corporate human resource and information technology departments manage their companies’ workforces, announced that it raised $45 million in a Series A round led by Kleiner Perkins. Conrad and his team secured the new funds without a traditional pitch deck presentation; they used what he calls a pitch memo instead.

“I actually feel very strongly that this is the way people should raise money,” Conrad told Business Insider in an interview last week.

Read this: Parker Conrad thinks he can beat Zenefits, the company he founded, and he just got $45 million in funding to prove it

Conrad’s experience in tech has come with a good deal of controversy. In 2016, he was forced out at Zenefits, which was later accused of selling insurance without a license by state and federal regulators. In a $500,000 settlement with the SEC, Conrad did not admit or deny violating federal securities laws. With Rippling, Conrad is trying to bounce back, offering what he says is a the next step in the evolution of workforce software that began with Zenefits.

Rippling’s pitch memo is organized much like a traditional deck. The memo offers an overview of the company, discusses its strategy, talks about its product, and explains how it makes money. And the document offers a few charts and diagrams to give investors a sense of the how its business is doing.

But the memo is written out and meant to be read, rather than viewed as a slideshow. As such, it offers much more detail than the typical pitch deck. That’s intentional, said Conrad, who explained his thinking in a blog post he published Wednesday.

One of the biggest problems with pitch decks is their lack of detail, he said. They’re generally not self-explanatory. Someone from the startup usually has to walk potential investors through the deck step-by-step.

“Decks very rarely stand on their own,” he said.

That shortcoming can affect founders’ ability to raise funds, Conrad said. Having to walk potential investors through a deck takes a lot of time. Because of that constraint — and everything else founders have to worry about — when they’re out fundraising, they often only have the time to talk with a handful of venture firms, he said. The founders behind the hottest startups may only meet with five or six, he said.

“As an entrepreneur you’d love to be able to cast a wider net,” he said. But, he continued, “the hours in the day limits how many of those interactions you can have.”

That’s where a pitch memo comes in. Unlike a deck, it is self-explanatory. The memo allows a startup to make its pitch to many more potential investors, simply because its founders don’t have to explain it every time, he said.

And a pitch memo has another advantage over a traditional presentation, Conrad said. The process of raising funds from a venture firm often involves a step that’s not widely known, he said. After a startup makes a pitch to a venture partner, the partner has to convince his or her other partners to sign off on an investment.

Typically, before the partners meet to discuss the investment, the one sponsoring the deal types up a memo to circulate to his or her fellow partners describing the company and the investment opportunity, he said. It’s not unusual that the night before the general partners meet to discuss an investment, the one sponsoring the deal is up late frantically trying to put together his or her memo, he said. A pitch memo written by the startup’s founders can provide a template for that partner-written memo instead of forcing the partner to try to put it together from memory, Conrad said.

“The likelihood … that they really get it right and that they incorporate the way you understand the business into their description of the business for their partnership is just much, much higher than if they’re sitting there trying to do this off a PowerPoint deck,” he said.

To be sure, Rippling didn’t go entirely presentation-free in making its pitch. In fact, Conrad and his team actually did put together a 46-slide deck. But instead of using the presentation as the main vehicle to tell Rippling’s story, Conrad used it to highlight the company’s key data points via charts. Even here, he veered from tradition, including in the presentation footnotes and a detailed appendix to offer more information and explain how Rippling calculated its data.

Conrad said he got the idea for and first tried to use a pitch memo while at Zenefits. But he really pushed it at Rippling.

“I’m convinced that this is the way everyone should do this,” he said. “I kind of hope maybe a couple years from now every entrepreneur will be writing a pitch memo instead of a pitch deck.”

Here’s the pitch memo Rippling used to raise its $45 million round: 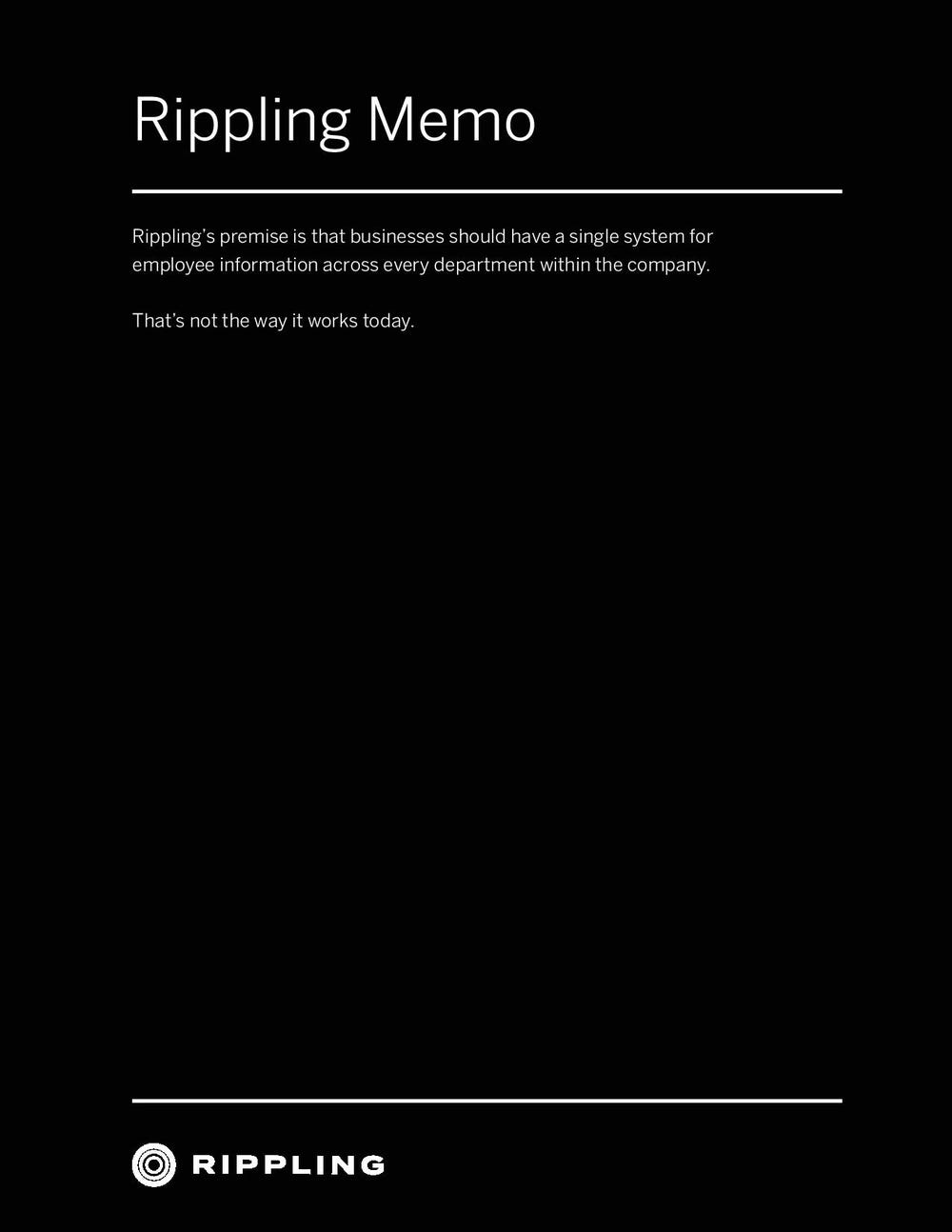 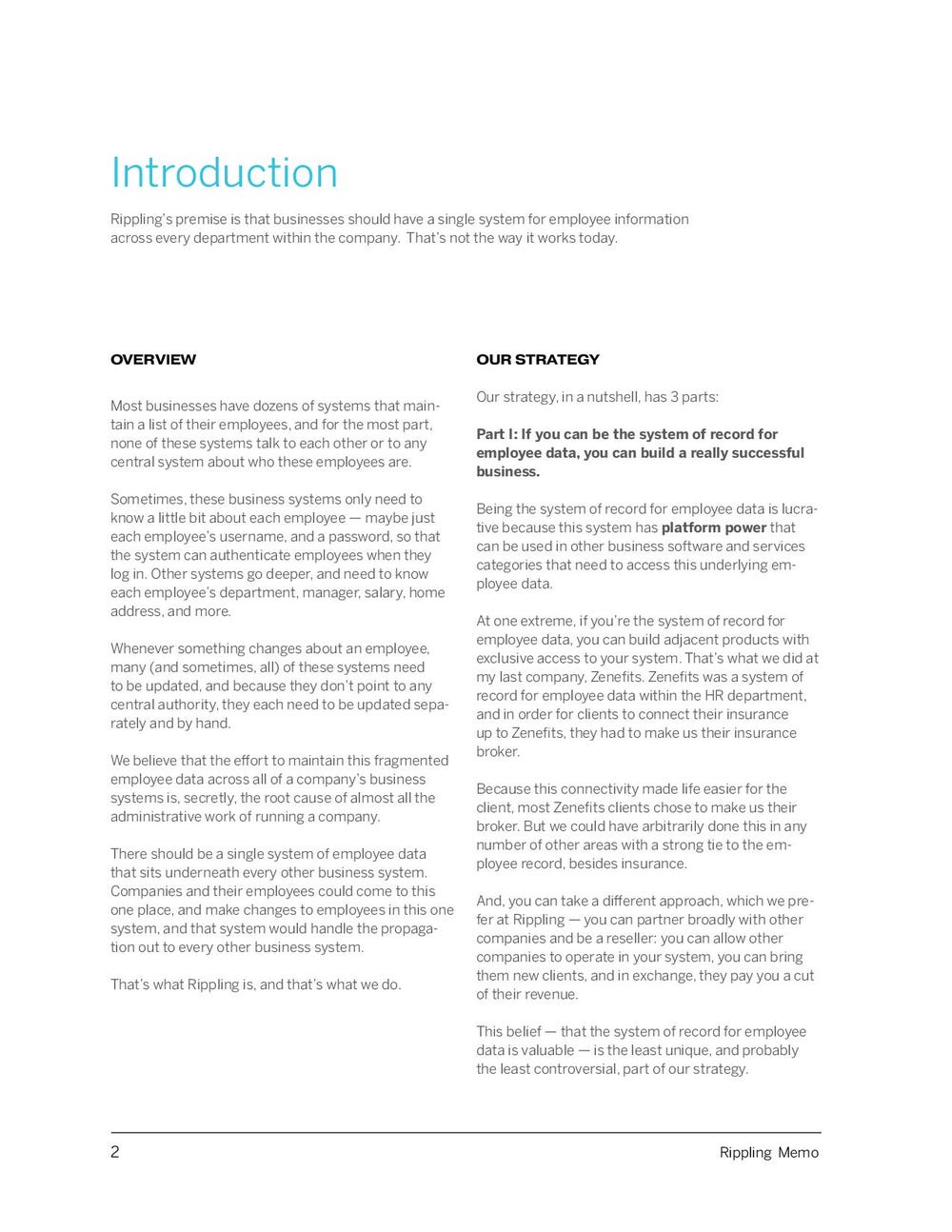 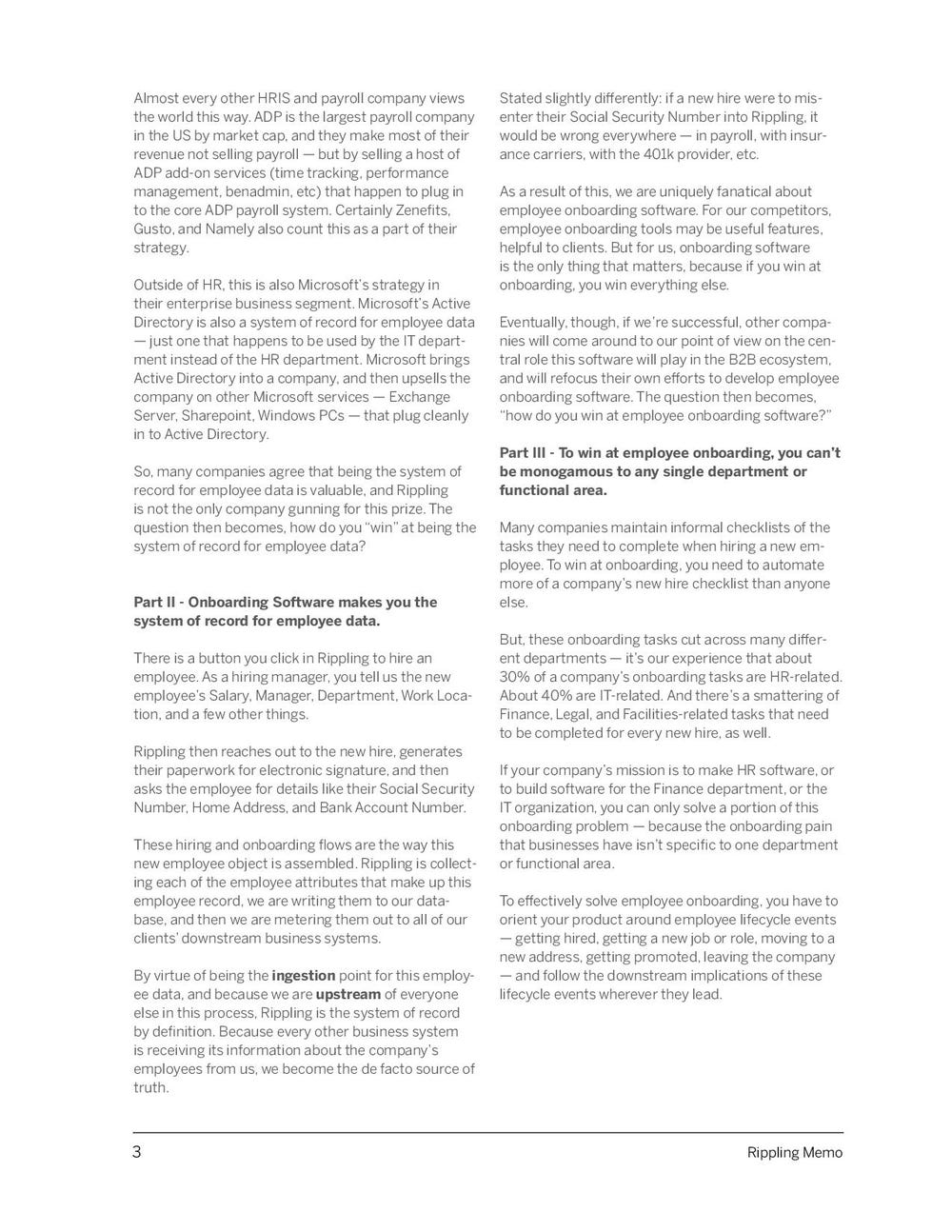 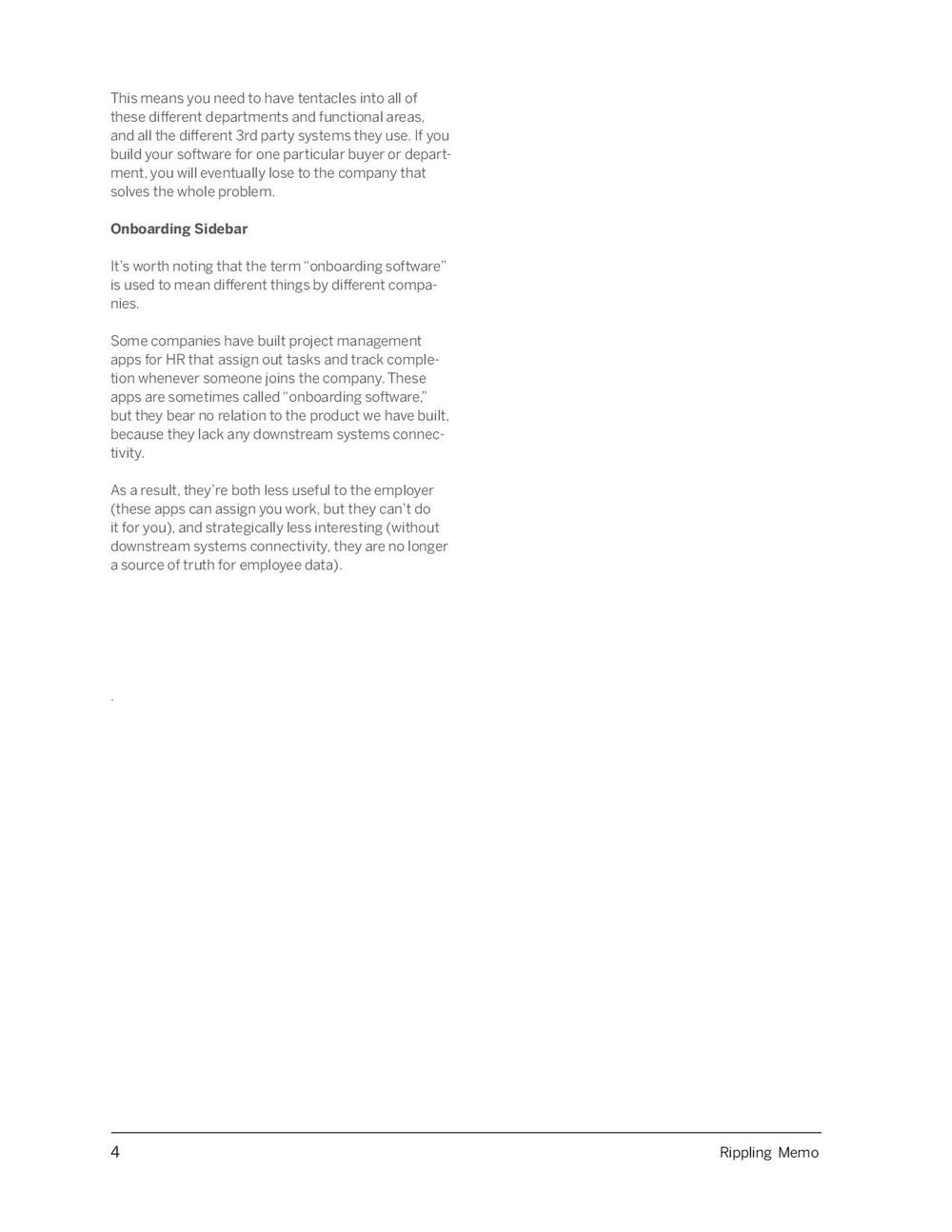 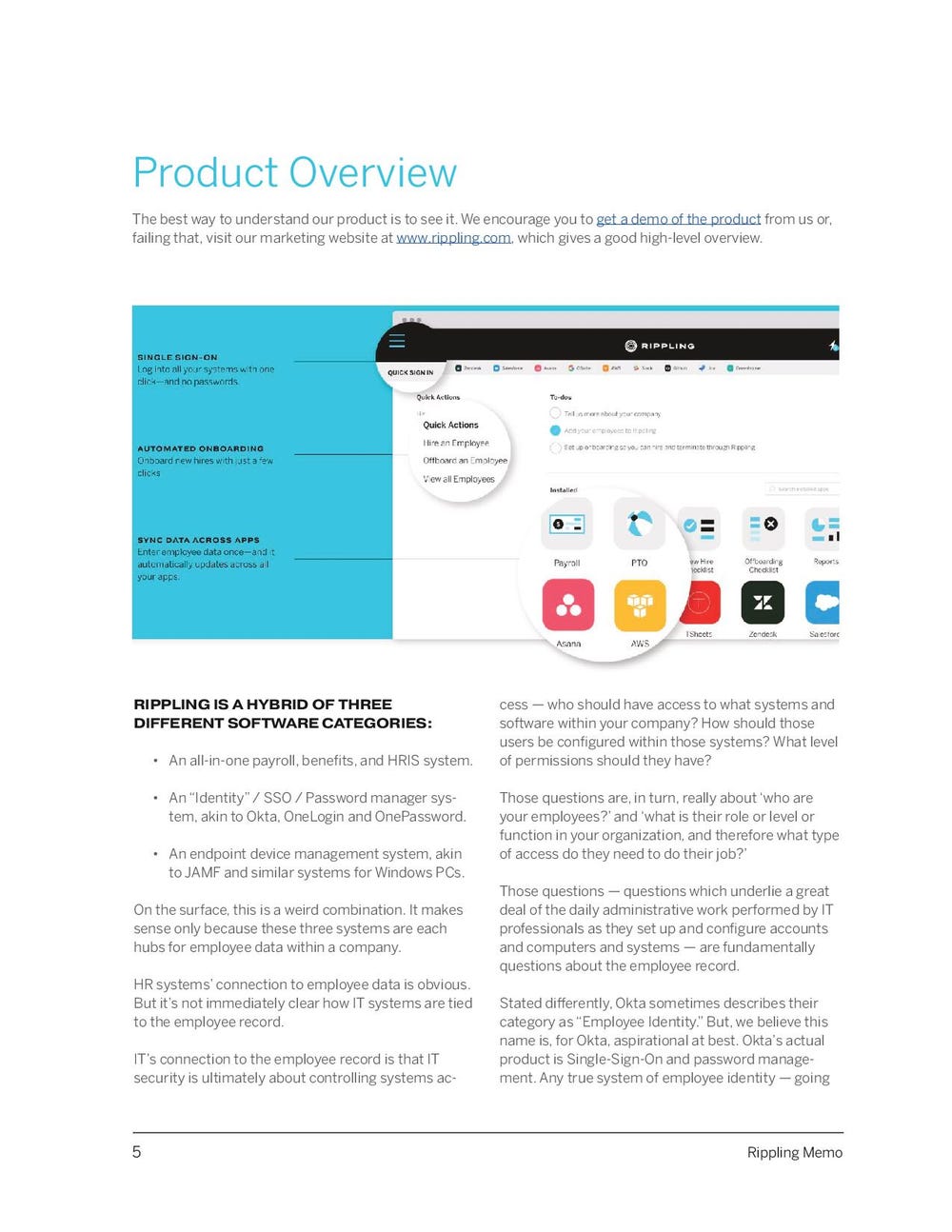 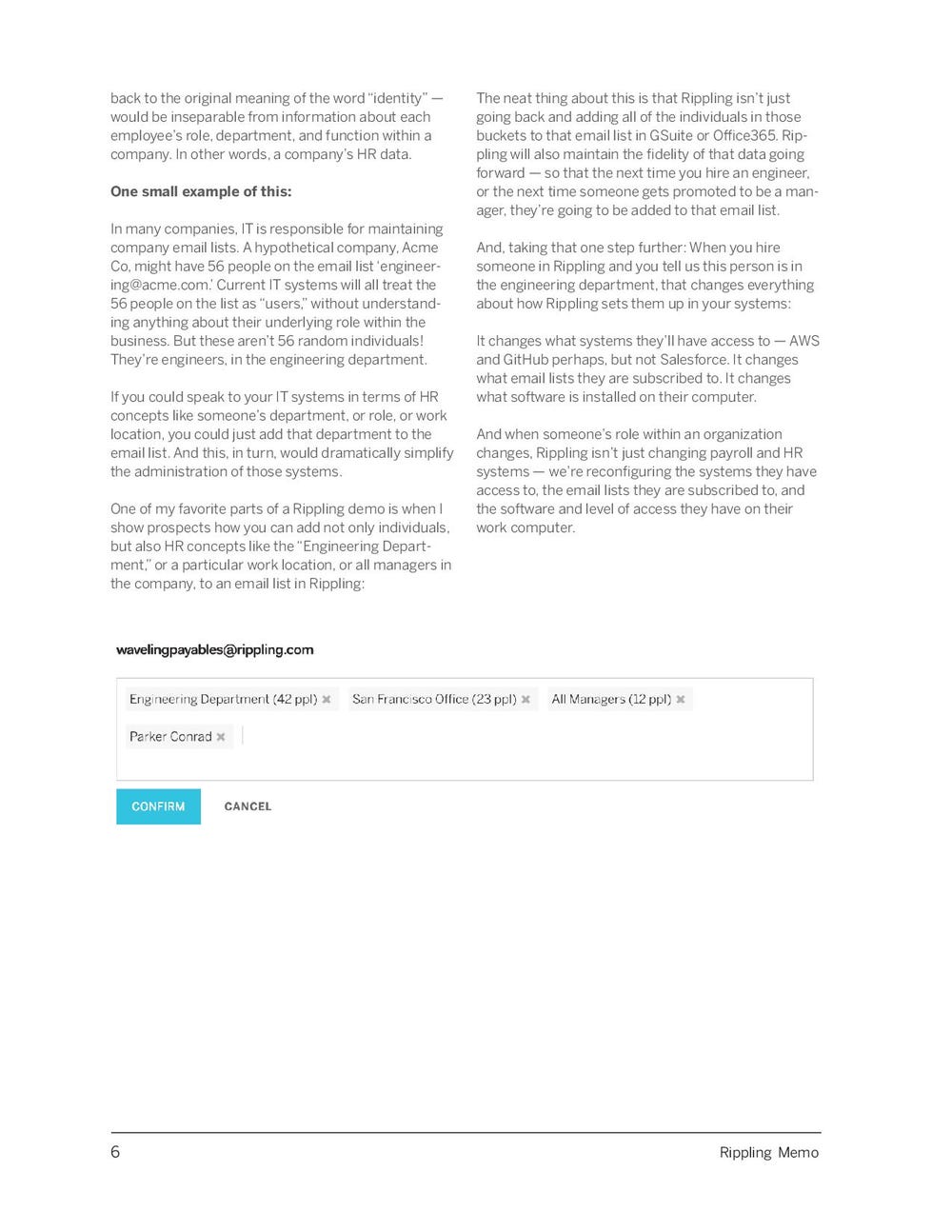 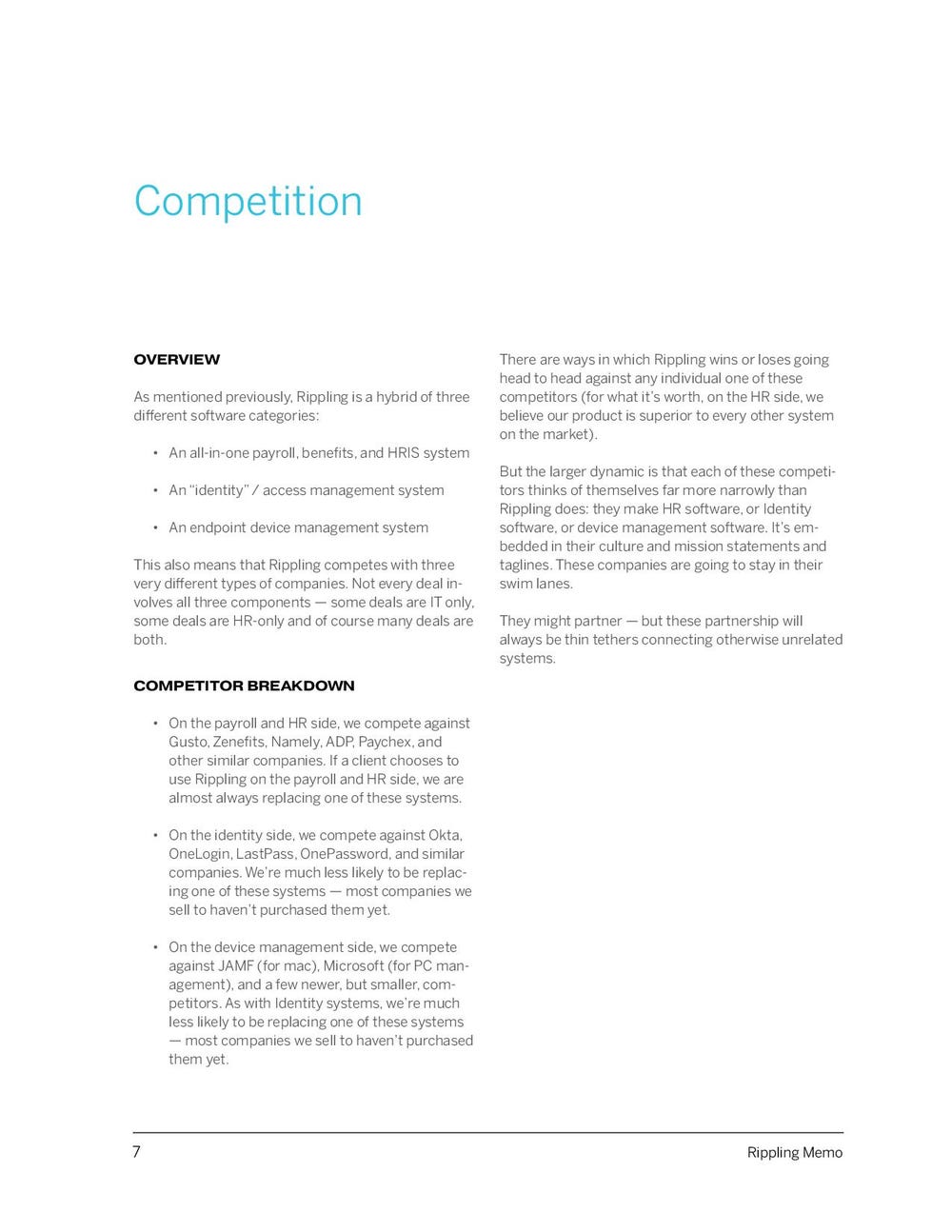 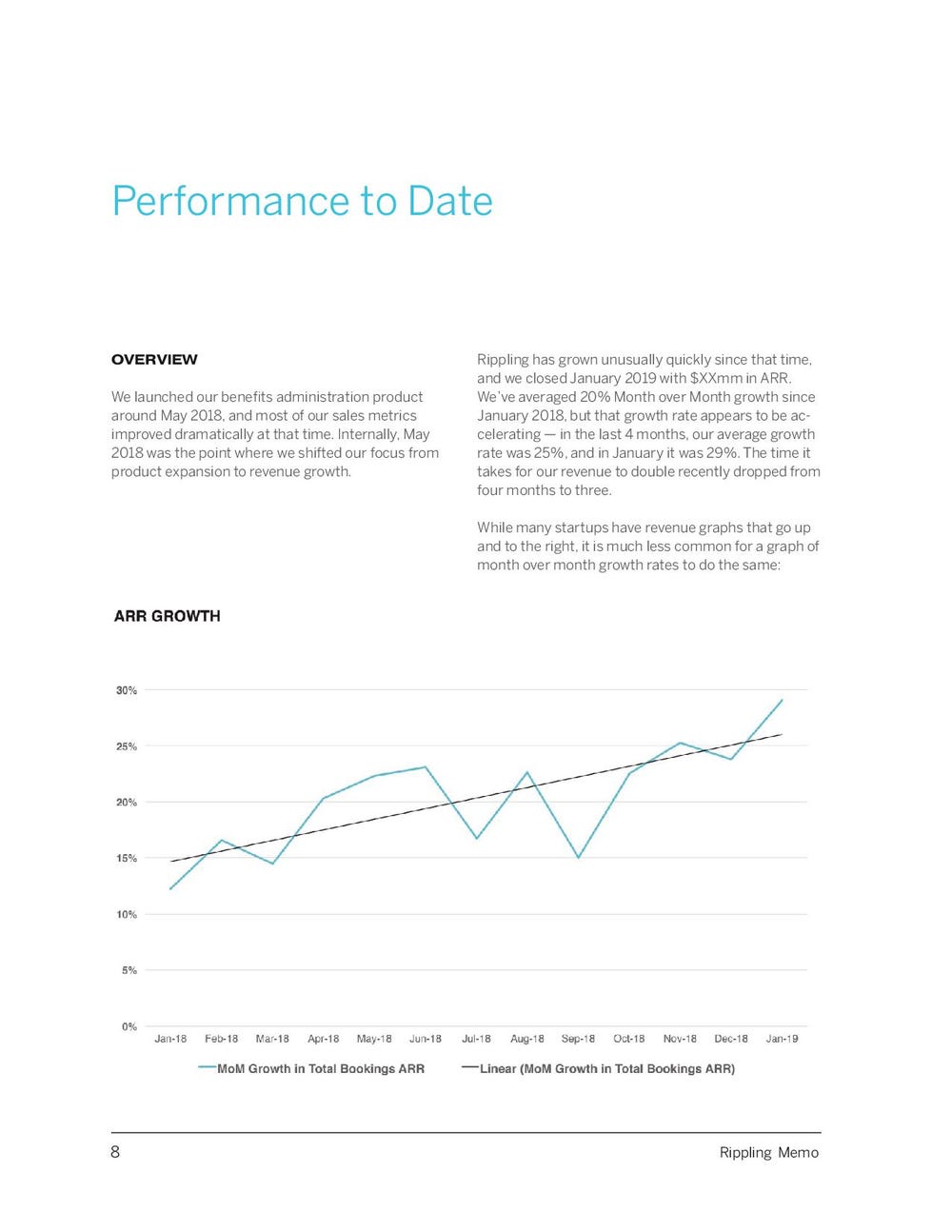 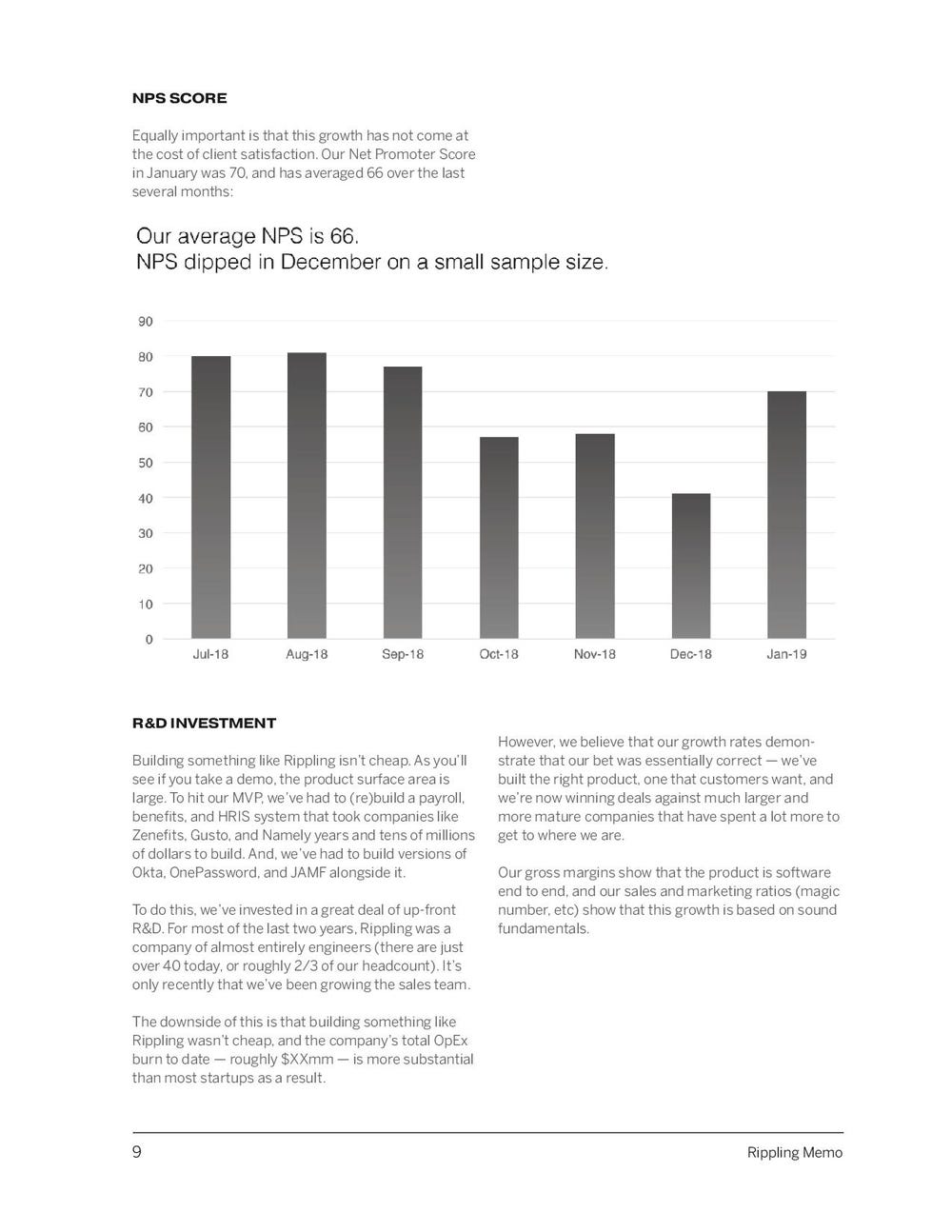 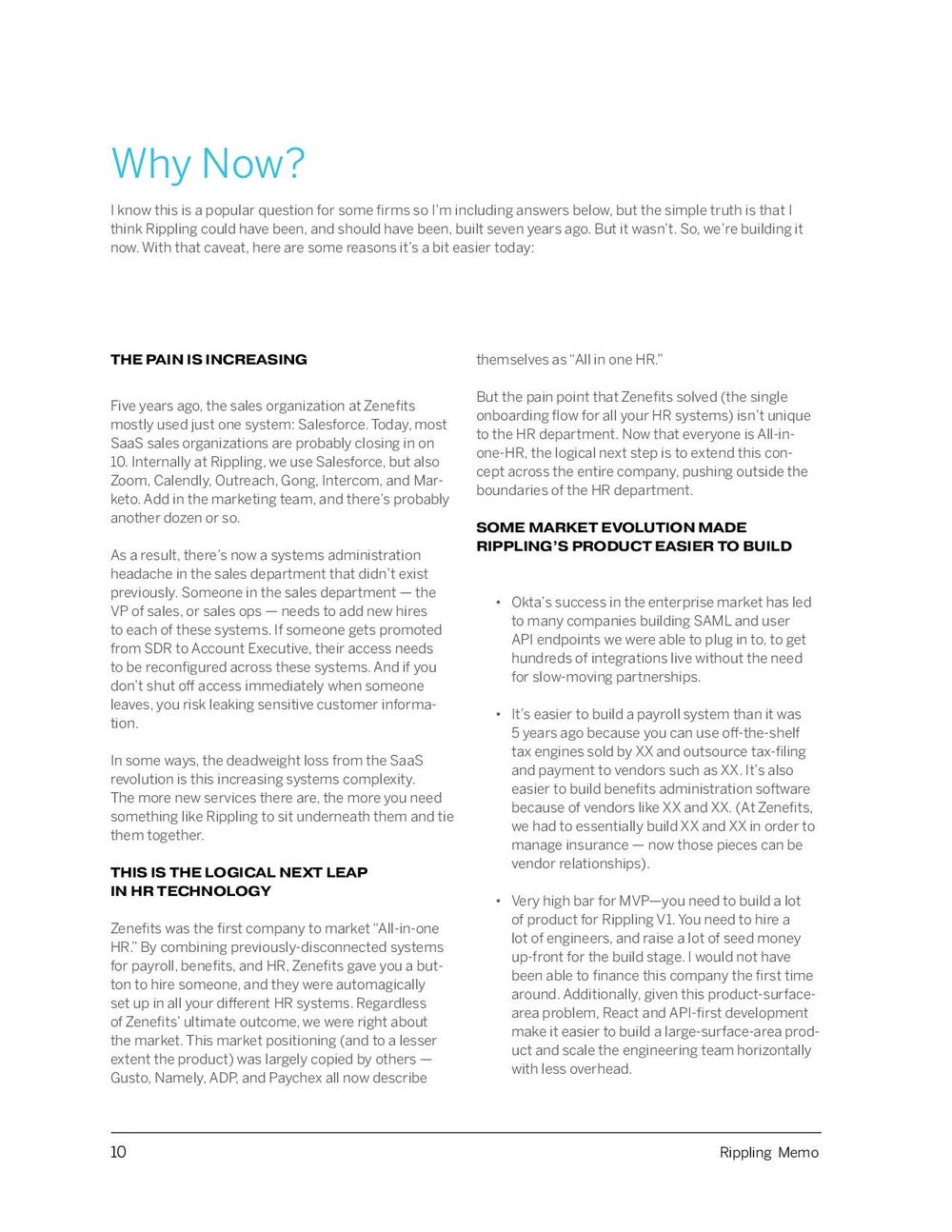 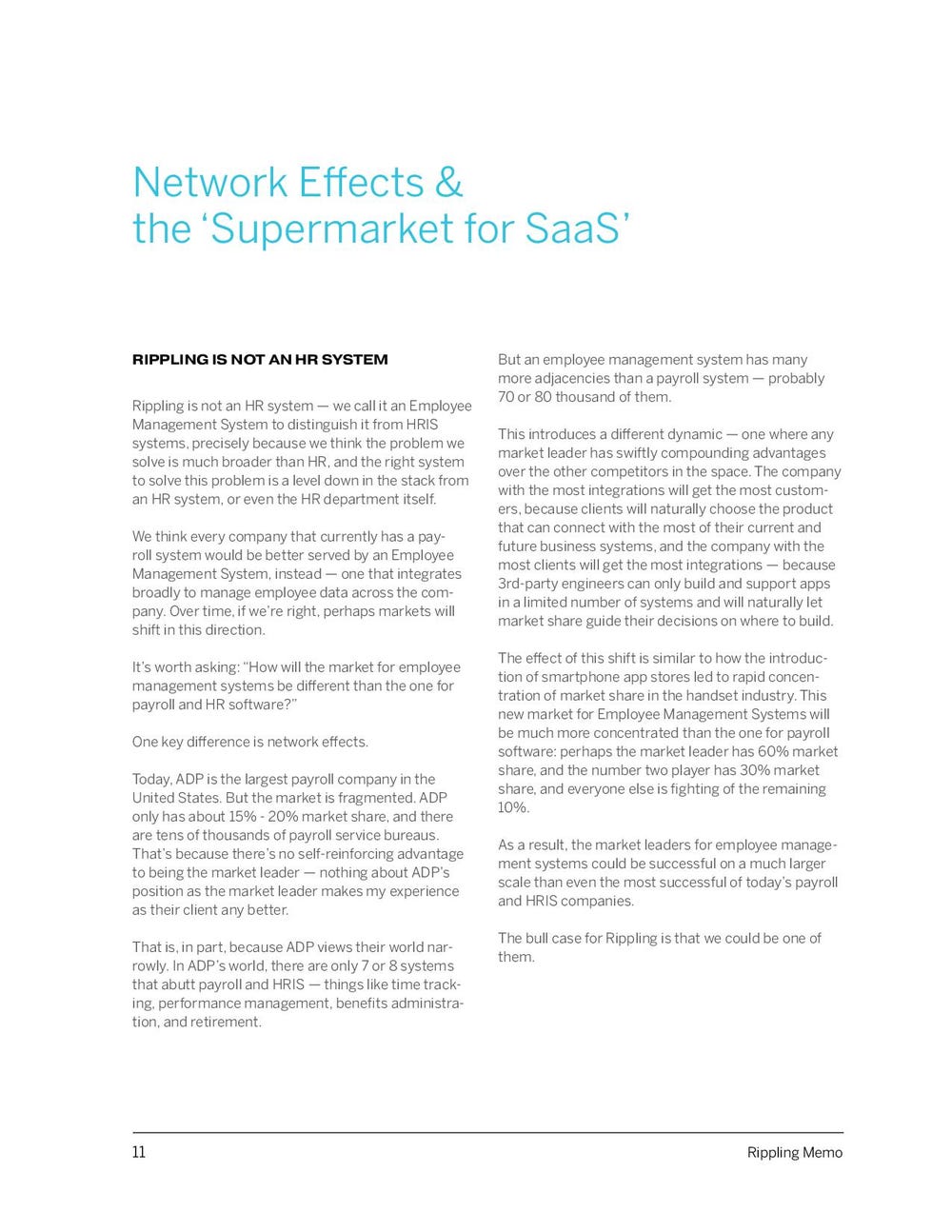