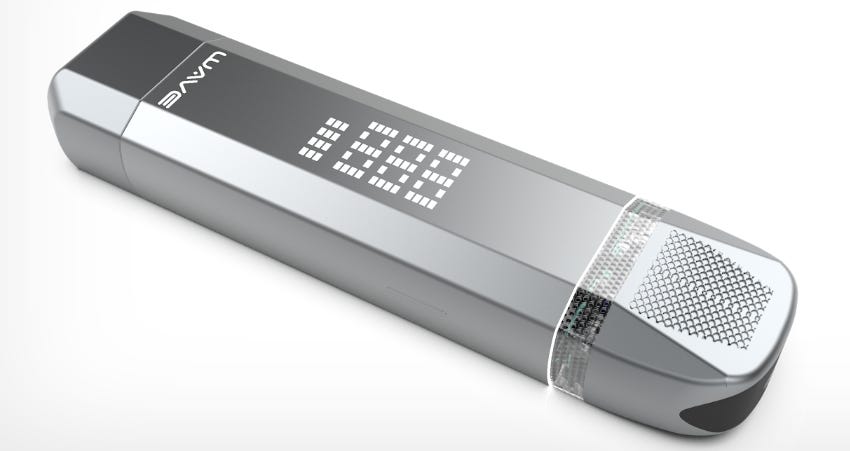 Once seen as a healthier alternative to smoking, the consequences of vaping were thrust into the spotlight this fall as thousands of people across the US were sickened after vaping cannabis and nicotine products.

While the Centers for Disease Control and Prevention identified vitamin E acetate, a thickening agent that’s mostly found in illicit vapes, as the culprit for most of these illnesses, the issue put a cloud over the vape industry.

Then, President Donald Trump issued a crackdown on some flavored vapes, which the federal government said are marketed towards underage users. Some vape companies have since seen their sales slump, and have struggled to raise money. Some were forced to slash employees and shelve growth plans.

Disrupting the vape industry, without heat

Against this backdrop, a startup called Respira is working to offer a “heat-free” vaporizer which releases the desired compound — be it THC or nicotine — without the toxic elements. Respira’s vaporizers aren’t yet on the market, and the company says they should be available later this year.

“There’s this prevailing myth that only combustion or actual burning creates harmful byproducts, and that’s just unequivocally not true,” Mario Danek, Respira’s CEO, told Business Insider in an interview. “The heat in and of itself creates toxic byproduct formation in vapes. These are unintended, but harmful consequences.”

Vaping relies on heat to release the desired chemical compound, be it THC or nicotine, from a solution. That heat can also release harmful compounds, which vape users are unwittingly inhaling into their lungs.

The problem is especially acute in illicit THC vapes, which Business Insider previously reported were found to contain pesticides and heavy metals — some of which can break down into carcinogens and other poisonous gases when heated.

Respira has so far raised $2.1 million in convertible notes, a form of short-term debt that converts into an ownership stake over an agreed-upon timeframe.

The company is set to release its first product, called the Wave, in some markets later this year, Danek said.

Using the Wave is supposed to feel similar to using other e-cigarette or vape products, Danek said. The Wave’s size and shape is also similar to other vaping devices like the Juul.

Respira’s vape borrows from a medical technology called zero-heat nebulization. In simple terms, a user buys a cartridge containing a liquid — which Danek says will be produced by third parties and contain either nicotine, THC, CBD, or theoretically other compounds — and inserts it into the Wave’s battery pack, similar to a Pax or a Juul pod.

Using a proprietary system, the Wave “aerosolizes” the compound, or turns it into a cloud of vapor, without adding any heat.

Read on for the pitch deck that Respira used to raise over $2 million to develop what it says is a safer vape: 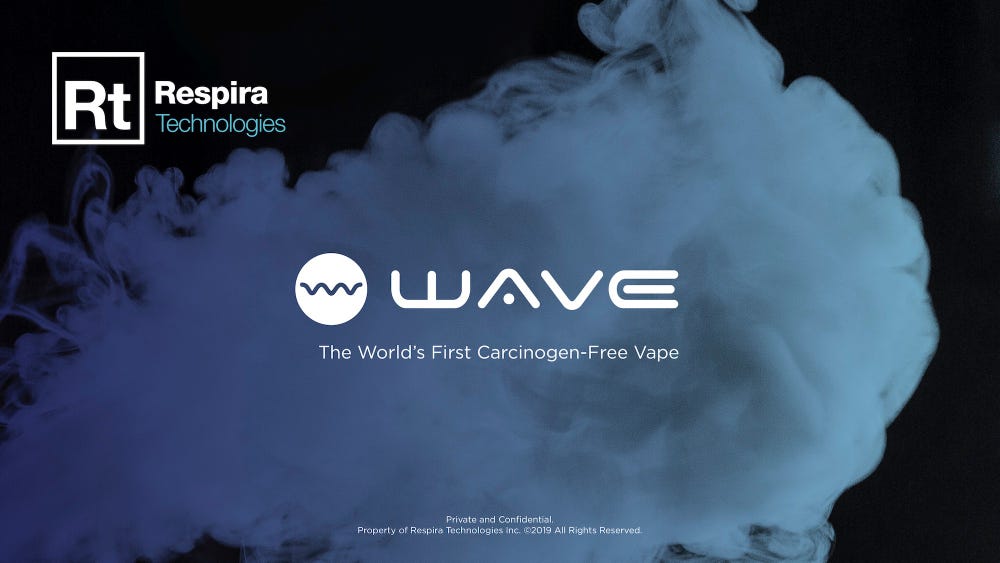 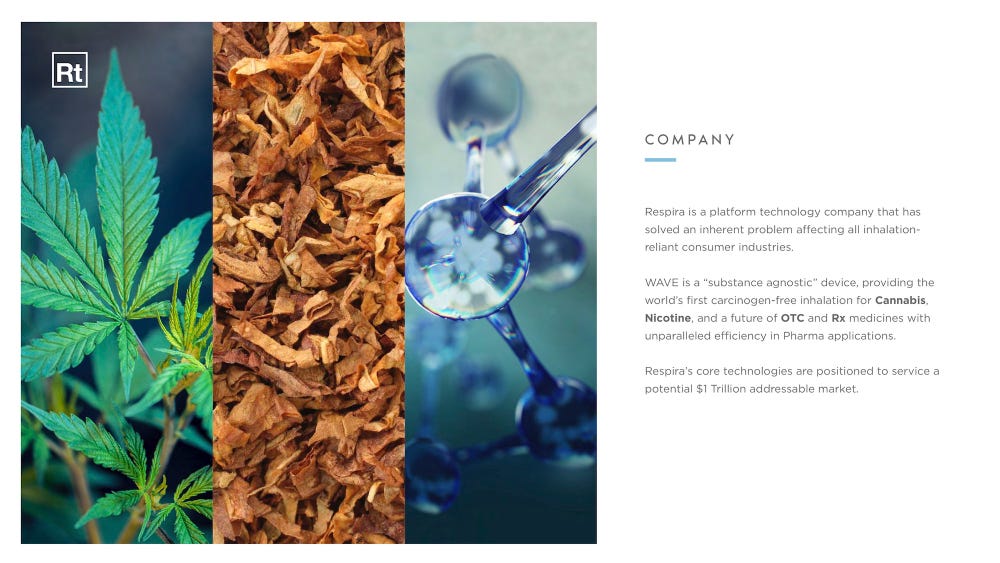 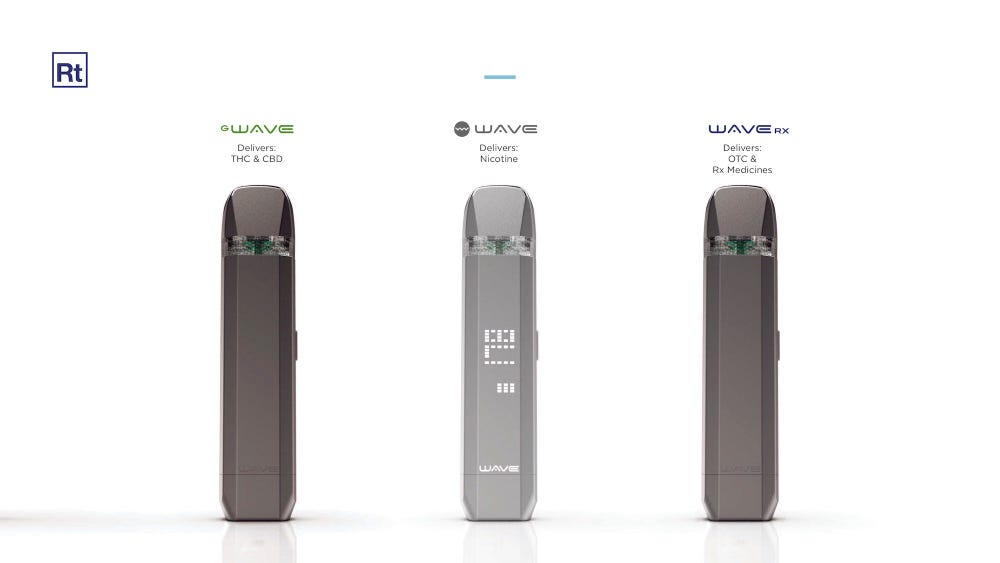 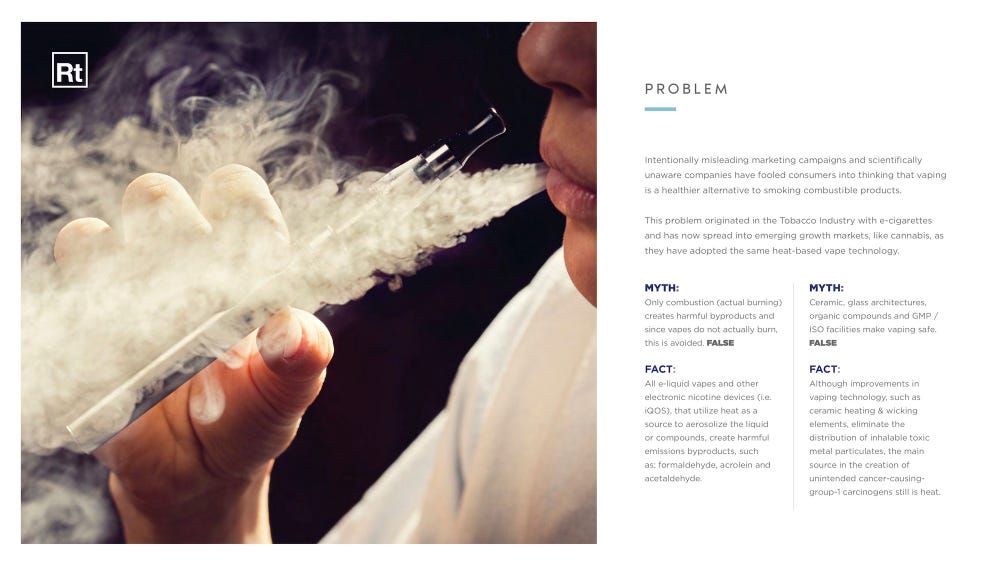 "There's been a lot of obfuscation in the space that's been led by the sort-of vape cowboys in the early days," Danek said. "In part, I guess that's perpetuated by big tobacco, as some of these companies either got swallowed up or co-invested into." 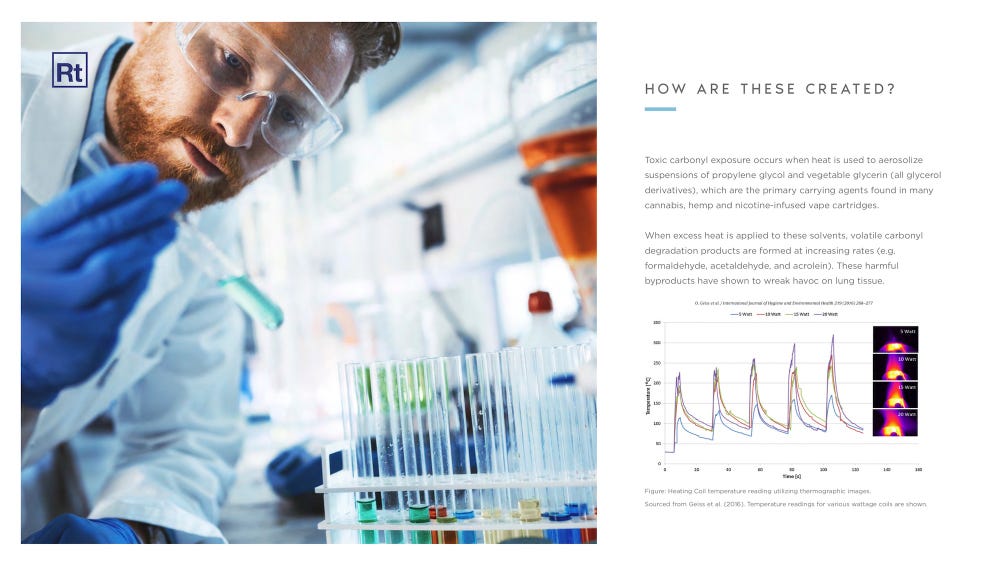 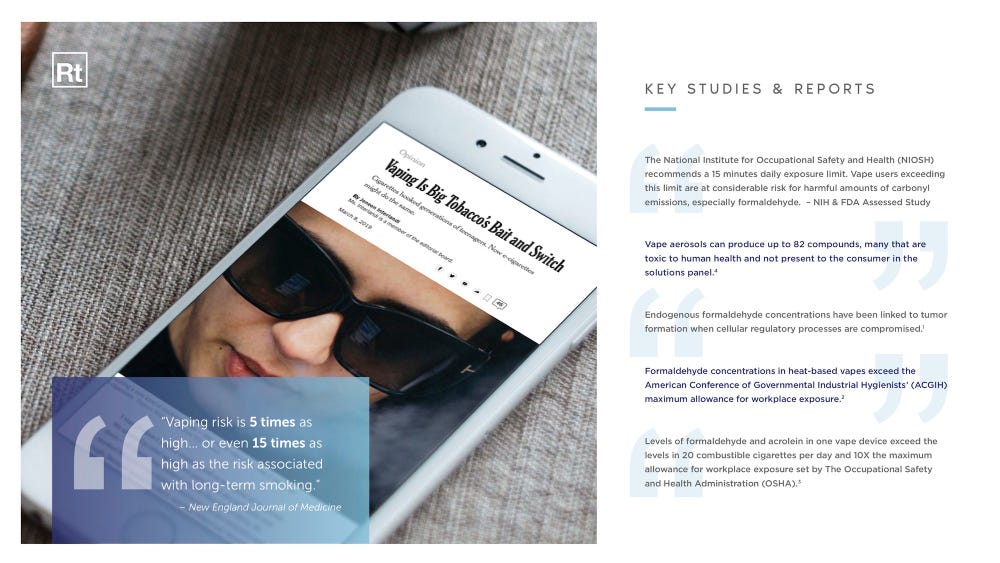 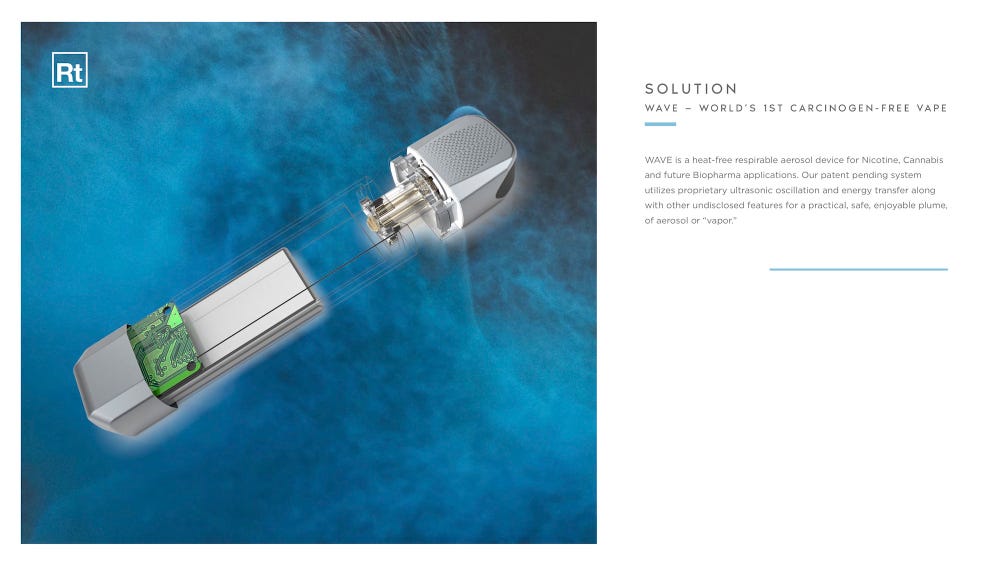 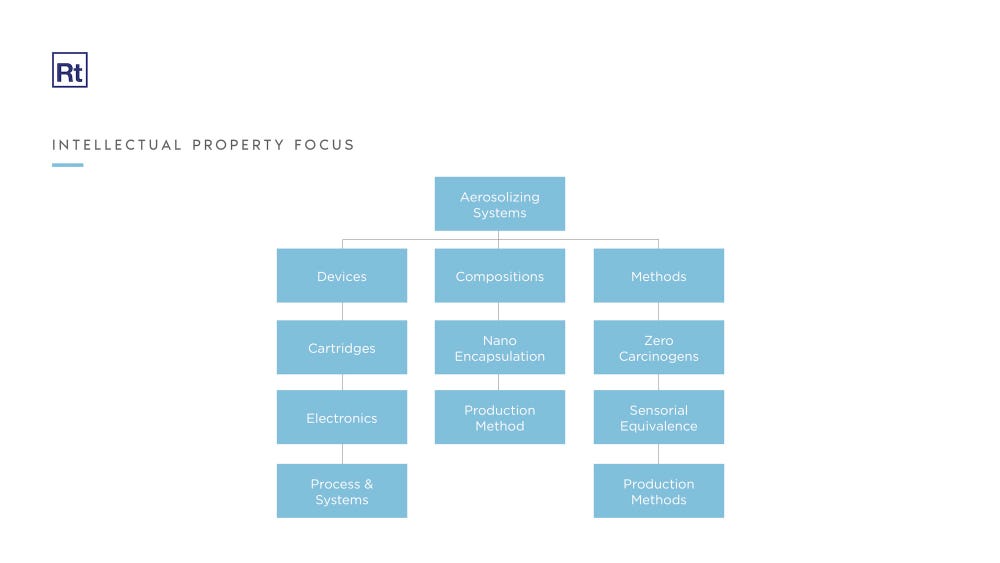 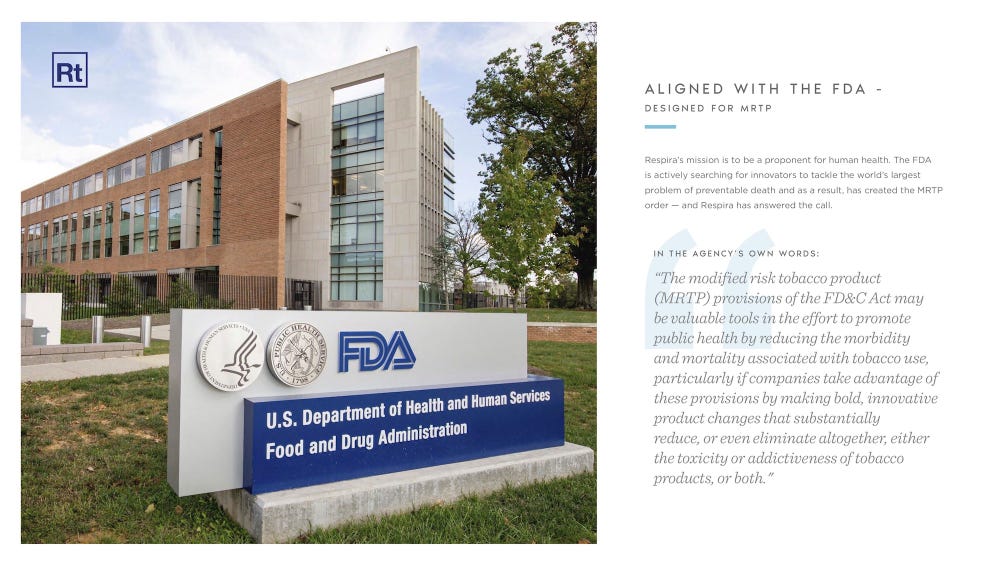 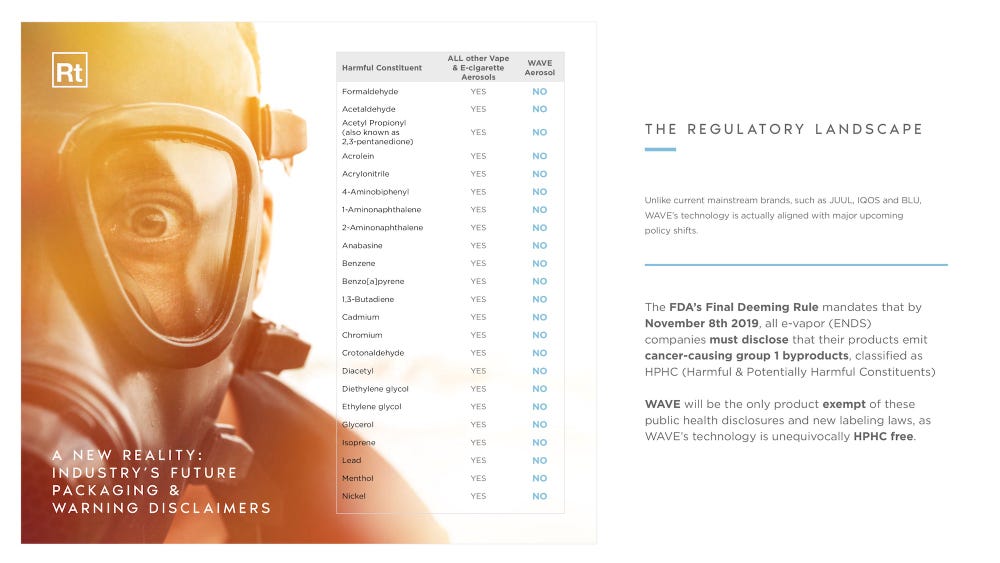 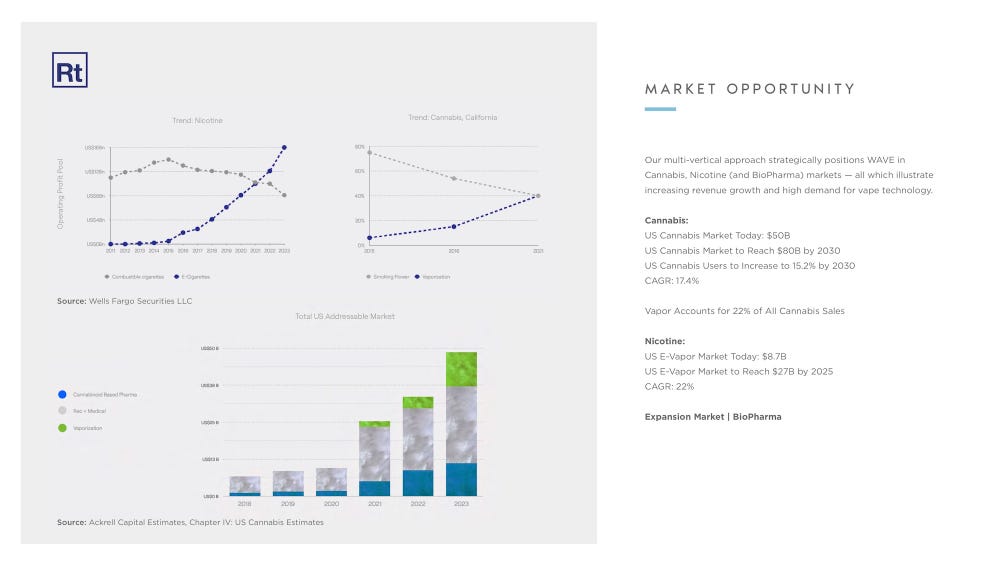 Danek says the Wave is "substance agnostic," meaning the vape can be used for nicotine, THC, CBD, and other drug delivery with easy modifications. 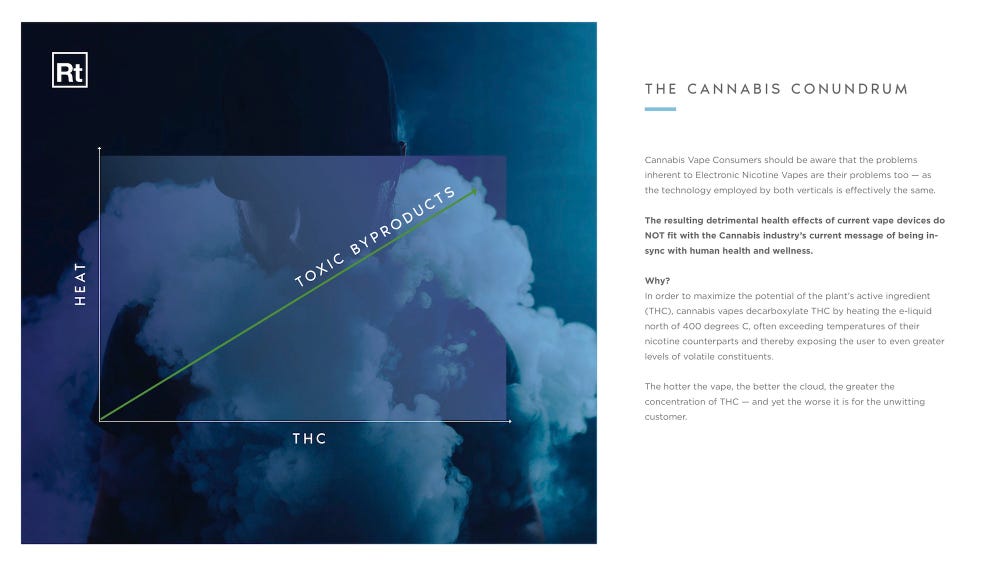 The higher you heat a vape, Danek says, the more THC is released and the stronger the effect. But more heat means more harmful byproducts. 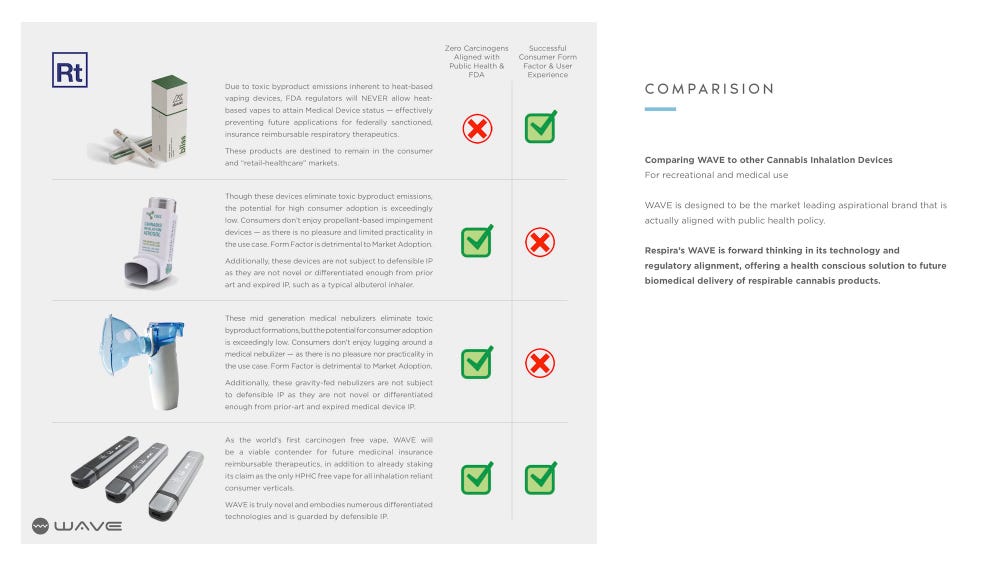 This slide shows Respira's aim to compete with recreational vapes, and eventually with medical devices too. 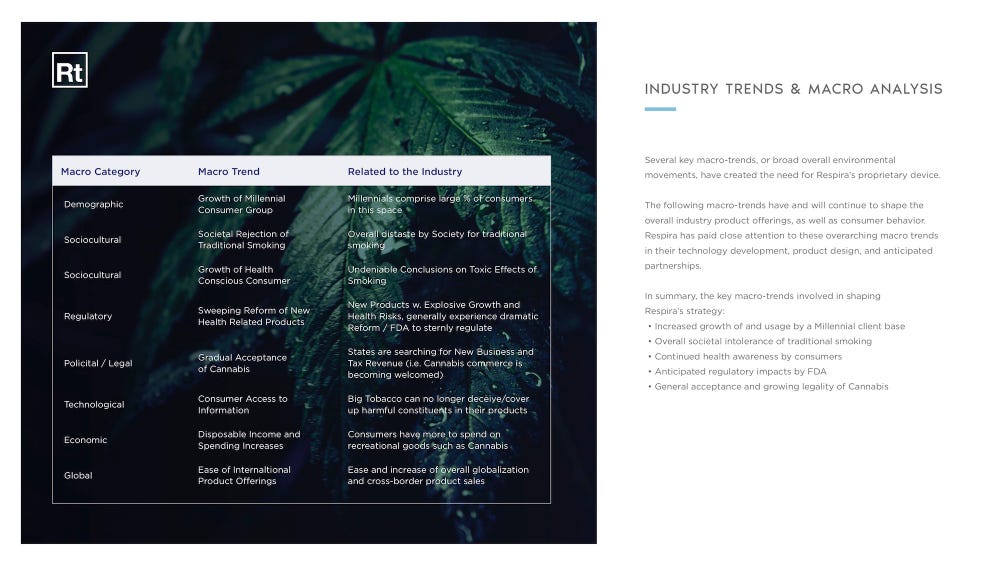 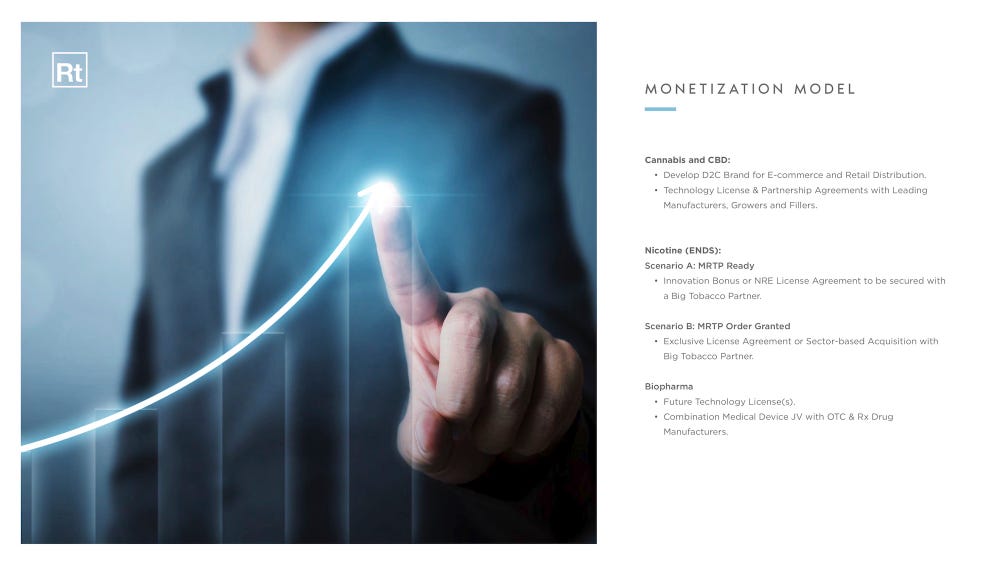 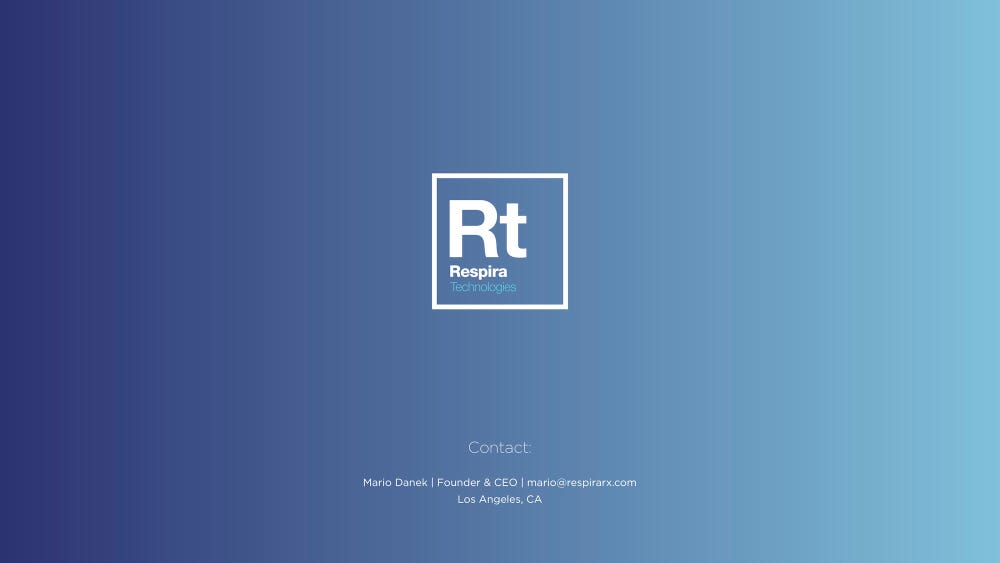