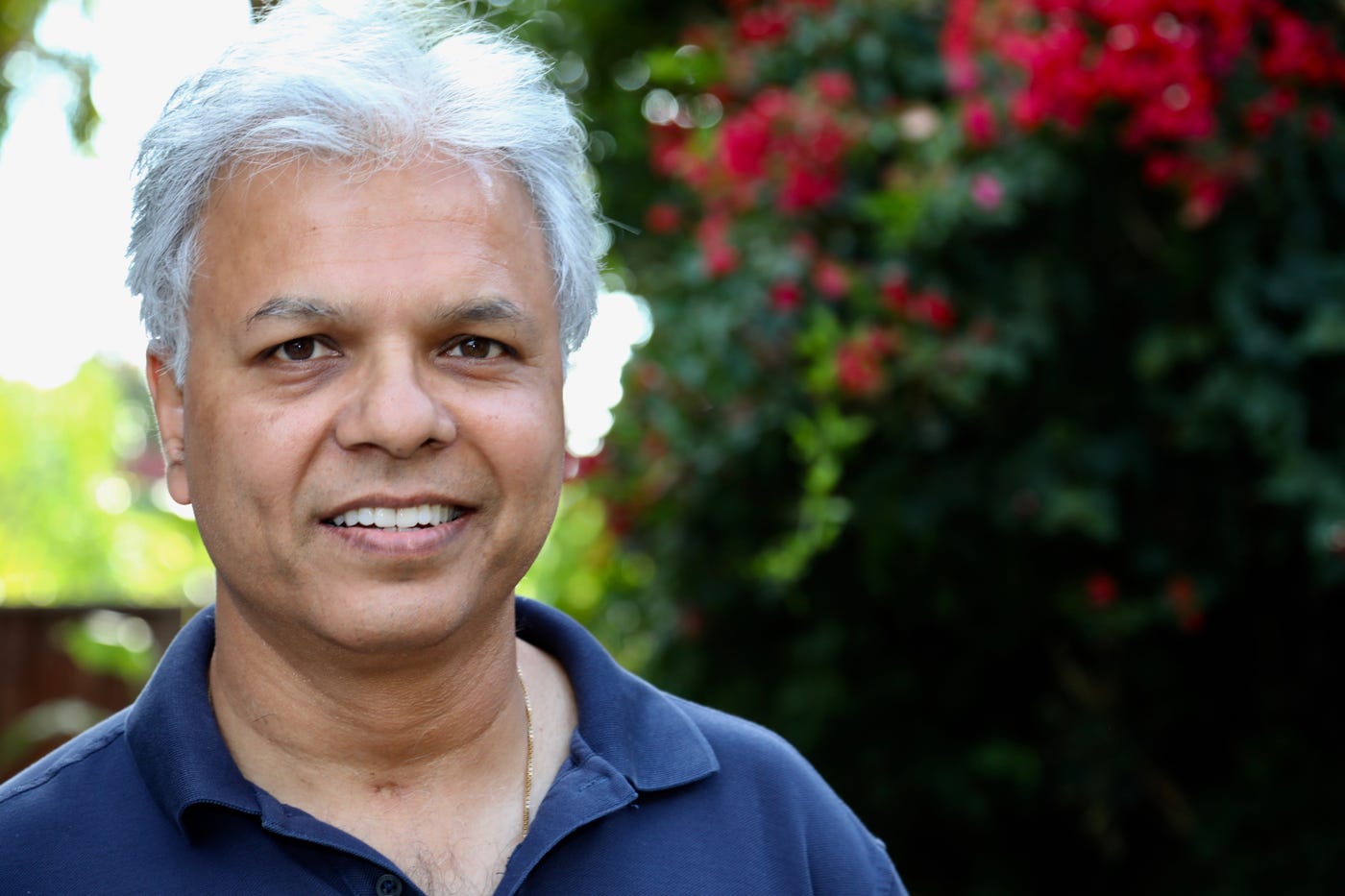 If autonomous vehicles are ever going to replace human-driven cars and trucks, they’re going to need to be able to recognize everything from a traffic light to a traffic cone in less than a blink of an eye.

But those cars are also going to need to process all that visual information efficiently, without consuming massive amounts of power — especially as increasing numbers of vehicles run on limited-capacity electric batteries.

A company that develops a chip that can do both — process lots of visual data both rapidly and using little power — could have a big opportunity in front of it. The folks behind Recogni, a San Jose-based startup, think they’ve done what no other company has to date.

“We saw this as a clear opportunity for us to solve the problem,” Ashwini Choudhary, the startup’s cofounder and chief business officer, told Business Insider in a recent interview.

Recogni has designed a chip that it says can perform 1,000 tera (which is to say, 1 trillion) operations per second (TOPS), an industry standard measurement. The chip can do that while only requiring 5 watts of power. By contrast, Tesla made a lot of noise earlier this year when it unveiled its own self-driving car chip that it says will offer a total of 72 TOPS (with two 36-TOPS artificial-intelligence processors) while consuming 72 watts, total, including its main and graphic processors.

Read this: Tesla claims it has made the ‘best chip in the world’ for self-driving cars at its autonomy day event

“We are at least 200 times more efficient,” than those chips, he said.

Recogni is focusing on compression

Recogni has been able to make its chip both fast and efficient essentially by focusing on compressing both the data coming out of the digital cameras used to detect objects around the car and the models the chip uses to identify those object.

The reason why other AI chips for self-driving cars consume so much power is that they store the image data and the models they use to identify objects on a separate memory module, Choudhary said. Shuttling data back and forth between the chip and memory storage expends a lot of energy, he said.

By contrast, Recongi’s system is able to shrink the image sensor data and the object models enough so that they can be stored on its AI chip, rather than on a separate memory module, he said. Recogni’s system compresses the image data so much that it requires 16 to 20 times less space than other systems, he said.

“We said that we cannot really do” what other chipmakers were doing, he said. “We said, ‘This is not the way,'” he continued, “‘We need to change the rules.'”

It thinks its system can make lidar unnecessary

The startup plans to sell its chips as part of a module that will include a bevy of image sensors — a monochrome one, an infrared one, and three color ones. Its system will also be able to extract and support data that comes from a radar or lidar system, Choudhary said.

But the company believes that its system will be able to provide autonomous vehicles with information about the distance of objects just from its image sensors, rather than having to rely on pricey lidar systems for such data. Other companies, including Tesla, are also working on self-driving car systems that don’t require lidar, because the cost of the laser-based depth sensors can be tens of thousands of dollars far too expensive to use in a car targeted at a mass market.

Recogni plans to start producing production-ready samples of its chips in the second half of next year, Choudhary said. It already has simulations of them running on Google’s cloud.

The company now has the chance to make its vision a reality. It recently closed a $25 million Series A funding round that was led by GreatPoint Ventures. The company plans to use the new funds to bulk up its staffing, particularly in engineering, Choudhary said. Recogni has about 17 employees now; it expects to have around 60 by the end of the year, split between its Bay Area and Munich offices, he said.

In order for autonomous vehicles to make sense of the world around them, they’re going to need to be able to process lots of image data quickly and efficiently.

“That’s where we come in,” Choudhary said.

Here’s the pitch deck Recogni used to raise its $25 million funding round: 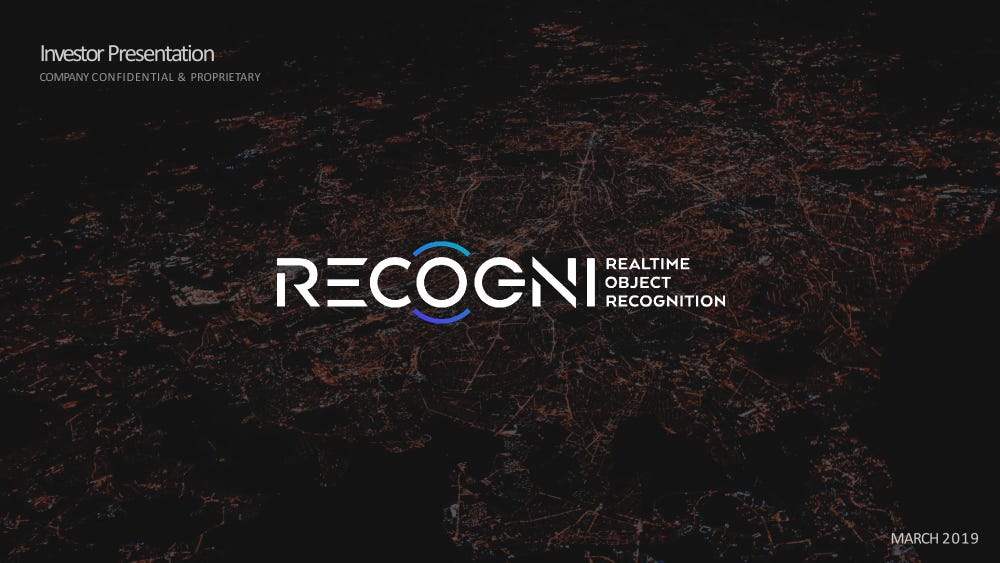 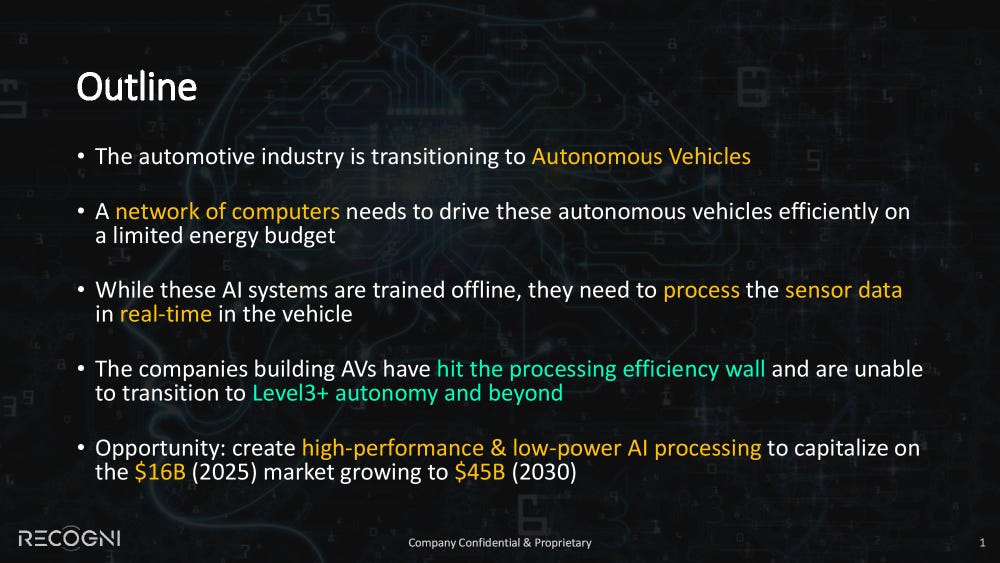 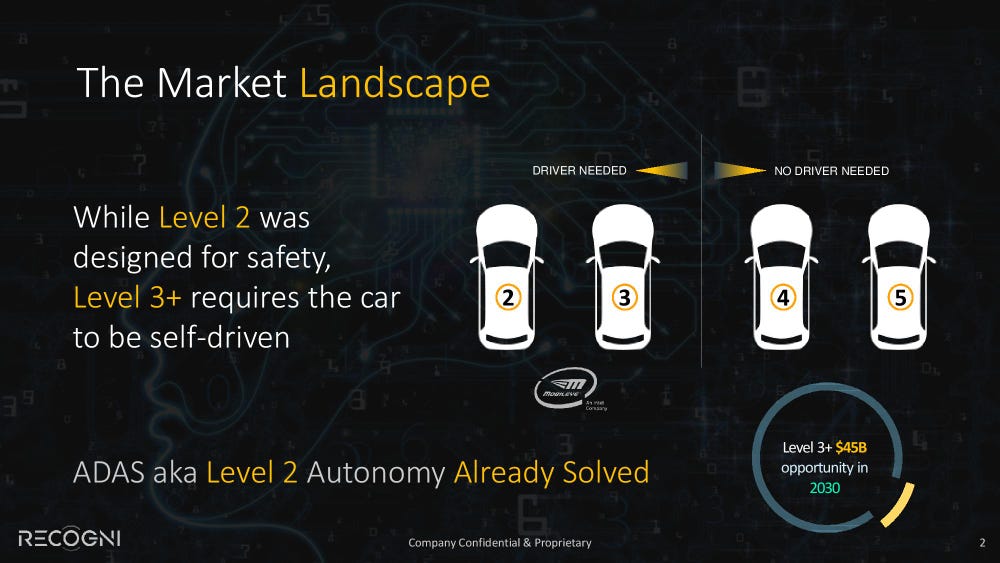 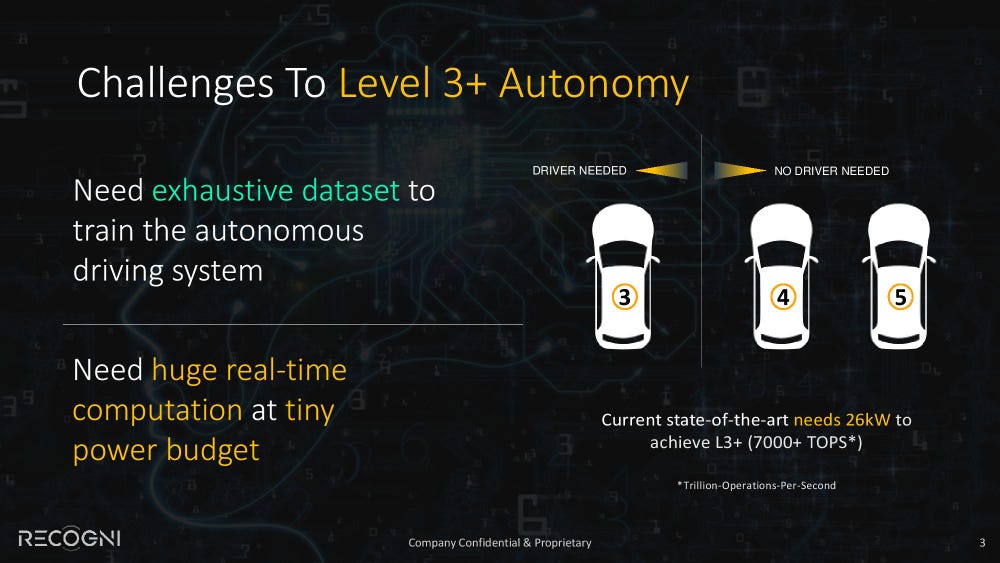 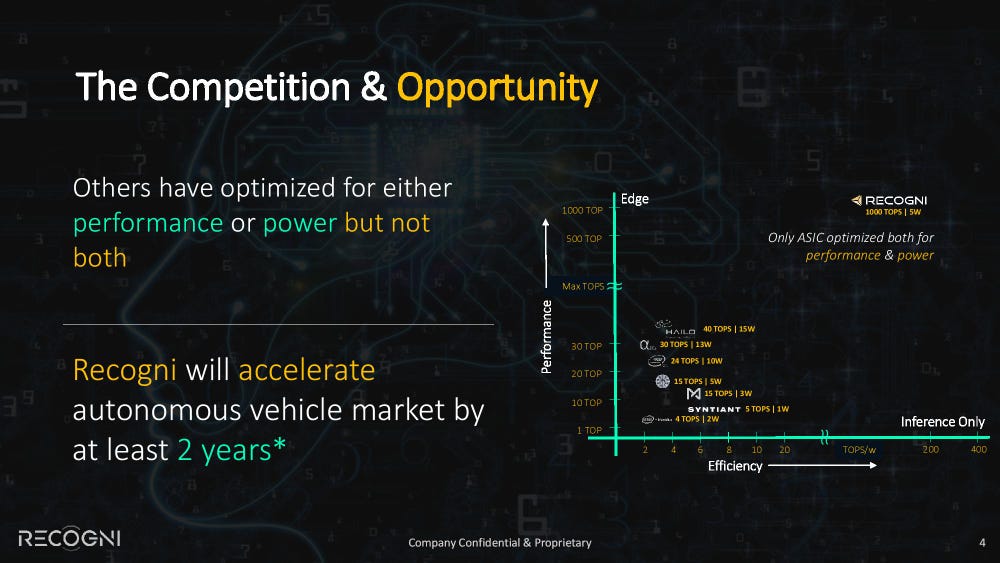 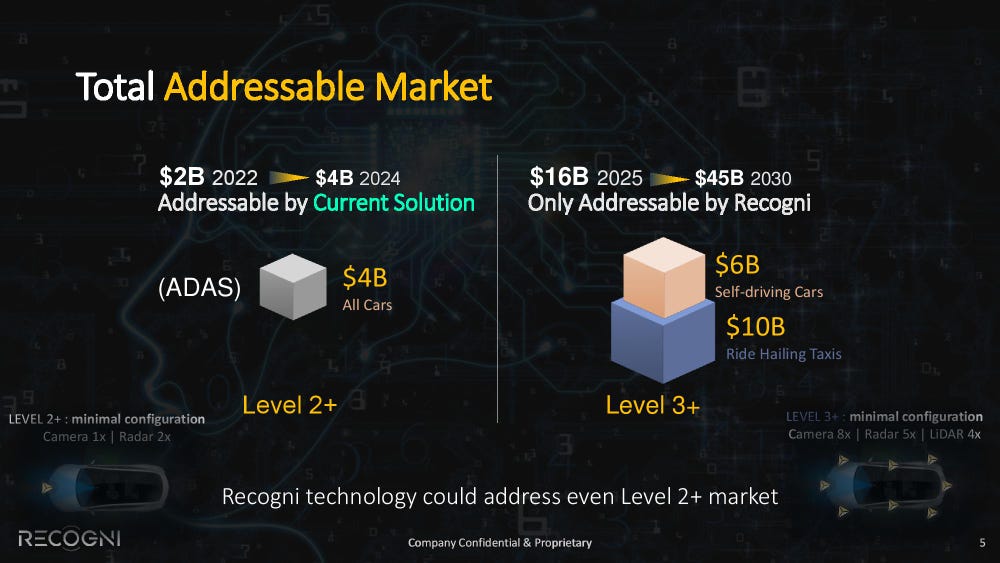 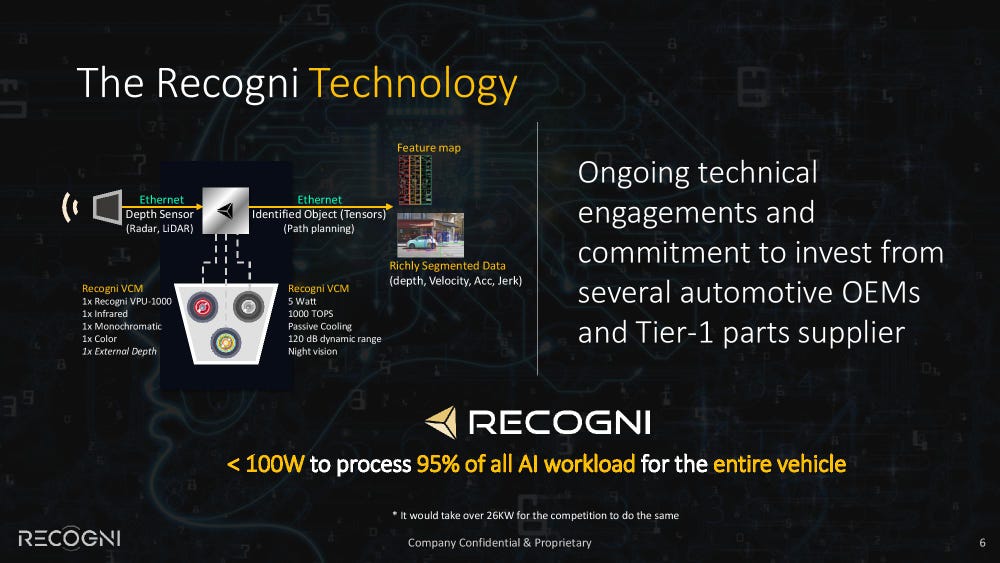 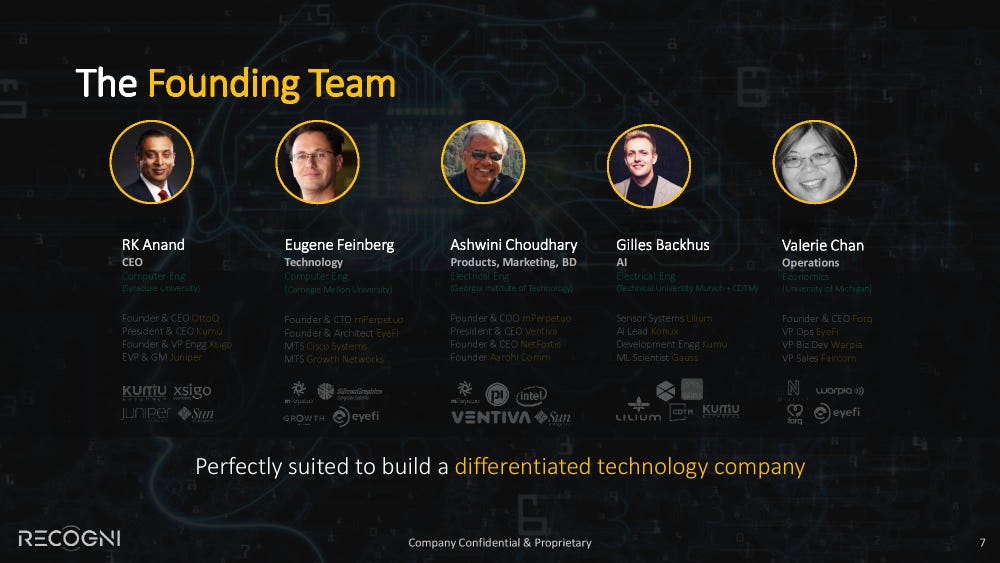 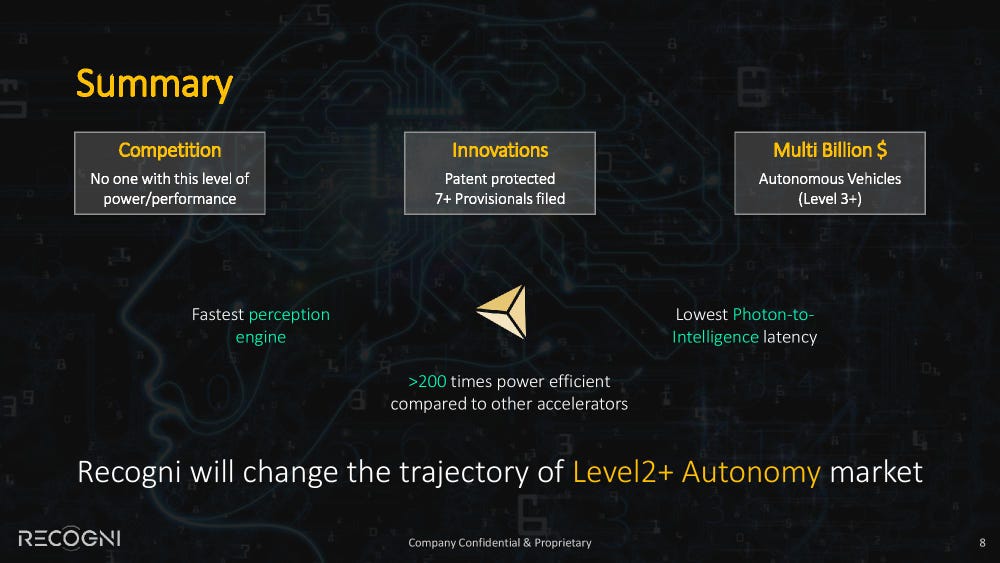