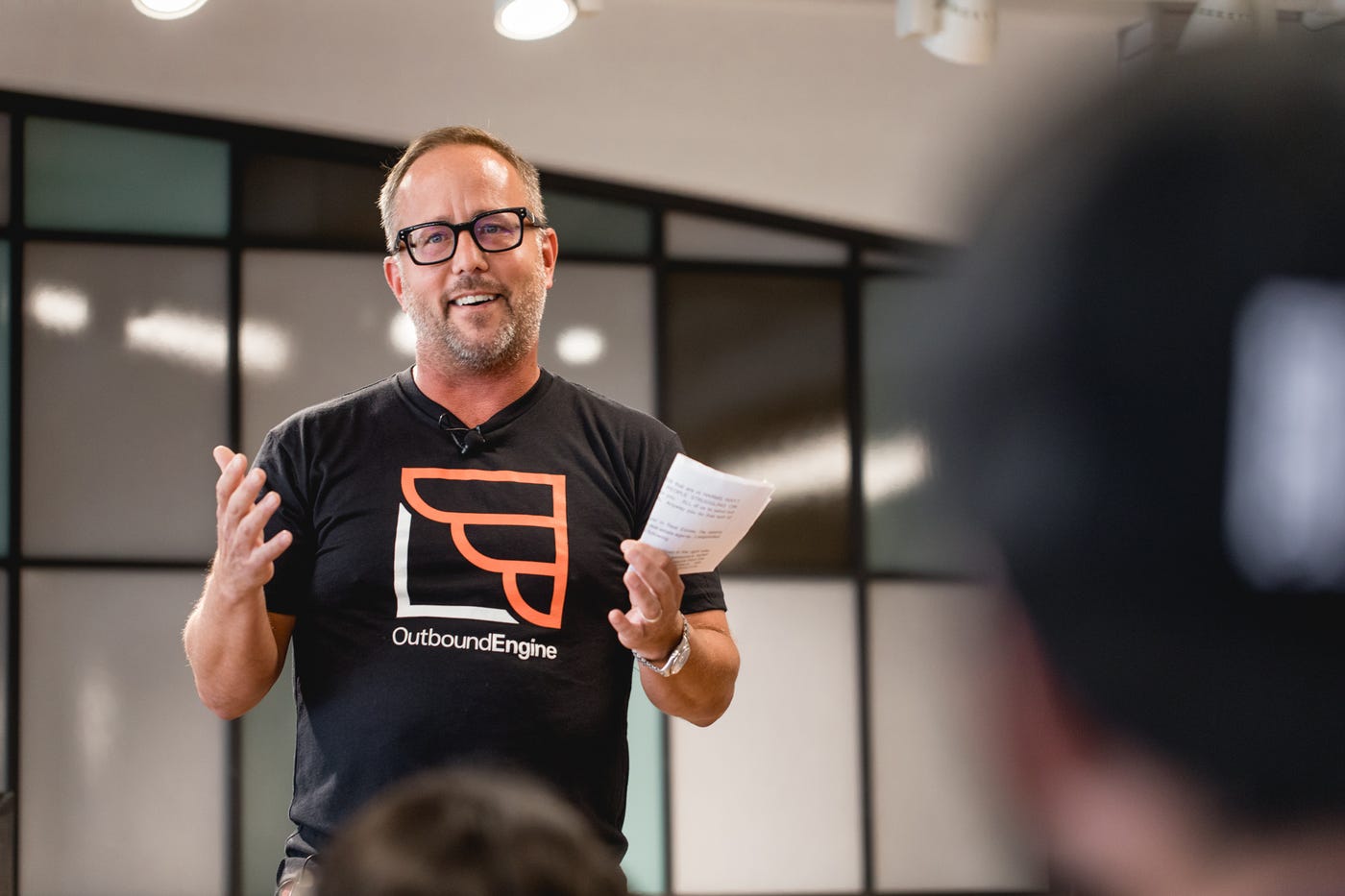 OutboundEngine has thrived by focusing on businesses on the opposite end of the spectrum, in terms of size.

The Austin, Texas-based startup offers digital marketing services for small and medium-sized businesses, concentrating in particular on sole practitioners, independent insurance and real estate agents, and other companies with no or few employees. OutboundEngine sets up websites for such businesses and operators, helps them set up and maintain a presence on social media sites, and assists them with email marketing campaigns.

OutboundEngine has “built a software platform that does all of the important things for our customers,” said CEO Marc Pickren. After they’ve signed on and set up the service, he continued, customers are “just rocking and rolling. They can just relax and have their marketing done for them.”

Founded in 2012, OutboundEngine tries to make its service as easy to use as possible for its customers, Pickren said. The company, which charges between $200 and $500 a month for its services, writes the marketing content on behalf of its clients and distributes it for them. Customers can upload their company logos and photos to the service for use on their websites and marketing, but OutboundEngine only offers them limited choices to customize their sites.

That’s intentional, Pickren said. Many of its clients aren’t technologically savvy, he said. What’s more, small business owners and sole practitioners often don’t have the time or the bandwidth to decide the precise color to use on their website or which specific marketing strategy to pursue, he said.

“They’re not equipped to make decisions regarding those different marketing tools or different things that are available,” Pickren said. “The operative word there is ‘equipped.’ It’s not that they’re not smart enough and they couldn’t figure it out. It’s just that they’re busy running their business.”

Pickren is overseeing a massive expansion

The limited amounts of customization OutboundEngine does offer are items that customers actually use, and that provide value, he said. That’s important, because many of its clients have been burned by taking others’ advice on how to marketing their businesses online, only to see such efforts fail, he said.

“We’re not in the business of constantly adding shiny blinky things because they’re cool and everybody else is selling them,” Pickren said. “We’re in the business of doing the things that work and doing them consistently and reliably every single month.”

OutboundEngine has found a ready audience for its services. It has some 10,000 customers spread all over the US and it’s now seeing $24 million in annualized sales, he said.

But Pickren thinks the company has plenty of potential ahead of it. About 98% of all US businesses have fewer than 20 employees, if those with no employees at all are included. But for most of its existence, OutboundEngine, which has some 203 employees, has concentrated on those in only around a dozen industries, such as real estate, insurance, and home services.

Pickren, who joined the company last year, is leading the charge to massively expand its services to new industries. By the end of the year, the company plans to offer its marketing software for companies in 400 different categories of business, he said.

Toward that end, OutboundEngine in August raised $14 million in debt and equity financing. The company, which has raised $50 million total to date, plans to use the new funds in part to do its own marketing to all the potential customers to which it’s now opening its service, he said.

Small businesses have “really been underserved as it relates to digital innovation,” Pickren said. He continued: “They should be getting more of an opportunity to achieve success on their own terms and not get left behind.”

Here is the pitch deck OutboundEngine used to raise its latest found of financing: 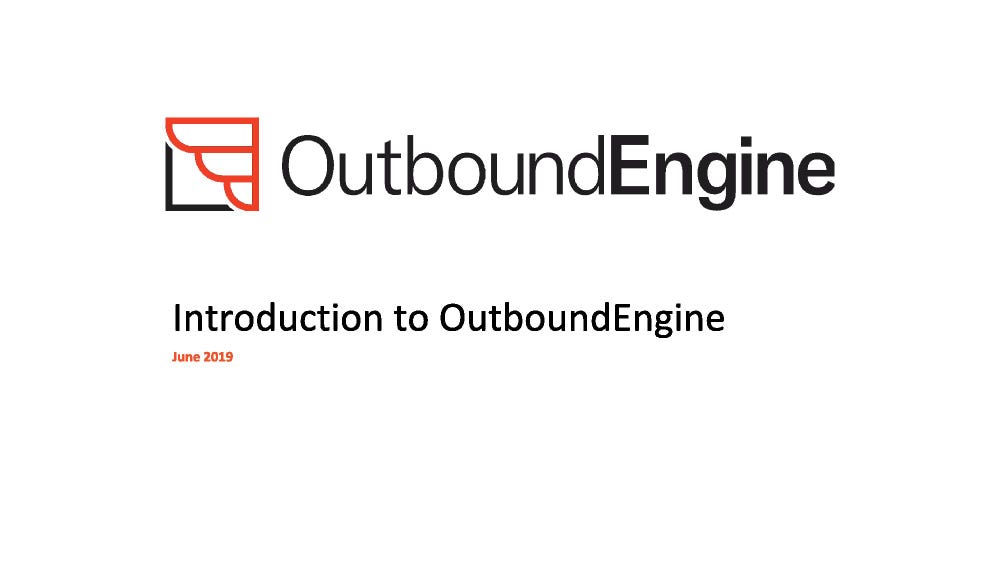 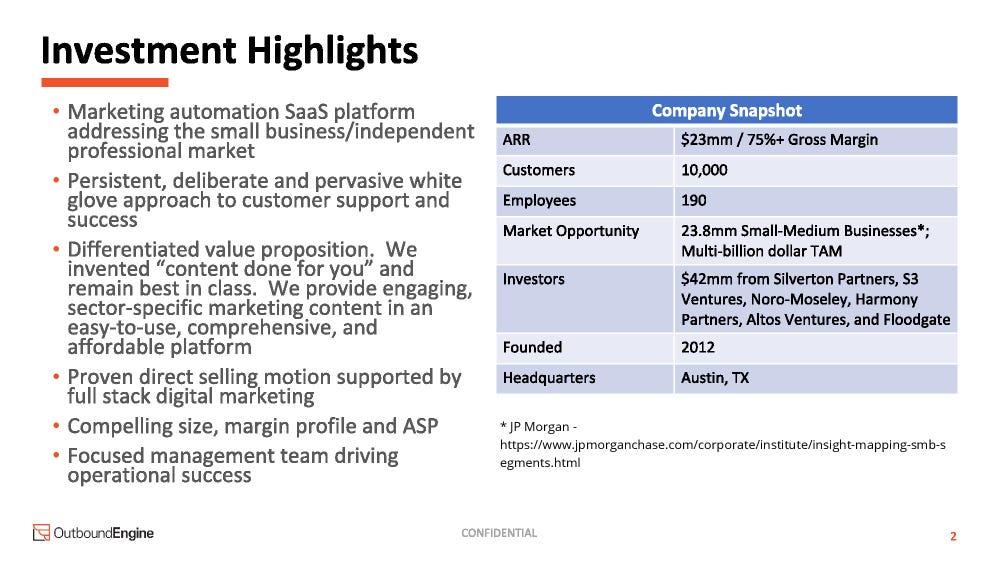 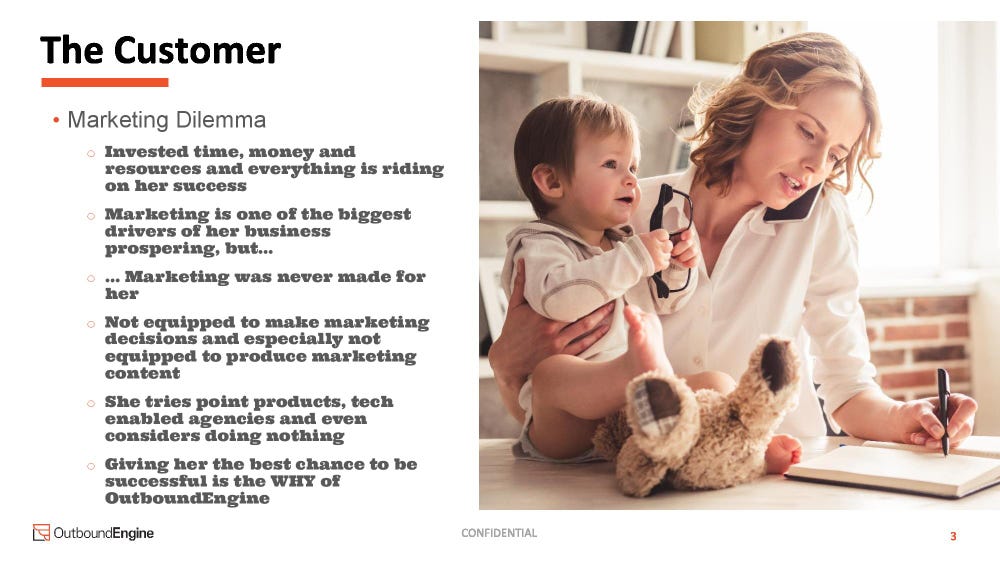 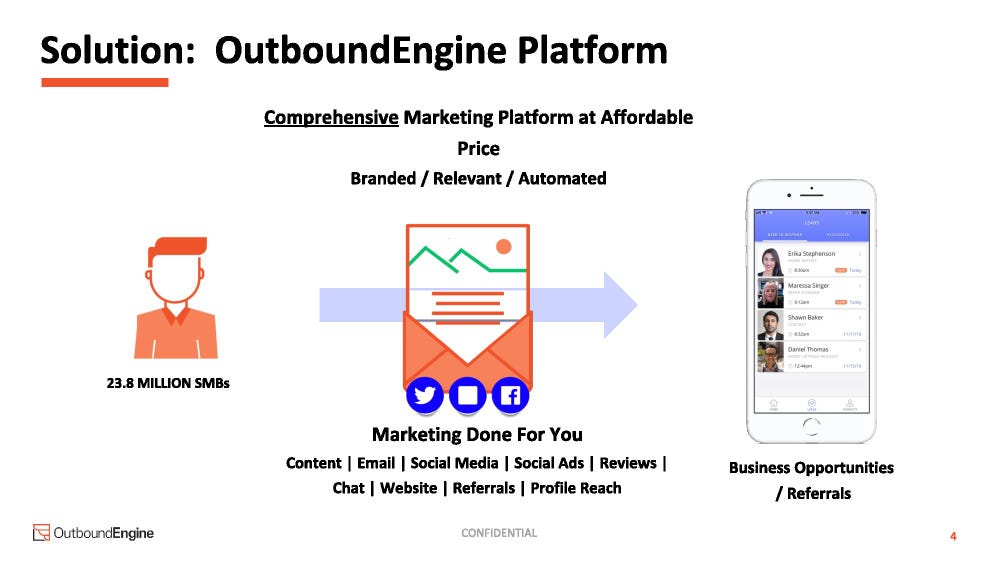 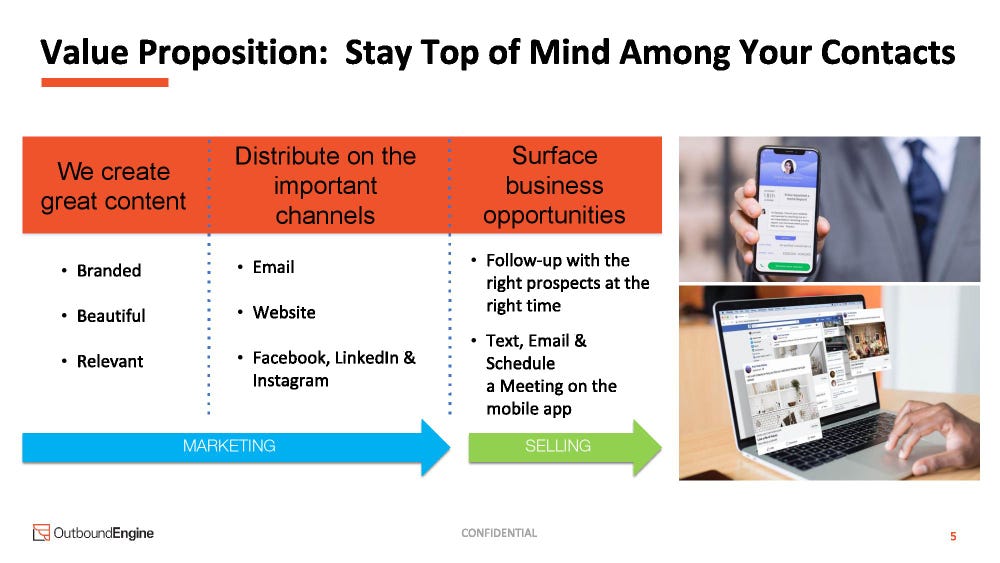 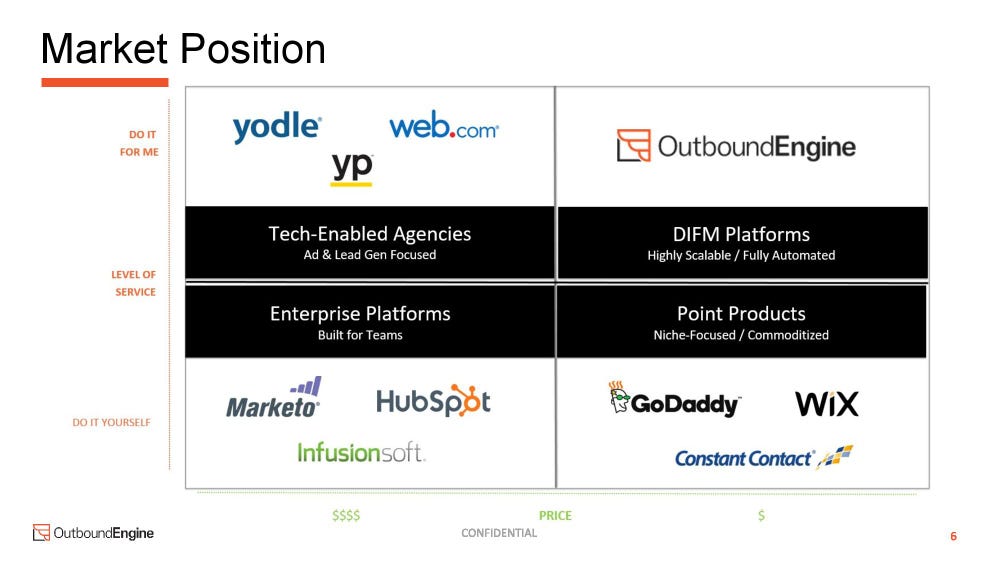 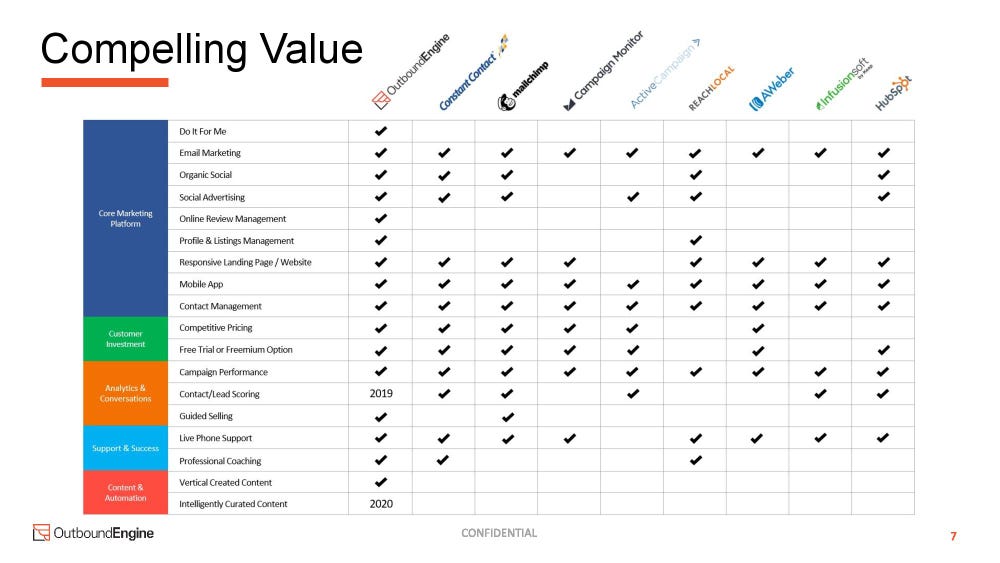 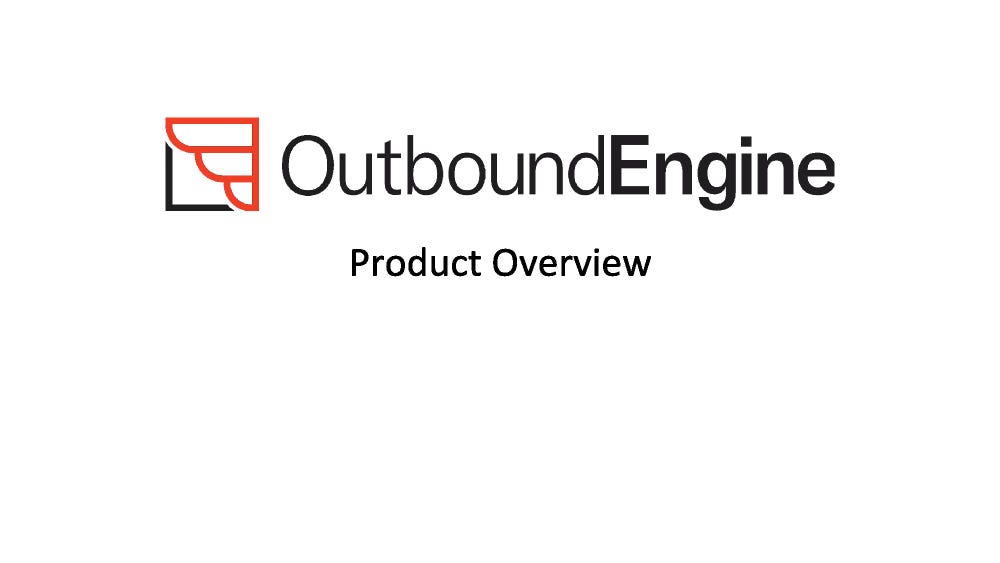 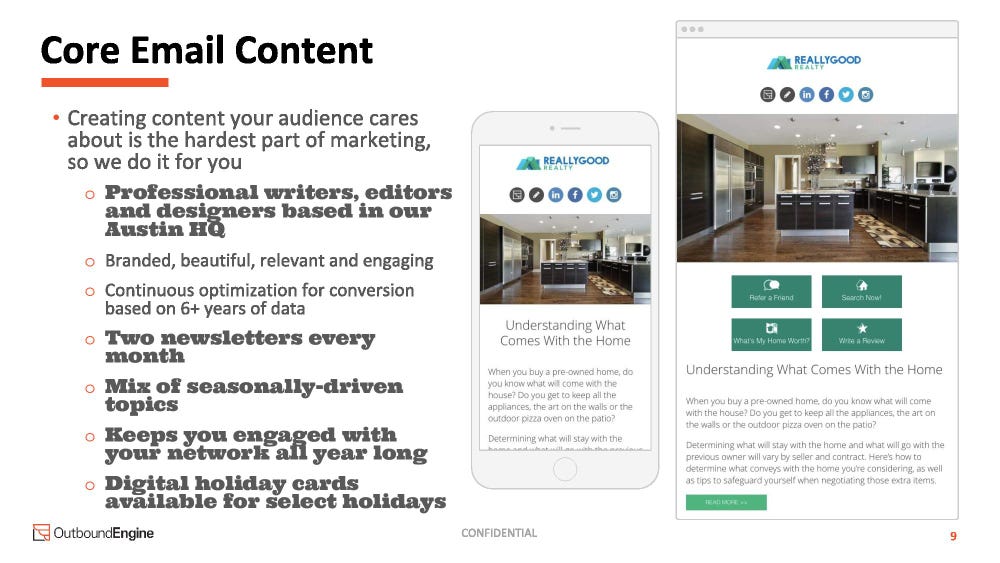 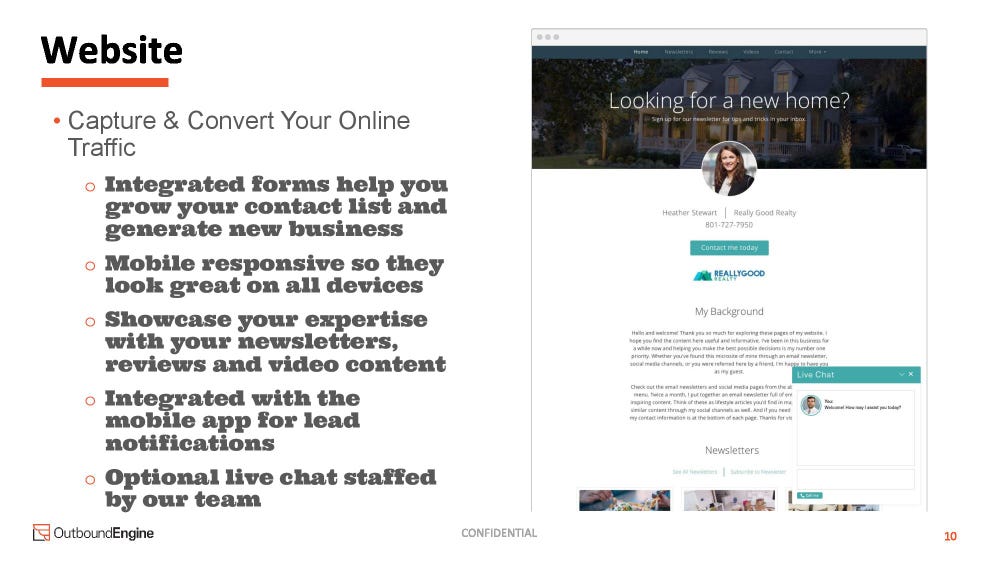 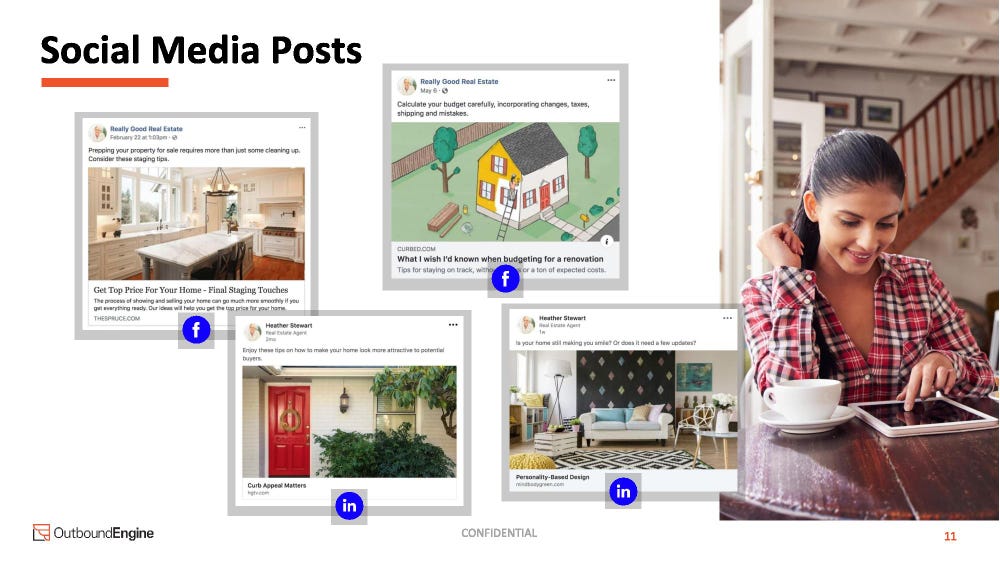 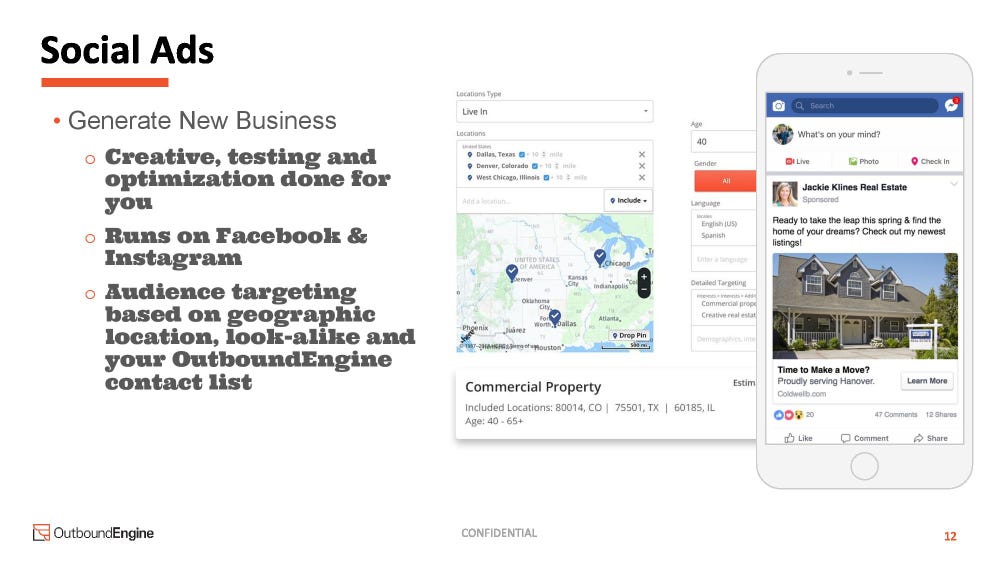 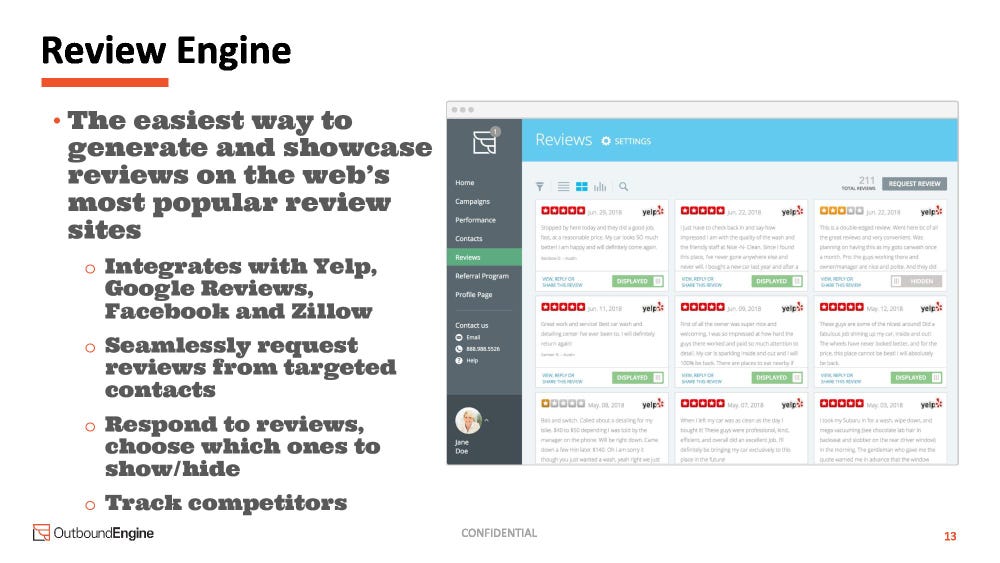 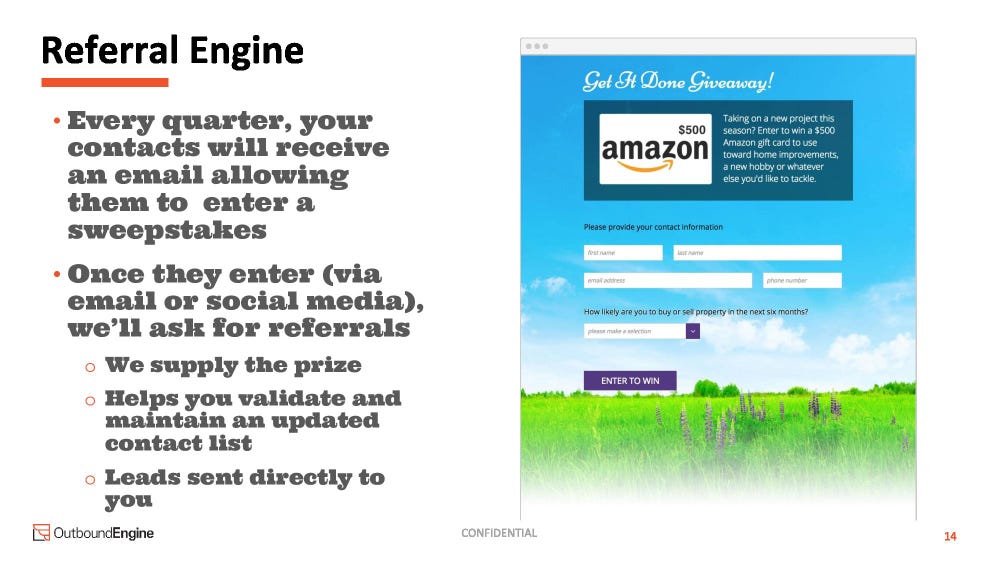 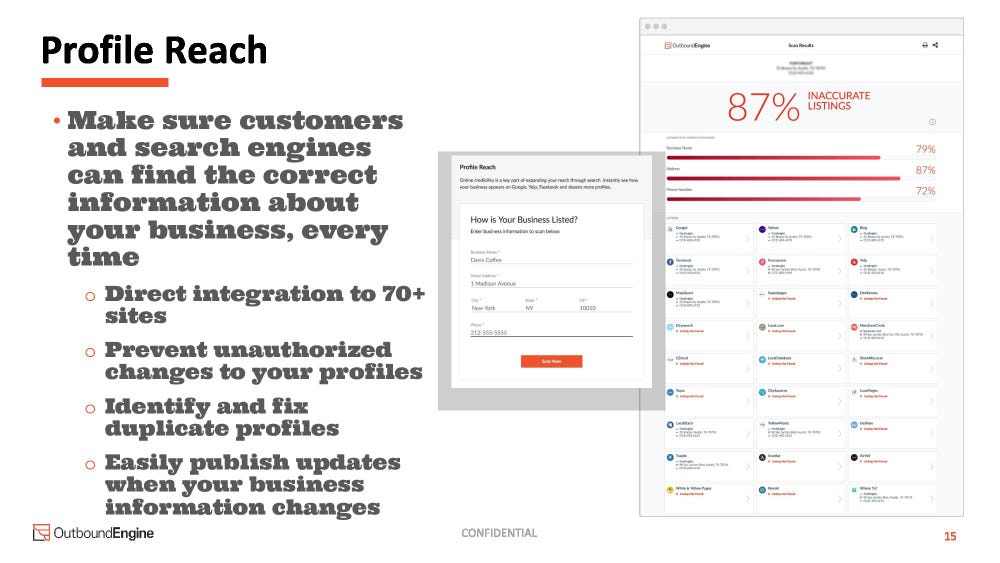 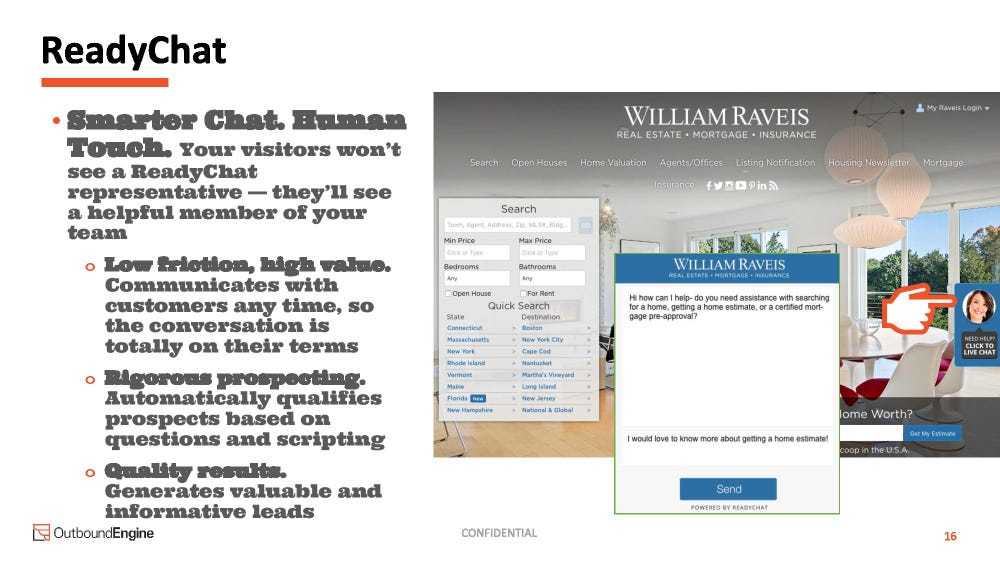 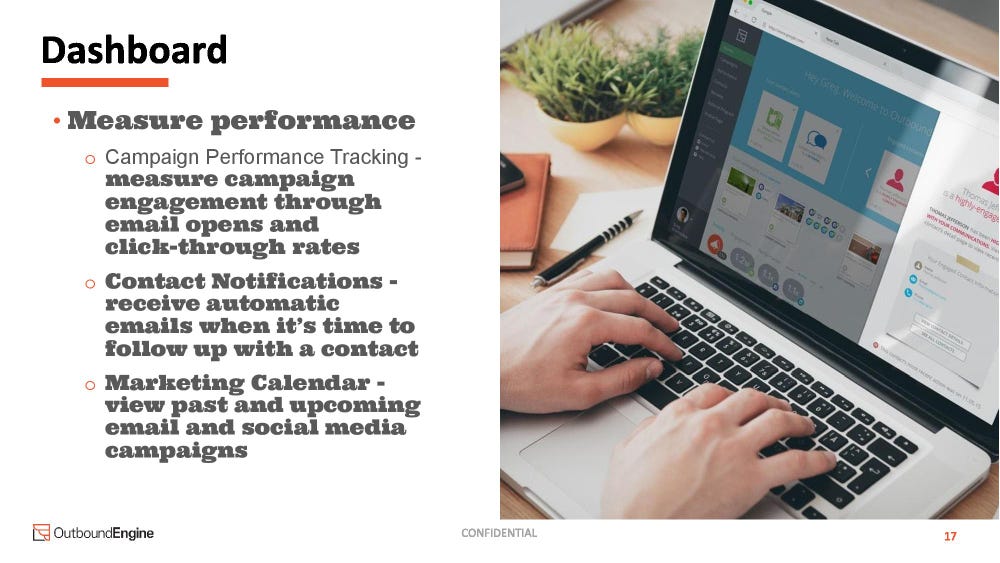 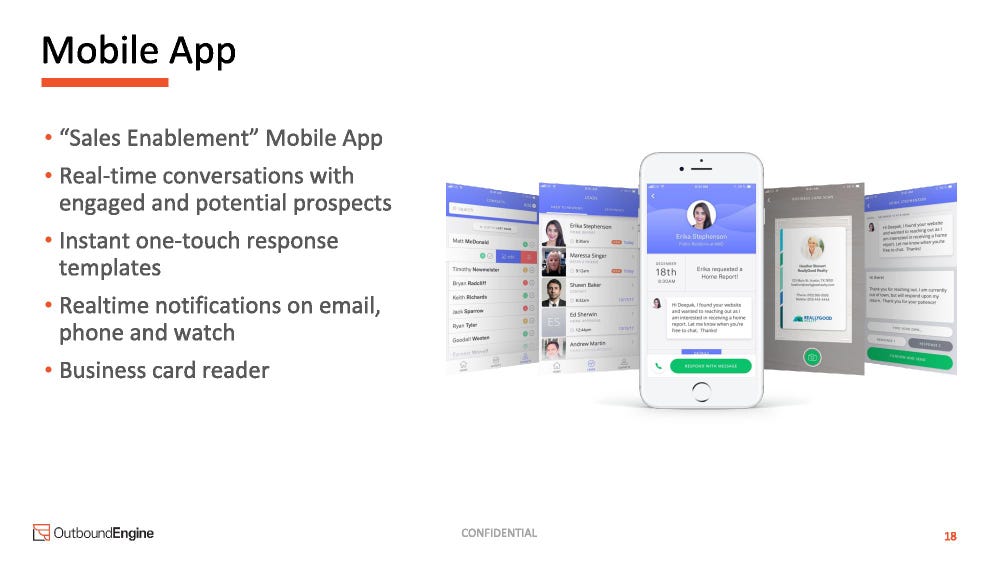 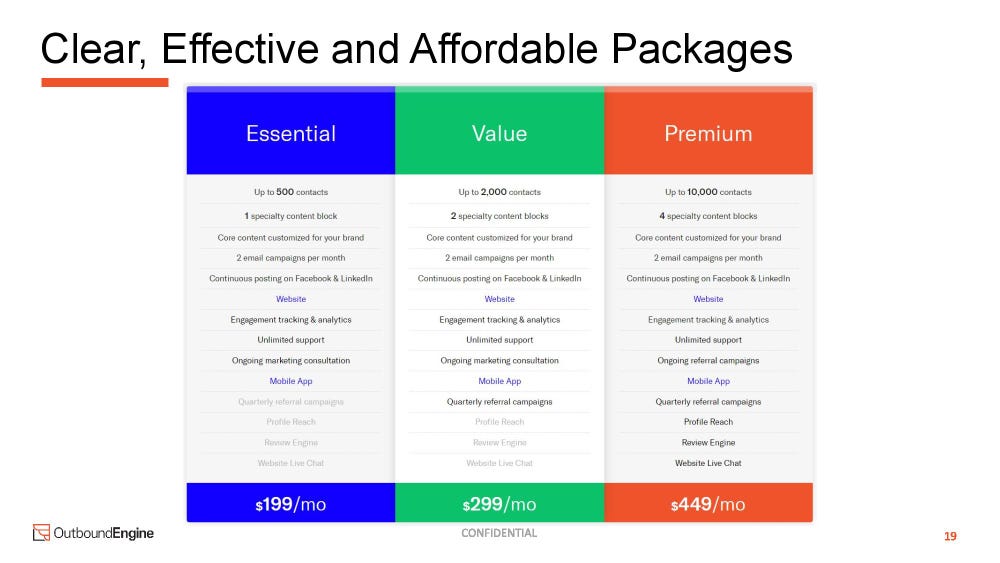 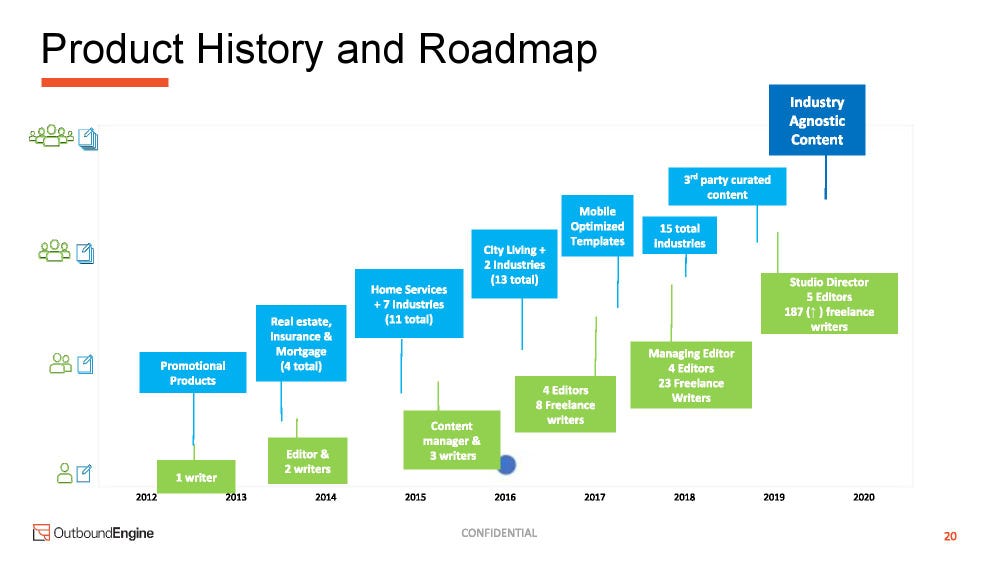