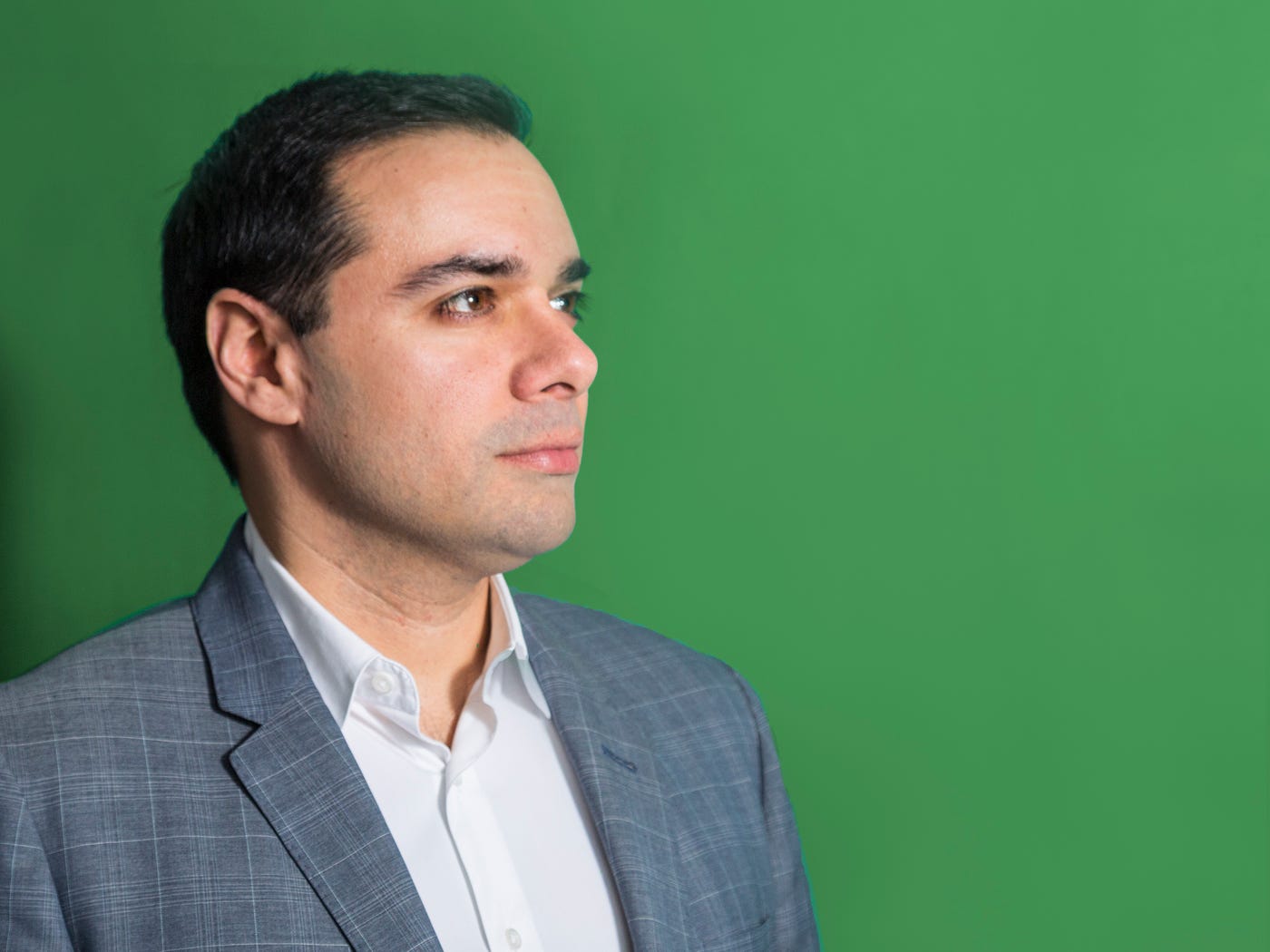 OpenFin, which calls itself the operating system of finance, said Thursday that it had raised $17 million in its Series C fundraising round that was led by Wells Fargo, with participation from Barclays.

Designed to sit one layer above a computer’s native OS, OpenFin is a platform where software applications can be deployed safely, seamlessly, and quickly. It’s used by banks and asset managers to allow traders and portfolio managers to begin using a collection of apps in a way that begins to look and feel like the experience consumers have come to expect from their mobile devices.

“OpenFin is building the roads, bridges and communications infrastructure for financial apps that will allow capital markets to innovate like Silicon Valley,” Matt Harris at VC firm Bain Capital Ventures and an OpenFin board member said in a statement.

OpenFin plans to use its new money to hire more people and expand into new products and geographies. The round brings the total funds raised by OpenFin to $40 million. The company declined to disclose its valuation.

The software already powers 1,000 applications on 200,000 computer workstations across more than 1500 banks and investment managers.

Here’s the pitch deck that CEO and founder Mazy Dar used to raise his latest round of funding. 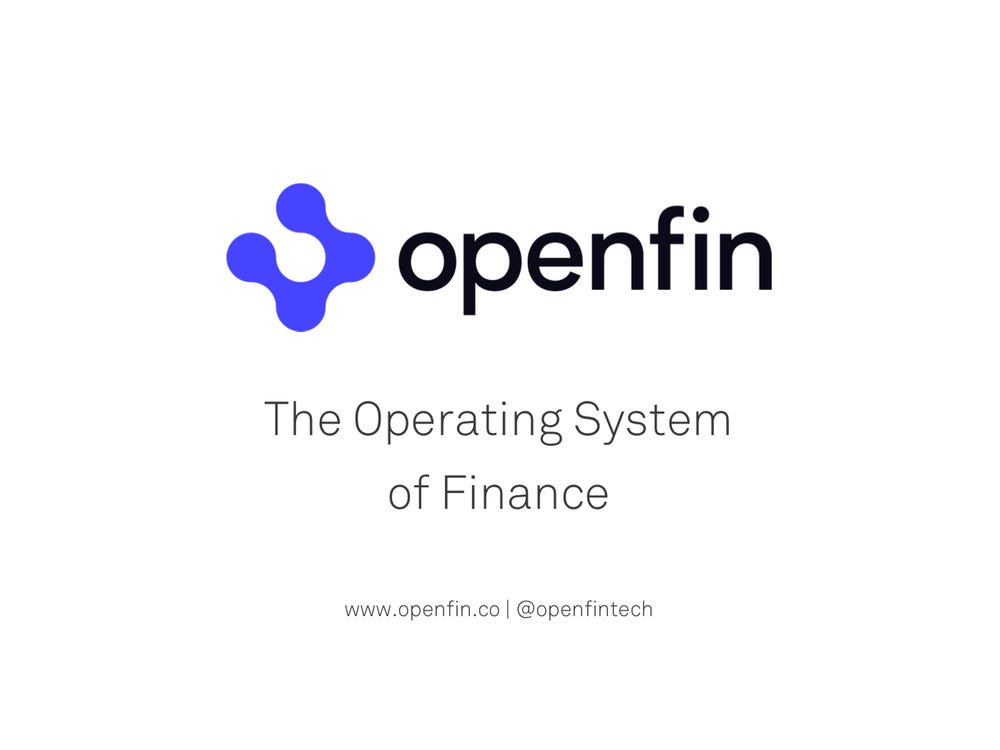 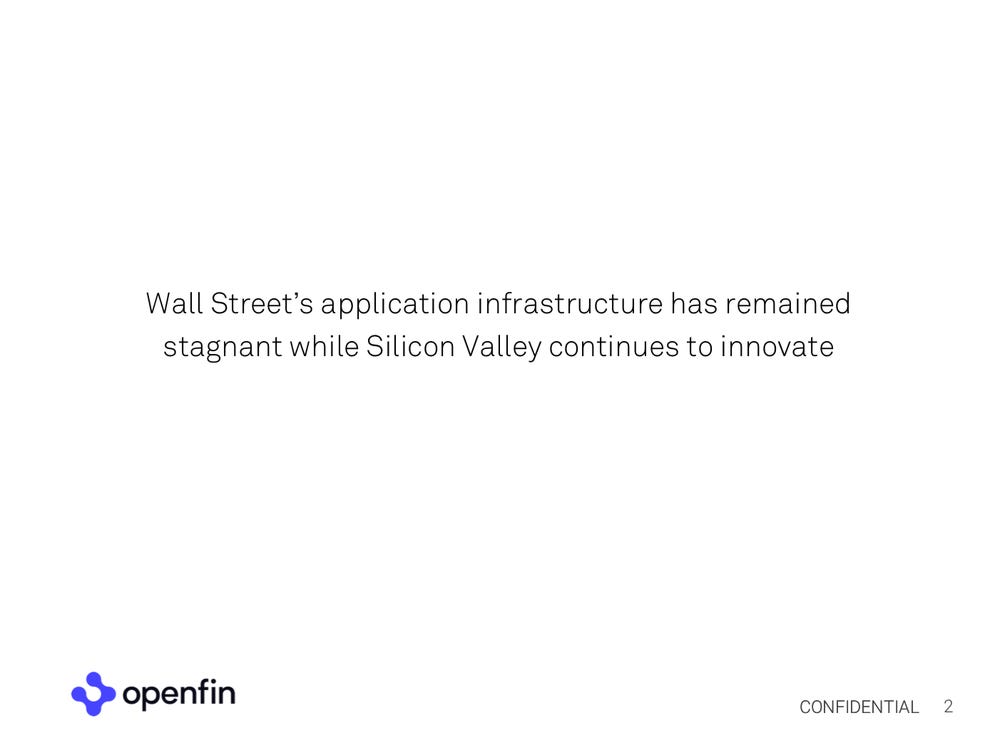 While serving old school Wall Street, OpenFin likes to position itself as an innovative force for good. 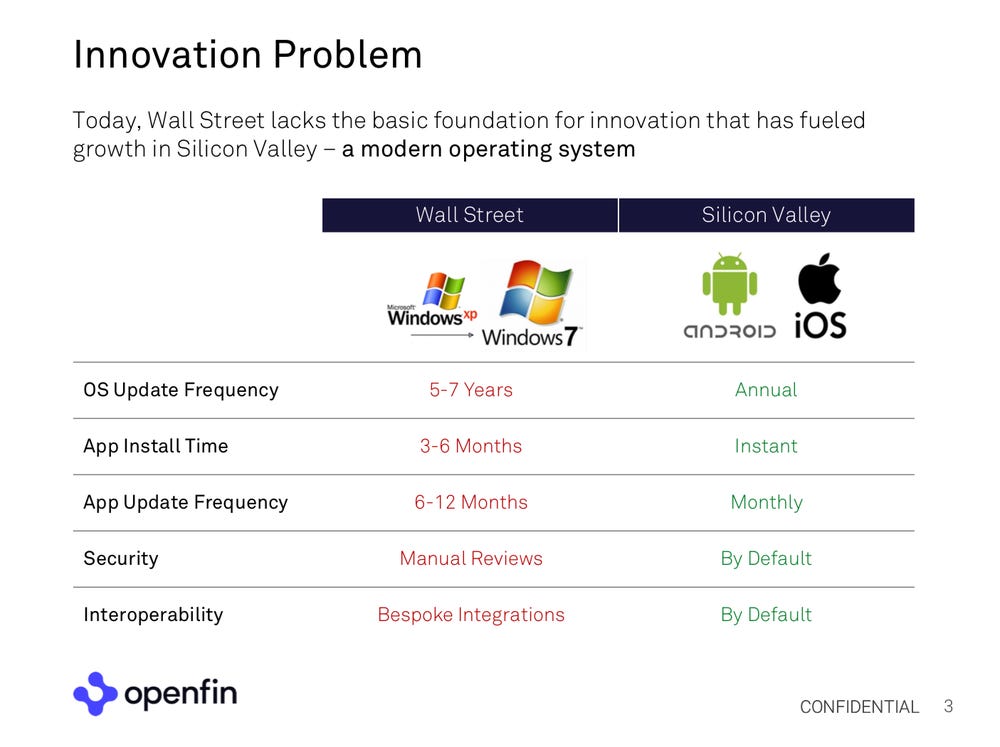 One pain point OpenFin is trying to solve is Wall Street's very slow and antiquated approach to updating software packages. 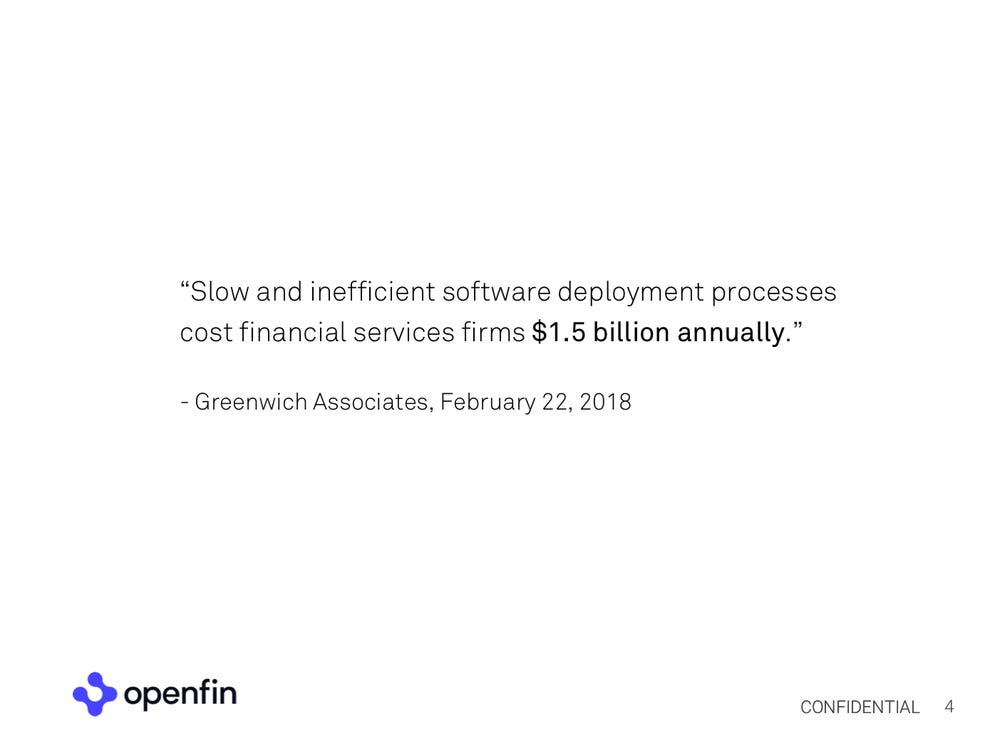 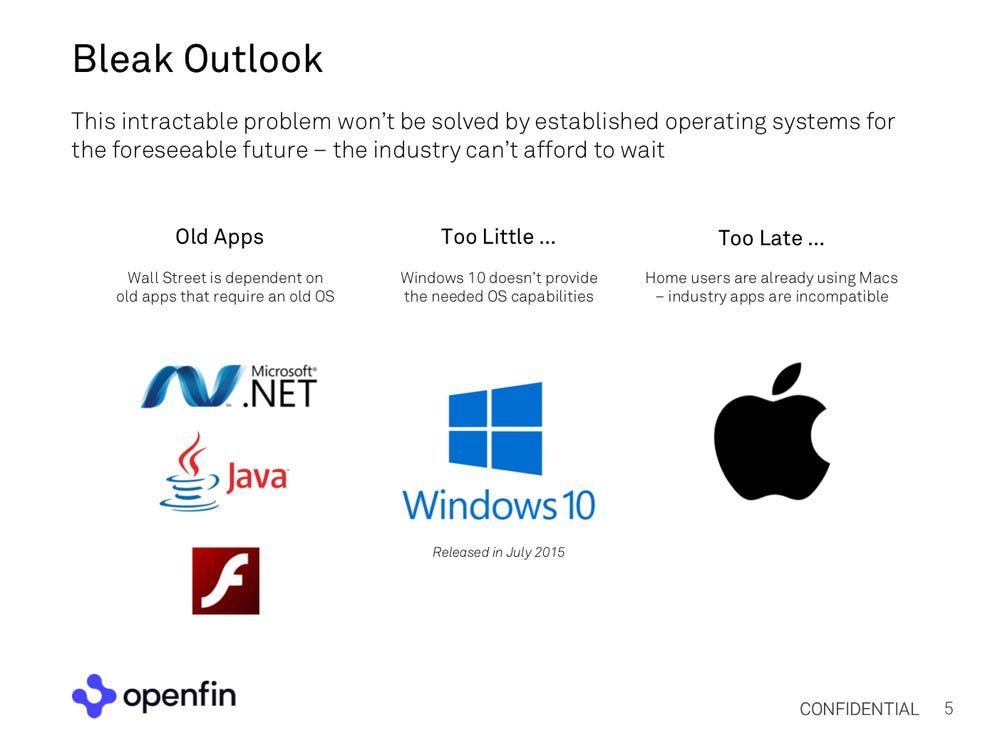 OpenFin says time is of the essence if Wall Street wants to get on the innovation band wagon. 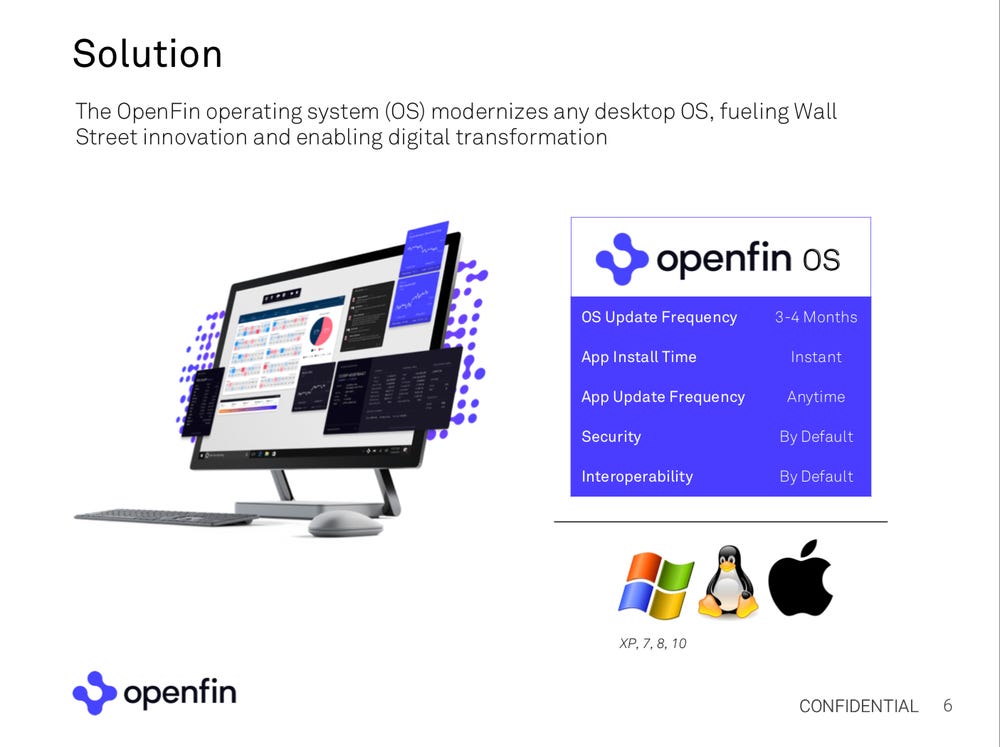 OpenFin says it has the answer. 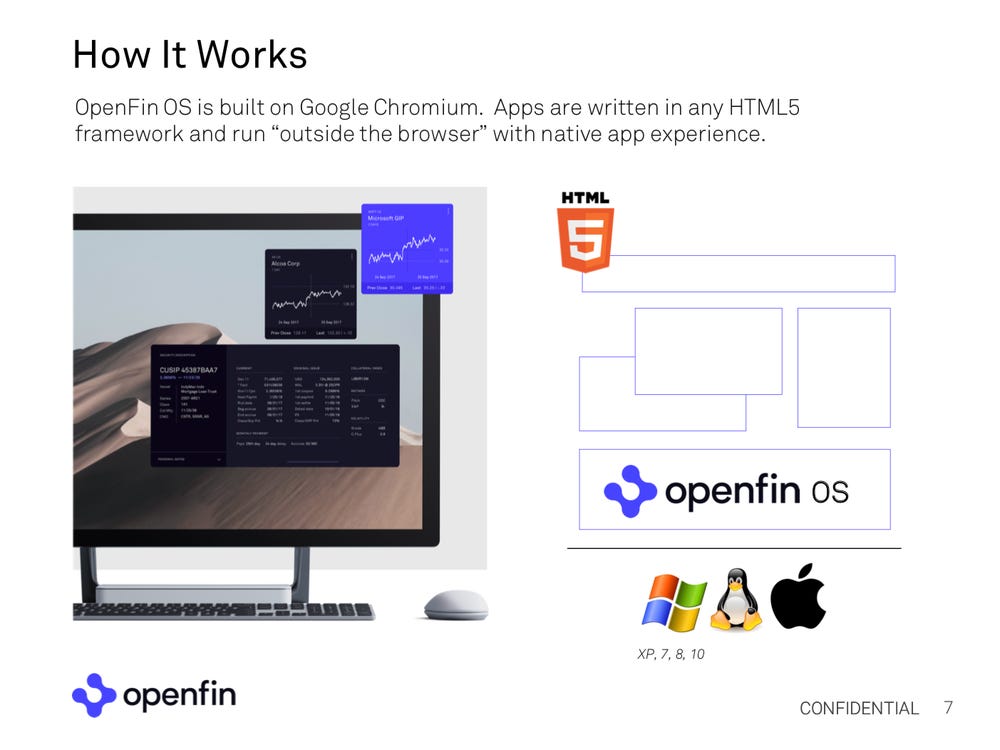 And here the startup begins to explain how it's put together. 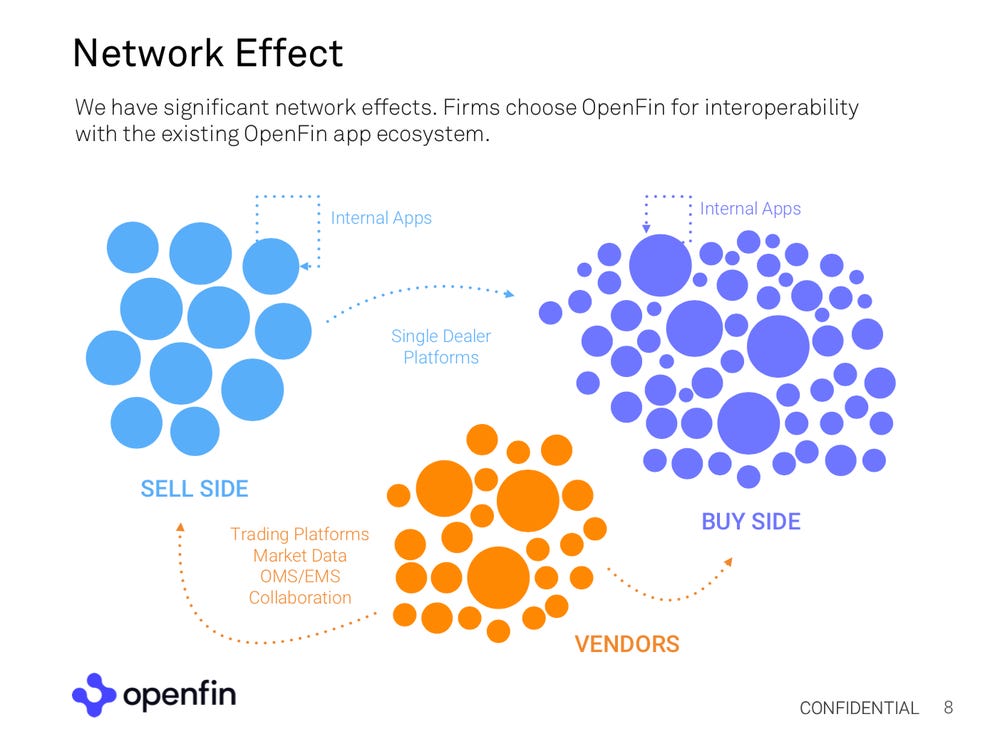 One of OpenFin's advantages is that it can make it easy for internal apps designed by banks or asset managers to interact with apps made by third parties. 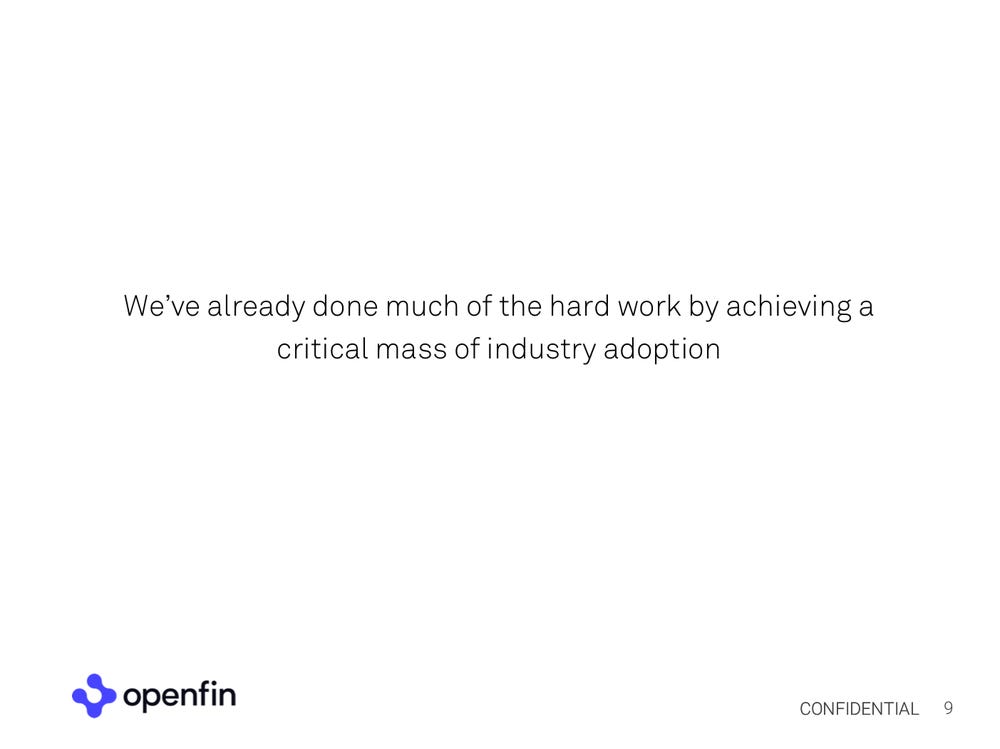 OpenFin says it has much of the industry on board. 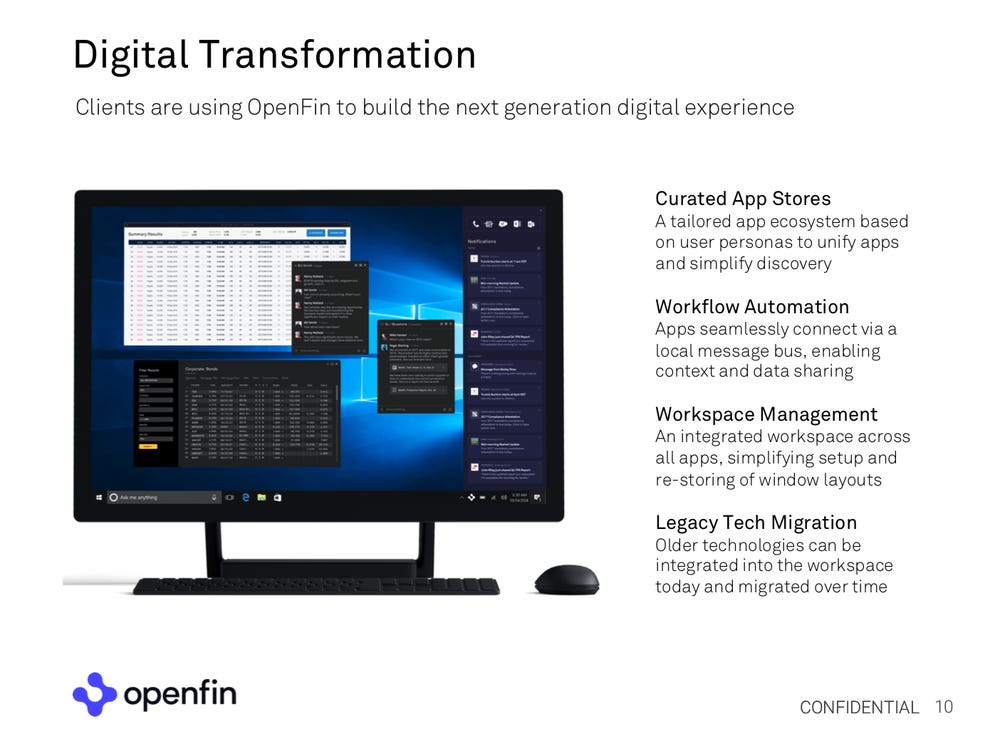 The startup makes it easy for firms to create their own curated storefront for applications, similar to Apple's App Store or Google Play. 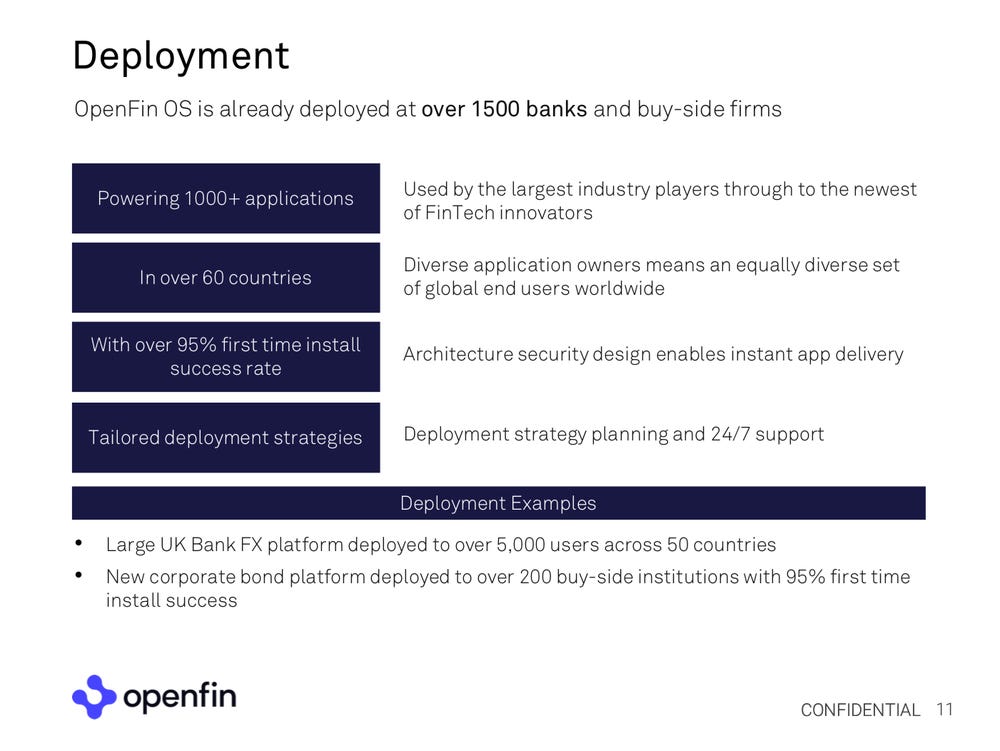 OpenFin touts some of its most successful deployments, including an FX platform already in use and new corporate bond trading tech. 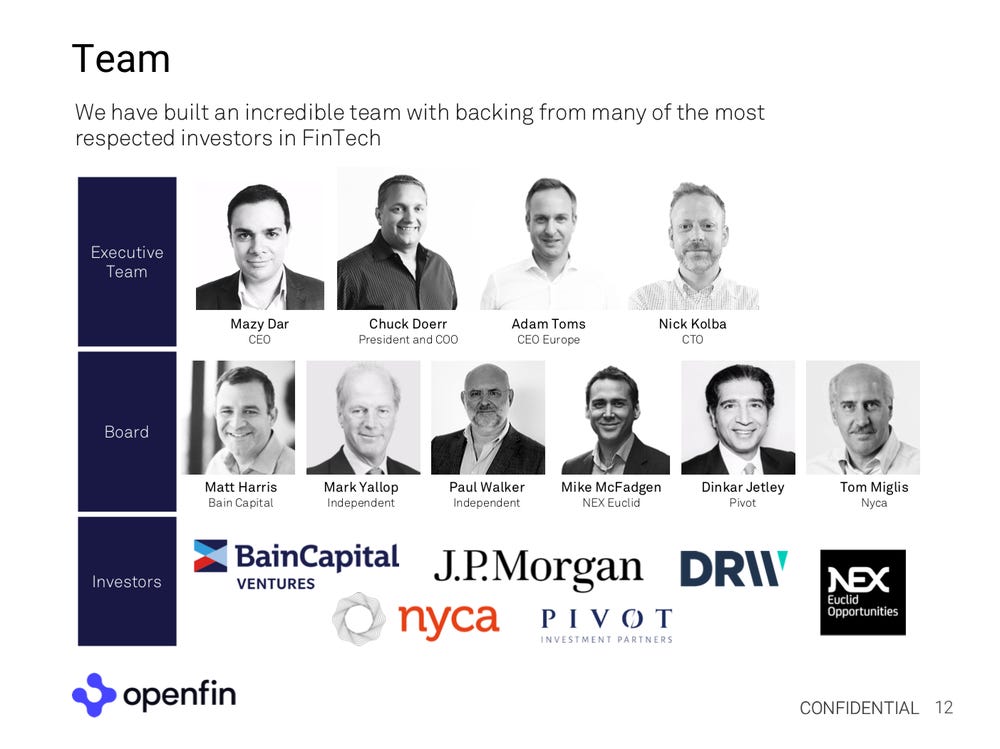 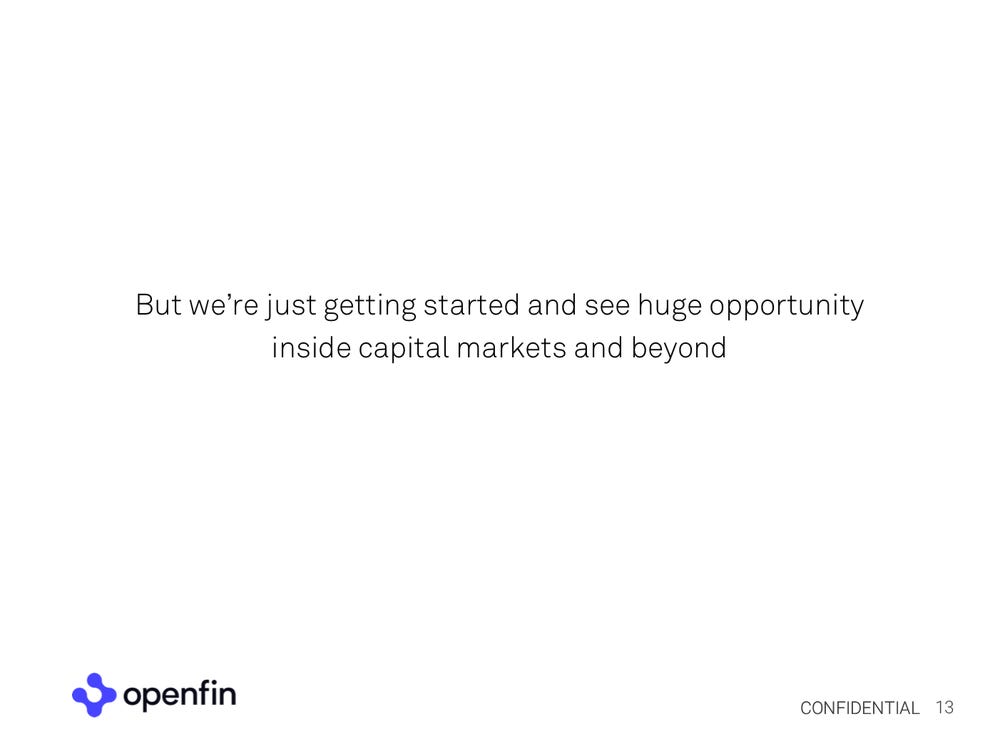 OpenFin suggests that it's beginning to look outside of Wall Street for its next growth opportunity. 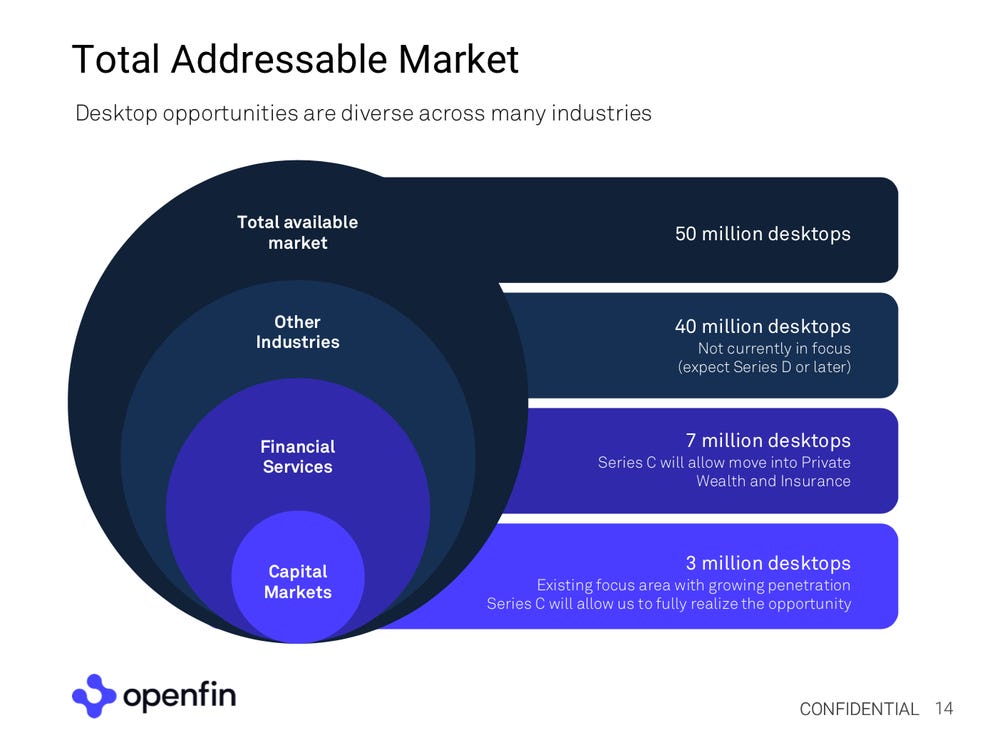 The potential market is huge.

OpenFin says it will use its new money to expand into new products and geographies, not to mention hiring more people. 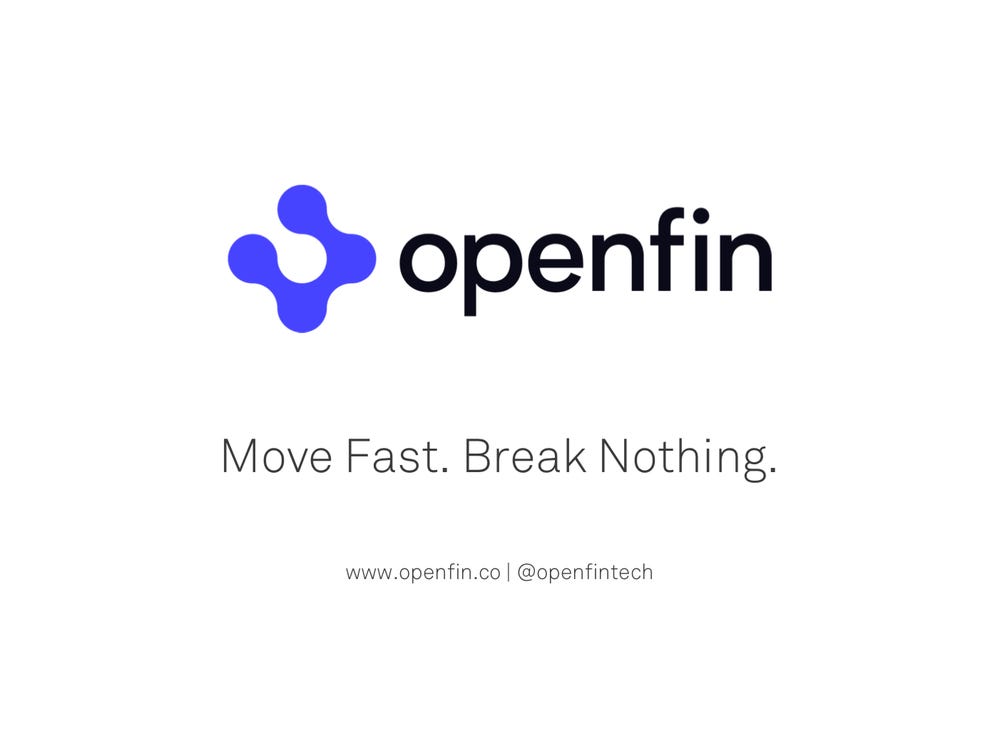 And that's it. Notice OpenFin's tag line is a riff on the old hacker slogan made famous by Mark Zuckerberg.