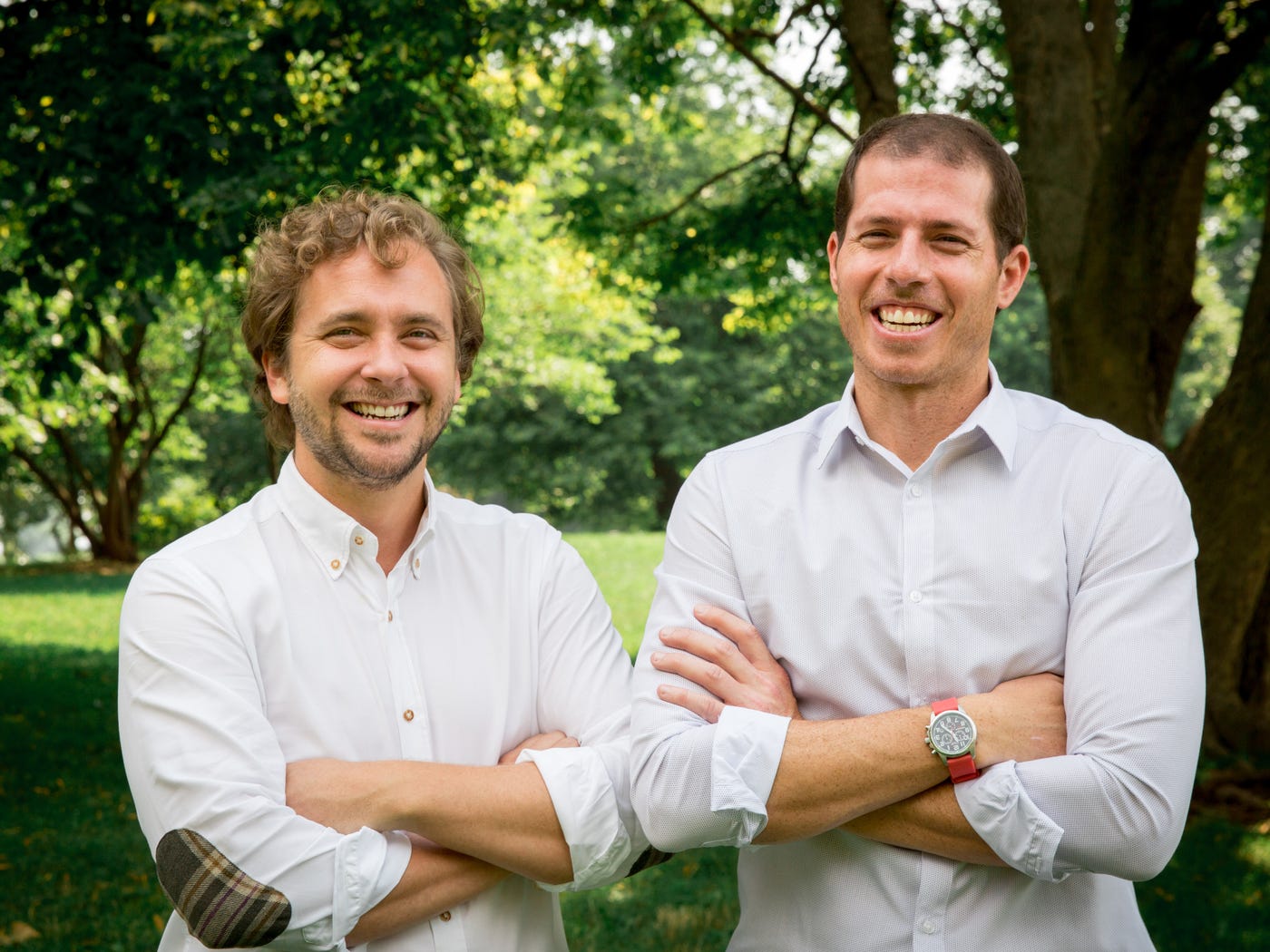 Five years ago, a new startup pinned its future on the landmark healthcare law, the Affordable Care Act.

Millions of people were gaining health insurance through the law, which is often called Obamacare. Doug Morse-Schindler and Justin Holland, cofounders of HealthJoy, were sure that that those people would need help navigating their new plans, which often required patients to pay thousands of dollars for procedures and prescriptions.

HealthJoy is a digital platform for users’ healthcare needs, from the specifics of their health plan to finding an in-network hospital, comparing drug prices and doing virtual doctor consults. Other similar products were out there, but “I just thought that they frankly were missing the mark,” Morse-Schindler told Business Insider.

He and Holland had just sold a software analytics company they’d founded to AVG Technologies for roughly $5.6 million, and decided to take a similarly tech-enabled approach for the new company, HealthJoy. It quickly won over customers and investors alike, with over 60,000 people signing up by 2016 and around $6 million raised in its seed and Series A rounds.

Why HealthJoy shifted away from Obamacare

But then the tables suddenly turned. Health insurers had been losing money in the new market for years, and began to pull out — leaving HealthJoy on unstable ground.

So HealthJoy did what startups do: it pivoted, focusing instead on selling its software to employers that provide insurance to their workers.

The startup is now worth $40 million, according to PitchBook, after raising $12.5 million last month from investors like US Venture Partners and EPIC Ventures.

HealthJoy’s story, as told through two early pitch decks shared with Business Insider, speaks to how companies are navigating an ever-shifting, often turbulent US health market.

Health startups like HealthJoy are being drawn to the much more stable market for employer-provided health insurance, which at more than 150 million people dwarfs the individual market’s roughly 15 million.

And employers want these tools. That need reflects “the complexity of the health system today and the complexity of how pricing and payment flows through the system,” Brian Marcotte, president and CEO of the National Business Group on Health, a nonprofit that represents large employers on issues of health policy and cost, told Business Insider.

HealthJoy now takes on the same healthcare navigation role as before, but in the employer-paid insurance market. It has signed up 300 employers across the country, and has 200,000 members total, including workers and their families.

“The way we think about it is: Employees should have the same options for transparent pricing that someone has on consumer side,” Holland, HealthJoy’s CEO, said. “But as an employee, you can’t really see that. You don’t have information about what you’ll pay before you go to the pharmacy.”

Programs that can “simplify the process while taking this complexity and sticking it behind a wall” will be essential, NBGH’s Marcotte said, but they’ll also need to use big data, personalized information and concierge or navigation services to better serve employees’ health needs.

See how HealthJoy pitched itself to investors

In a competitive and increasingly crowded field, with big names like Accolade, Quantum Health and Grand Rounds, actually being able to deliver on that technological potential is crucial.

“Whoever gets that first and is able to provide that will be able to differentiate themselves,” Marcotte said. Companies in this space may start as tools to advocate on patients’ behalf, or as digital platforms, for example — all “different starting points, but they all seem to be racing towards the same finish line.”

Read on to see how HealthJoy first sold its business to investors, and how that’s changed over time. 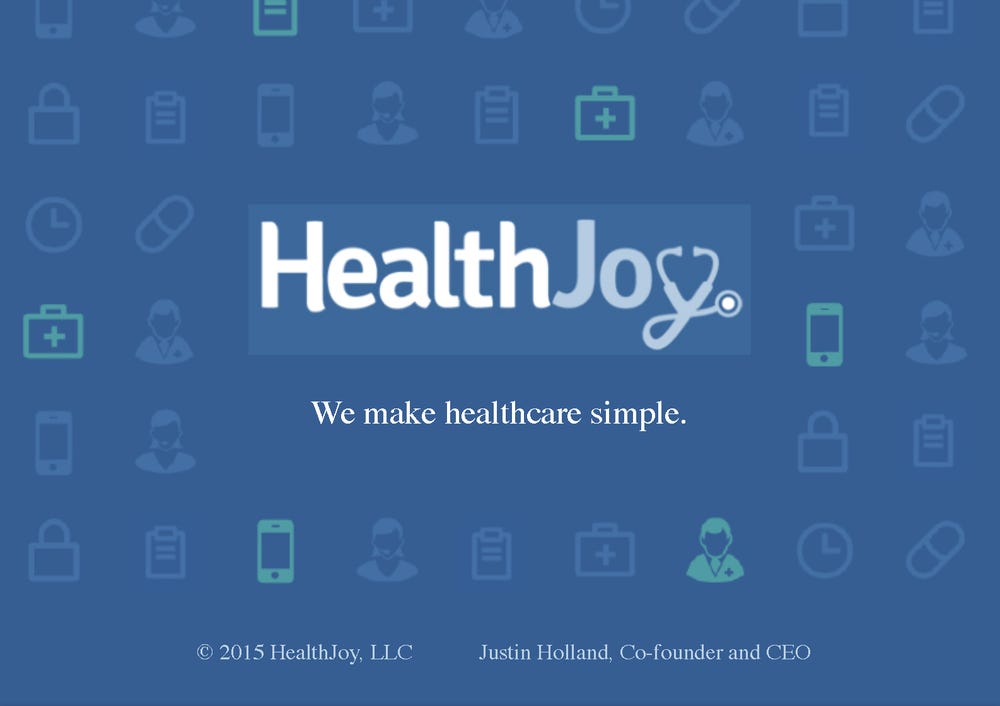 The startup used this slide deck through roughly the second or third quarters of 2015. 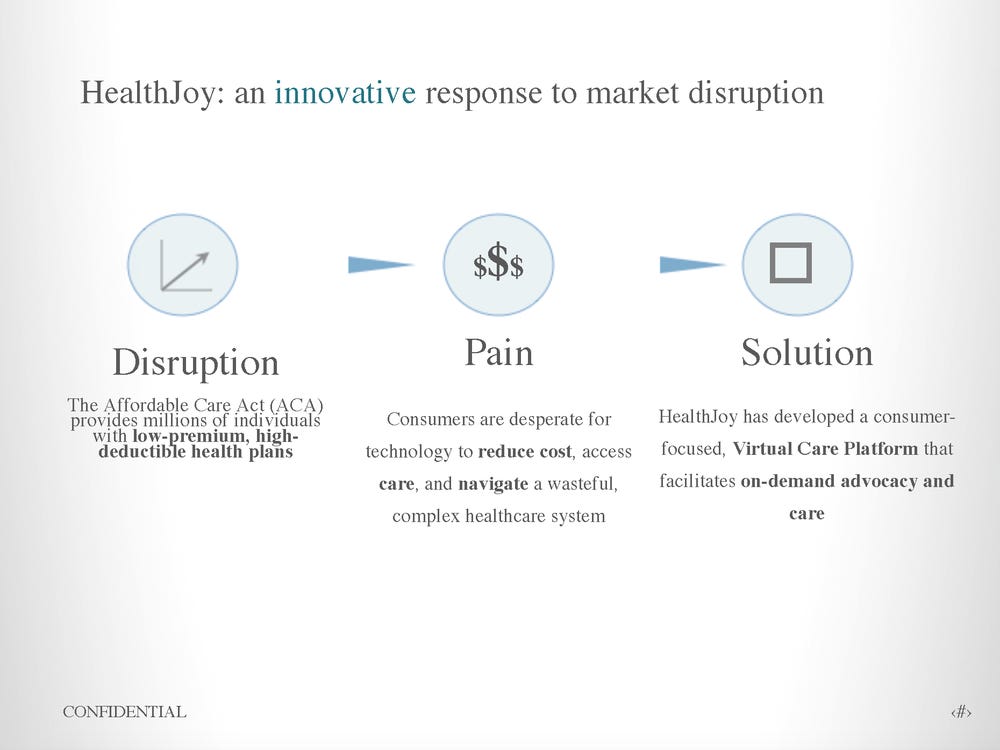 HealthJoy was initially focused on the individual health insurance market, selling to people who were getting their coverage through the Affordable Care Act.

This slide shows how the startup described itself as a stabilizing force for consumers trying to find their way around an opaque market. 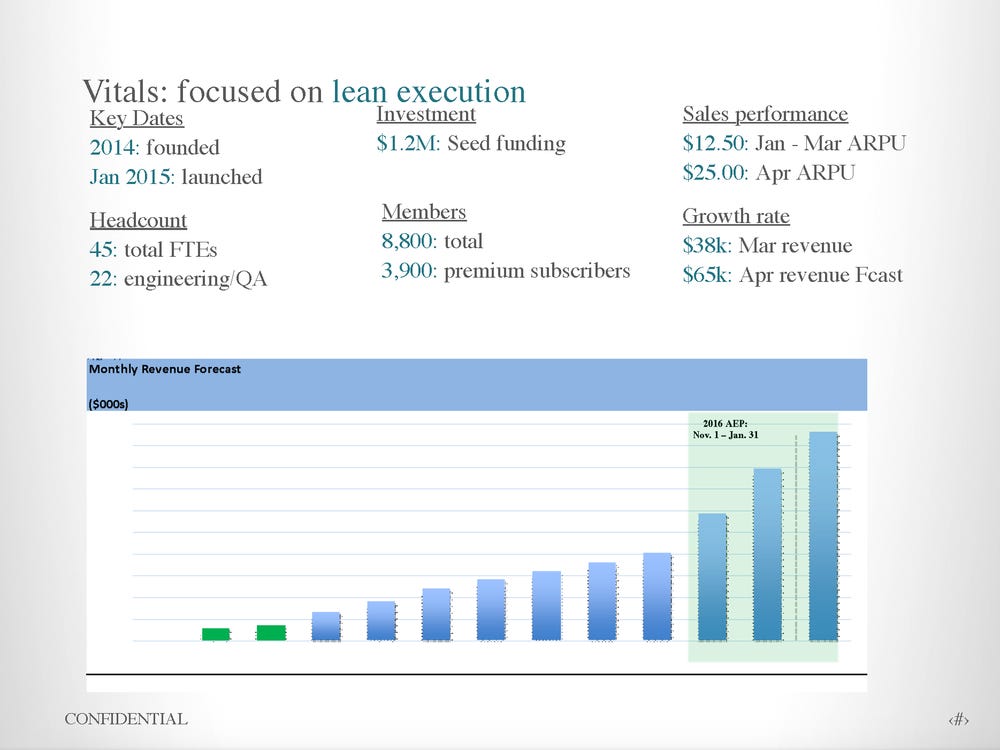 During this early period, HealthJoy raised about $6 million total. 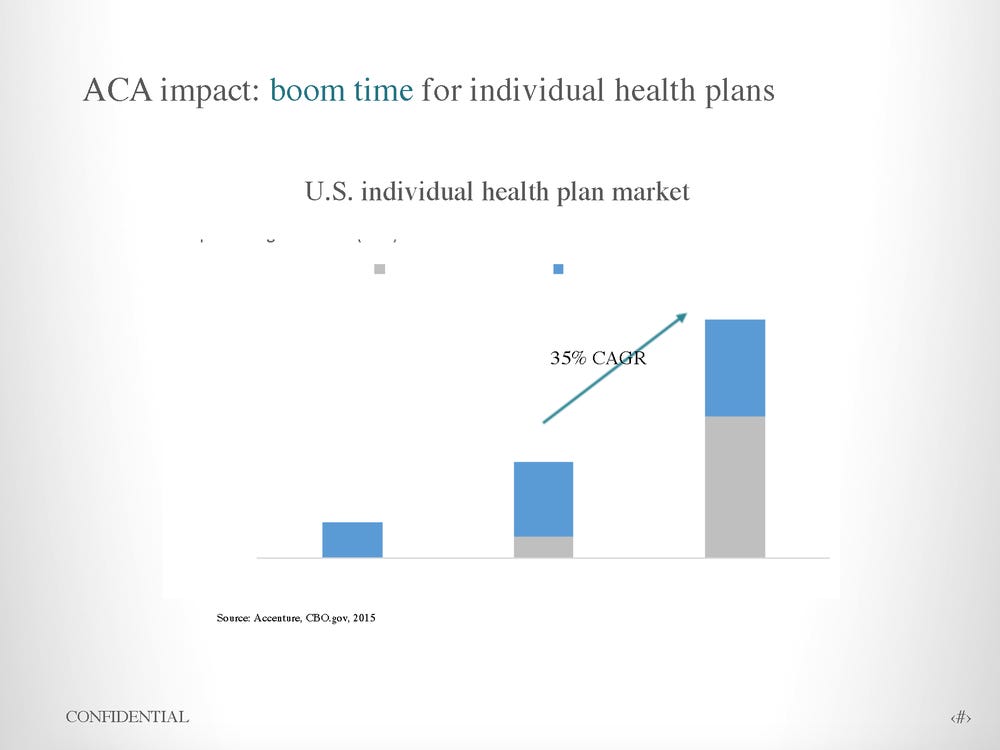 HealthJoy began by emphasizing the promise and business potential of the new market.

The company had just been through its first selling season, signing up around 9,000 new members. "Spirits are high, we're growing," HealthJoy President Morse-Schindler recalls. "Things are good." 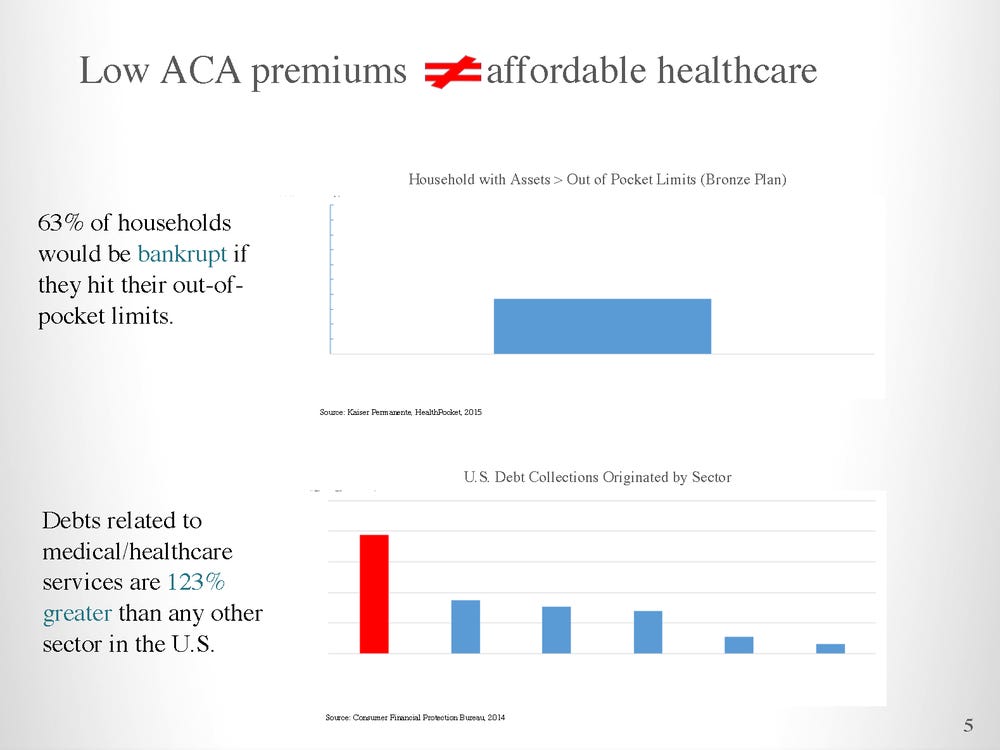 Large deductibles and narrow networks of doctors are hallmarks of ACA plans, because they are a way of keeping costs down. 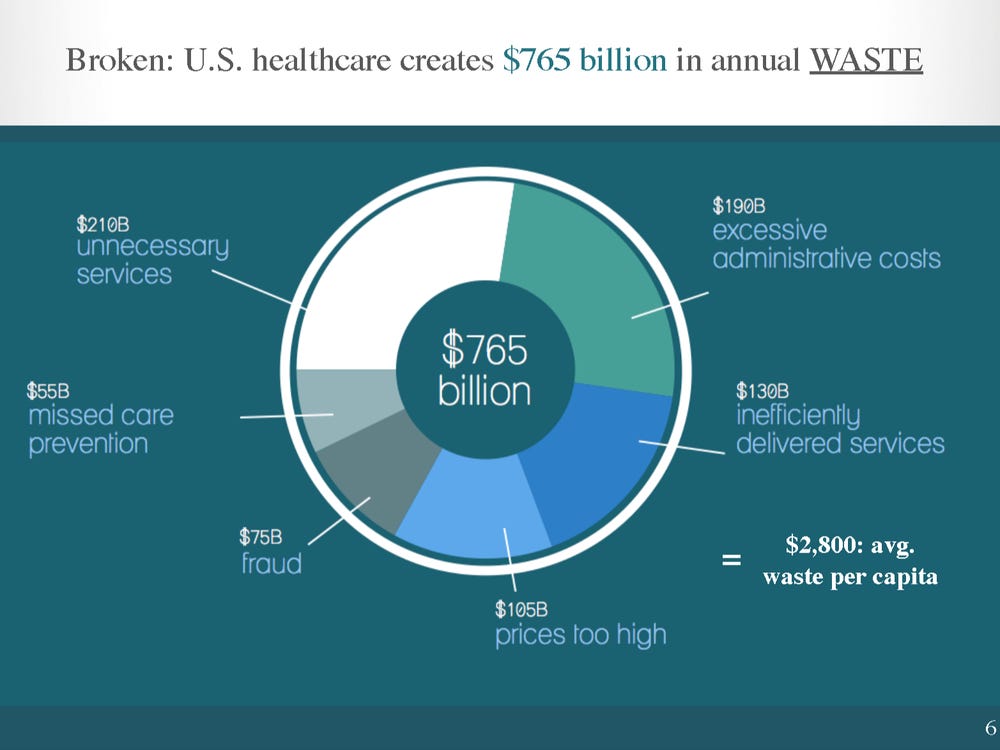 HealthJoy also pointed to wider problems of waste and inefficiency in the US healthcare system. 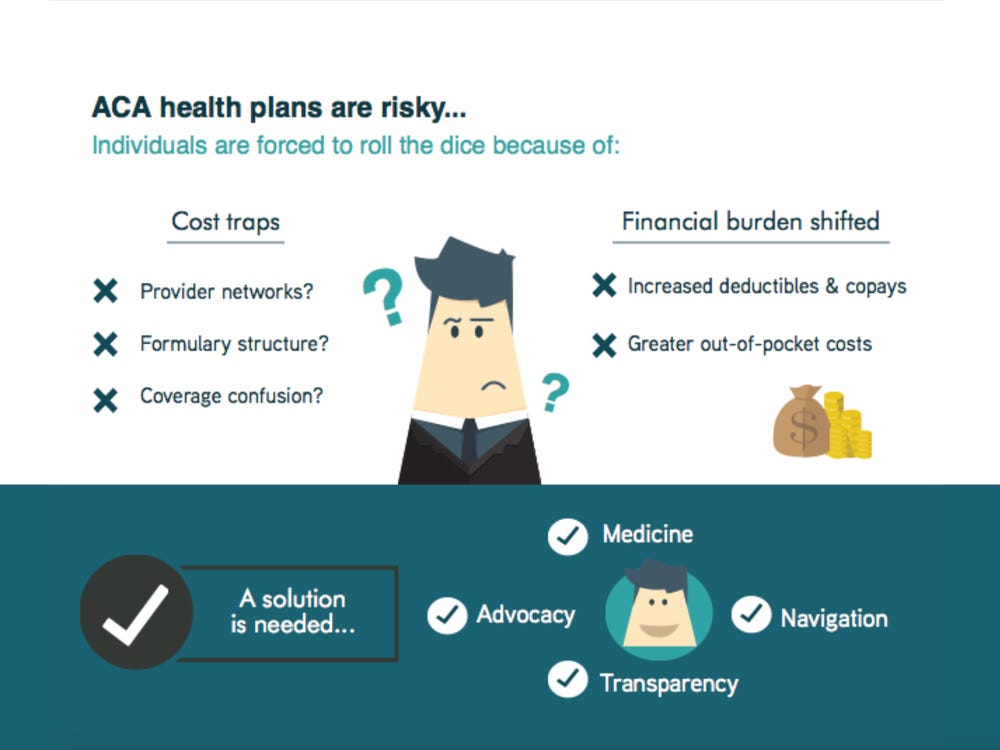 HealthJoy pitched its offering as a solution for individuals trying to make sense of opaque health plans.

HealthJoy told potential investors that many new members covered by the Affordable Care Act would have trouble understanding their plans — an opening for the company's business model. 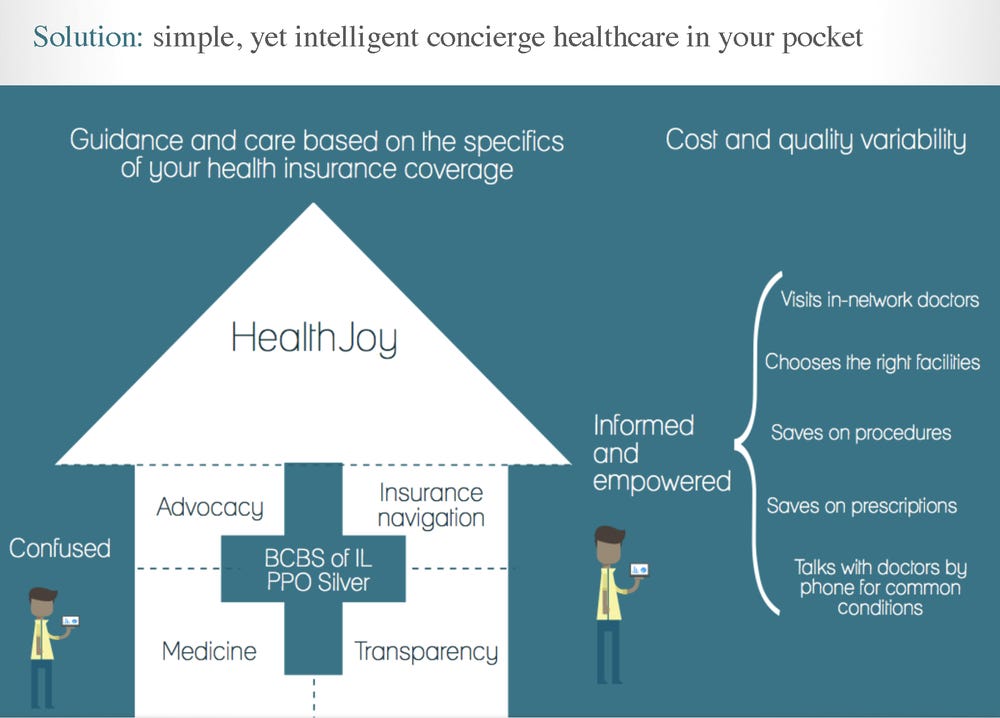 This slide shows how the company envisioned consumers using its offering, from saving money to finding doctors.

Saving users money is still a core part of what HealthJoy does, Morse-Schindler says, but in the employer-sponsored insurance market it's more focused on the employee's overall benefits package, from the medical plan to optimizing medications. Though the startup today contracts with employers not individuals, ultimately workers also benefit from lower costs, as they pay for healthcare both out of their wages as well as out of pocket, HealthJoy says. 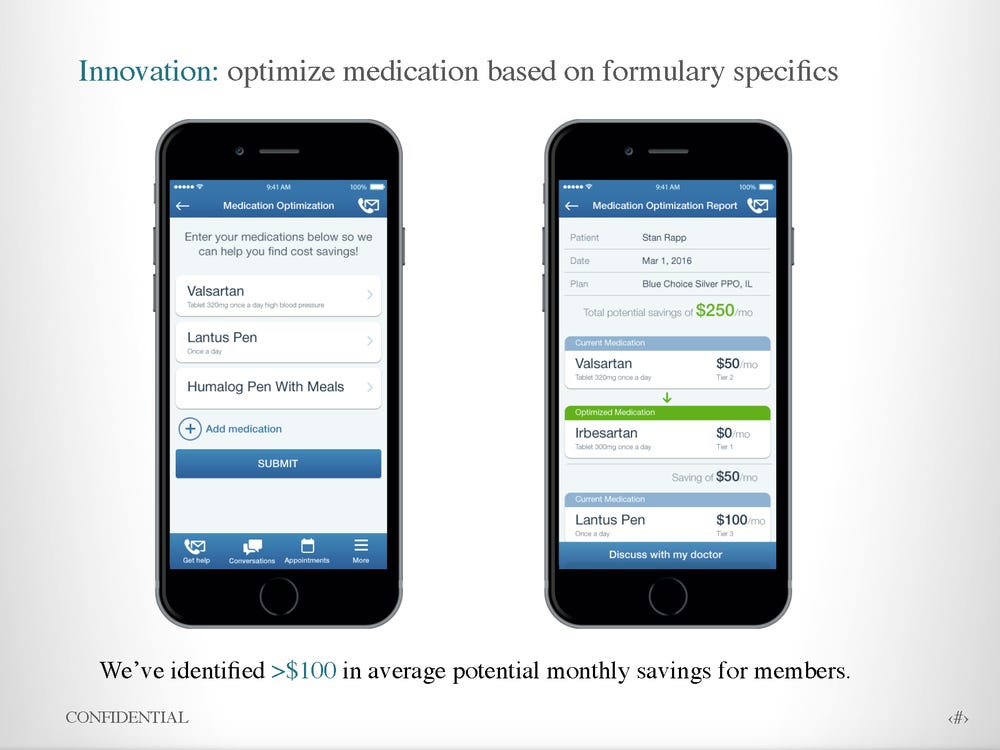 The platform today looks different, yet it's the same basic offering, Morse-Schindler says. 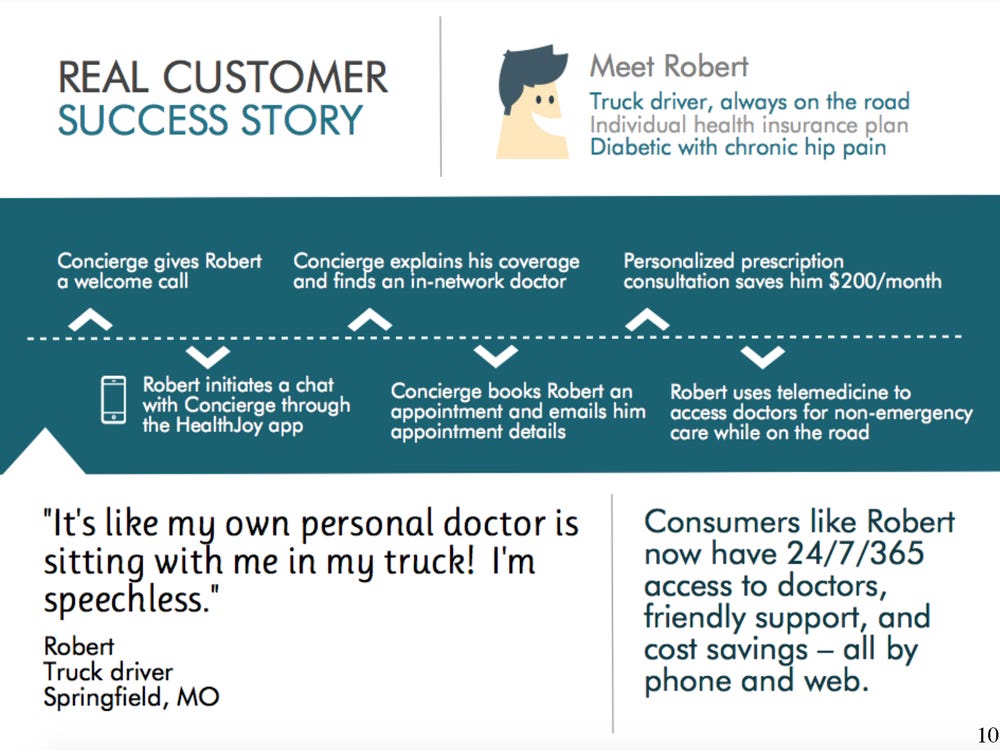 This slide details a success story from a customer that the company was sharing with investors.

The company no longer works with customers in this area, focusing wholly on the employer-sponsored group market. 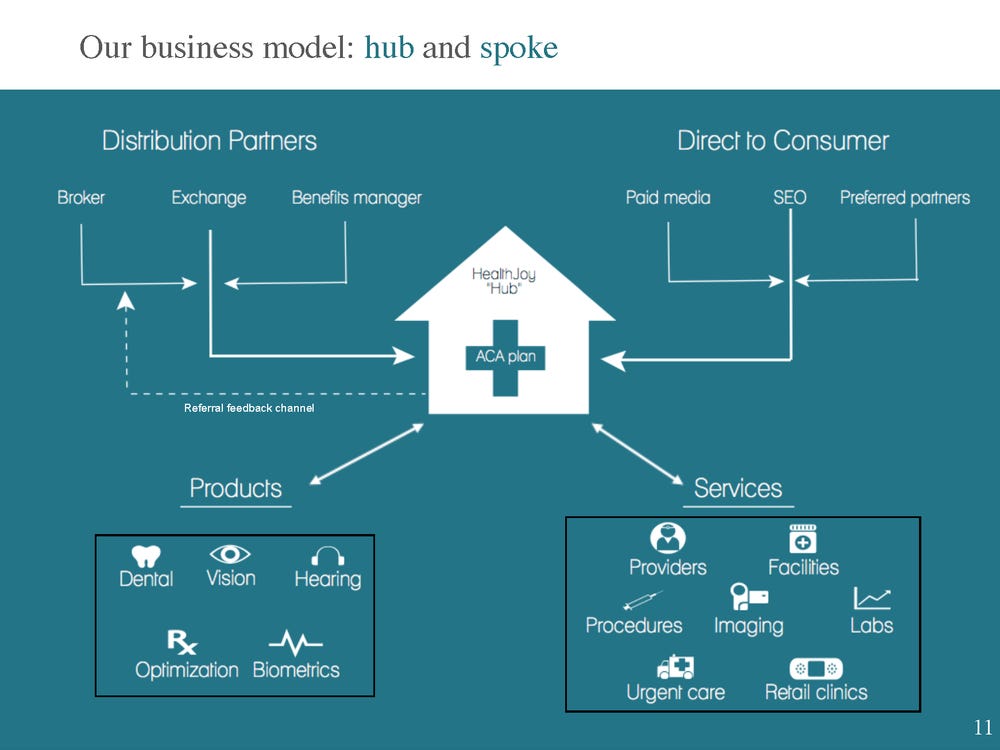 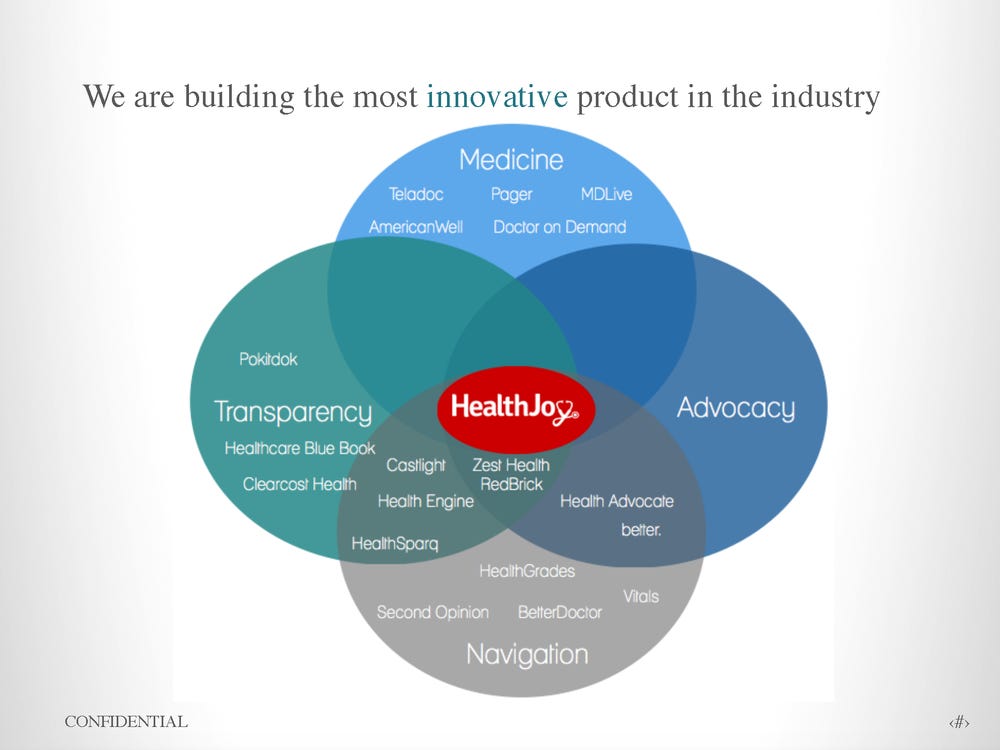 This slide from the early pitch deck compares HealthJoy with potential rivals. 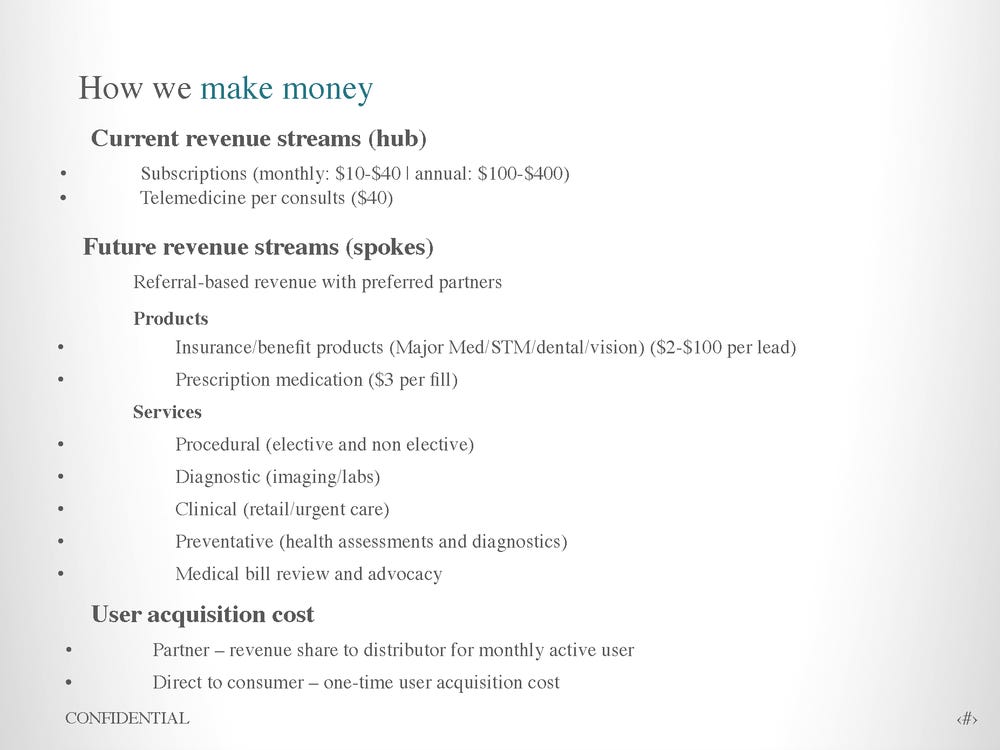 HealthJoy now charges employers a fee instead. The company declined to share details of how much it charges.

This slide deck breaks down how HealthJoy started off making money from subscriptions purchased by individual users, with the intention of also generating revenue by referring patients to "preferred partners." 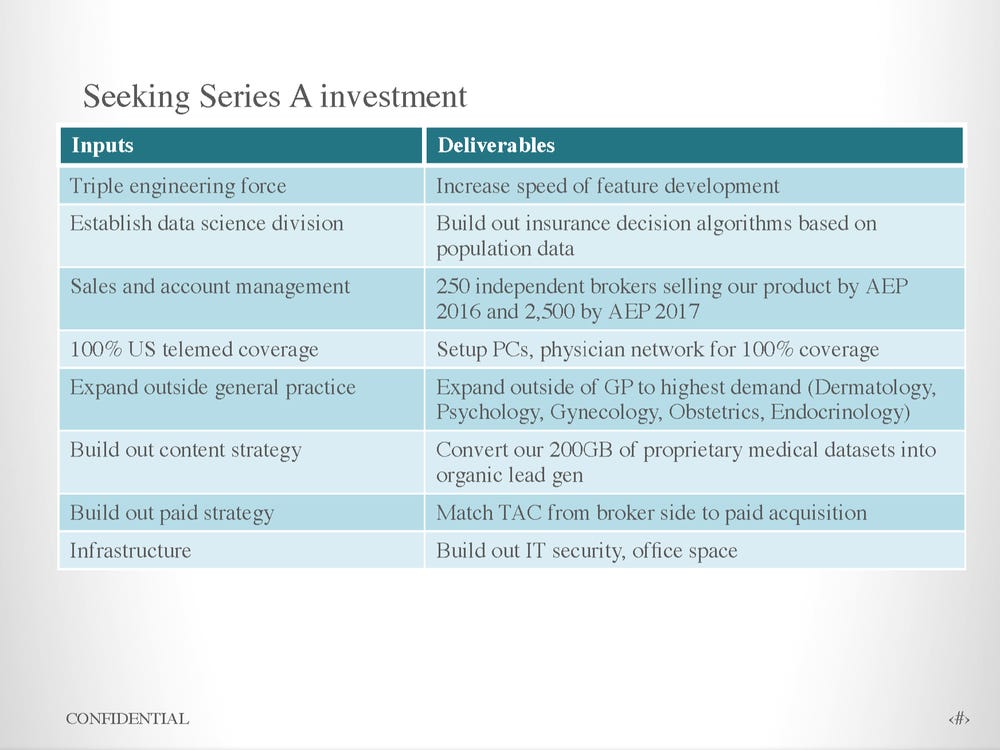 The company also outlined for investors where their funds would be put to work. 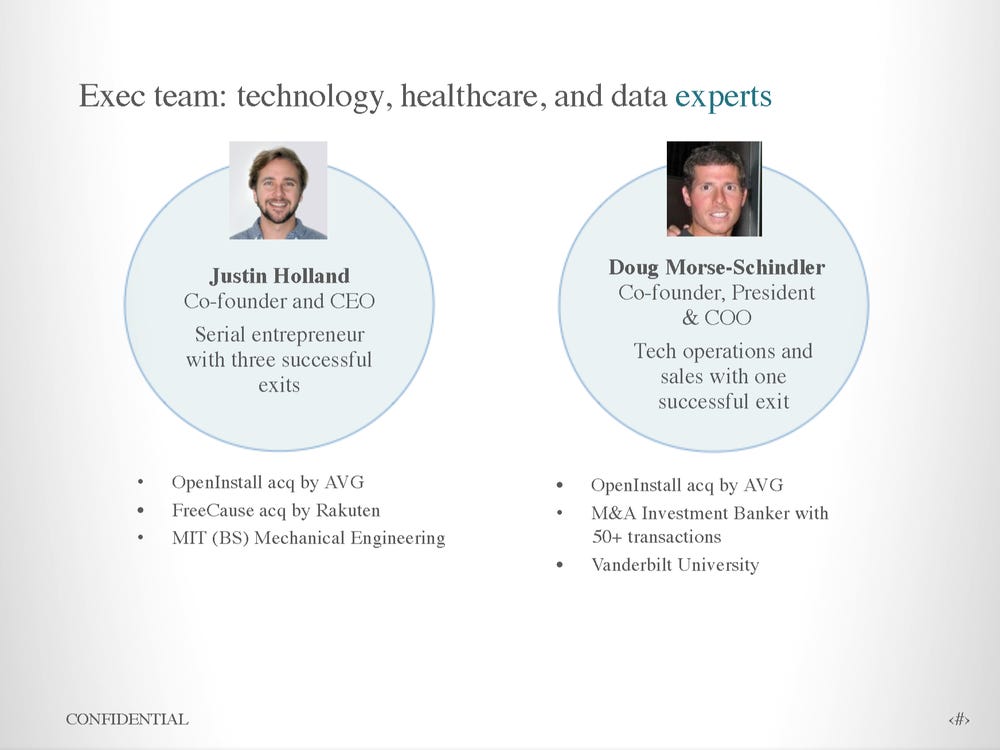 In the 2015 pitch deck's appendix, HealthJoy's founders also touted their expertise, including the 2012 acquisition of their prior company, OpenInstall. 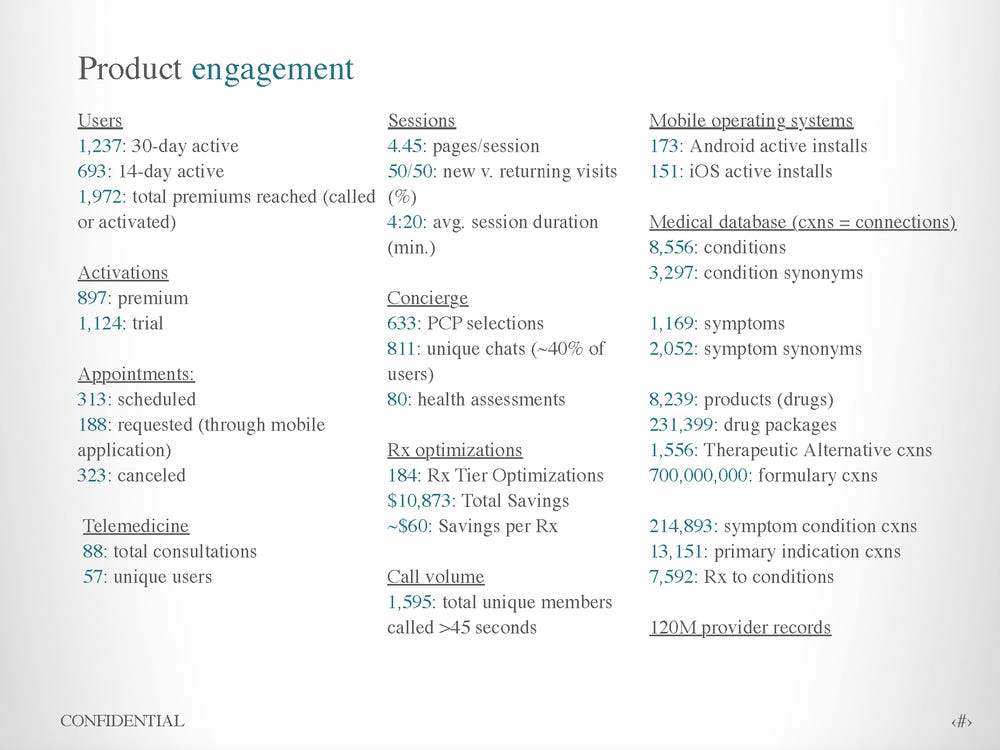 Digital health companies often struggle to get people to use their tools. "Engagement is the number one issue that keeps employers up at night," the NBGH's Marcotte told Business Insider. 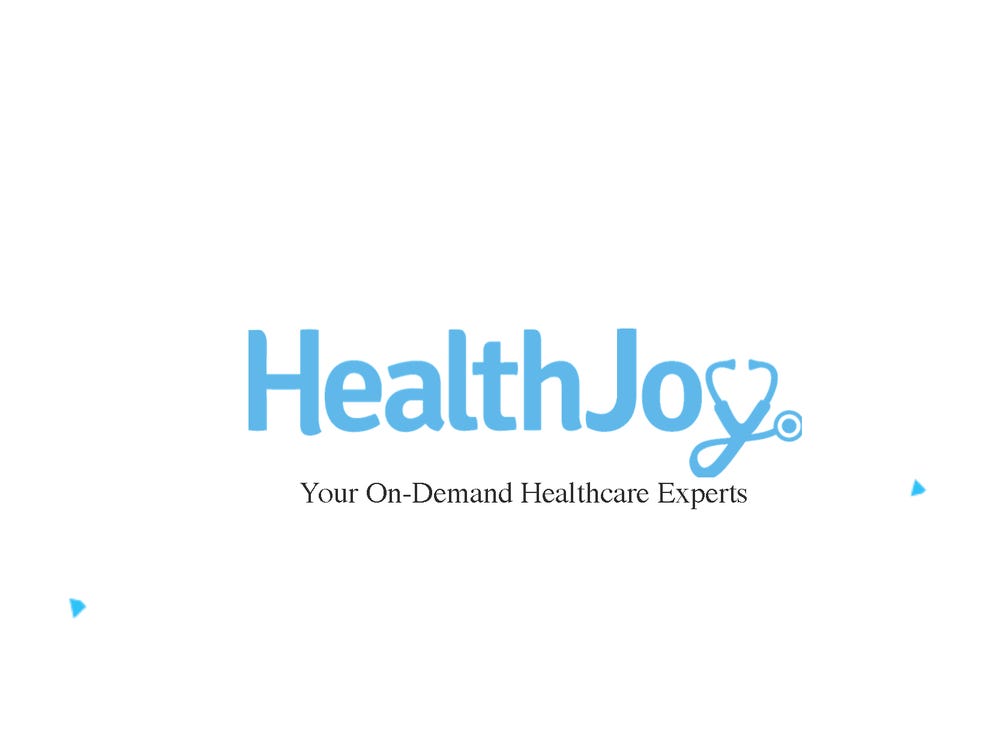 When HealthJoy shifted its strategy, this new pitch deck, from April of 2016, detailed the change. 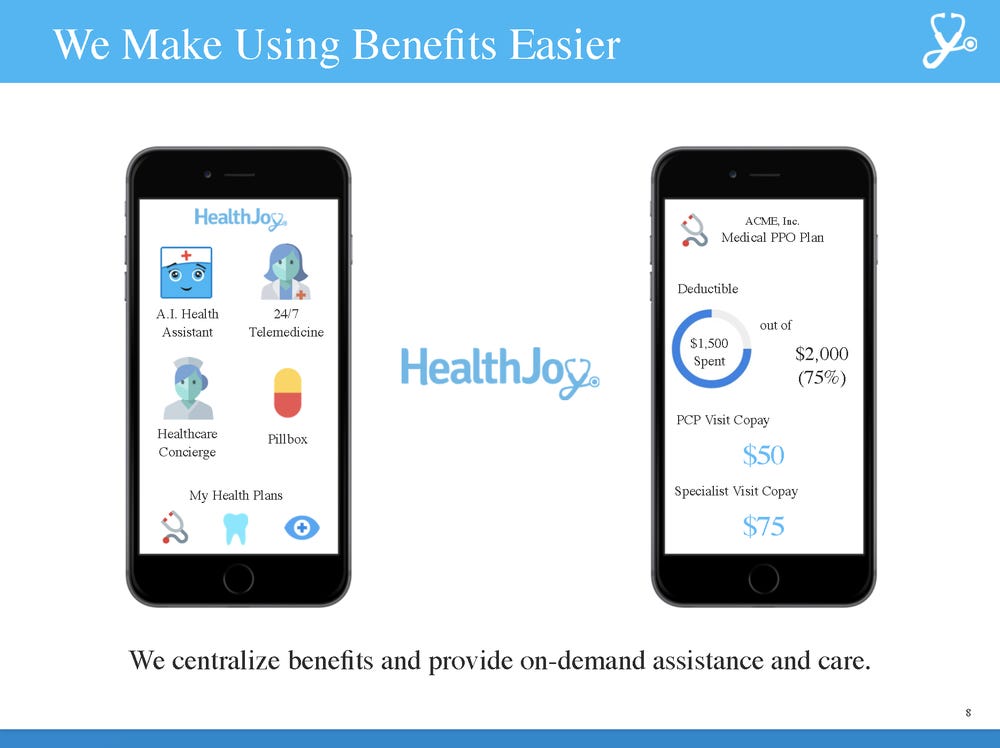 HealthJoy is centered on helping to close a very real knowledge gap in healthcare.

"People don't know what they're enrolled in, they don't know what their medical plan is. They don't necessarily know how to make good decisions. It's just a very fragmented experience," Morse-Schindler told Business Insider. The company aims to change that with its platform, which employs an artificial intelligence-enabled virtual assistant, "JOY," as a guide. 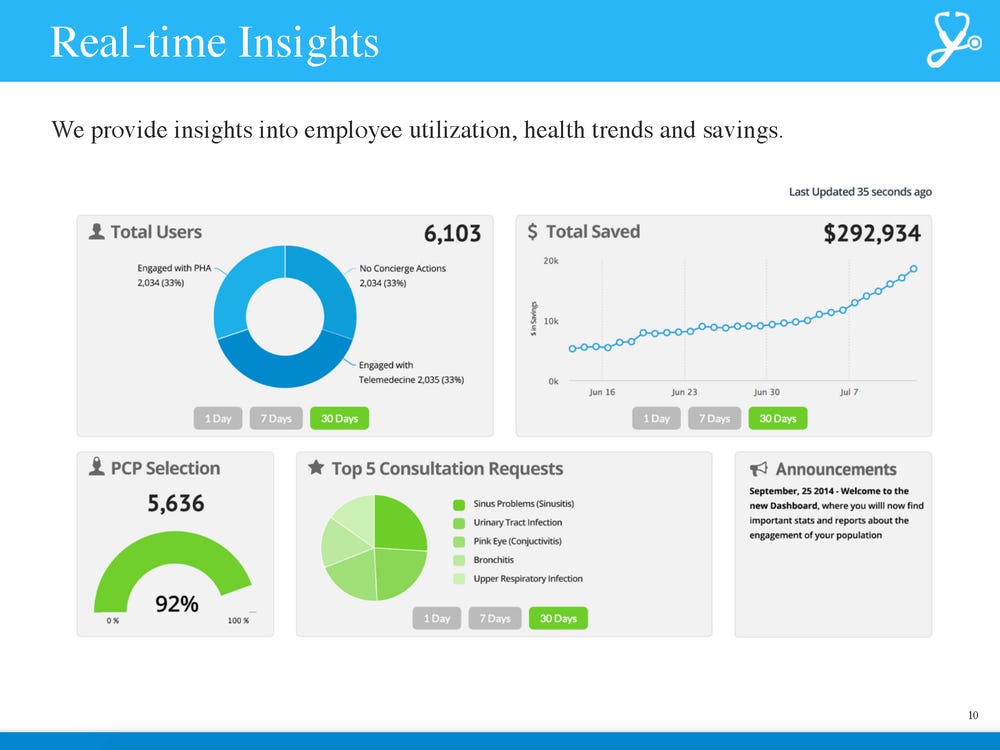 Employers, in return, get a birds-eye perspective on their healthcare spending.