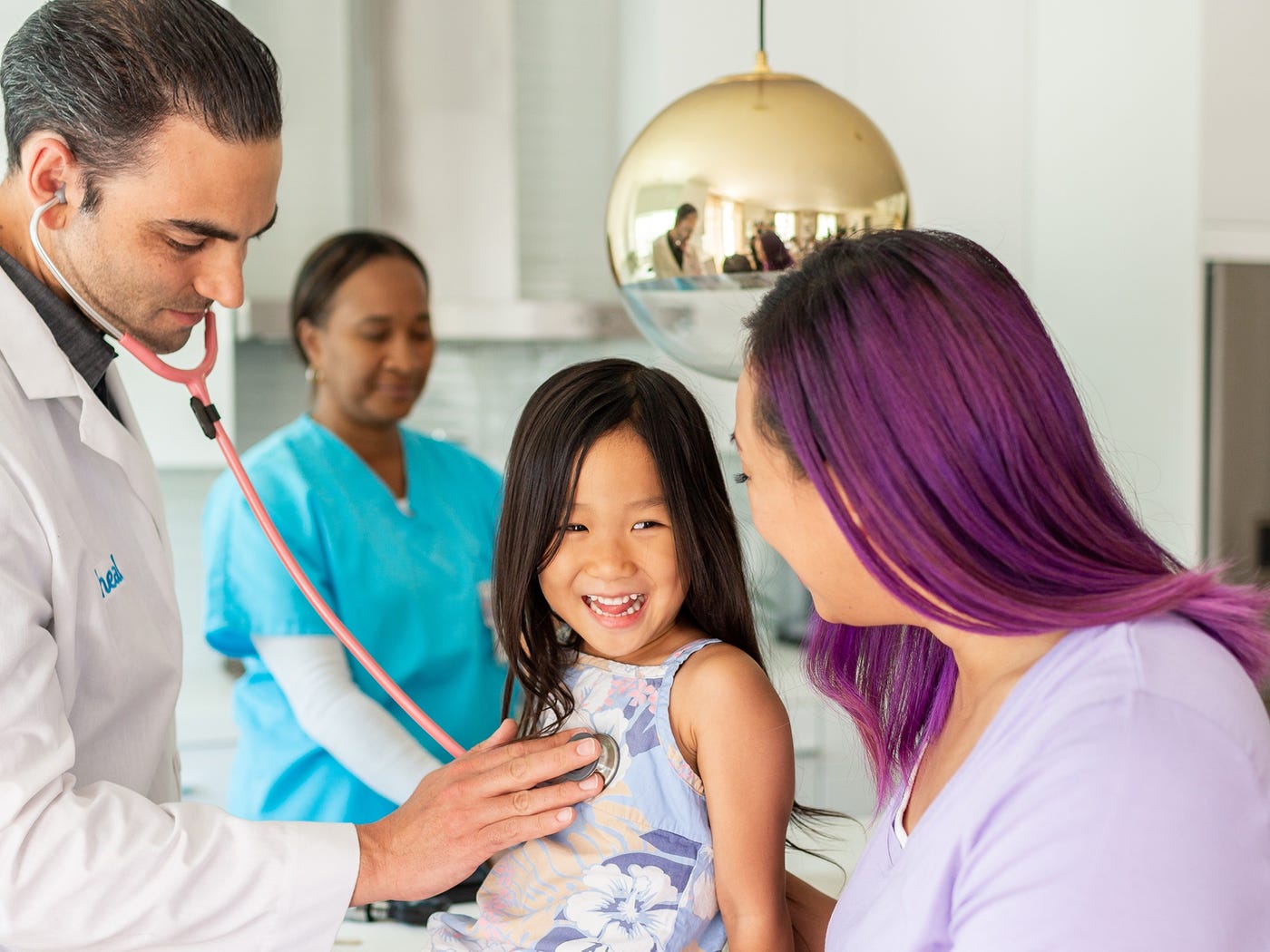 Back in December, Nick Desai was flying from his home in Santa Monica out east, hoping to secure funding for his telehealth startup, Heal.

Humana, the healthcare behemoth, had Desai out to Louisville, Kentucky, to pitch the team. What he didn’t know was that Humana had invited several startups out in something of a pitch competition, where the winner would walk away with $100 million in funding. More importantly, the winner would be Humana’s partner in its expansion plans for home-based healthcare.

“It was a bake off to see which company they should pick as the foundation of their home strategy,” Desai told Business Insider. “They had a vision that was very close to our reality. It was an instant meeting of the minds.”

After pitching 12 to 15 people that day, Desai said that the deal was set in motion. By January, a group of more than a dozen Humana employees came out to Santa Monica for another round of interviews and meetings as part of what Desai called an exhaustive due diligence process.

It paid off: On July 29, Heal announced that it had raised $100 million in strategic funding from Humana and the partnership was official. The deal valued Heal at $300 million.

“I went out there in February for one more critical meeting, but that was the last work-related travel I took,” said Desai, who is Heal’s cofounder and CEO. “It was the second week of February and we were following the developments with the coronavirus, and my wife told me ‘okay, no more planes.’ Had we not been able to do those meetings, the deal would’ve taken a lot longer.”

Heal provides doctor house calls and virtual visits to its growing network of patients, Desai said. The former engineer explained that the company combines automated tech services with tools like a mobile app to cut inefficiencies, and therefore costs, from primary healthcare.

Now, the five-year-old startup is using its latest funding to expand its doctor house call and virtual appointment services to new markets such as Chicago, Houston, and Charlotte just as demand skyrockets. The new markets are part of Heal’s growth plan, Desai said, but were helped along by Humana’s network and the recent funding.

Desai said that, although the funding deal was well under way prior to the pandemic, the growth from patients wary of doctors’ offices has shown that the deal was a fortuitous one, and that Heal’s model is here to stay.

Even so, partnering with an entrenched company like Humana could have drawbacks. Many startups of Heal’s age and size opt out of working with corporate investors for fear that the team and its hard work will be swallowed by corporate bureaucracy, an outcome that outweighs the benefits those companies could provide. But Desai was adamant that working with Humana as a strategic investor was the right decision, at the right time, as Heal continues to grow.

“If we got another venture investor, we would have to go out and get more customers,” Desai said. “That’s the thing, Humana is going to become a customer of ours and their revenue and investment are enough for us to build on.” 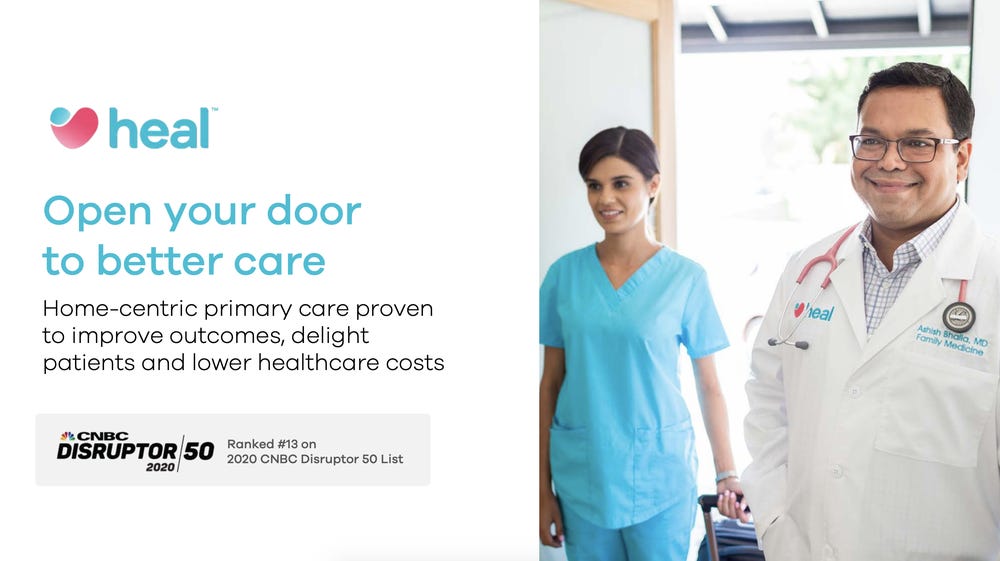 Heal was started in 2014 by husband-and-wife team Nick Desai and Renee Dua. 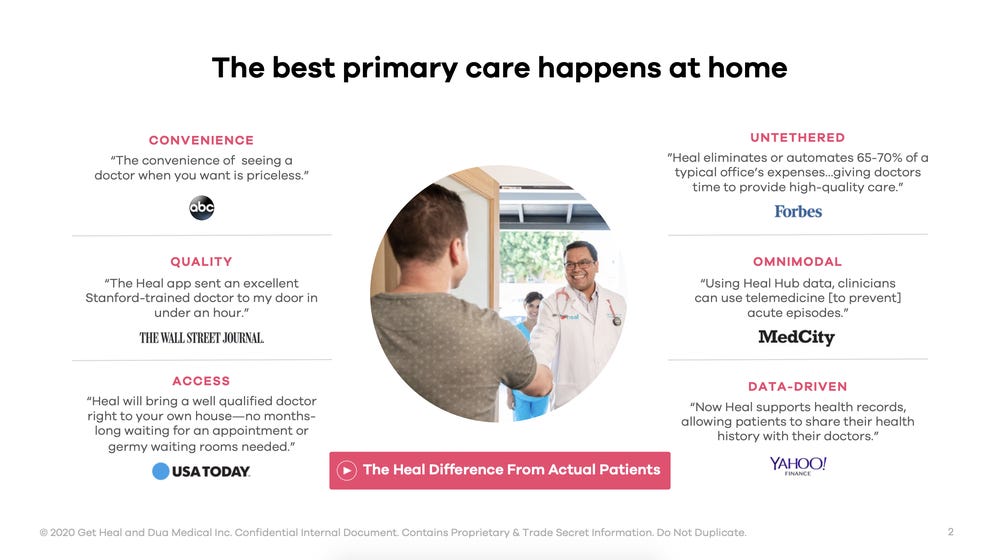 Desai and Dua started the company with the premise that at-home healthcare had better outcomes than traditional doctors' visits. 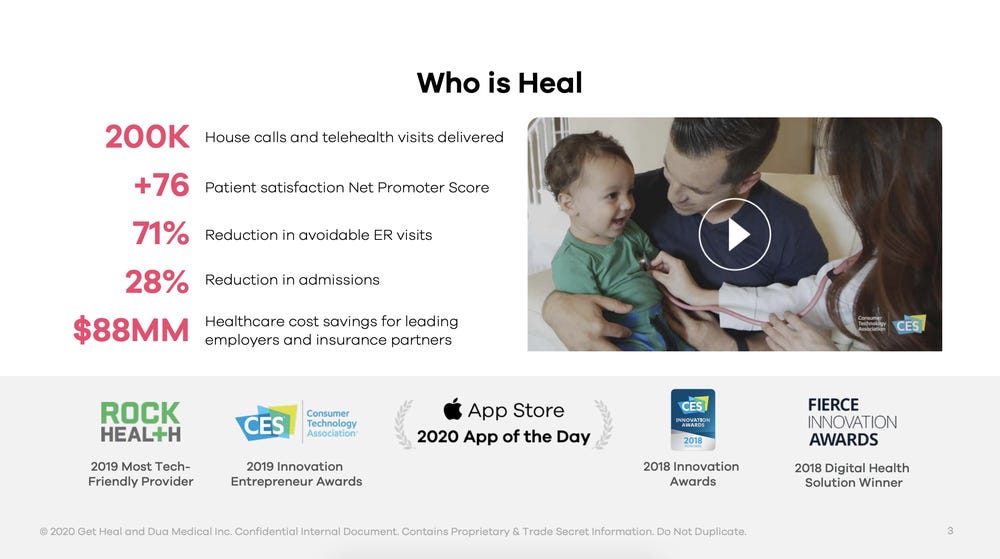 The startup offers at-home visits and virtual visits to its members as the solution to more traditional in-office appointments. 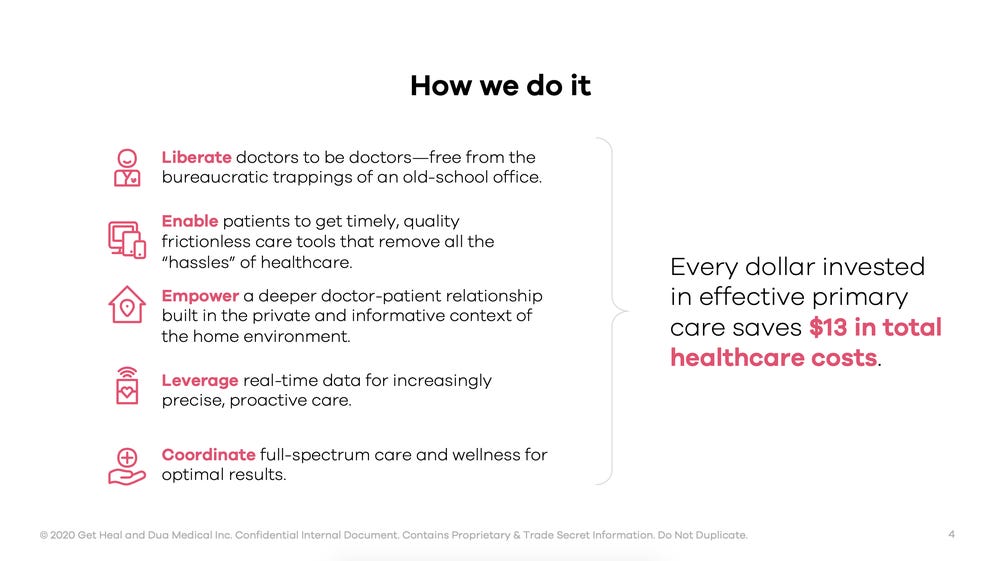 In its pitch, Heal sold investors on the value it could bring to both patients and care providers. 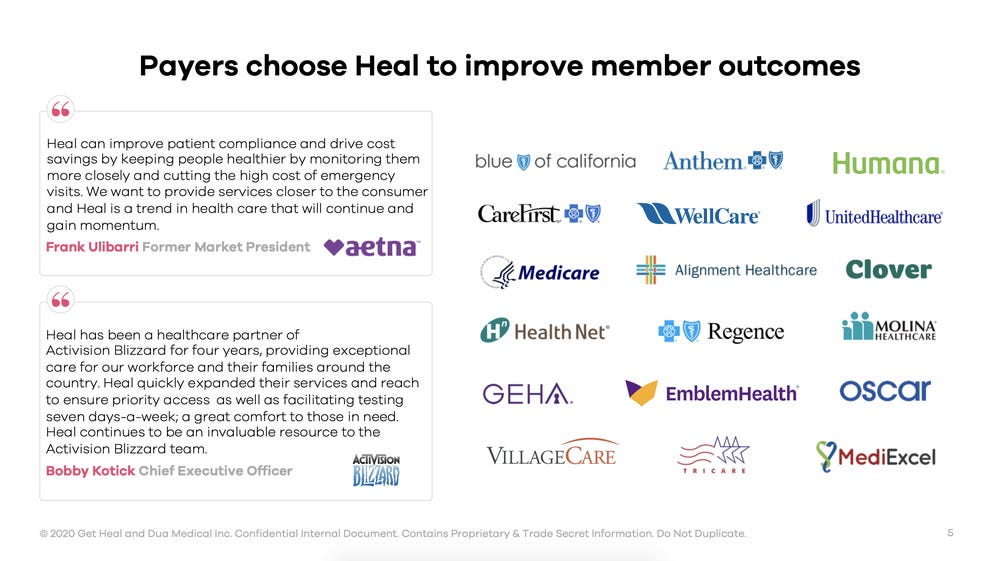 It also cuts insurance companies' costs by providing high-quality preventive care, according to its pitch. 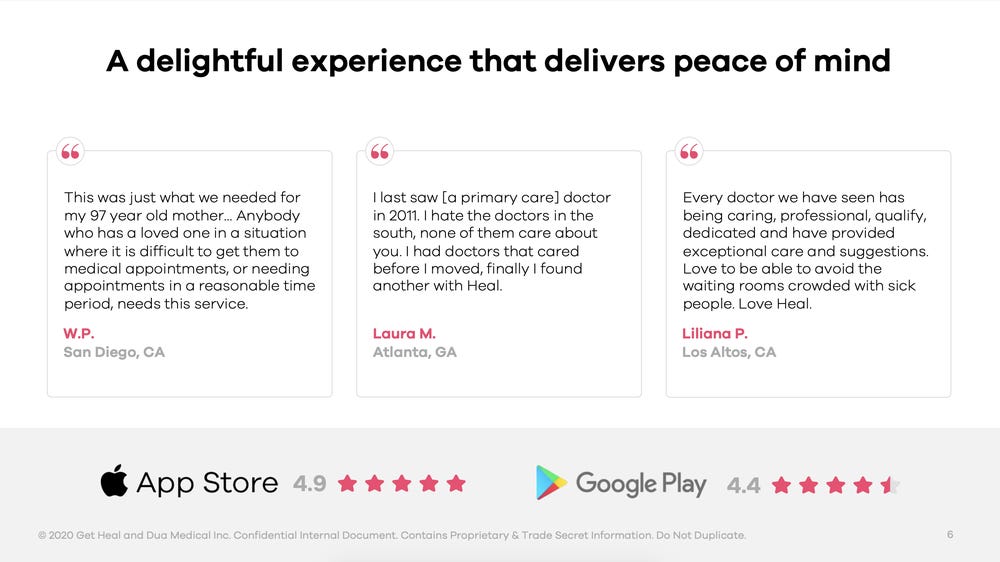 The company said it has facilitated nearly 200,000 house calls for patients across 7 states and Washington, D.C. 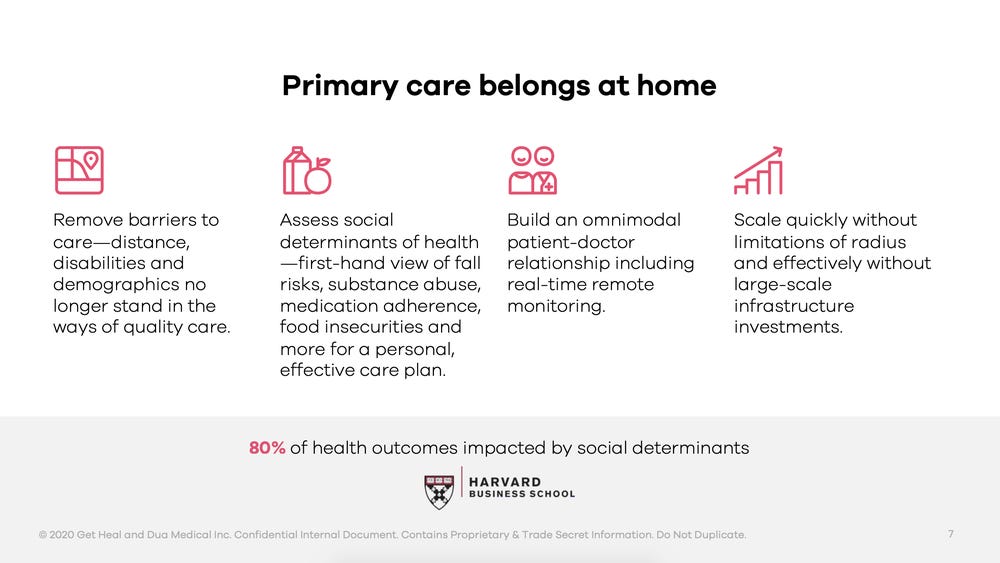 Desai told Business Insider that he thinks it's easier to convince patients to see a doctor in their own home instead of taking time off to go to an office. 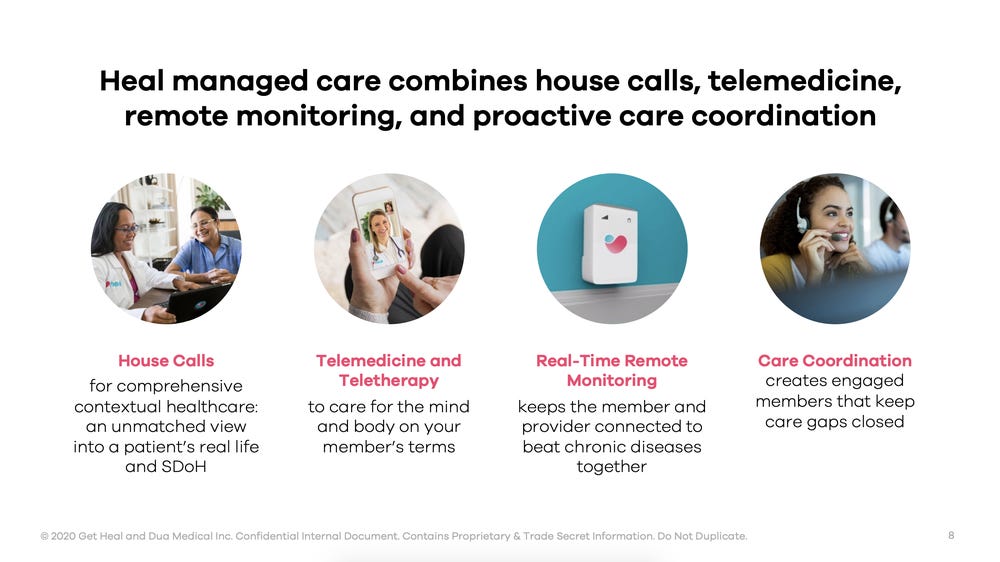 That's partly because doctors can see other elements of a patient's health, like diet and other lifestyle factors, that can influence their prognosis. 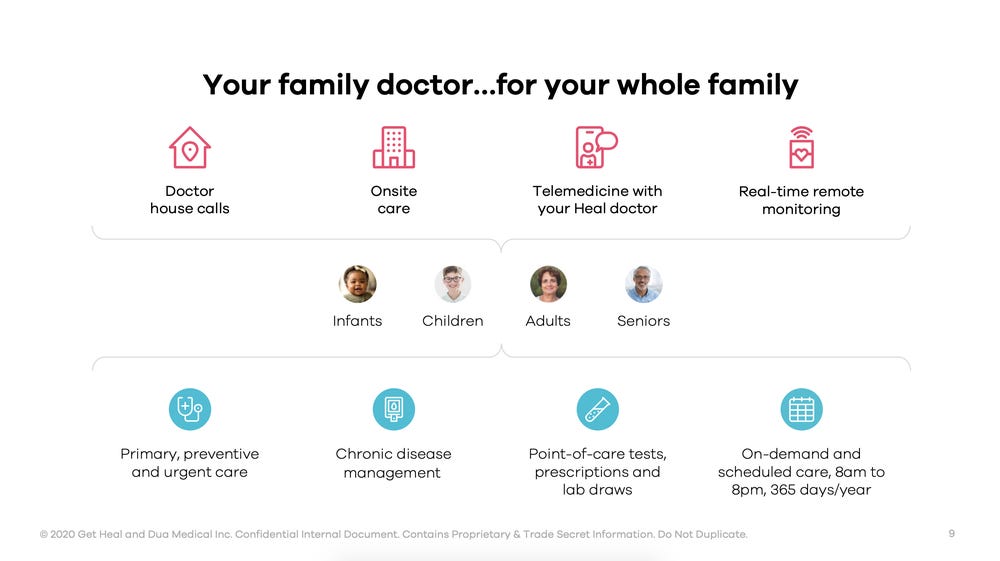 It can be difficult for patients to schedule and plan for multiple visits, another benefit to at-home or virtual visits, Desai said. 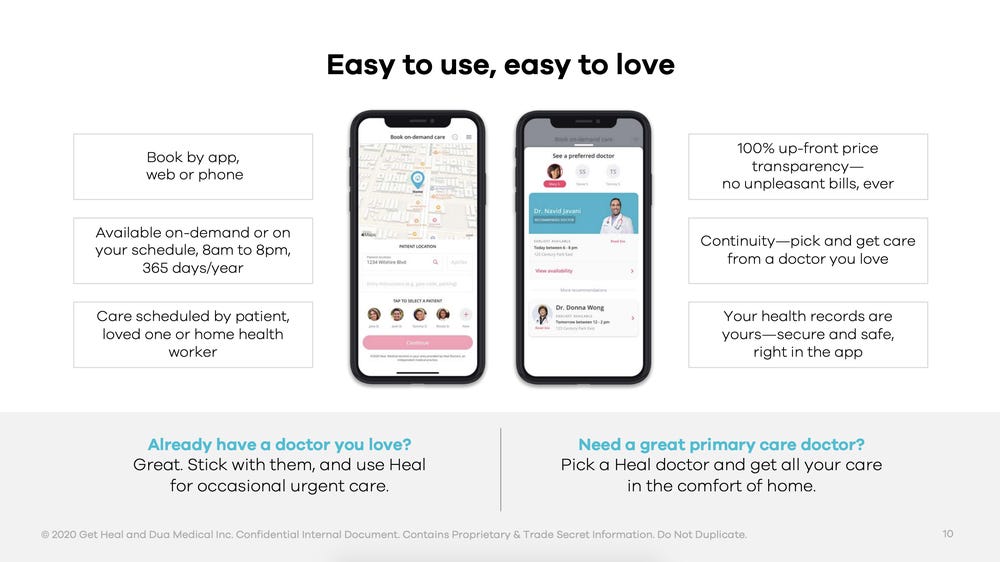 Patients are able to book an appointment with a Heal doctor on an app that also enables remote chats with providers. 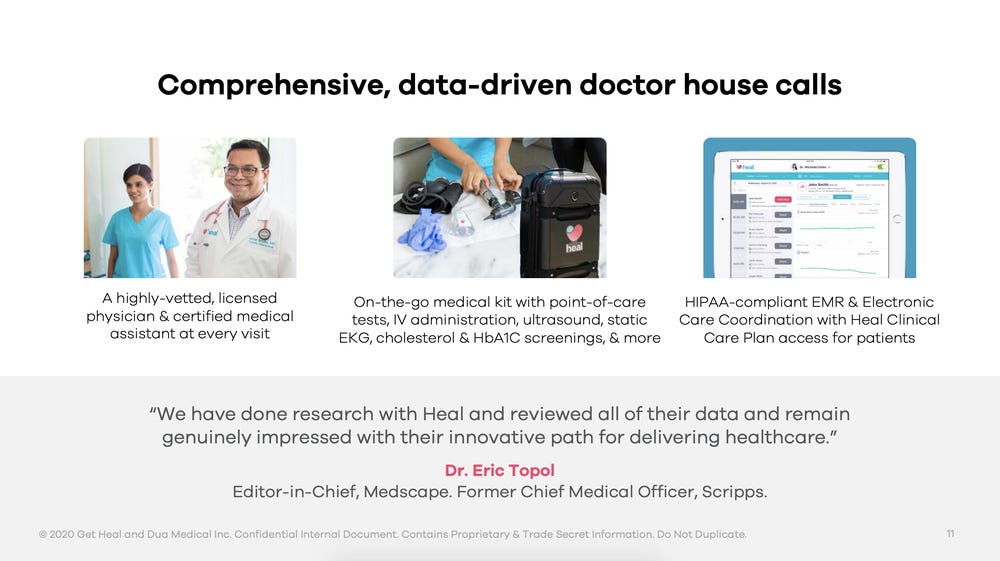 Desai, an engineer, said he saw an opportunity to automate parts of healthcare that were previously manual and time-consuming for patients, doctors, and insurers. 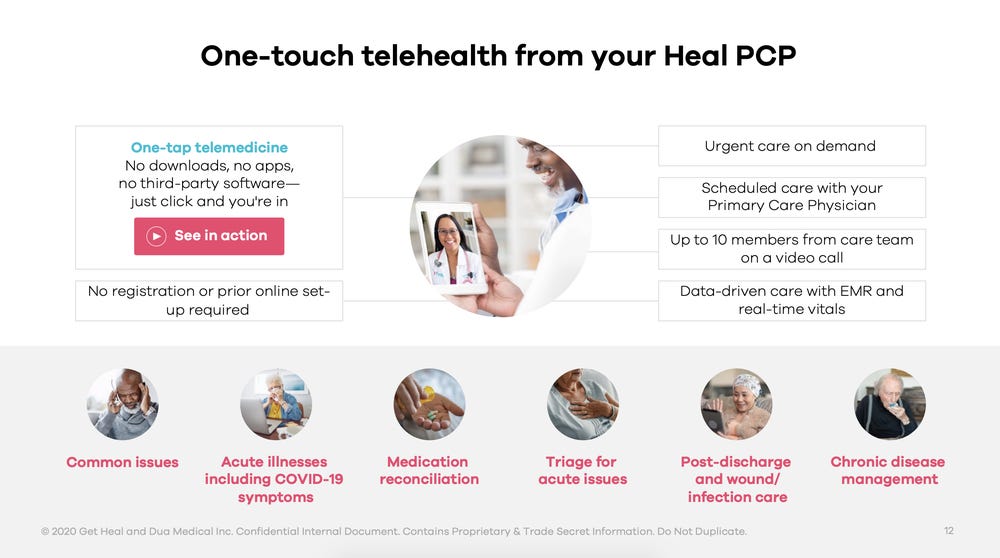 Desai claimed that Heal was able to lower healthcare costs by 65% compared to in-office care. 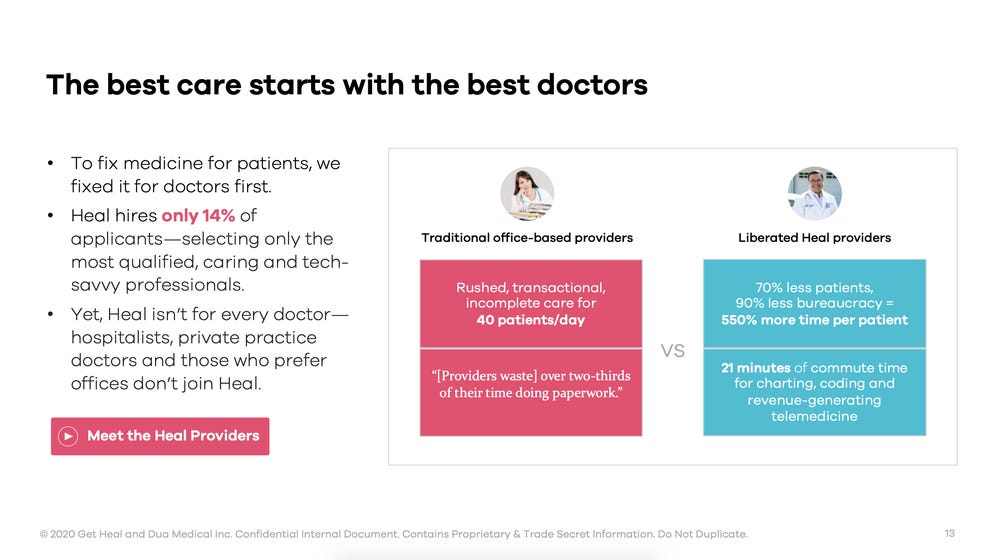 Desai also said that doctors in Heal's network are eager to get off the 'treadmill' of traditional office visits where they see as many patients as possible as quickly as possible. 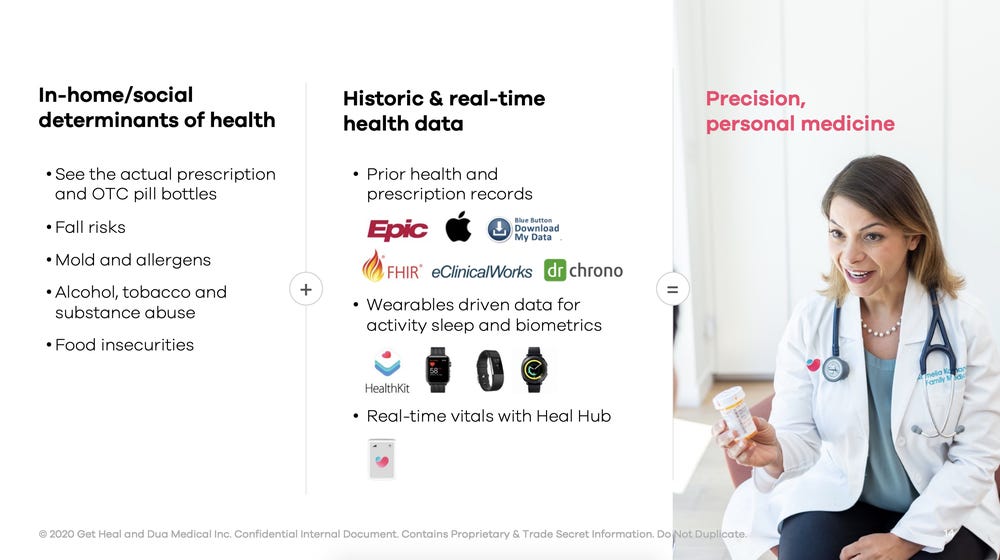 Heal doctors are able to spend more time with patients and get a better idea of risks or concerns patients have about their health, Desai said. 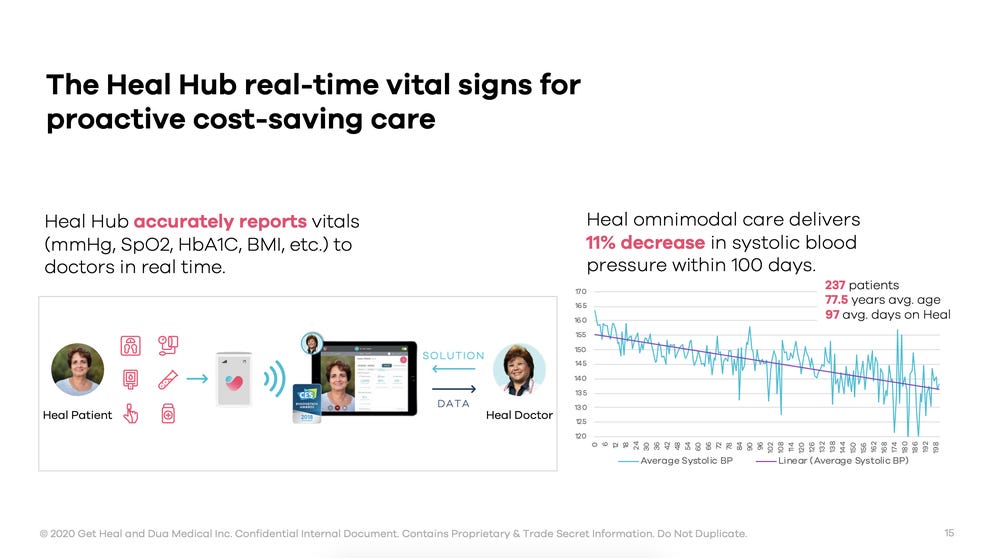 Heal also told investors that it can help reduce overall costs of healthcare, an especially large market in the United States. 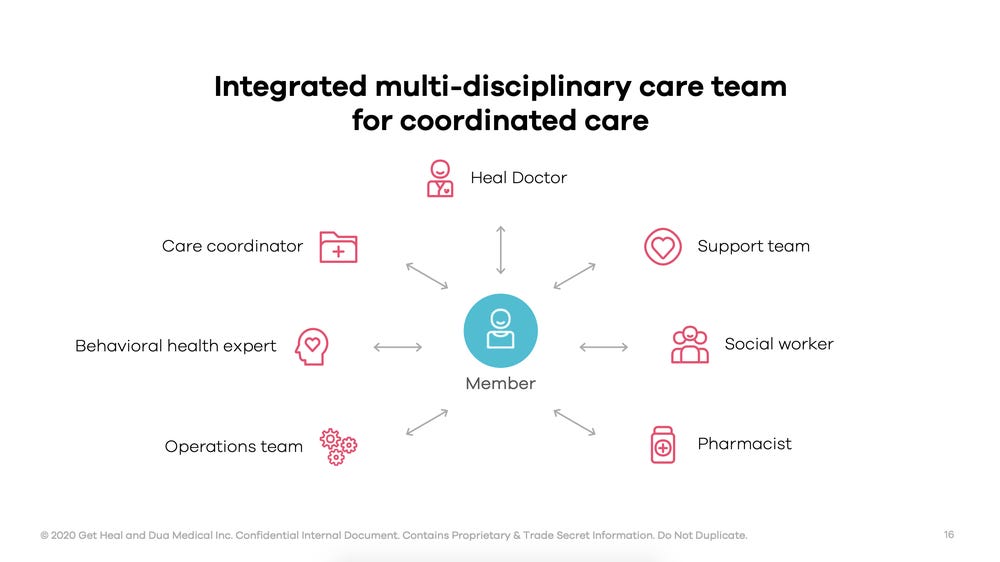 That's because Heal can reduce trips to the emergency room and mitigate unneeded procedures by lowering barriers to healthcare access among at-risk groups. 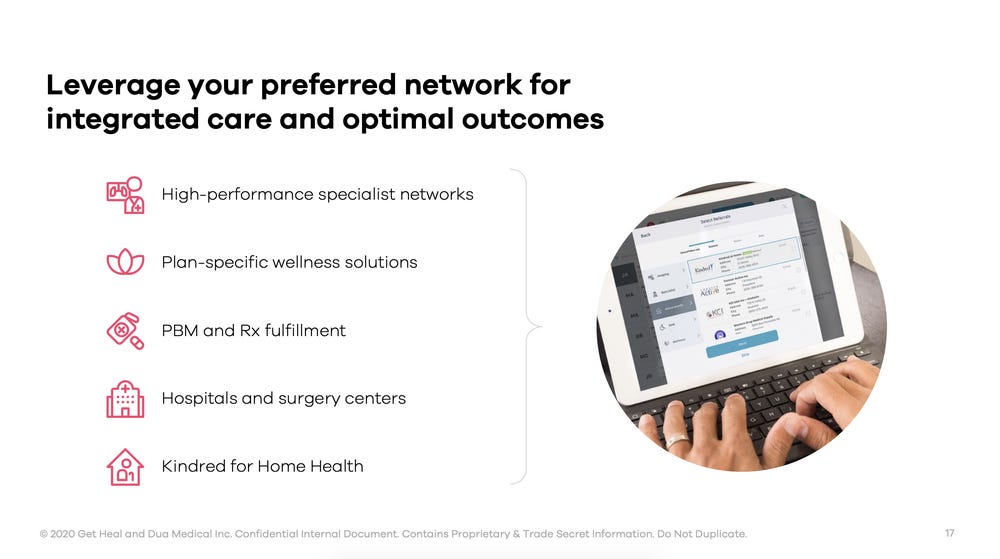 Desai said that Heal has roughly 50,000 patients who rely on its network of doctors for their primary care. 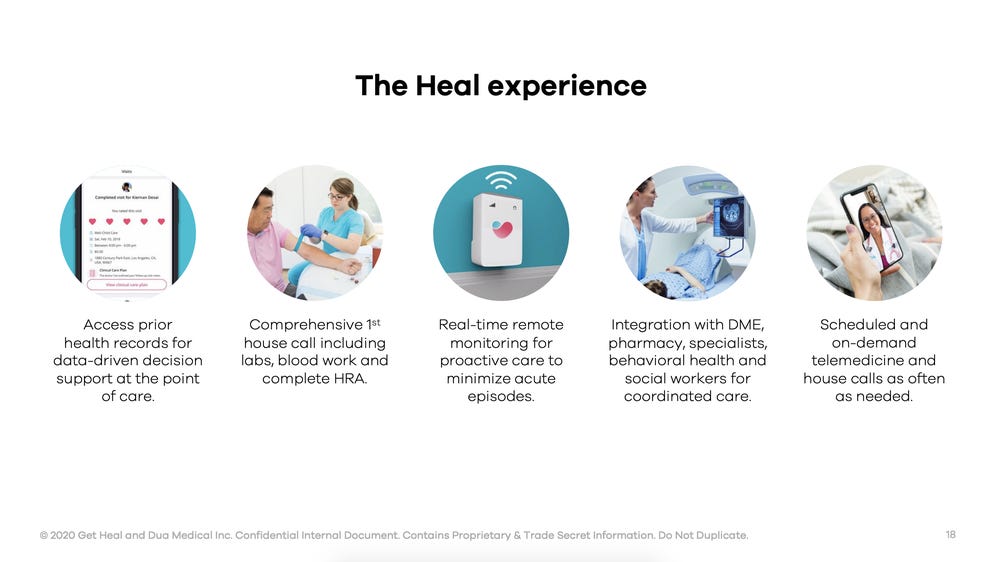 Desai said that Heal's model fit especially well with Humana's vision for what at-home care could look like, which he explained during the pitch process. 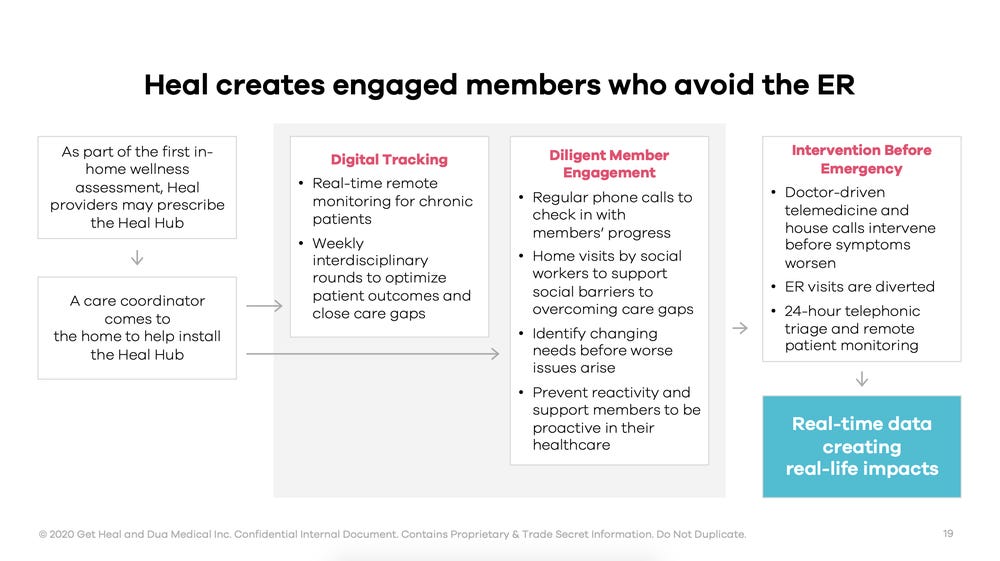 Now, Heal works with 5 insurer networks to provide access to its healthcare providers for a growing roster of patients, Desai said. 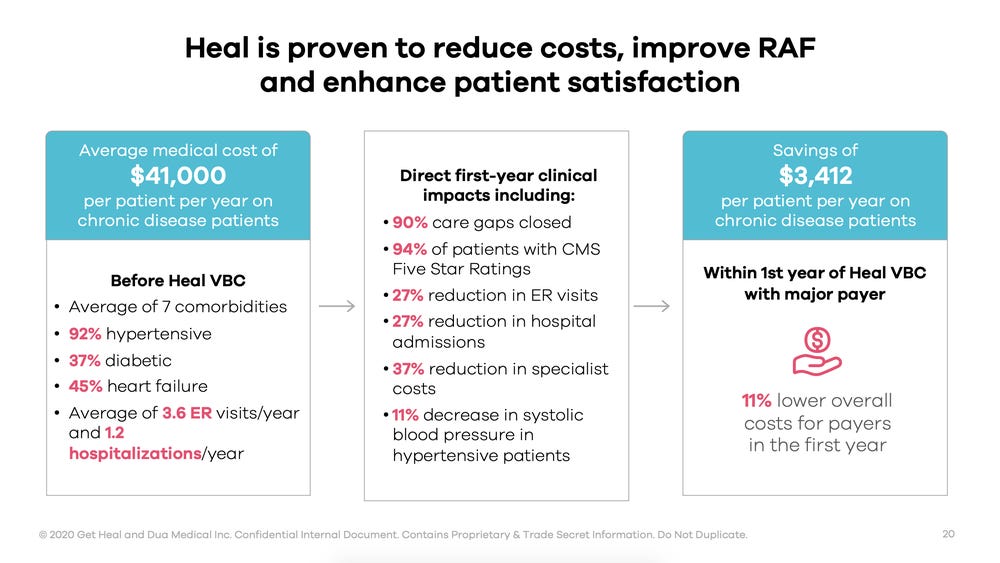 Heal relies on providing preventive care as a way to catch chronic and costly conditions early, saving patients and payers in the process. 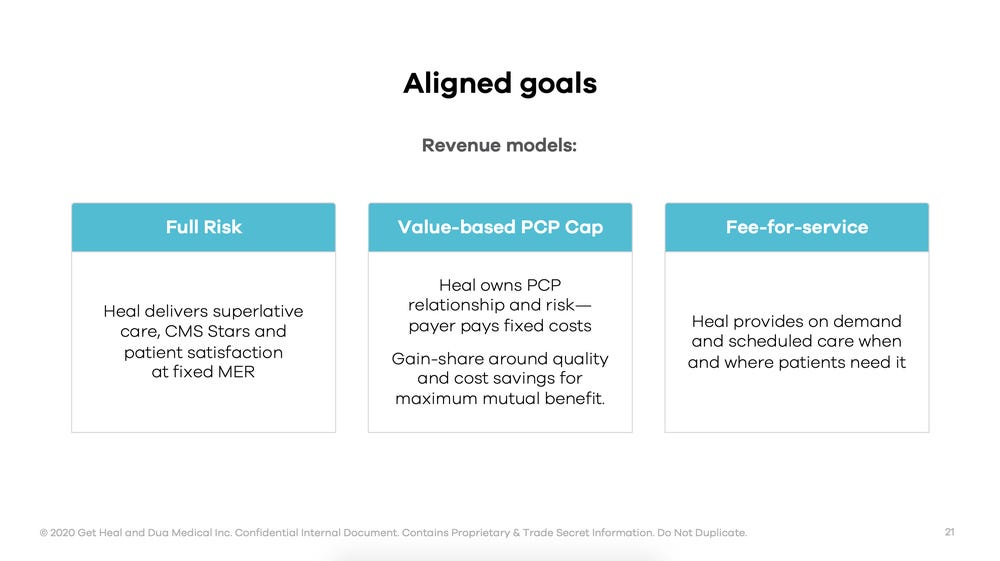 Heal's model is based on working directly with insurers to give patients access. 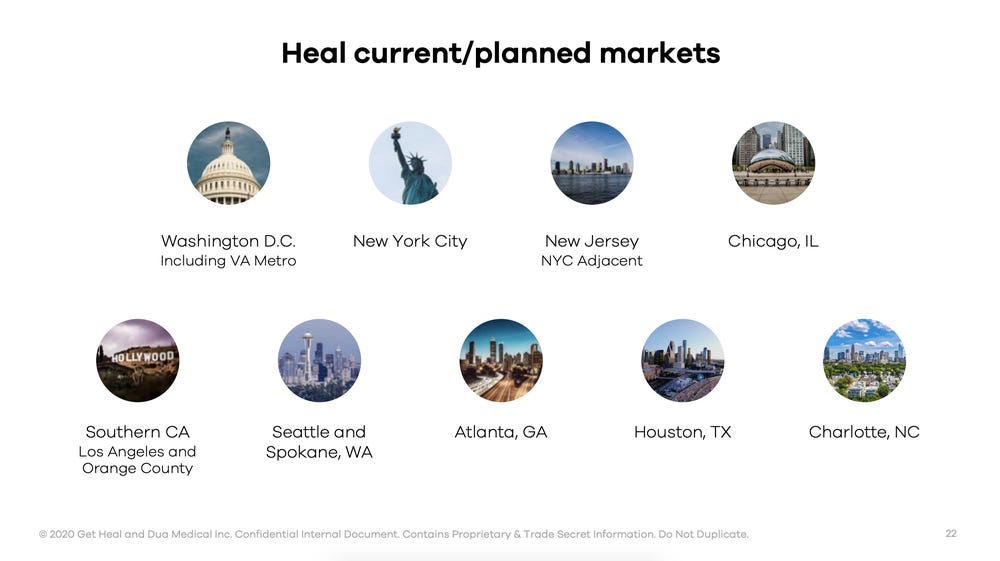 By partnering with Humana, Heal will have access to more markets than before. Telehealth is largely regulated by states and local jurisdictions. 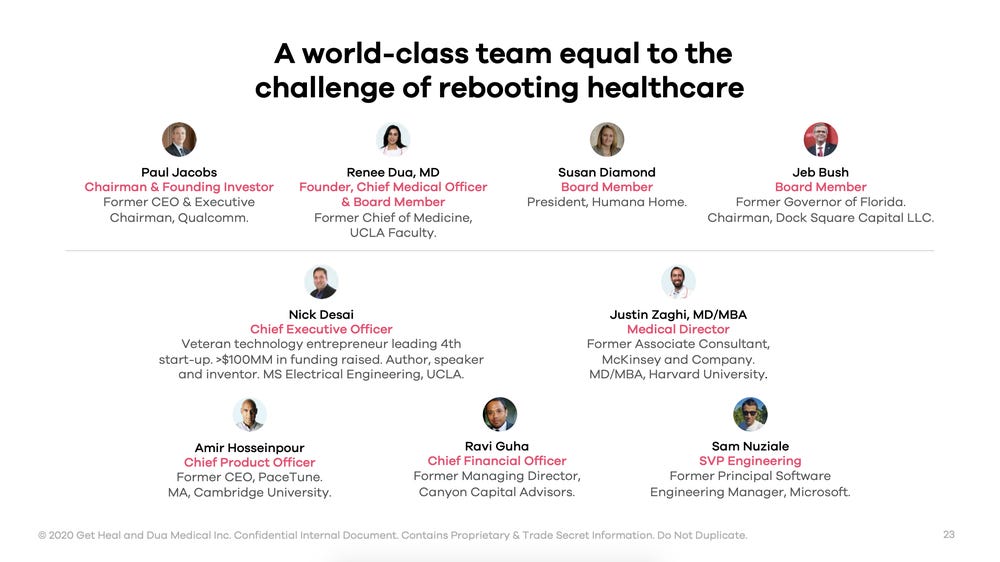 The pitch closed with a highlight of Heal's leaders and early investors. Including the Humana deal, Heal has raised roughly $174 million since 2014, according to