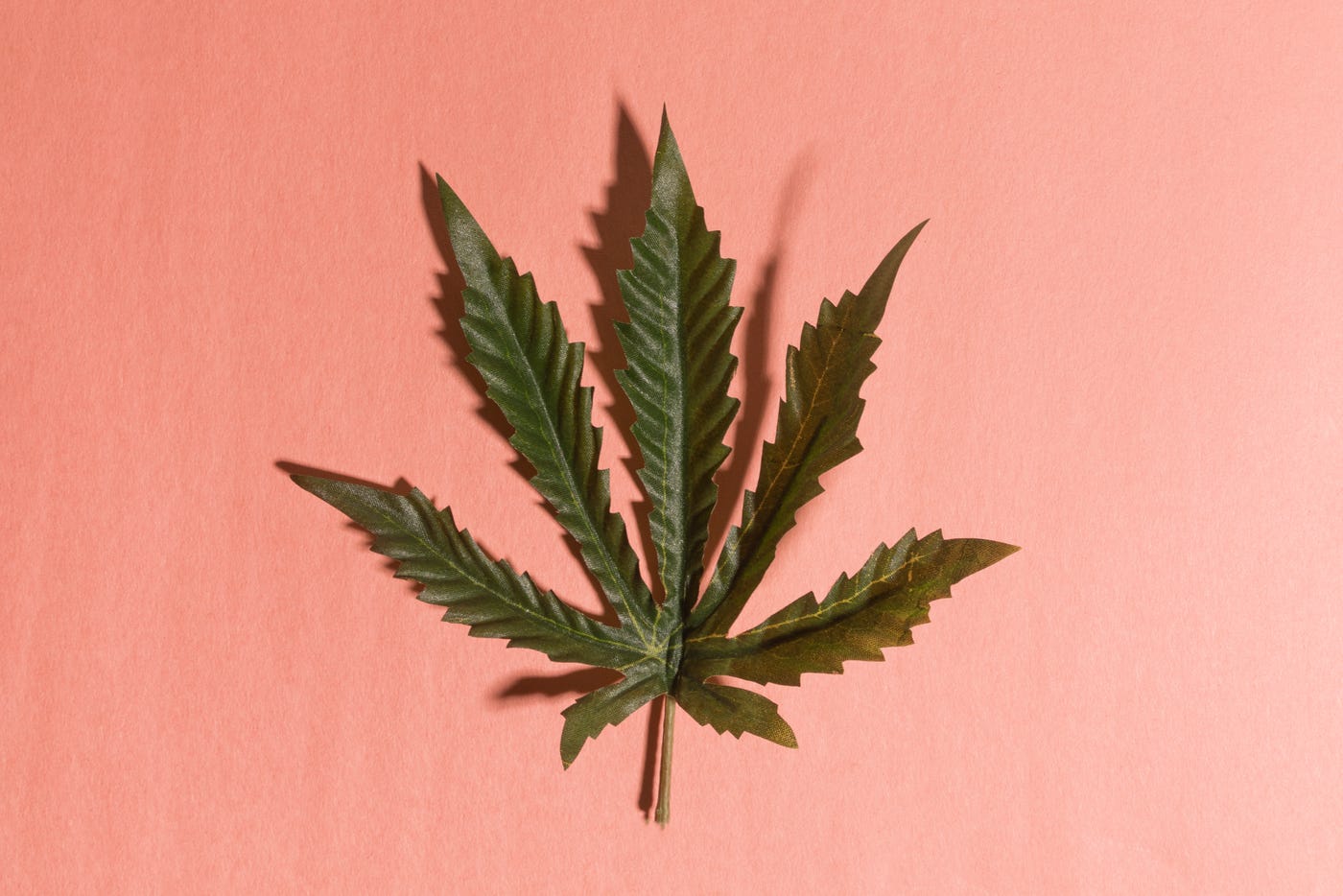 The Bend, Oregon-based company uses software to connect cannabis consumers — who can order from the comfort of their own homes — to local dispensaries in their area.

CEO Ross Lipson, one half of the pair of brothers that runs the startup, previously founded a food delivery startup he sold to Just Eat in 2012. Lipson said that while Dutchie has some similarities to his previous ecommerce business, working in cannabis is a totally different ballgame.

Read more: We got an exclusive look at the presentation that wellness startup B Great is using to raise $2.5 million to chase down the $2 billion CBD market

“The food space has been around for a long time,” Lipson told Business Insider. “There are many players that have defined it and we’re just kind of adding on. We actually have this unique opportunity being in cannabis with such a brand new industry, and it’s evolving so fast that we get to define it.”

Mainstream VCs are warming up to the cannabis industry

Thrive Capital, for its part, is one of the few mainstream venture funds that has invested in the cannabis tech space, having invested in LeafLink last year.

“I think VCs are warming up to the cannabis space,” Lipson said. “Especially on the tech side. But it’s moving slow.”

Most mainstream funds are barred from investing in cannabis because their investors — or limited partners — have specific clauses in their contracts that prevent VCs from investing in industries like cannabis, or gambling.

Read more: The cannabis-tech startup Fyllo used this pitch deck to land $26 million. Here’s an inside look at how it’s using AI to shape the future of cannabis retail.

But as cannabis becomes more mainstream — spurred by the “essential business” designation many dispensaries received at the height of the lockdowns associated with the pandemic — Lipson says that venture funds are cautiously opening their doors to the sector as cannabis use becomes more widespread.

“The needle is moving in the right direction,” Lipson said.

Here’s an exclusive look at Dutchie’s Series B pitch deck: 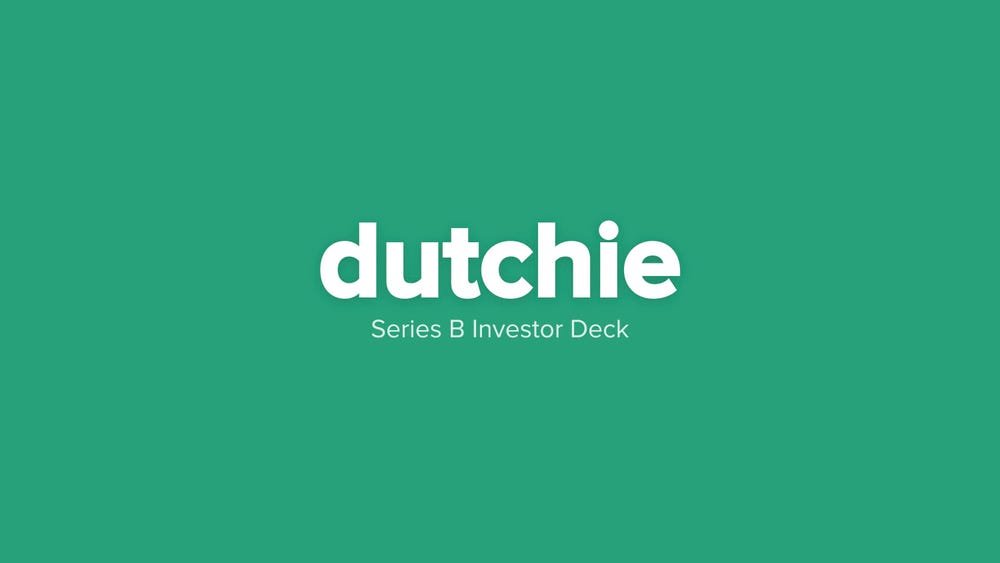 Dutchie is an ecommerce startup that uses software to help people order from local dispensaries while they're at home. Cannabis dispensaries can use Dutchie's software to order products from their suppliers, optimizing their spending on what consumers are likely to purchase. 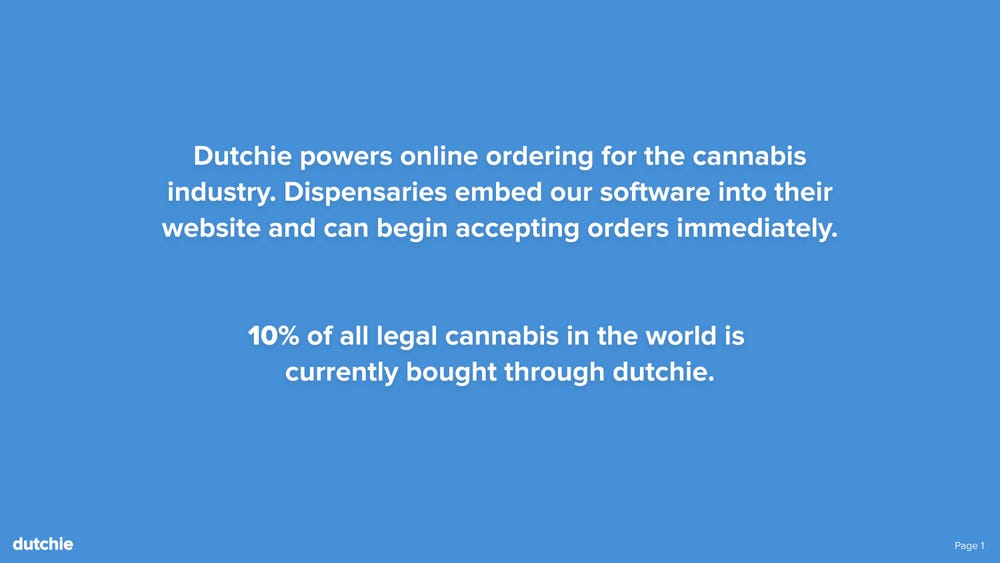 Its initial slide explains that approach to online ordering in the cannabis industry. Dutchie's deck notes that 10% of all legal cannabis is bought through its software. 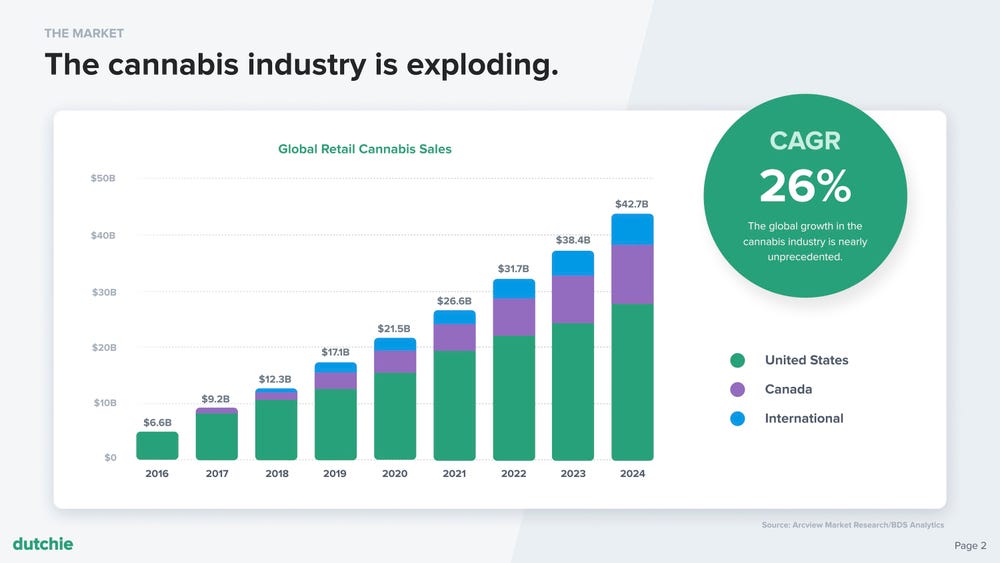 Dutchie's online presence is a notable part of a growing market. The cannabis industry is growing rapidly and could hit $42.7 billion in sales in the next four years. 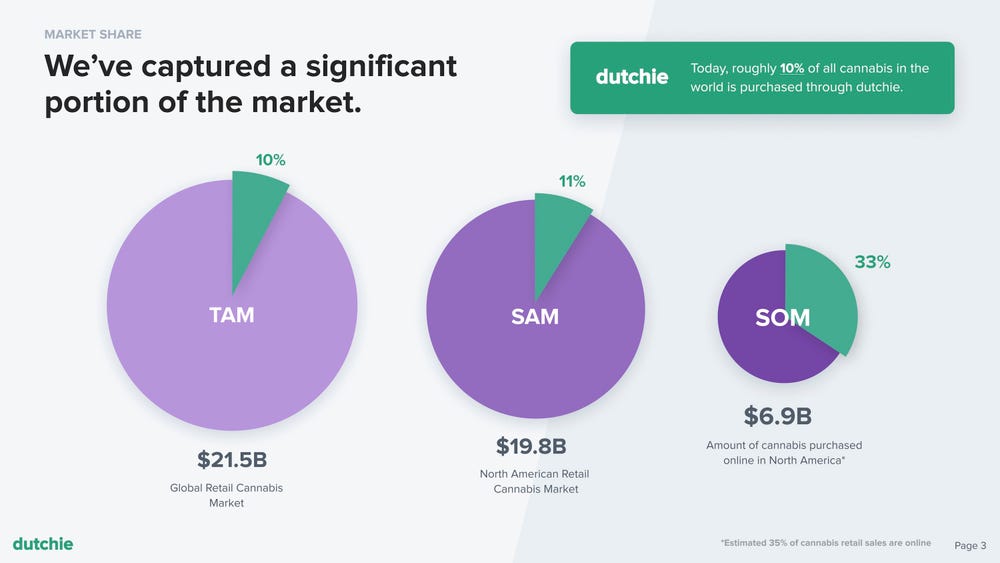 market share, and how that compares to the competition. Today, 33% of all online cannabis purchases in North America happen through Dutchie. 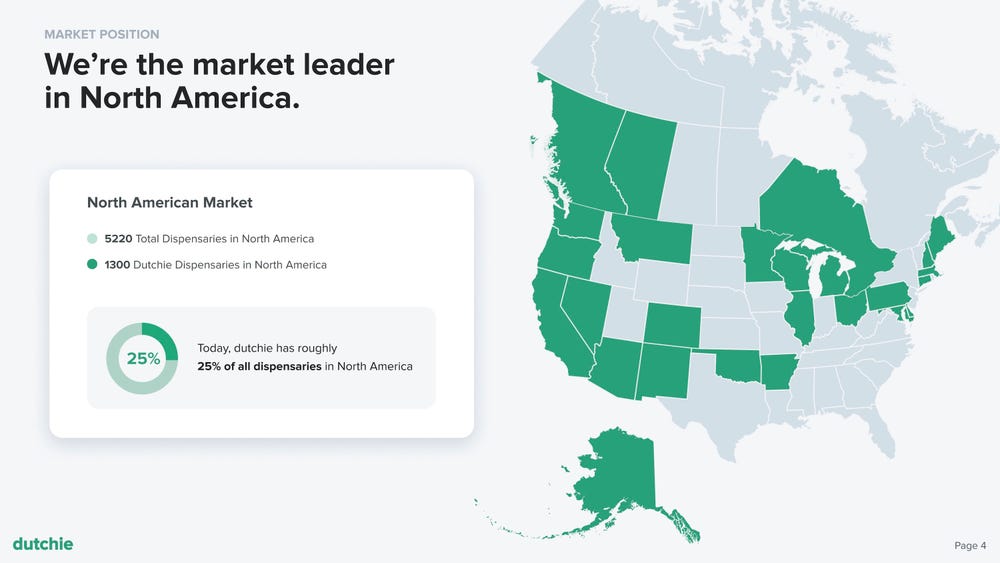 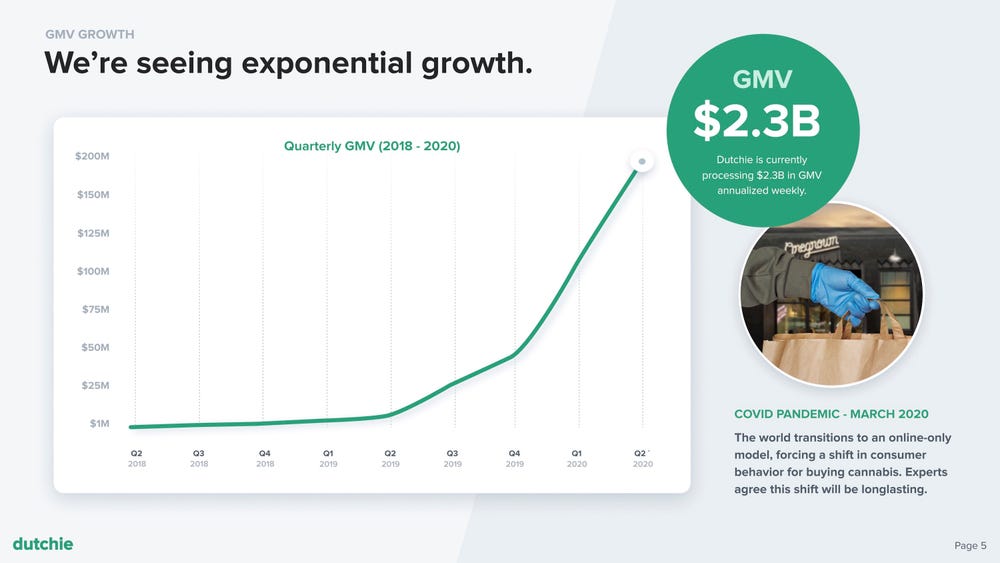 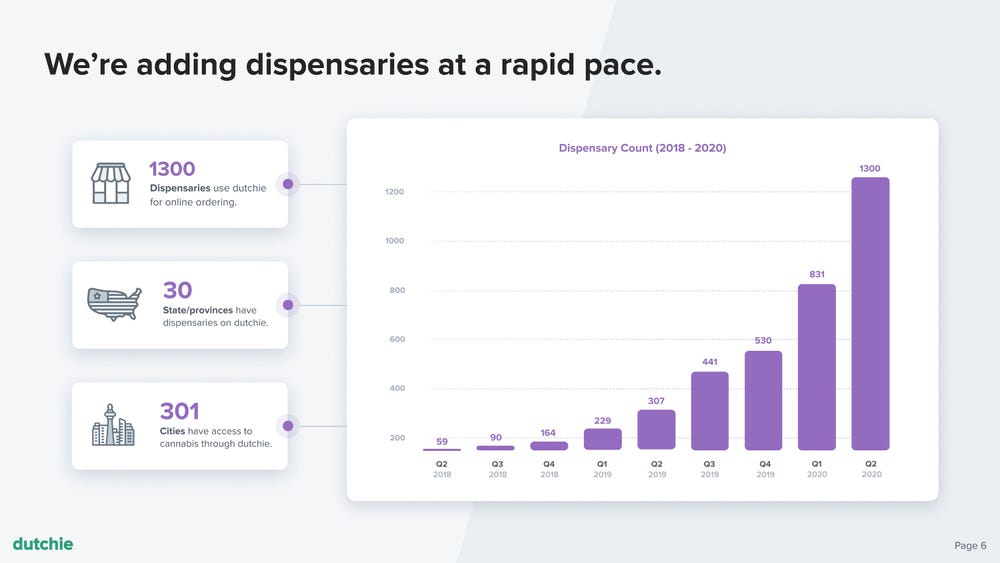 Attracting new dispensaries to its platform is critical to the startup's growth. 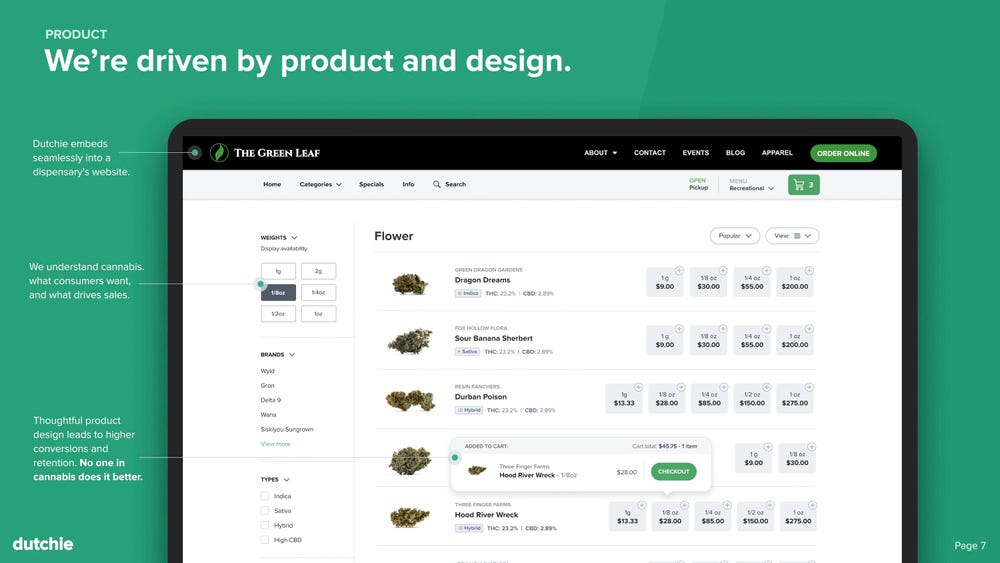 Lipson said investors wanted to know if the platform could get repeat customers, who may spend a little more time – and more money — through the platform each time they order. 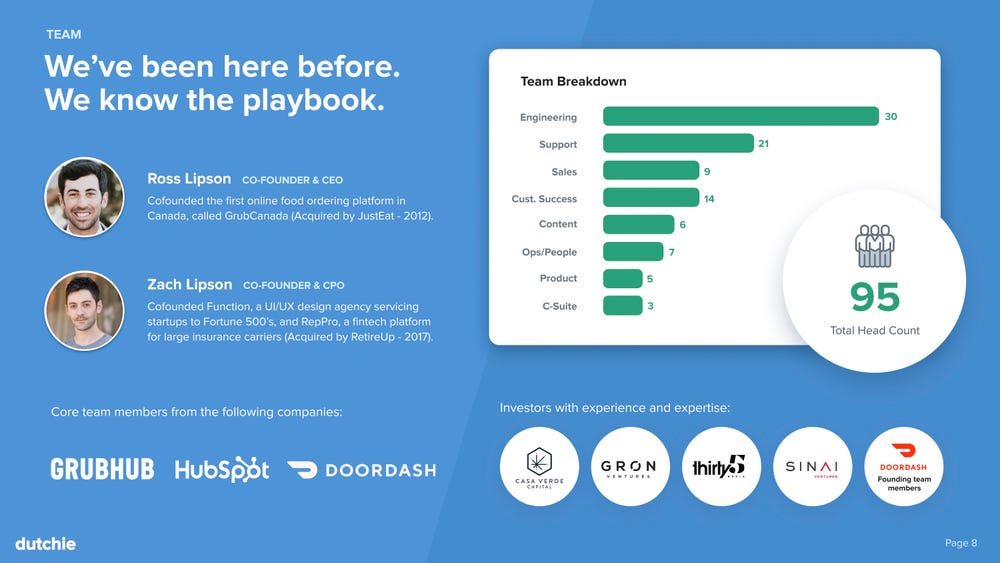 Dutchie's executive team consists of Ross and his older brother. He says they argue like brothers do but somehow, they make it work.