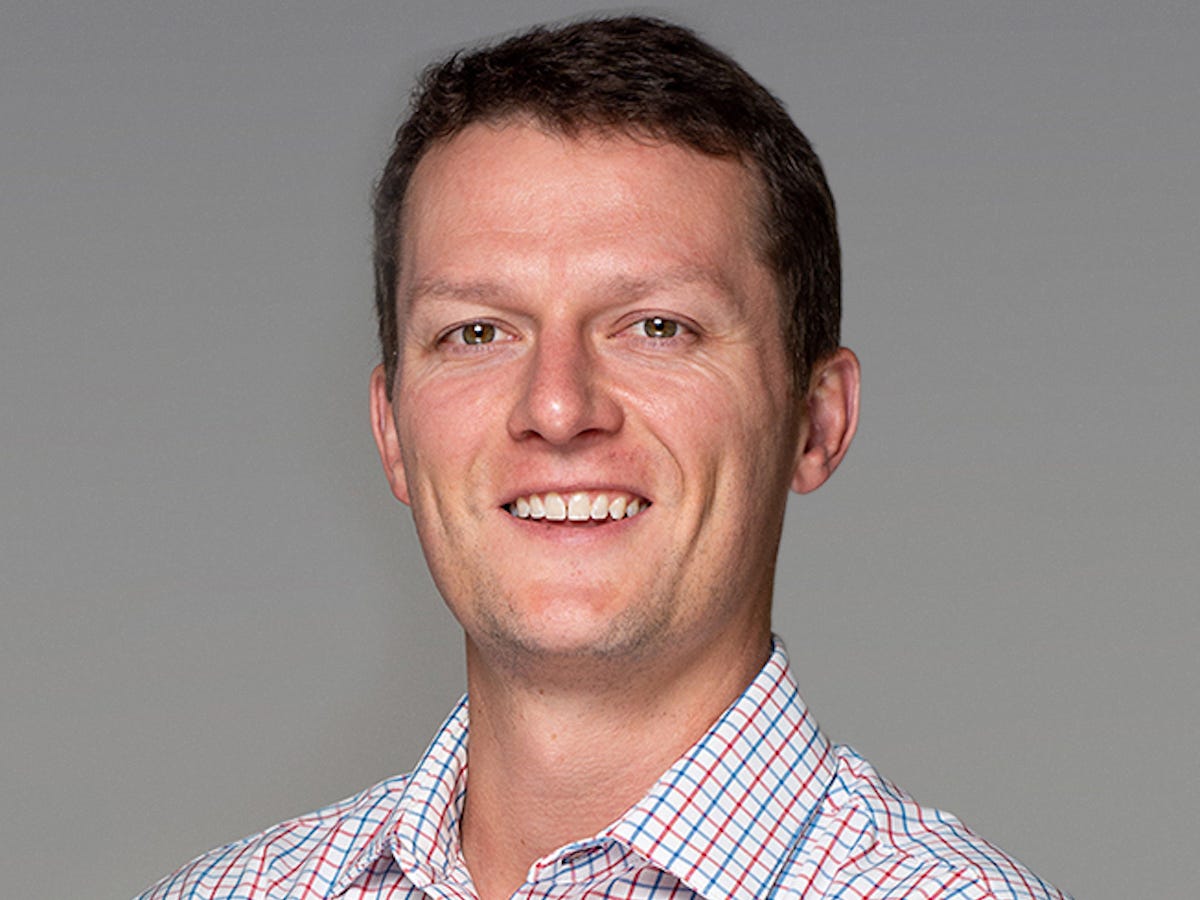 Venture capitalists have been pumping billions of dollars into startups over the last five years. Those startups are staying private longer, and investor returns are looking bigger and better by the day.

The biggest windfalls, however, don’t necessarily come when a startup goes public or gets acquired. Those that make it big tend to be investors who wrote the company’s first check. In 2014, that was commonly called a seed round. Founders had little more than an idea and a PowerPoint, and investors wrote modest checks to see what the team could produce with a small amount of funding.

Fast forward to 2020, and conventional wisdom is all but thrown out the window. A new report out Tuesday from DocSend, a cloud-based document sharing startup that specializes in things like pitch decks, found that institutional venture capital is trickling down into pre-seed funding rounds that often come in the earliest days of a company.

“Pre-seed isn’t the new seed,” DocSend CEO Russ Heddleston told Business Insider. “We are seeing that, for a particular range of companies, there is a logical range of money you need if you aren’t wealthy enough to prove out the metrics to prove out the company. It’s a formalization of the angel round.”

The report looked at pitch decks of 174 startups that self-identified as pre-seed stage and sent pitch decks to investors via DocSend. The startup’s software tracks how many times an investor opened the files, how long they spend reading the deck, and which parts of the deck they spent the most time reviewing.

These are the 9 key milestones DocSend found could make or break a startup in the earliest days. 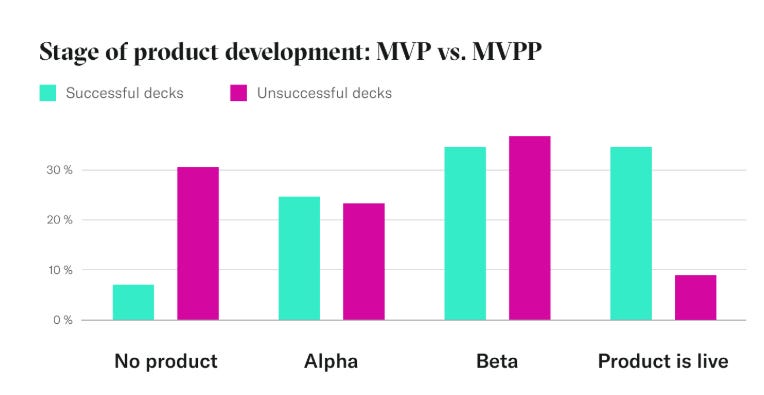 You've honed in on the MVP.

Before Heddleston started DocSend, he created and sold a young company to Facebook. Now, entrepreneurs of all stripes ask his advice for grabbing the attention of major tech companies and Sand Hill Road investors — and his answer is to always have an MVP, or minimally viable product. "Pre-seed isn't pre-idea," Heddleston said. "A lot of people who ask for advice tell me, I have this minimal viable PowerPoint, but the data says if you are going to raise $500,000, you need to have a product." According to the report, investors spend roughly 3 minutes reviewing a deck but spent a majority of that time looking over product slides. This is the opposite of what happens in later stages of fundraising, Heddleston said, because investors assume founders have figured out product-market fit if they have achieved specific revenue goals. On the flip side, it's a bad sign if investors gloss over the product and get hung up on the business model, Heddleston said. That should be less of a concern at earlier stages because the team has yet to figure out what exactly the business will look like. 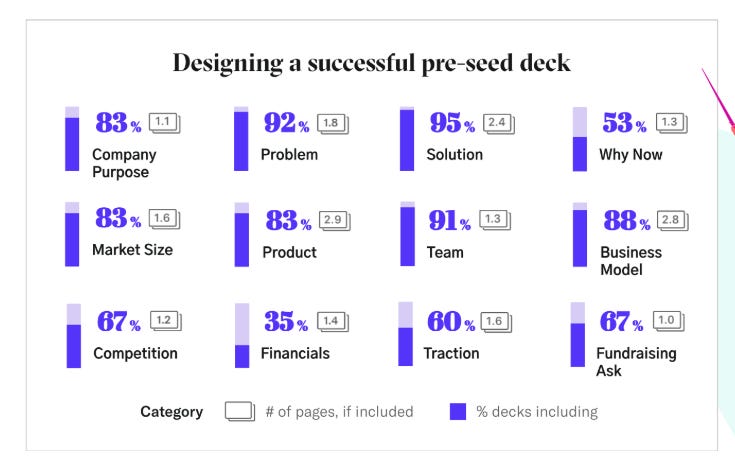 The pitch deck looks and feels like something from a more mature company.

Investors are creatures of habit, Heddleston said, and will often expect every startup they meet with to present roughly similar decks. So even though a pre-seed company will have fewer data available, the general format of the presentation should roughly mirror that of a later-stage company. "The companies that are on the West Coast organize their decks in a more standard way," Heddleston said. "Maybe they have a friend that raised money or an investor or an advisor that could help." None of the 174 startups in the study had the exact same presentation format. But all West Coast companies did include dedicated slides to the problem they wanted to solve, what the solution was, and who was part of their team. Startups in other geographies might not have the same network to know what is expected of their pitch decks, Heddleston said.

The deck is edited down to roughly 12 slides from 20 slides.

The report found that investors spend a little over 3 minutes, on average, reviewing pitch decks that were sent to them by founders. The average pitch deck, however, is about 20 slides, meaning that investors are spending about 9 seconds on each slide. Heddleston said the discrepancy highlights how important it is for entrepreneurs to be concise in their decks. "People don't spend a ton of time reading these things," Heddleston said. "Don't write an entire novel. Manage the content and manage the time you spend on it." Successful pitch decks included 12 distinct slides, the study found. Those include things like problem and solution, but also more nuanced points like why investors should back a company now and what future traction might look like. 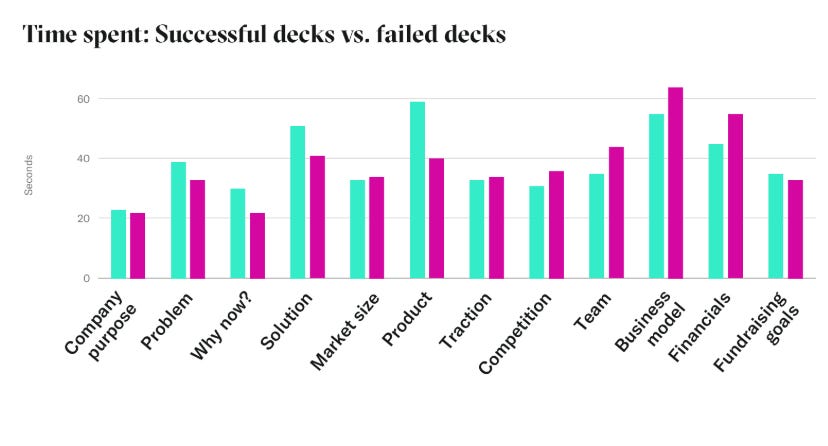 Of all the slides to include, Heddleston thinks including a "Team" slide is often the most overlooked but can be the most important. This is especially true of teams that are not located in Silicon Valley, and are less likely to have met potential investors in person. "I can't invest in a company that doesn't have any people," Heddleston said. In all, just 89% of startups in the survey opted to include the slide, although all West Coast companies had it. The larger disparity among startups outside Silicon Valley means there might be a lack of clarity about what investors are looking for. "Uncertainty is a killer for people going through this process because they don't know if they are doing okay or not," Heddleston said.

The team can be flexible enough to incorporate feedback from investor meetings to address questions proactively in later meetings.

One of the biggest differences between pre-seed funding rounds and angel rounds is how many meetings founders typically have, Heddleston said. With angel networks, there are only a handful of meetings before angels tend to invest because they likely already know or have met the founder before. With an institutional round, founders might have to cast a significantly wider net. The report found that founders will take roughly 26 investor meetings, on average, before closing the round. But more isn't always better, Heddleston said. "Some people think it's better to pitch more, but there are diminishing returns," he said. "If you give 30 pitches and you get 30 'nos,' it's time to change something. Don't do 30 more pitches." Even two meetings that provide similar feedback is enough to make founders stop and think about changing things up, Heddleston said. 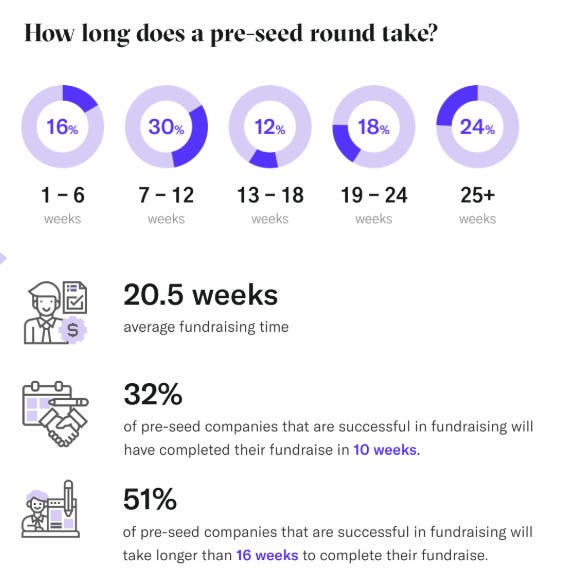 Compared to later funding rounds, a pre-seed check might seem like chump change with a typical max amount hovering around $500,000. But that doesn't mean investors will skip doing diligence on the investment, and usually means the round takes longer to close than those down the road. "It's the most painful round of funding for a company," Heddleston said. "Every round of funding is easier than your pre-seed." He advises that founders have enough capital on hand to outlast the average 20-week fundraising process to avoid any kind of financial crunch. Even then, the report found it takes about 3-and-a-half weeks for the funds to land in the company's bank account after the round is officially closed. "People assume it's really easy, but it takes forever," Heddleston said. "People don't budget time correctly for the pre-seed round." 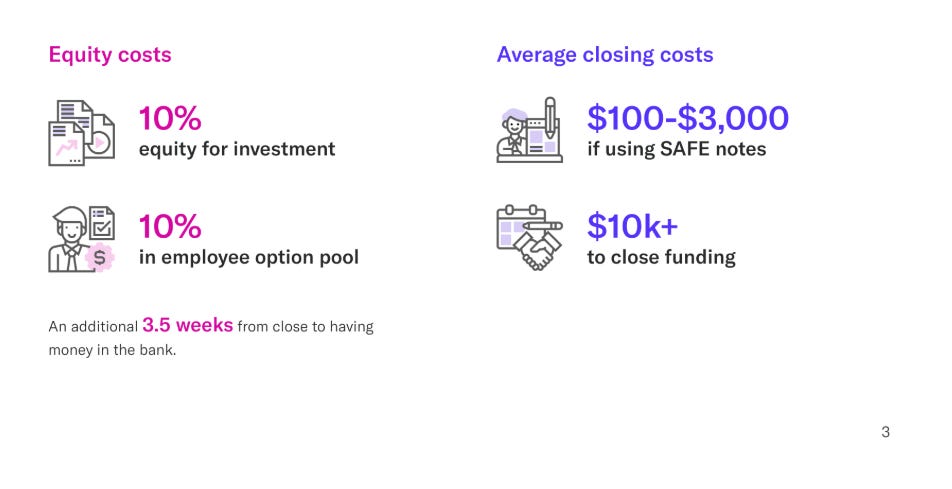 Be ready to give up at least 10% of the company to outside investors, or be prepared to take a valuation cut.

Many founders want to optimize for the highest valuation possible, Heddleston said, but it's not always the right decision out of the gate. Typically, investors seek 10% ownership of the company with pre-seed funding rounds and value the startup accordingly. Founders will also set aside another 10% for an employee option pool to start hiring in earnest. "People try to optimize that, but really they should just focus on getting the amount raised and get back to work," Heddleston said. He said that entrepreneurs that are building a highly valued company can easily see higher valuations in later rounds once they have revenue and other hard metrics to show. If they are overly concerned with ownership, he advises holding out until the seed round if possible. "Otherwise, just don't stress about it," Heddleston said. 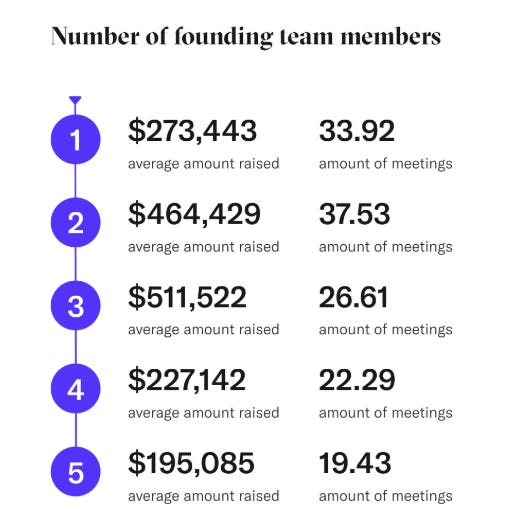 You've brought on cofounders, or asked larger founding team members to step down.

Although single founders are not at all uncommon, the report found bringing on a cofounder can help increase the pre-seed round size itself and help cut the number of investor meetings. But Heddleston advises against bringing on more than two additional cofounders. "You get diminishing returns after 3 founders," Heddleston said. Investors hesitate to work with larger teams because they've seen hundreds of startups fail because of conflicts among founders. So the rational thinking goes, the more founders, the higher chance of conflict. "You can't have 5 founders because you can't all be equal," Heddleston said. "It comes down to, which of you will be booted off the island and how quickly." 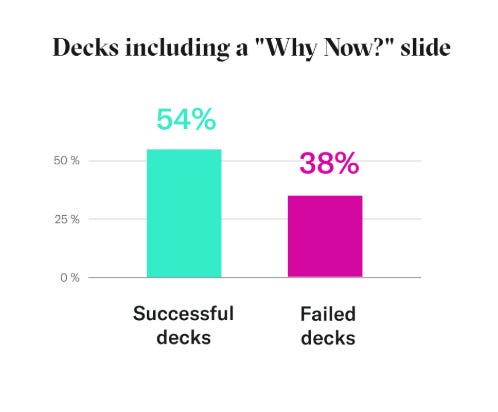 The startup has a consistent narrative.

But at the end of the day, nothing else matters as much as the story founders want to tell to investors, Heddleston said. It is one of the easiest parts to overlook because founders are knee-deep in the trenches of building a company, but they often struggle to effectively communicate what it is they are trying to build. "You need to convince someone you can build and run a billion-dollar company," Heddleston said. One of the most effective ways to do that is to include a "why now" slide, according to the report. It can help provide context, highlight current technical shortcomings, and explain market conditions that are ripe for growth in ways that a competitive landscape graph can't. "How to craft a great narrative is not something you can automate," Heddleston said. "It's hard to create that from scratch. It's like a great song. I can tell you if it's a catchy song, but it's not like I can go make a catchy song myself."