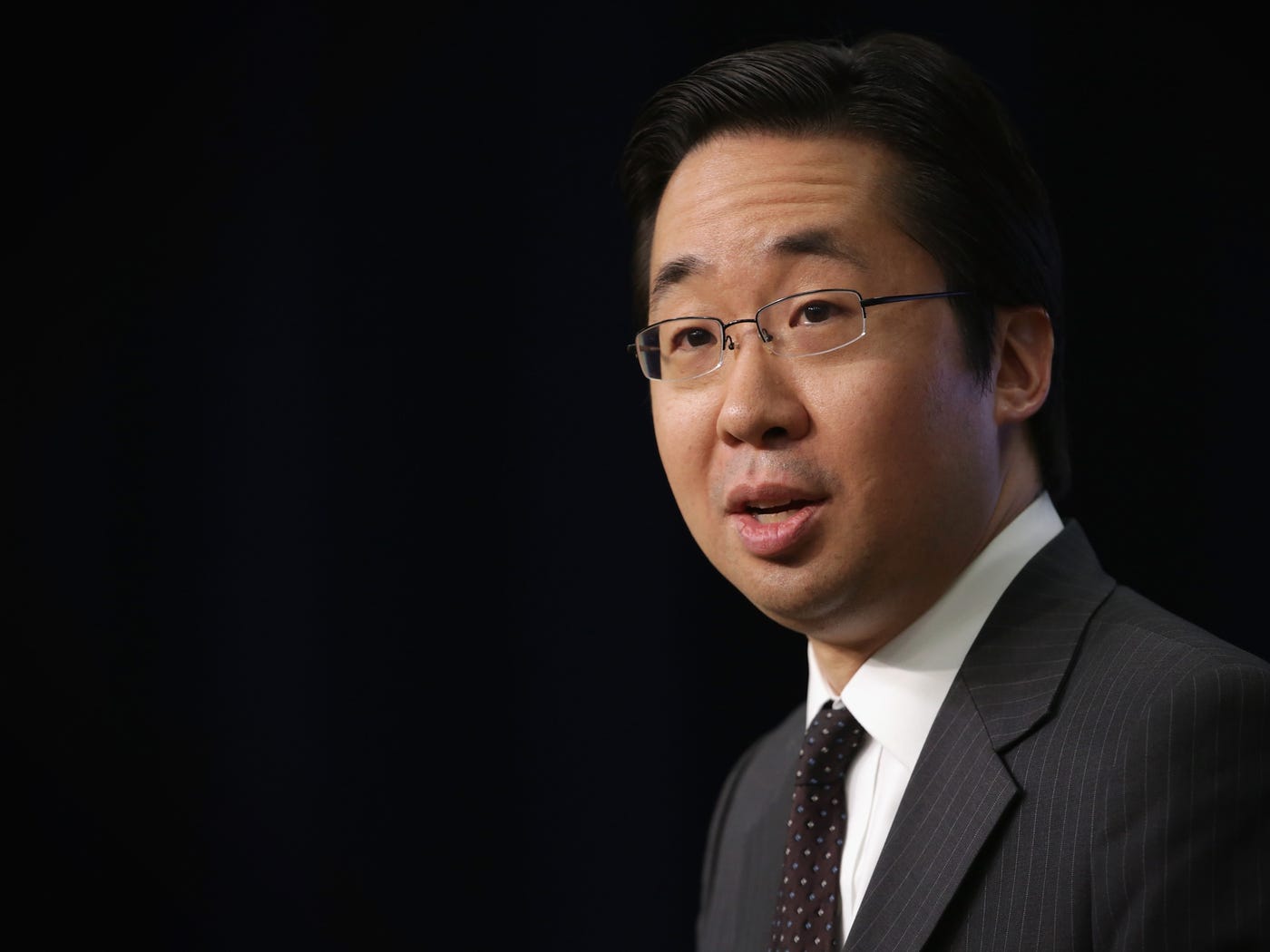 A buzzy startup that wants to reinvent the way we take care of seniors in America has big ambitions for its first five years, according to an investor presentation obtained by Business Insider.

The startup, Devoted Health, was founded to sell private health insurance plans to US seniors, a market that’s growing rapidly. It used the slide deck when it raised $300 million from investors led by Andreessen Horowitz late last year. The company was then valued at $1.8 billion, before it began covering a single customer.

In the presentation, Devoted Health laid out a vision for rapid growth. The company said in the deck that it planned to sign up 5,000 members for this year and grow that to 103,722 by 2023. It expects to make about $1.2 billion in revenue that year while generating a small net loss.

“We don’t comment on private documents,” Kenneth Baer, a spokesman for Devoted Health at Crosscut Strategies, said in an emailed statement. “We are focused on Devoted Health’s unique mission to deliver to our members the kind of care that we would want for our own family.”

Andreessen Horowitz, which led the funding round, also declined to comment.

Never miss out on healthcare news. Subscribe to Dispensed, our weekly newsletter on pharma, biotech, and healthcare.

Startups and established insurers are competing for Medicare Advantage customers

Both startups and big insurers are quickly growing in the lucrative market for private health plans for seniors, called Medicare Advantage. Devoted will have to compete for customers immediately with big, entrenched rivals like Humana, UnitedHealth Group, and CVS Health.https://49860b2c293805b6dc5a7633665cf1f0.safeframe.googlesyndication.com/safeframe/1-0-37/html/container.html

Clover Health, a startup founded in 2014, now offers Medicare Advantage plans in seven states. The company, which was valued at $1.2 billion in 2017, now has 40,000 members and is nearly done raising a fresh $500 million round of funding, according to TechCrunch.

Oscar Health, known for selling health plans on the Affordable Care Act’s exchanges, said in August that it planned to move into the Medicare Advantage market. The company was then valued at $3.2 billion, and it had about 227,000 members as of September 30.

About a third of people on Medicare are enrolled in private Medicare Advantage health plans. People can typically choose to enroll in Traditional Medicare or Medicare Advantage plans when they turn 65; either way, their health needs are largely funded by the US government.

Medicare Advantage works much like private insurance does for those under 65. It’s designed to allow people to shop around and choose among different plans, which may restrict which doctors and hospitals they can use. The US government, in turn, pays the insurers a certain amount for each person covered, creating an incentive for the insurer to try to keep that person healthy and out of the hospital. If the insurer does a good job of caring for its customer at a low cost, it can keep the extra funds as profits.

Devoted Health told investors it expected to both do a particularly good job of managing its customers’ medical needs at a lower cost and have margins about three times as wide as others in the industry, by one measure.

To get there, Devoted in part plans to make money by owning its own medical group, in addition to the insurance operation.

Devoted was founded in 2017 by two brothers, Ed and Todd Park. Before Devoted, Todd founded the health IT company Athenahealth and served as the United States’ chief technology officer during the Obama administration. Ed, Devoted’s CEO, was the CTO and later the chief operating officer of Athenahealth.

The company’s health insurance plans might look a bit different from traditional insurance in that Devoted plans to do more than pay for visits to doctors and hospitals — it’s also hiring nurses and other employees to keep seniors healthier and out of the hospital.

Because health insurers are in charge of paying for healthcare, they tend to know what’s going on with a patient: Have they been in for a checkup, or have they had a recent trip to the emergency room? Knowing that, the insurer — in this case, Devoted — can clue in the other parts of the system so that the primary care doctor, for example, knows when their patient has been in the hospital and can follow up.

To do that, however, the Devoted team had to build out both its technology to process claims and its network of doctors it can work with.

Investors are betting the approach will pay off and lead to a more efficient healthcare system.

“Medicare Advantage is today the simplest way to align financial incentives across the various parties in the system,” Bryan Roberts, a Venrock partner who’s a Devoted investor and board member, told Business Insider in October after the company closed its funding round. “Therefore, you can drive better efficiency in the healthcare system.” 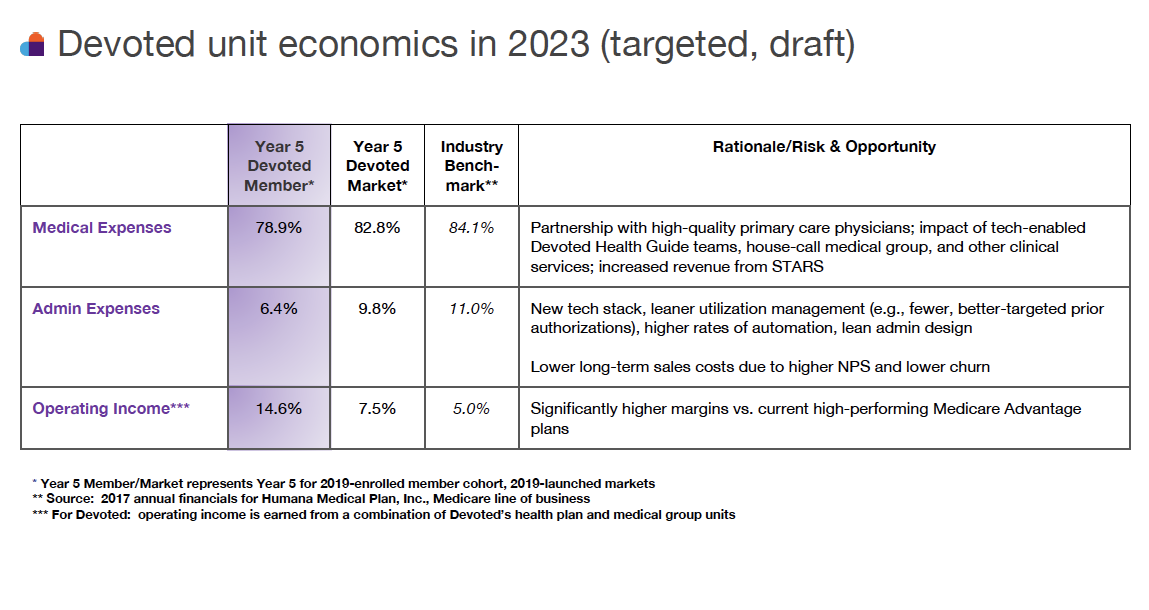 Through January, Devoted had enrolled 2,114 members in the Florida counties where it is initially offering plans, according to the Centers for Medicare and Medicaid Services. 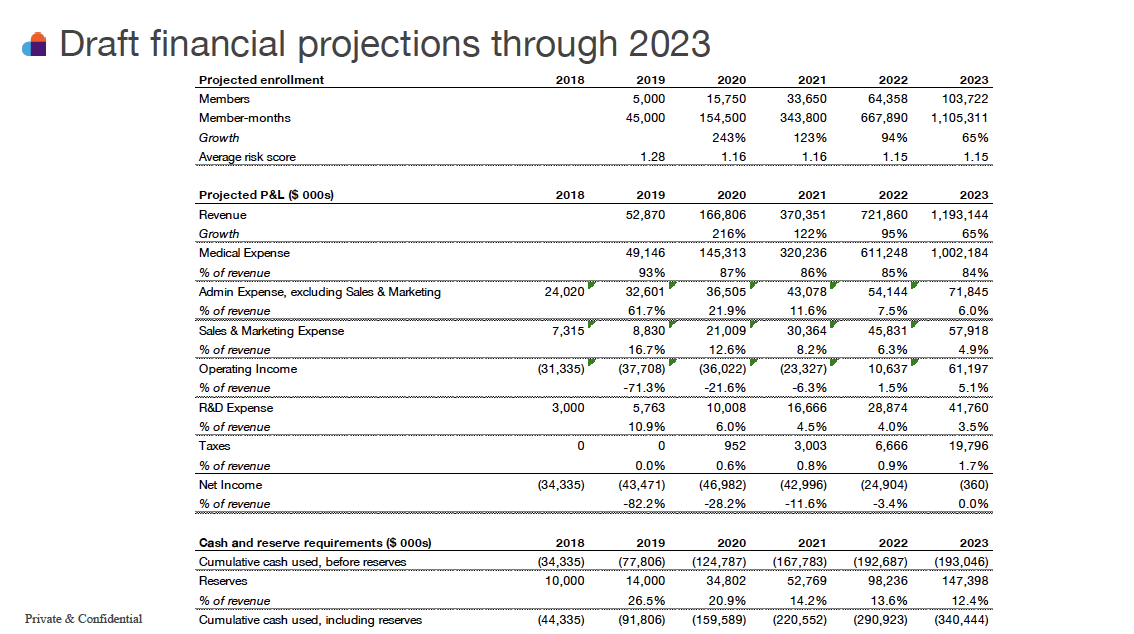 Here's the slide that includes its projections for getting to more than 100,000 members: 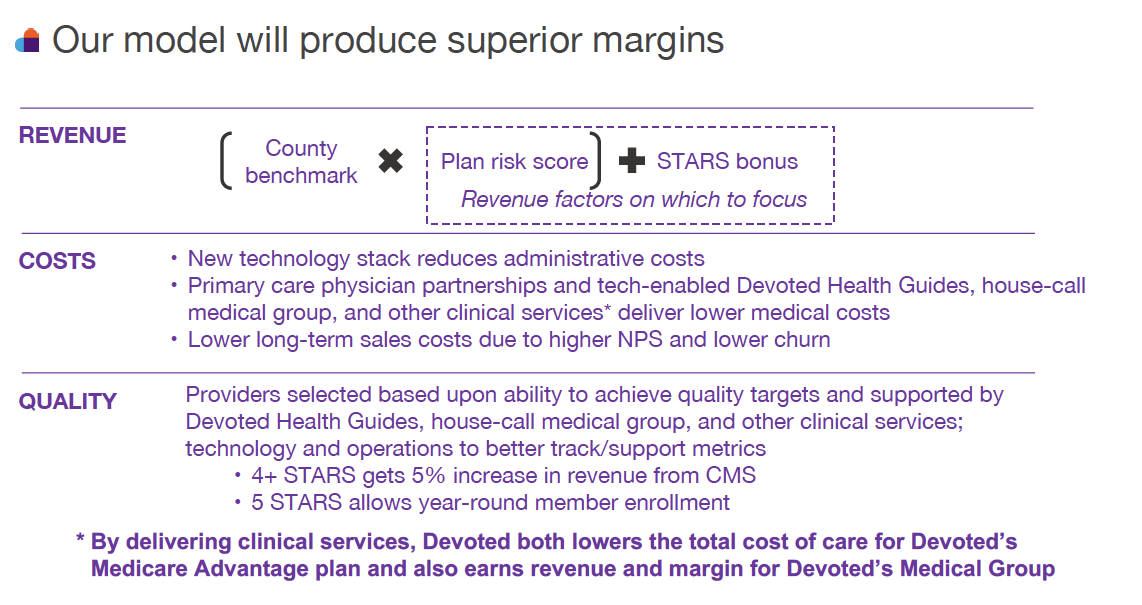 This is the slide that explains why Devoted thinks it can generate better margins than other Medicare Advantage health insurers:

One expert said Devoted wasn't drawing a perfect comparison between itself and other Medicare Advantage plans because it was using just one group of members. "It's apples-to-pineapples at best," David Anderson, a researcher at Duke University who previously worked at a health insurance plan, told Business Insider after reviewing the slide. "They're choosing what they believe is their best cohort." Anderson described the projections as "extraordinarily optimistic" but said the company could save the health system a lot of money if it pulls this off. "If they can do this, good for them, because they will have found a way to provide good healthcare at a significantly lower cost," Anderson said. Katherine Hempstead, a senior policy adviser at the Robert Wood Johnson Foundation, told Business Insider it was difficult to parse the financial projections without knowing whether Devoted would expand its footprint or how the company plans to use its Devoted Medical Group. "I don't think they're just pulling numbers out of a hat. They know a lot," she said. "There's just an unbridled enthusiasm in the insurance segment.