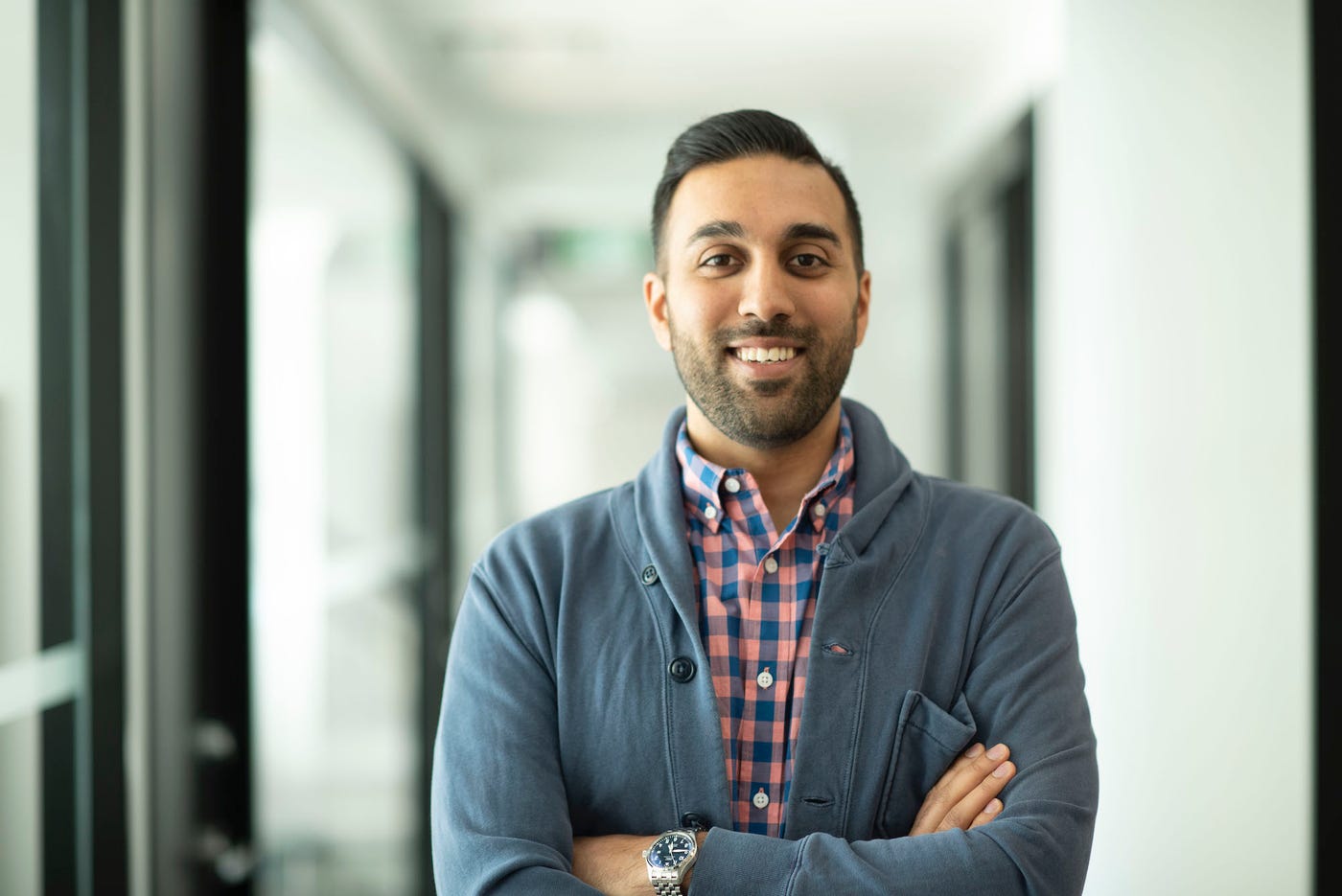 The round was led by Drive Capital, a venture firm based in Columbus, Ohio, and included pharmaceutical company Chiesi Farmaceutici, GreenSky Capital, and members of Cyclica’s management team. The company did not disclose its valuation.

Cyclica CEO Naheed Kurji told BI in an interview that the startup’s technology is designed to “flip the problem of drug discovery on its head.”

Drugs are often designed under what’s known in the pharmaceutical industry as a “target-centric approach.” The idea is that a drug is specifically designed to fix a particular problem that is causing a disease.

But drugs have unintended consequences. Tylenol, for example, will get rid of your headache, but it can also cause gastrointestinal issues.

That notion, that drugs interact with hundreds or thousands of proteins on their way to treating a disease is called polypharmacology. And that’s where Cyclica comes in.

Cyclica uses machine learning tools — what Kurji calls computational polypharmacology — to find drugs that interact safely with all the different proteins they may come across in a human body. That requires a lot of computational resources, and Cyclica has developed software to carry out this approach.https://tpc.googlesyndication.com/safeframe/1-0-37/html/container.html

Getting an early start is crucial to fundraising, Kurji said

In order to raise the Series B round, Kurji says that Cyclica opened the round shortly after closing its Series A in July. He says it was crucial to get an early start on fundraising — even though Cyclica had plenty of cash in the bank and had been generating revenue — since the startup had hit all of its milestones, and that advisors had predicted that the healthcare and biotech market would enter a compression, and it would get more challenging to raise money.

Kurji says they reached out to 40 or 45 different venture firms and met with 20, of which 18 immediately put them under a non-disclosure agreement, a common practice for venture firms that are evaluating deals. Fifteen of those firms were more traditional healthcare VCs, while the remainder were strategic partners such as pharmaceutical companies that have in-house venture funds.

In January, Kurji and his team sat down with a number of investors at the JPMorgan healthcare conference in San Francisco. Those conversations ultimately led to Drive Capital leading the round.

Next, they’d ask about what Kurji calls competitive differentiation, or how a given startup will stand apart from the competition, both scientifically and commercially. Then, they’d look at the startup’s business model, or how it plans to generate revenue over the long term.

Last, they’d ask about what the startup plans to do with the capital it’s raising, Kurji said.

“We probably spent 40% of our time in these pitch meetings on competitive differentiation,” Kurji said, and then about “25-30%” of our time explaining our management team.

“There is so many cutting edge companies in our space. I empathize with the VCs,” Kurji said.https://tpc.googlesyndication.com/safeframe/1-0-37/html/container.html

Psychedelics are a ‘blue sky’ opportunity

Kurji says the Series B capital will be used to build out Cyclica’s team, raising headcount from approximately 35 to 55 over the next few months.

Cyclica is also planning on partnering with leading academic institutions and other biotech companies to spin out joint ventures “to advance the discovery and development of medicines for not just one disease, but for all potential diseases that are conducive to our platform in a more holistic and personalized way,” Kurji said.

Though he said he couldn’t discuss some of the upcoming ventures, Kurji pointed to a partnership Cyclica has developed with ATAI Life Sciences, a startup working on mental health drugs derived from psychedelics.

That partnership, called EntheogeniX Biosciences, will develop drugs that mimic the molecules found in psychedelics like psilocybin mushrooms, to provide mental health therapies without the psychotropic effects.

“Mental health is highly untapped,” Kurji said. Developing a psychedelic-based drug that could treat depression or anxiety and get approved by the FDA would help overcome much of the stigma that society still has about these compounds, Kurji said.

Check out the deck that Cyclica used to raise $17 million: 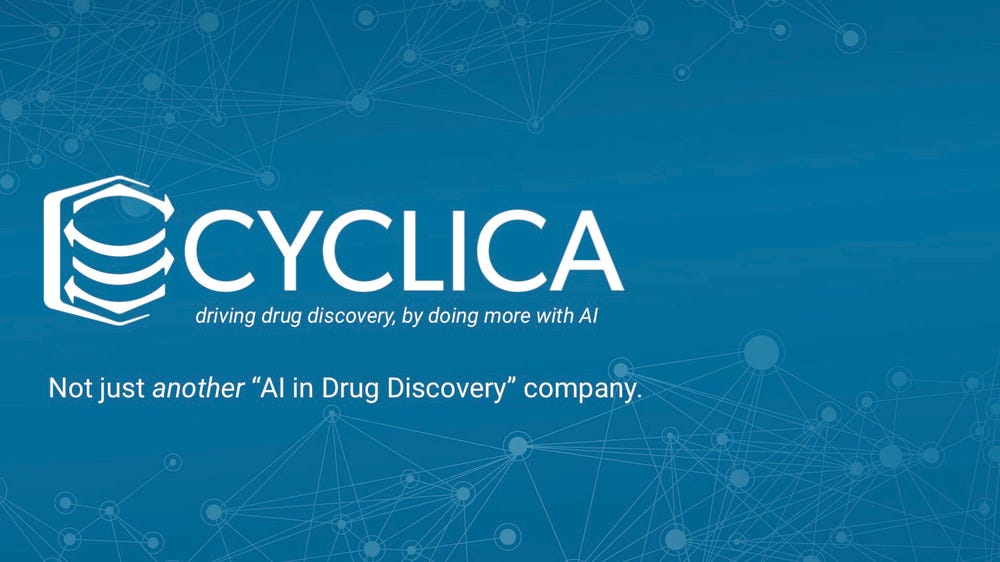 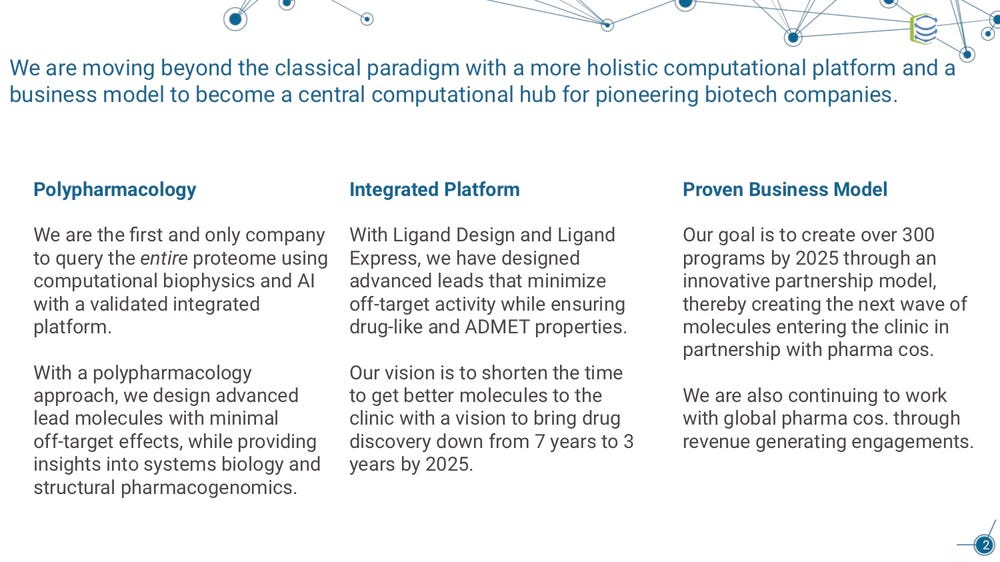 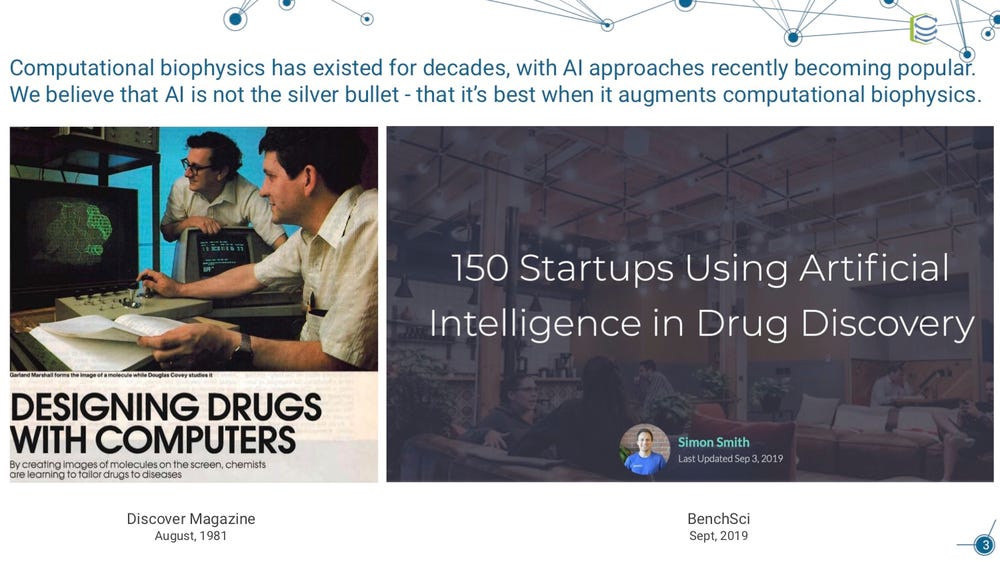 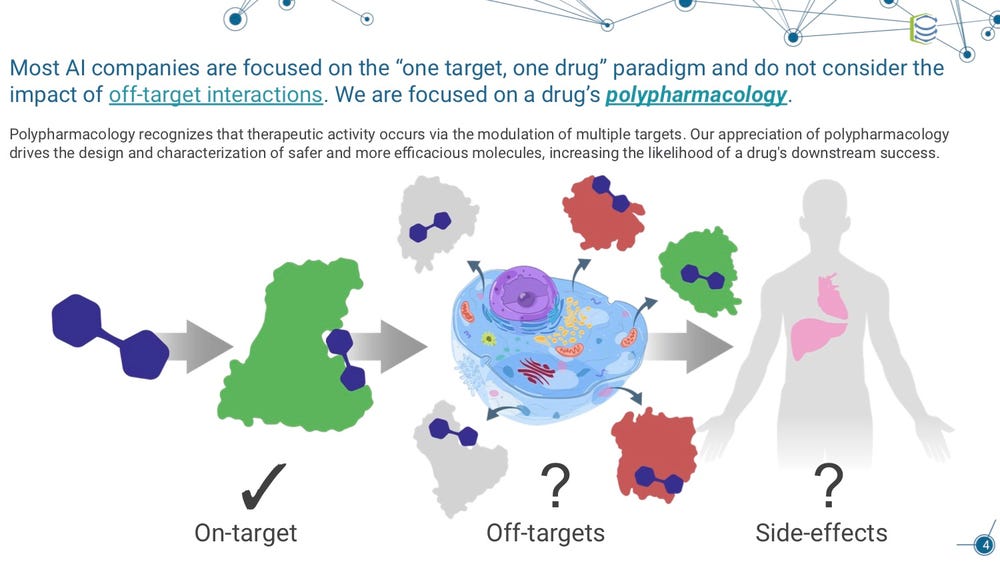 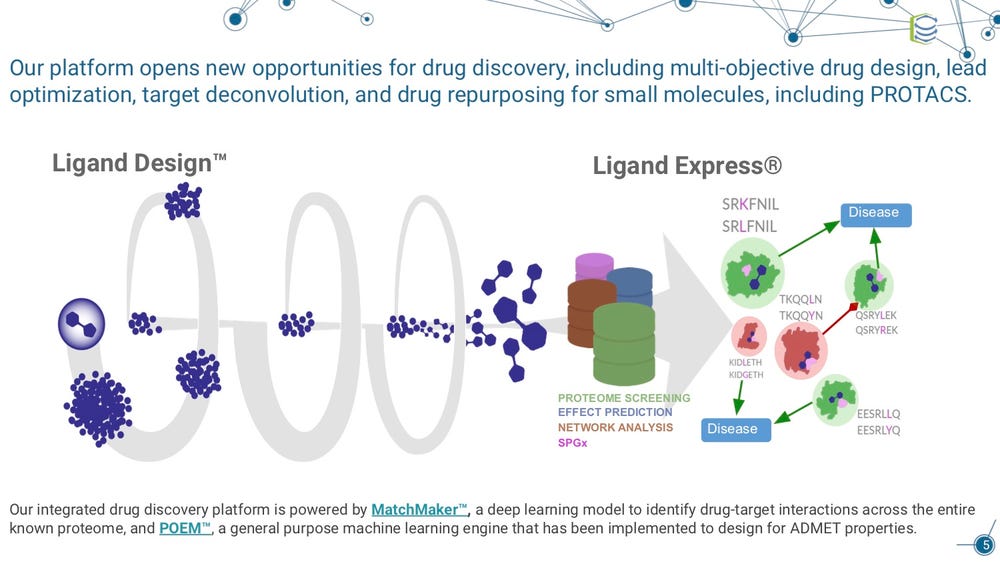 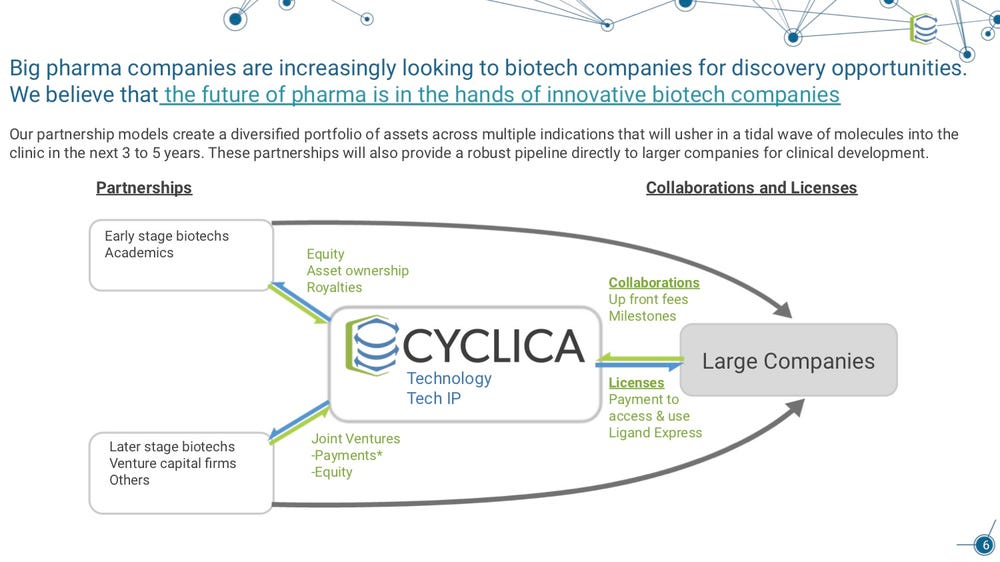 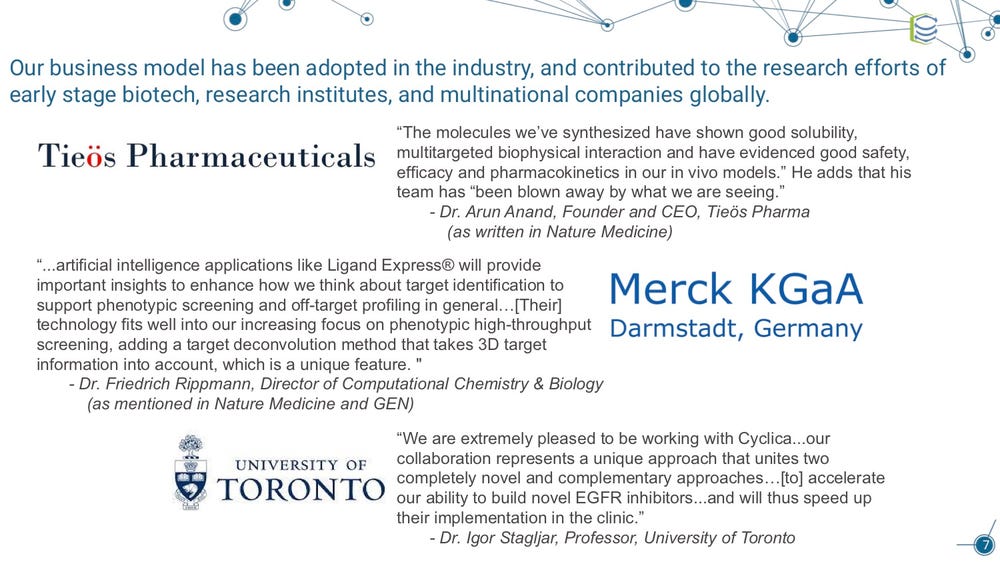 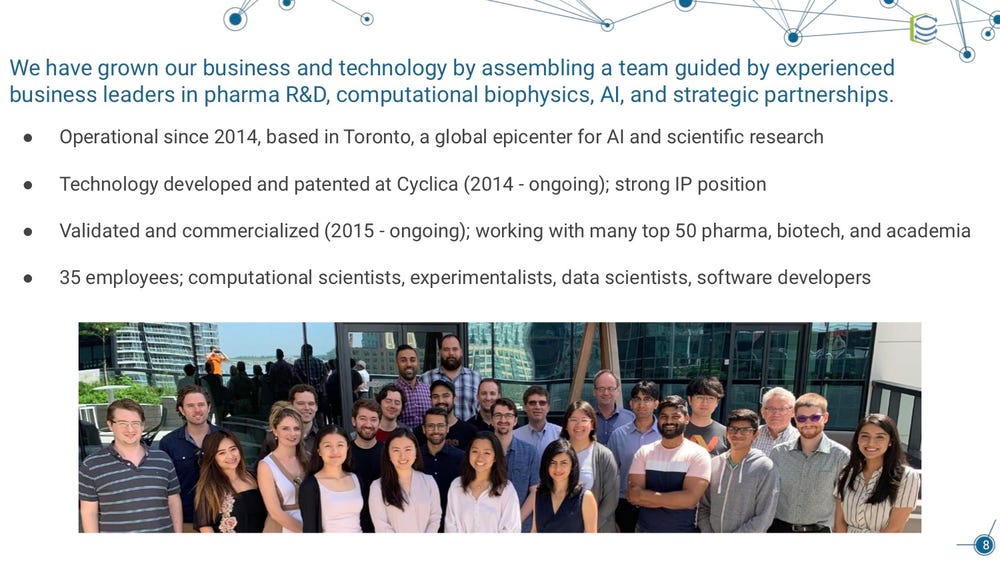 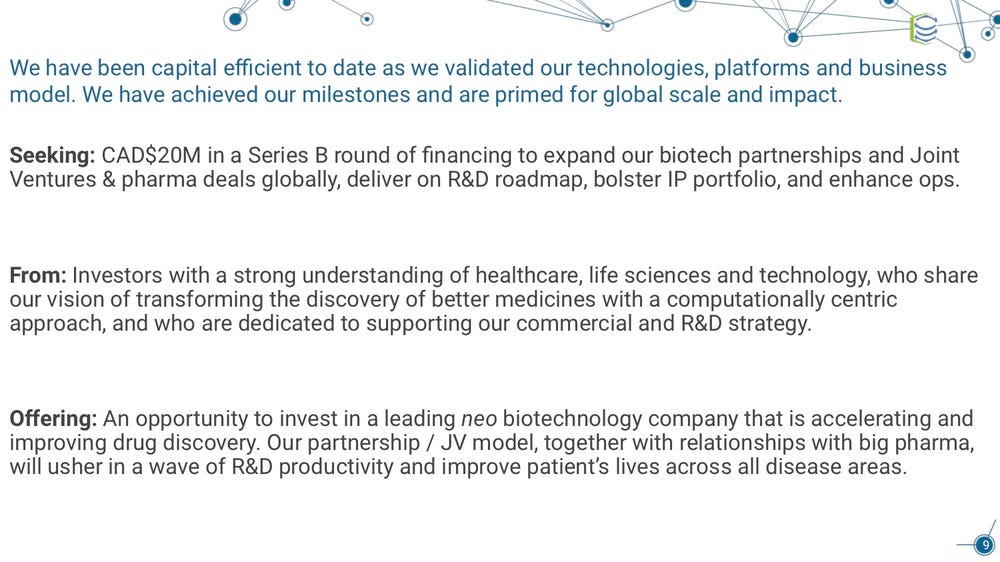 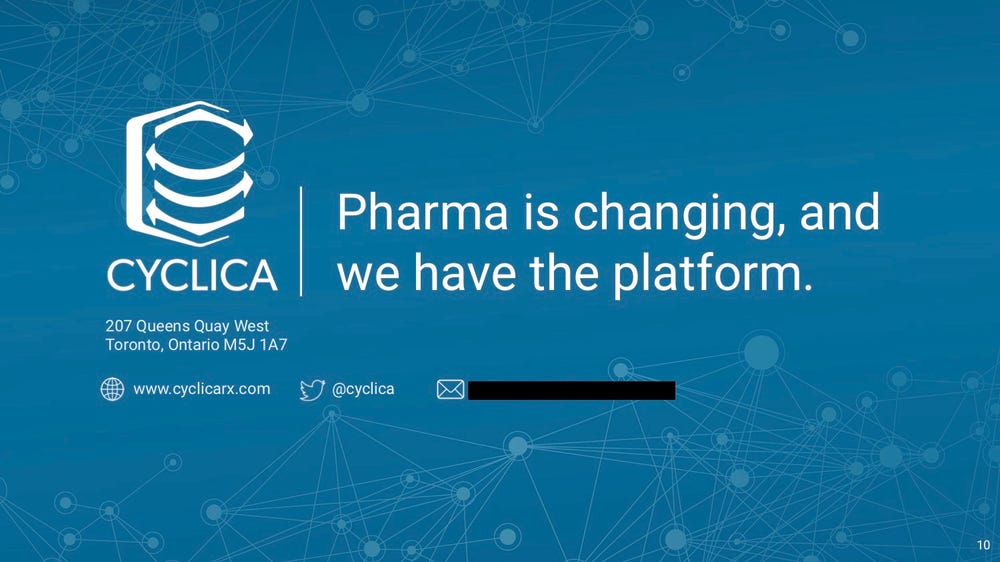