Uber has struggled to attain the same dominance in the tricky region of the Middle East that it’s built in places like the United States. After a few missteps, Uber took another approach and bought rival Careem in a $3.1 billion deal that closed on Friday.

Those initial oversights by the ride-hailing giant— like taking two years to recognize that most consumers in the area didn’t have credit cards — helped Careem, an upstart ride-hailing company founded by former McKinsey partners, scale up with much success.

In its first seven years, Careem would rack up a market value near $2 billion as it continued to expand to 14 countries throughout the region, including Saudi Arabia, Pakistan, United Arab Emirates, Egypt, and more. Those efforts were fueled in no small part by efforts to map previously undocumented cities and building out complex payments systems that can account for cash fares.

Speaking to Business Insider in February fewer than two months before Uber announced plans to acquire the company in a $3.1 billion deal, CEO Mudassir Sheikha said the region’s emerging economic status and infrastructure would make it difficult for an international giant like Uber to compete on their own without local expertise.

“For a global player to come in a start providing a service to the top 2% to 3% of the population is not difficult, they’re used to the convenience,” he said. “But as soon as you start going down the masses, you require a lot of tailoring.”

But before Careem could become an Uber subsidiary, with the US-based ride-hailing giant coughing up $1.4 billion in cash and $1.7 billion in convertible notes for the company, the small team had to start somewhere.

That same year, Careem would follow on the first raise’s success and raise another followed shortly by another $12.3 million in September from backers including STC Ventures, Iris Capital, and Oqal Angel Investment Network

Based on the company’s value in the sale to Uber, those early investors have seen roughly a 100x return on their original investment.

“Today marks the beginning of a new chapter for Careem,” Sheikha said in a press release. “The journey that we started almost a decade ago to simplify the lives of people in the greater Middle East is far from over. Joining forces with Uber accelerates that journey as we become the region’s everyday super app. “

Here’s the pitch-deck from those first presentations that began Careem’s journey more than six years ago:

*This post has been updated to more accurately reflect the rise in value attributable Careem’s earliest investors. Shares have gained roughly 100x in value, while the company’s overall valuation has risen even more. 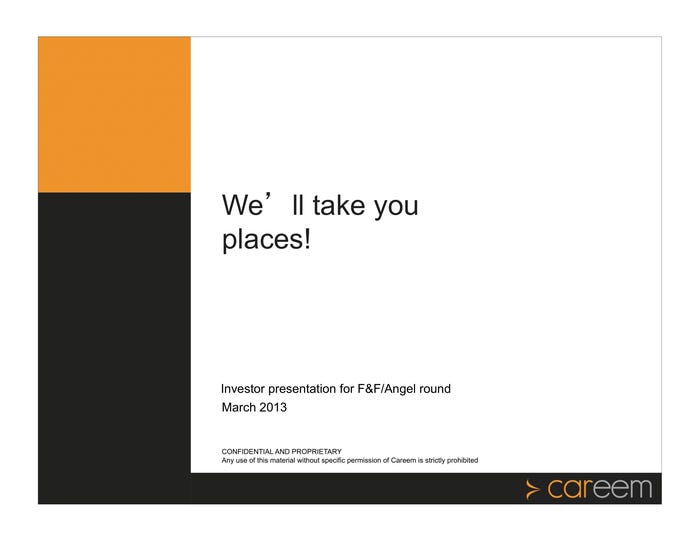 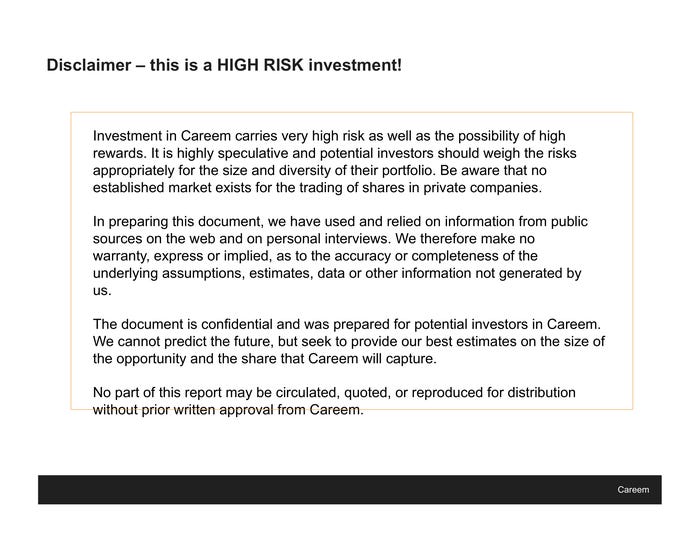 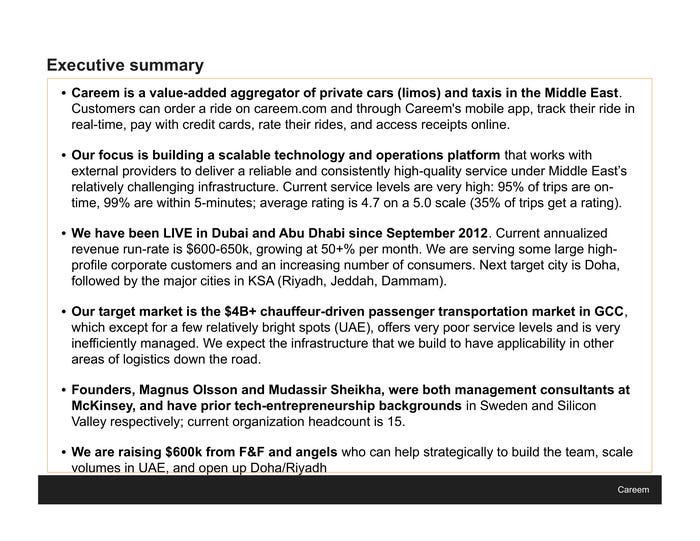 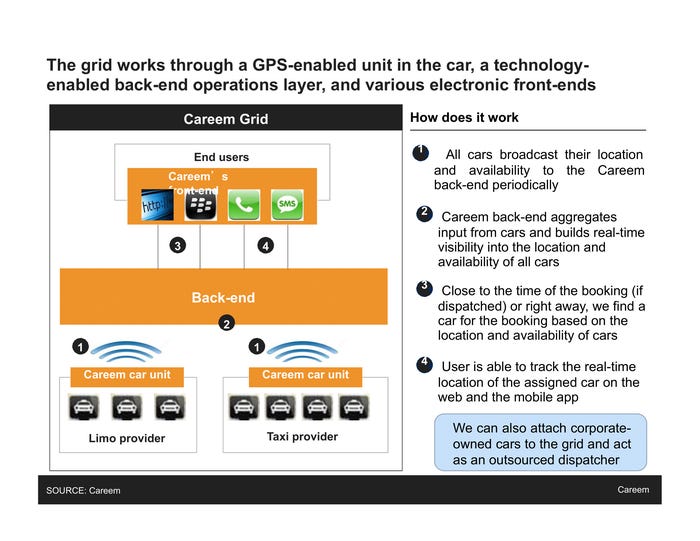 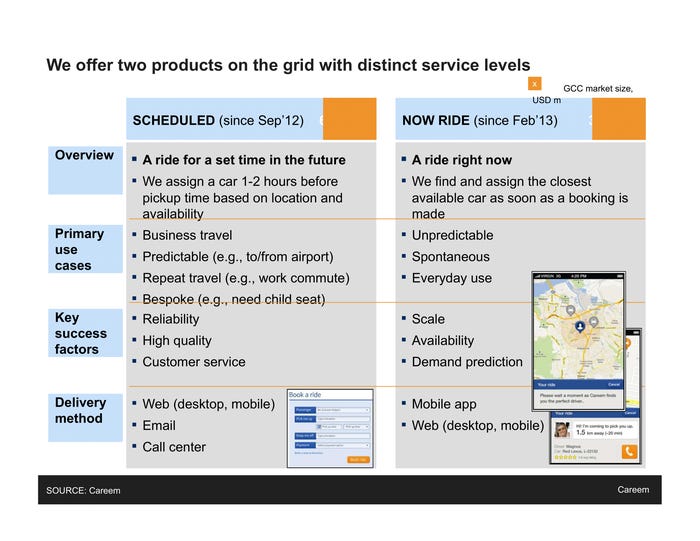 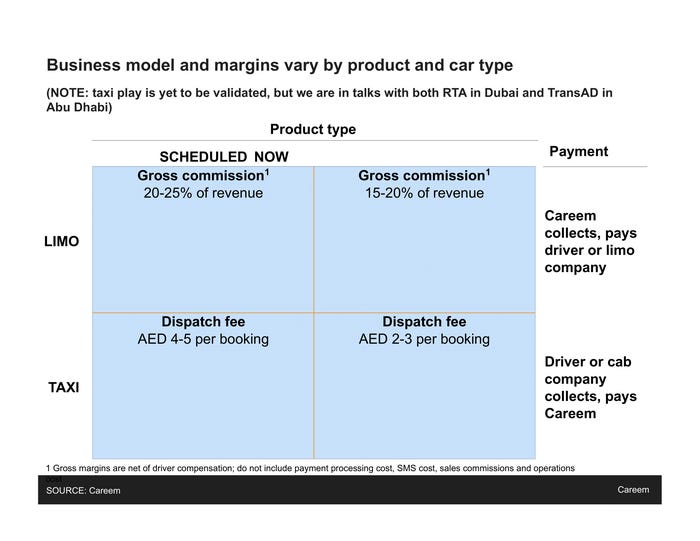 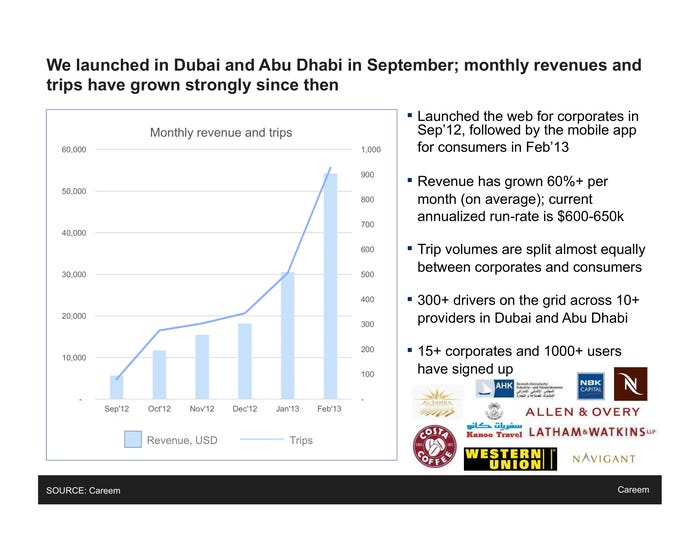 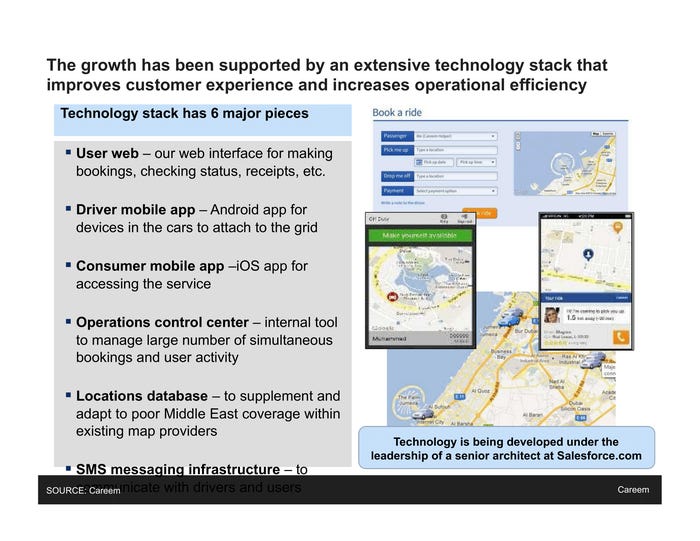 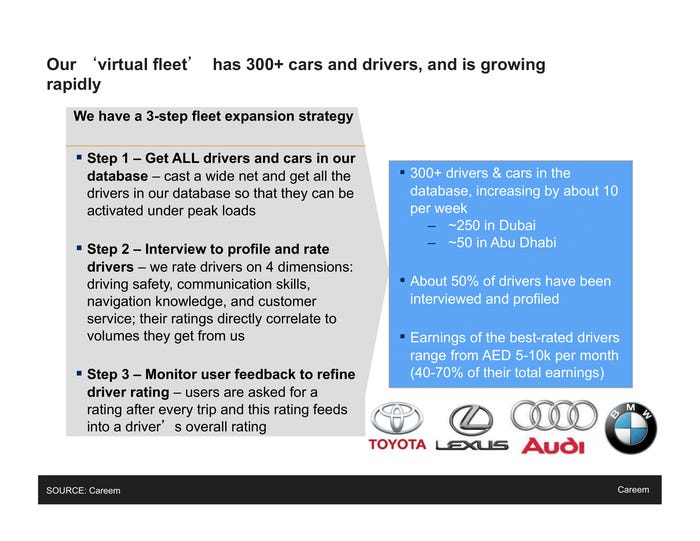 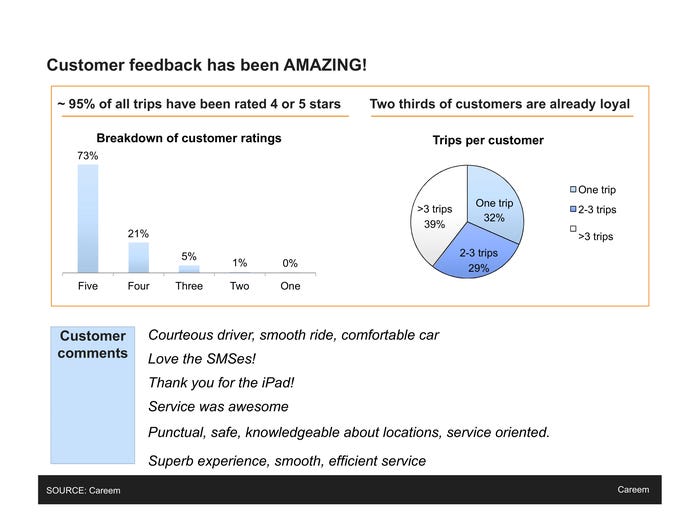 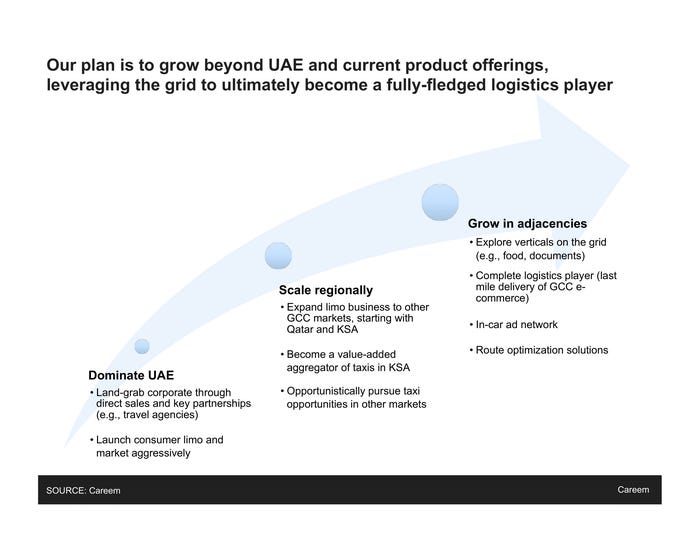 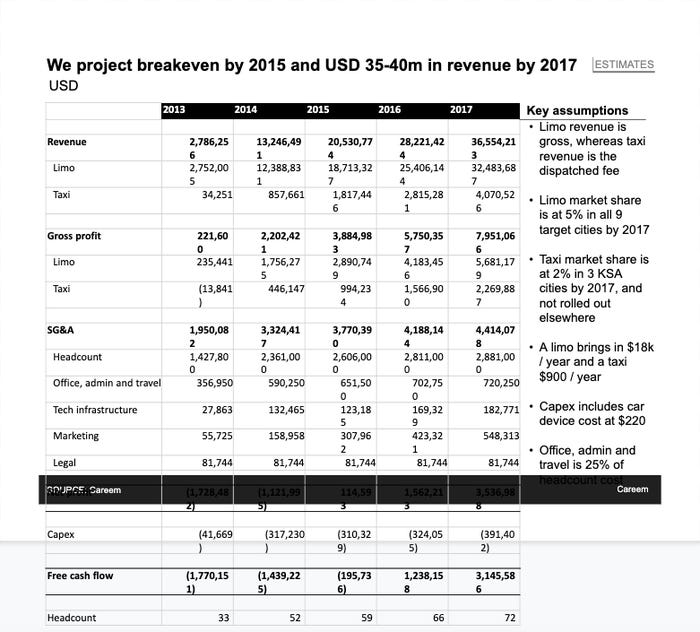 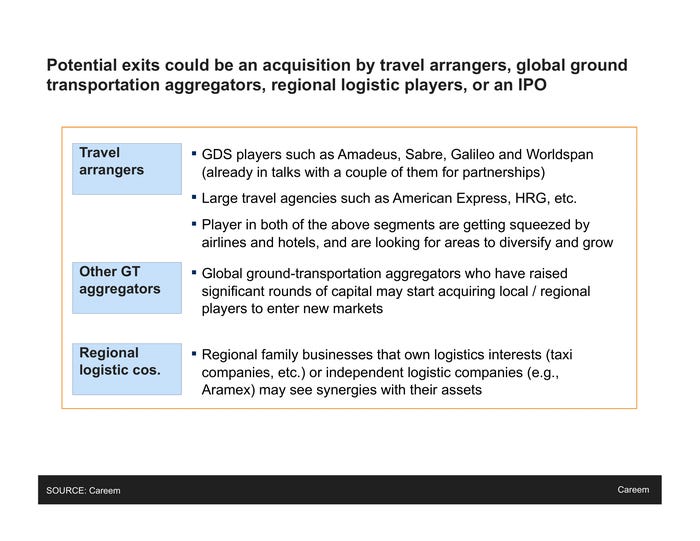 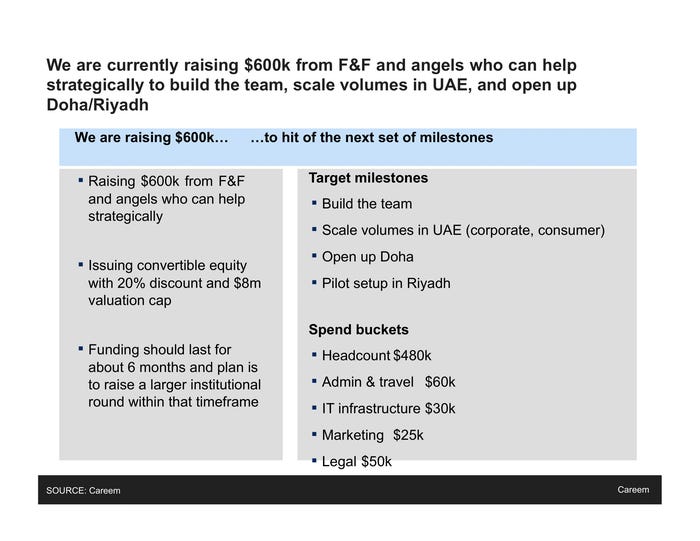 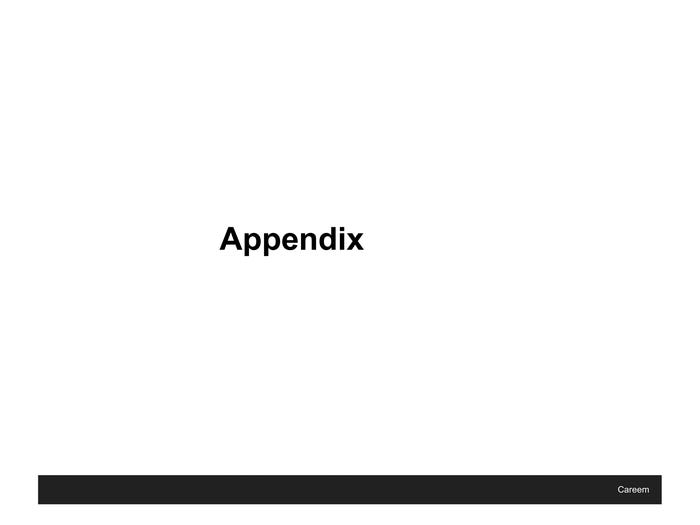 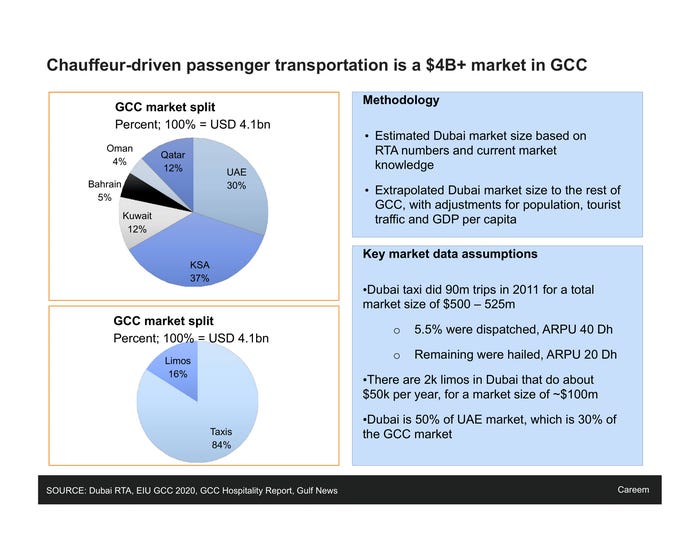 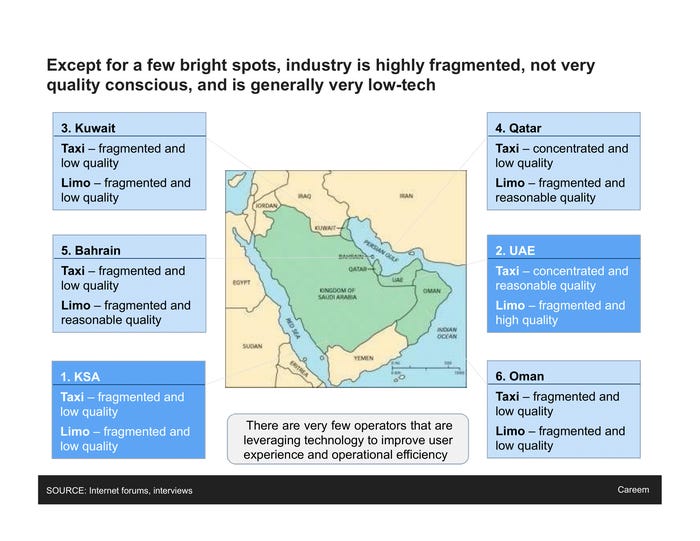 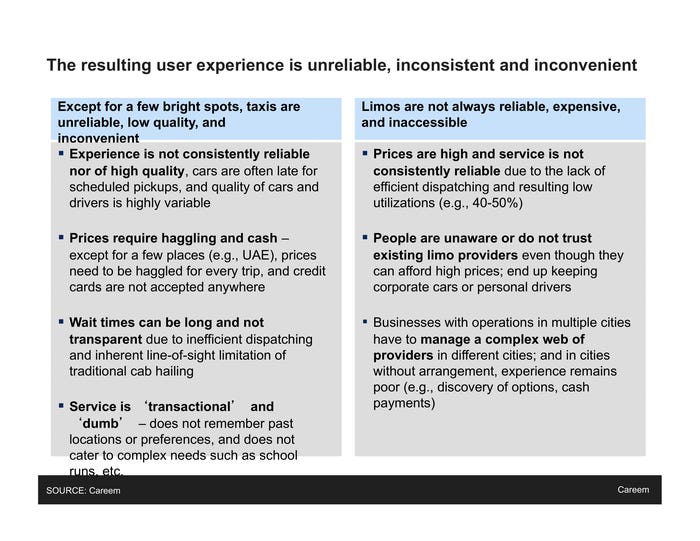 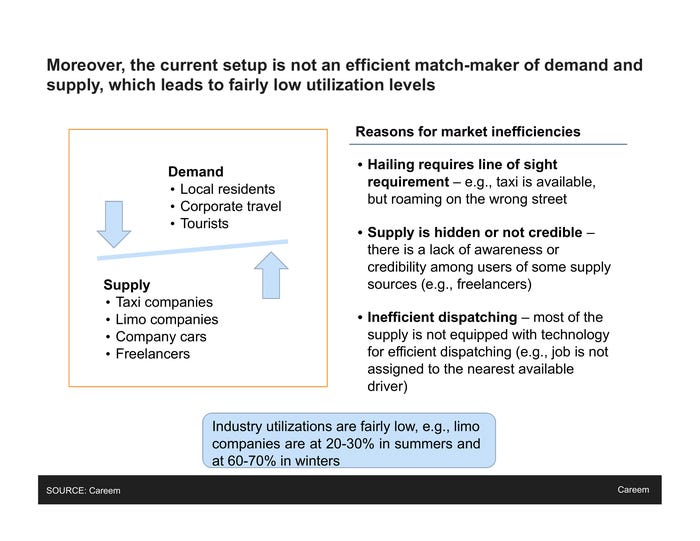 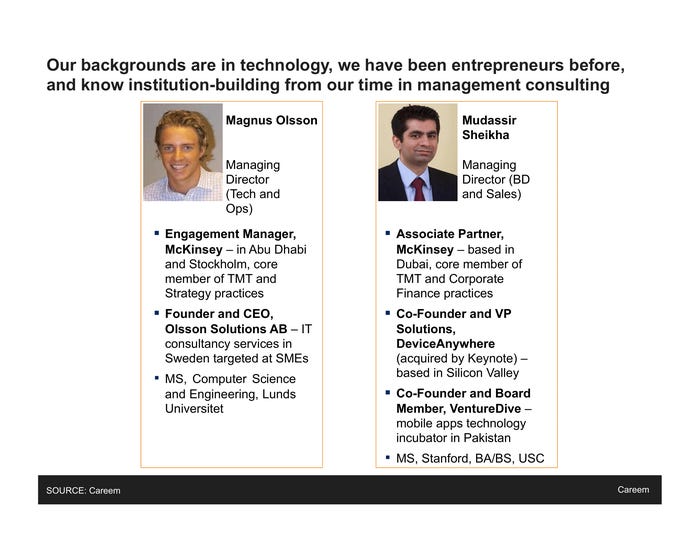