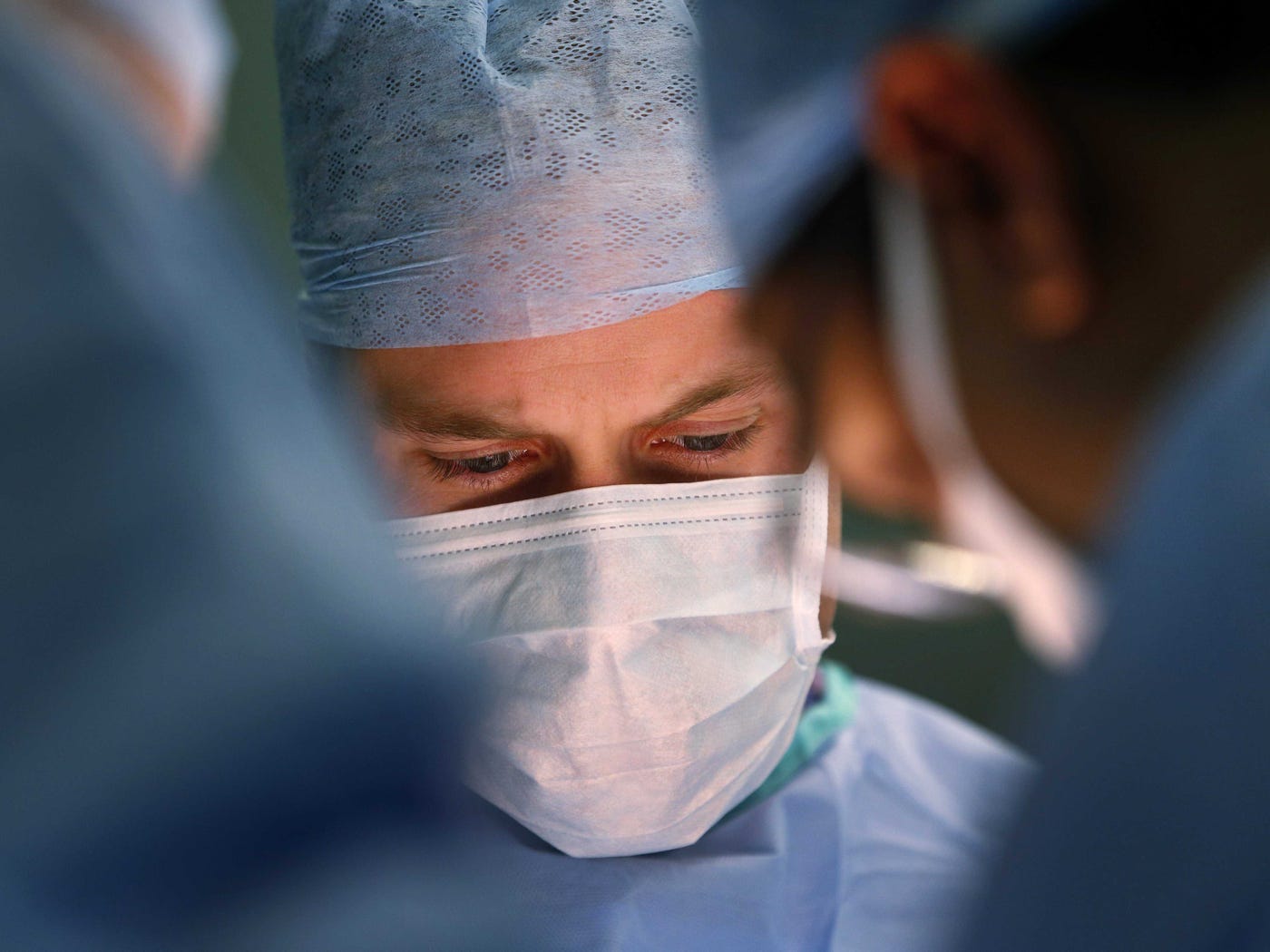 Stanford professor Arnold Milstein came across a figure one day that he took as a call to action.

The statistic was this: 6% of today’s population will account for at least a third of next year’s new, high healthcare costs.

The US notoriously has the highest healthcare costs in the world. Those costs are also rising, something that’s sparked high profile efforts to keep them down, including one recently from Amazon, JPMorgan Chase and Berkshire Hathaway.

Using patient data from Denmark, Milstein and collaborators like fellow Stanford faculty member Nigam Shah devised a statistical model that could better predict who those future high-cost patients would be.

The team partnered with health insurer Premera Blue Cross to try out machine learning algorithms, and the Silicon Valley start-up Cardinal Analytx was born. It spun out of a Stanford accelerator in 2017. Cardinal Analytx uses machine learning models in an effort to control rising healthcare costs for health plans and other firms, and estimates that there’s an about $3 billion market opportunity in play.

It’s like “peeking around the corner, seeing down that long hall, and figuring out what’s going to impact you,” CEO Linda Hand explains.

Hand, who has a background as a technologist, sold her last company to health analytics giant IMS Health in 2012 for an undisclosed amount. After a merger, IMS became health IT giant IQVIA, where Hand worked for many years before joining to lead the Cardinal Analytx team last fall.

Cardinal Analytx is valued at nearly $60 million, according to PitchBook, and has raised nearly $26 million. That includes its recent, $22 million Series B round, which was led by venture capitalist John Doerr.

The startup’s pitch has also proven attractive to customers like health system Sentara’s Optima Health division, which insures about 510,000 individuals in states including Virginia, Ohio, and North Carolina.

Keeping costs down is crucial for health plans like Optima Health.

But its own internal analytics system wasn’t predicting well for everything, said John Coughlin, vice president of informatics and analytics at Optima Health. So he looked to new machine learning technology.

Last year, Optima tested out Cardinal Analytx’s tech by giving the start-up the health plan’s historical data, and asking Cardinal Analytx to predict 2017 figures. Cardinal Analytx “came out with a 52% success rate of who was going to jump in cost,” he said, three times more successful than Optima’s program at the time.

The health plan just signed with Cardinal Analytx as a customer for two of its machine learning products, and will use them to find and reach out to members who are at risk of getting sick or needing expensive procedures, he said.

From one year to the next, Optima spent $259 million more on healthcare for that group of newly high-cost patients, Coughlin said, so doing a better job of keeping those patients healthy and out of the hospital could save Optima several million dollars a year.

The pitch deck below, which was provided by Cardinal Analytx, takes an in-depth look at the start-up’s technology and business model. The slides were used to raise the Series B.

Top of mind when designing it was showing “proof points” of the business, including how it works and what the impact is, Hand said.

“An investor is looking at: what is the distance you have to go, and then do you have enough lift to come off the runway,” Hand said. “You have to make that believable.”

A last-minute pitch deck revamp over the holidays

Going into fall of last year, it was crunch time for Cardinal Analytx’s pitch deck.

With the JPMorgan healthcare conference, sometimes called the “Super Bowl of healthcare,” approaching, and plans to do serious pitching during meetings there, the team was hard at work refining the slides.

One late December meeting with a well-known healthcare investor changed everything. A friend of the board of directors, the investor gave Hand and Cardinal Analytx’s CFO scathing feedback about the deck.

“Oh my god, that was rough,” a board member who had been on the phone said afterwards, Hand recalled.

It was also “exceptional feedback,” much of it focused on how the company could make its points faster or more effectively, she said.

That spurred a gut renovation of the deck around the winter holidays, shaping what the team took into those JPMorgan meetings.

Read more: We got a look at the pitch decks that buzzy $40 million startup HealthJoy used to snag early investors and then execute a huge strategic shift

The original deck had focused on the credentials of the team and its partners, but based on the feedback, audiences wouldn’t want to wait for “the what you do and why you do it and how,” Hand said.

“Not that the people and our beginnings aren’t important, it’s just where you speak about that,” she told Business Insider. 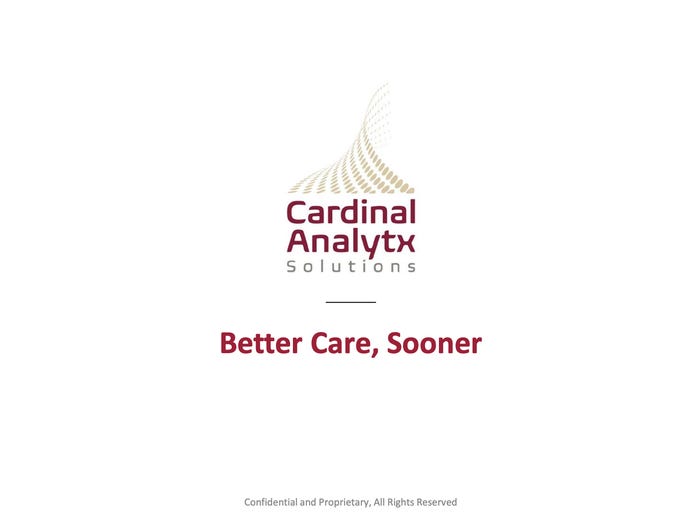 "While we don't provide care, we come at that by predicting future risk and rising costs," CEO Hand explains. 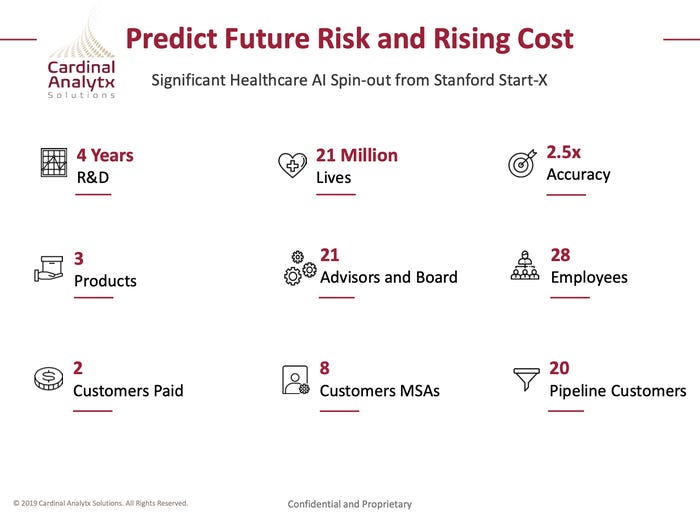 The start-up then goes into statistics about where it is today.

This slide was added as part of the overhaul done starting late last year. The startup was founded by two Stanford researchers, Arnie Milstein and Nigam Shah, four years ago. Its machine learning algorithms were trained on data about claims, prescriptions, and patient engagement for 21 million people across seven years. The start-up then partnered with Premera Blue Cross to see if the algorithms were accurate and applicable, and compared them to other solutions on the market. When Hand joined in September, the now 28-person team honed all that work down to three distinct product lines. 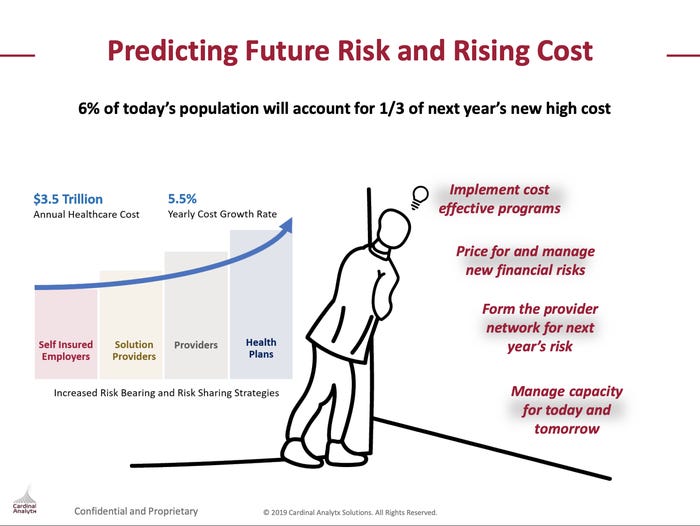 The third slide cites the statistic that started it all and the very premise of Cardinal Analytx. That 6% of today's population is "not on anybody's radar, and often in a blind spot," Hand says, adding, "we want to get way ahead of the curve."

Cardinal Analytx has been focused on customers like health plans, which are big bearers of financial risk around rising healthcare costs. But as the graph shows, the start-up also sees health systems and other healthcare providers as potential customers, because more players within the industry are taking on new types of financial risk. The startup is in different stages of conversations with organizations in each group testing that out, according to Hand. 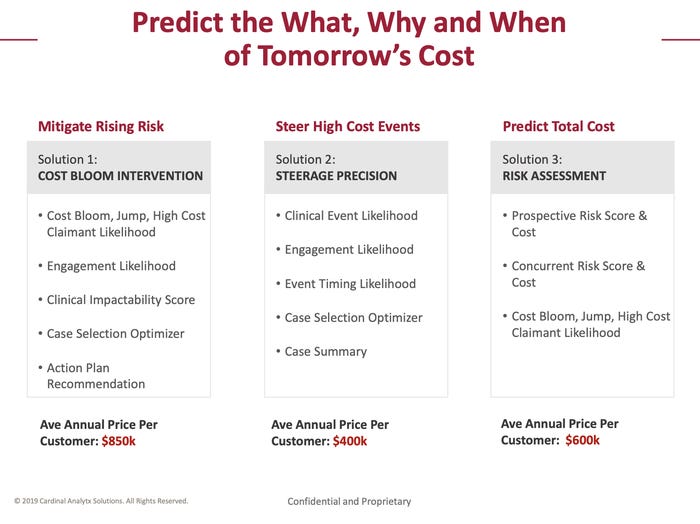 The next slide launches into Cardinal Analytx's approach to rising healthcare costs. It offers three solutions to customers, at varying price points.

Each product is intended for different needs. Resources used by health firms to reach out to patients and help manage their care are both scarce and expensive, so the first, "cost bloom," helps firms decide how to allocate and selectively apply those resources. The second, "steering high cost events," looks at procedures like hip or knee replacements that could be coming up for patients. This offering predicts those up to a year out, to see if, for instance, physical therapy is an option, or the procedure can be done at a better, lower-cost surgery center. "Predict total cost," the third option, is intended to better inform a provider's financial risk, by doing risk assessments that can shape negotiations and pricing. The startup outlines the prices of these offerings on the slide. It removed certain other financial details from the pitch deck provided to Business Insider, including a slide of revenue projections and its customer pipeline. 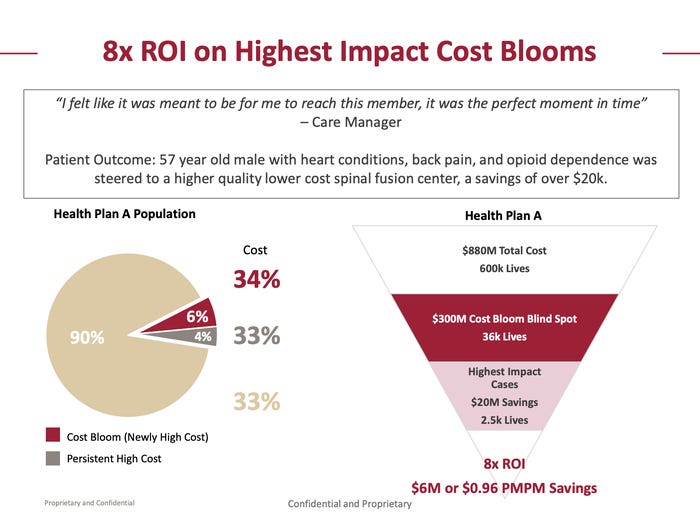 The start-up then takes potential investors through how its "cost bloom" offering might work in practice, giving a patient outcome as an example.

The data on the slide is based on a customer that Cardinal Analytx works with. The funnel represents a process of prioritization that happens once a customer uses the start-up's technology. For instance, some companies' "care management" programs, which reach out to patients with the goal of getting them better, less expensive care, can't handle high-risk pregnancy, or cancer. A customer "can't handle everything, and not everything is going to be impactable, and not everything you can get in front of," Hand explains. 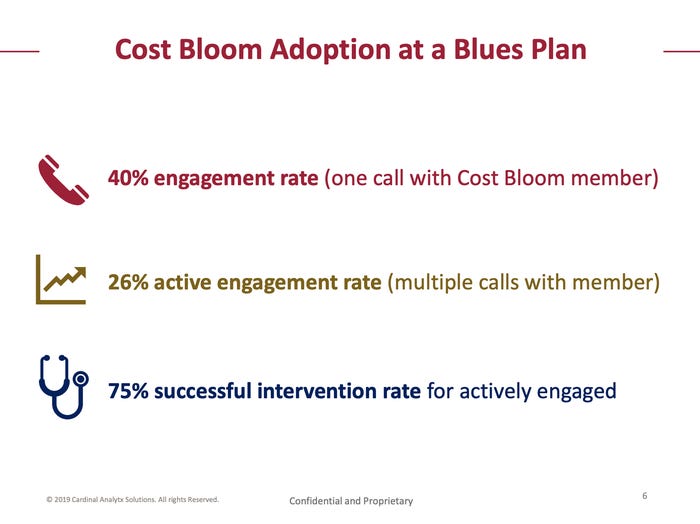 This slide shows how one customer's engagement rate rose from about 12% to 40%, according to Hand. Of those who were engaged by the health plan, three-quarters took a call or calls and accepted a recommended health intervention. 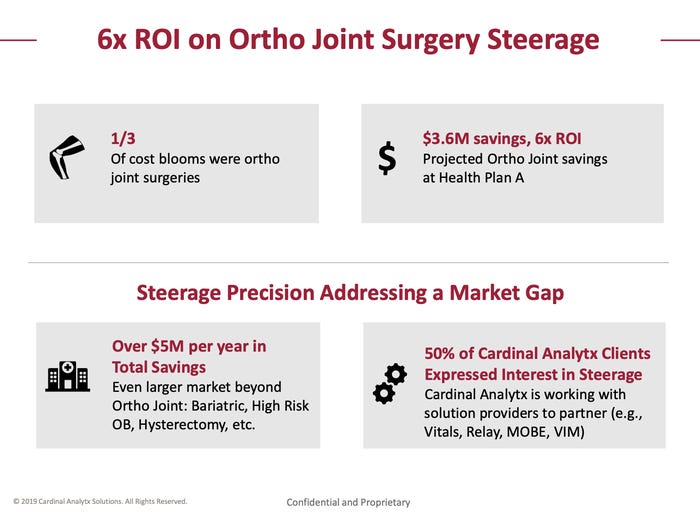 This slide refers to joint replacement surgeries, showing how they can lead to rising costs and getting ahead of them can bring in big savings for health plans. 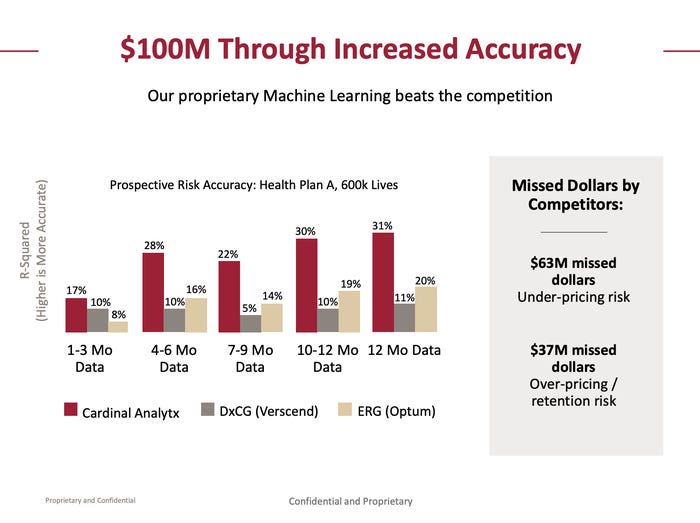 Here, Cardinal Analytx refers to its third product offering, showing data from a comparison made by a health plan to other programs that are also used by actuaries for functions liking pricing their commercial business. Rivals in this space include UnitedHealth Group's Optum and the firm Verscend, now called Cotiviti. 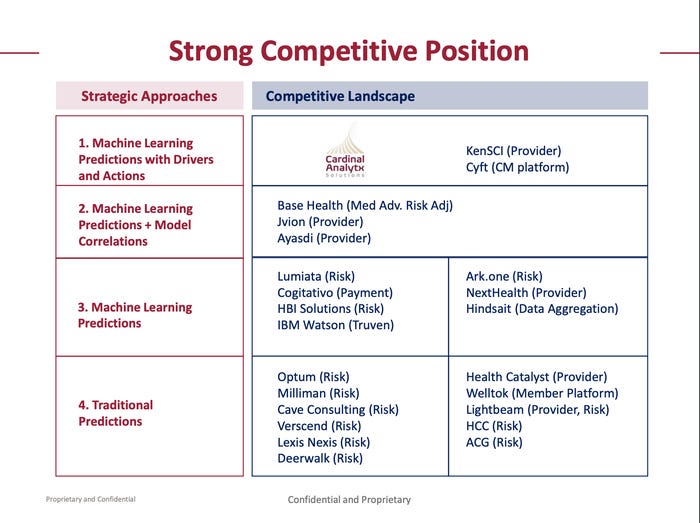 In this slide, the start-up describes its competitive landscape. Cardinal Analytx believes that no rivals are directly competing with all its offerings, but each of its offerings have competition, including from some big companies. "But also these players may be potential acquirers down the road," Hand noted. 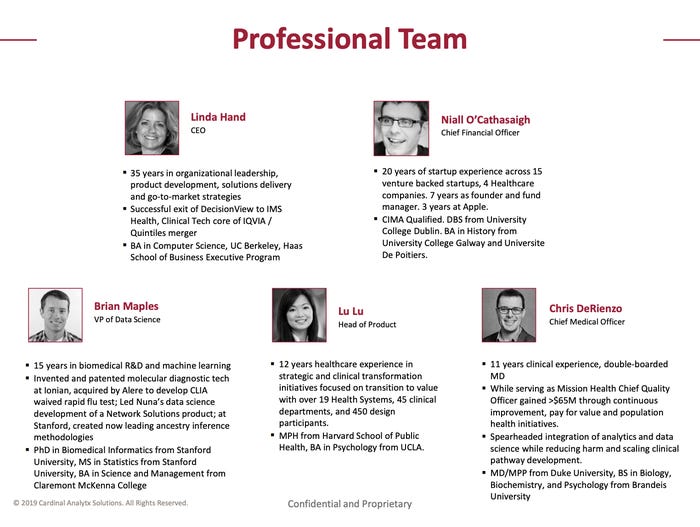 Towards the end of the deck, the start-up details its team and their experience. 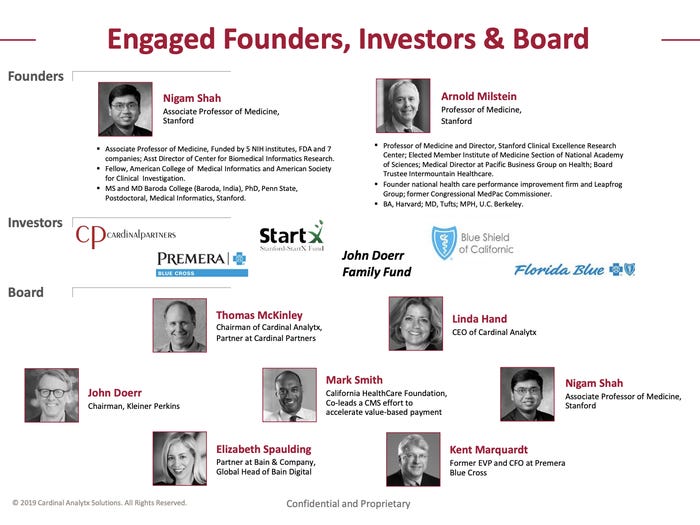 The company then points to its two Stanford founders and board members like John Doerr and Bain's Elizabeth Spaulding. 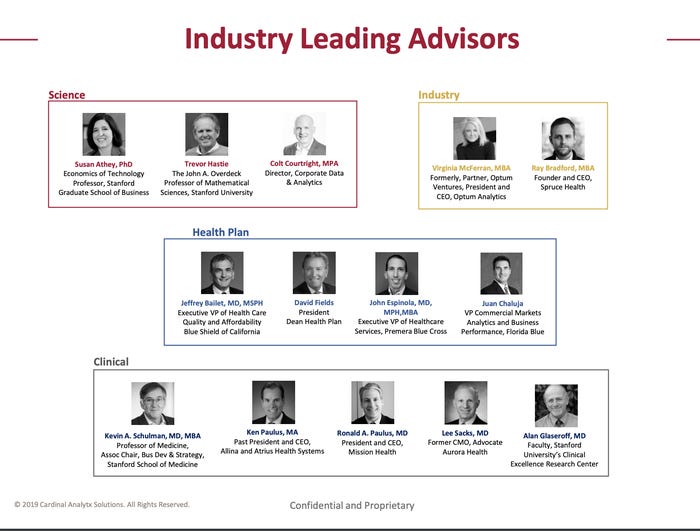 It touts advisors with expertise in science, industry, health plans and medicine. 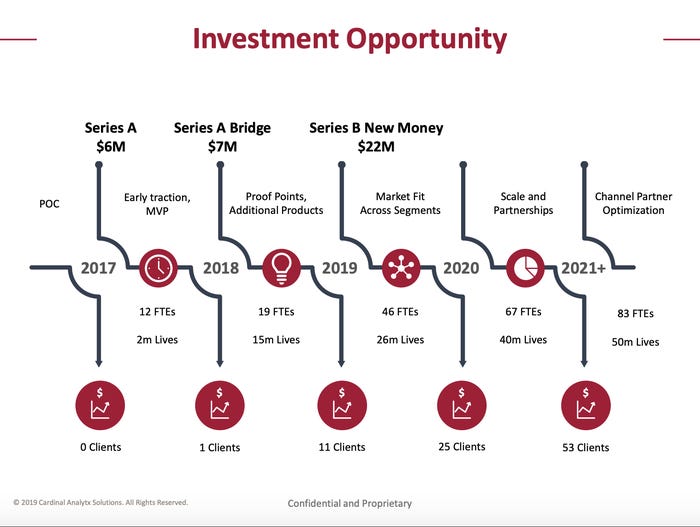 The deck ends by pointing to the investment opportunity on the table, and draws a timeline going to 2021 and beyond.