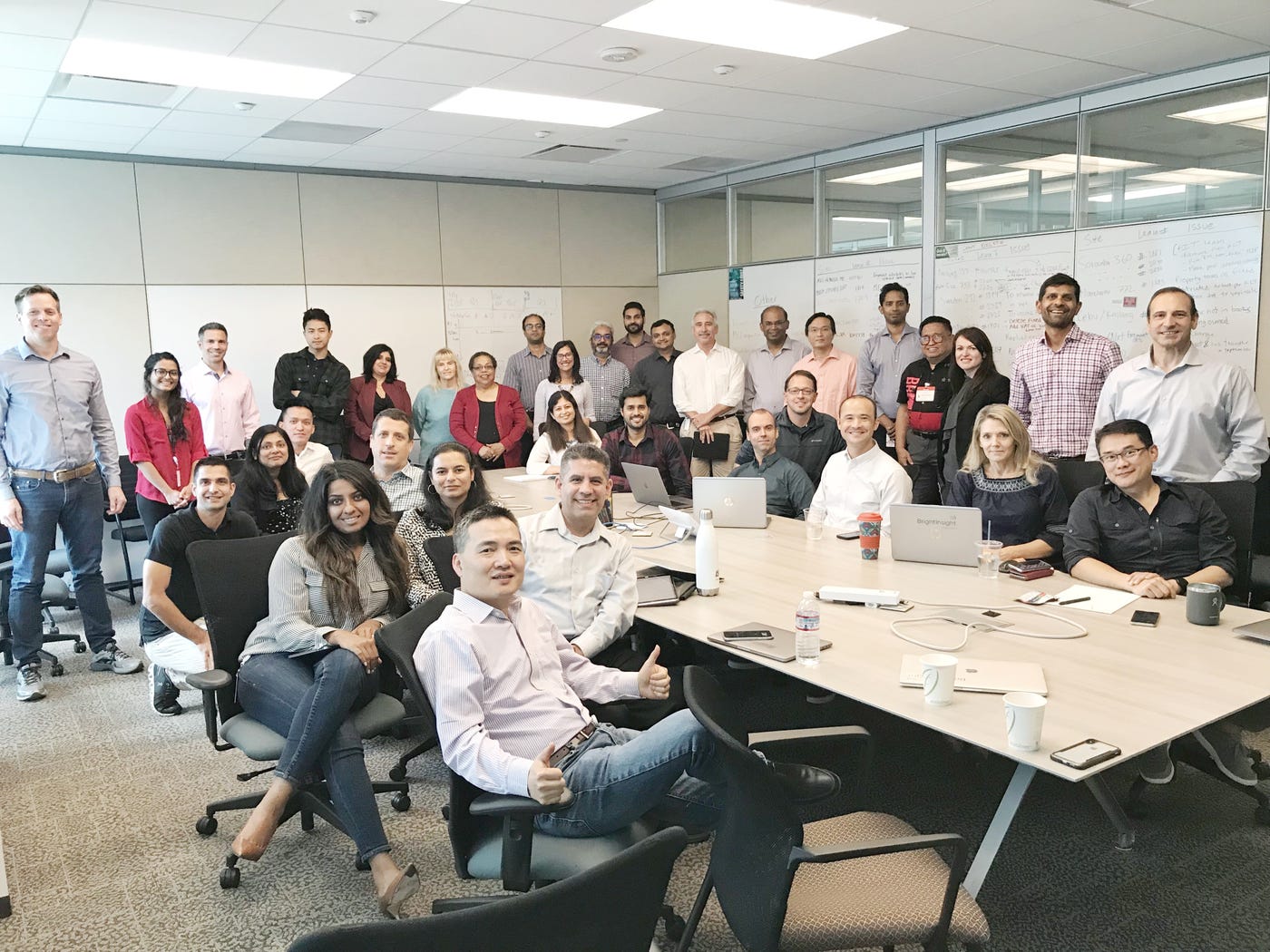 Healthcare company BrightInsight just raised $40 million as it builds out a host of digital tools that help drugmakers get experimental treatments and devices through research and over the finish line.

The Series B round was led by venture capital firm Insight Partners with participation from repeat investors New Leaf Venture Partners and Eclipse Ventures. It brings BrightInsight’s total funding to $65 million, according to the company.

Read more: ‘Virtual’ drug research is becoming a permanent reality as the coronavirus upends clinical trials and fuels a new breed of startups.

The coronavirus pandemic forced hundreds of trials to pause, because it became difficult for patients to show up to hospitals or clinics. Now, pharma and biotech companies are increasingly running them out of people’s homes instead of the traditional venues, Business Insider has reported.

BrightInsight is releasing a new offering designed for that kind of “virtual” research, and the company more broadly acts as a kind of technological host for drug, device, or even software development, CEO and cofounder Dr. Kal Patel told BI. He said it’s similar to how Amazon Web Services is home to Netflix’s databases and videos.

The platform is being used in oncology, obesity, neurology, ophthalmology, diabetes, and other conditions, according to the cofounder. It’s picked up partnerships with AstraZeneca and CSL Behring since coronavirus started, the company said in a statement. Roche and Novo Nordisk were already partners.

“I think we’re seeing a clear tailwind for digital health because people are seeing the value and frankly the need for this,” Patel said. “It’s going from kind of a nice-to-have to being like, gosh, it’s actually a must-have.”https://b8543c3cad54916857ae53057916c9f3.safeframe.googlesyndication.com/safeframe/1-0-37/html/container.html

From clinical trials to “commercialization,” or when a product is ready to hit the pharmacy shelves, BrightInsight collects data from people, ensures companies are following the rules of the region in question, and even writes the code for apps to use the product later on, he said.

A company might try to use an algorithm to test doses for a long-acting insulin in a clinical trial, for instance. BrightInsight can connect to the device giving patients instructions, monitor its success in stabilizing patients’ blood sugar, and send the data to providers with help from Google Cloud.

Assuming the algorithm works, the company would help shepherd it through approval by health regulators like the US Food and Drug Administration (FDA) and make it available through mobile apps, Patel said.

When asked whether BrightInsight could be used to speed up trials for coronavirus treatments or vaccines, Patel said he’s talking about that possibility with several companies, but declined to name them. 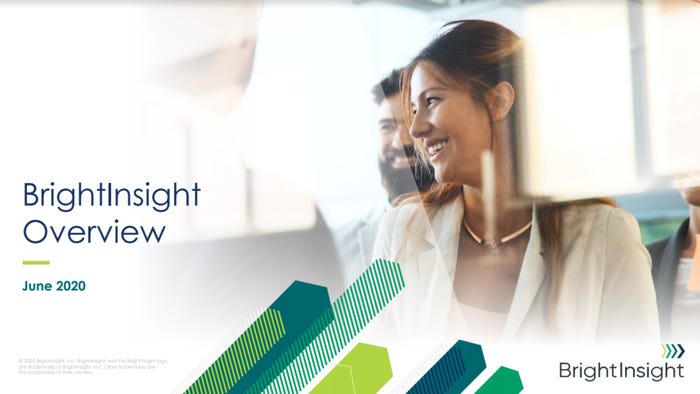 The startup shares some of its history, including the fact that it spun out of Flex, a $5 billion tech and manufacturing company.

Don't confuse the vision for the mission: BrightInsight says the former is to enhance patient outcomes, while the latter is to speed up innovation in digital health. 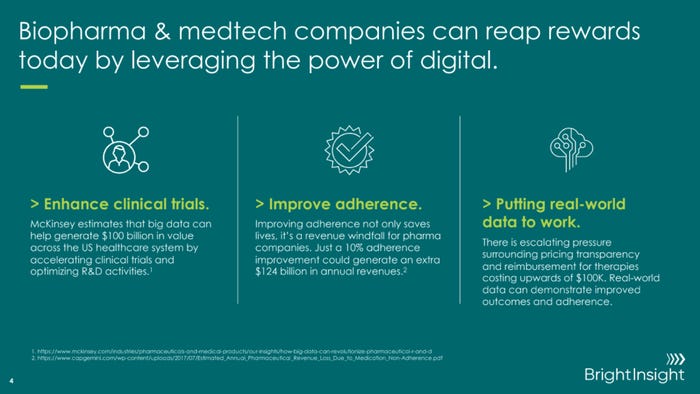 BrightInsight thinks the pharma industry is missing out on billions in revenue by not incorporating data into trials and other research.

Building data platforms and teams that manage each new product in each country for each trial is not worth it, the BrightInsight team argues. 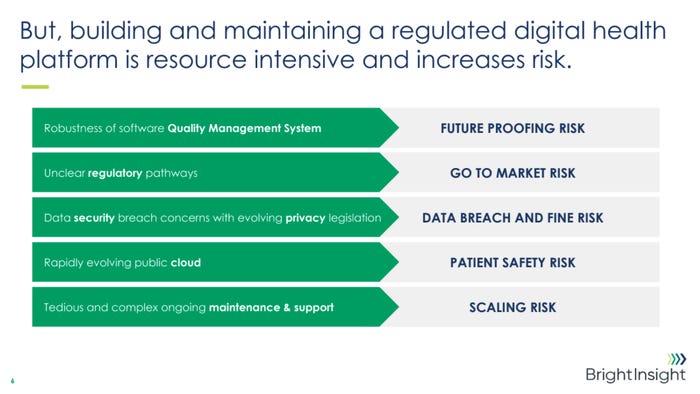 Data breaches are just one risk to participants when companies choose to build their own platforms, BrightInsight told investors. 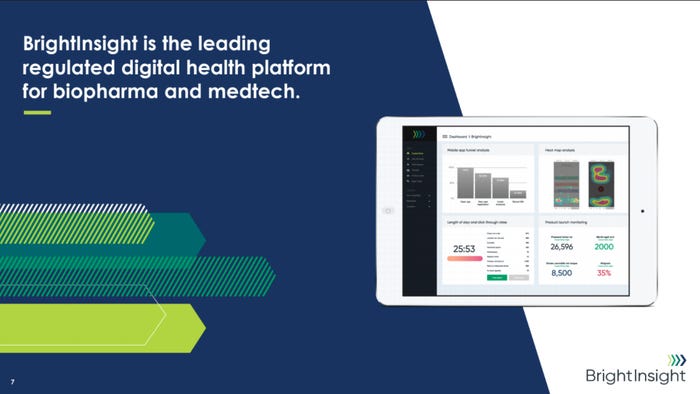 Instead, it offers the BrightInsight platform as a solution. 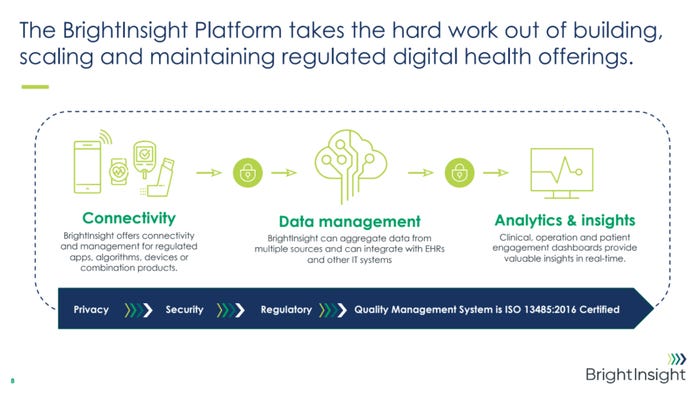 Data from trial participants can flow from the BrightInsight platform onto Google Cloud. The platform also connects with electronic health records, cell phones, and researchers' dashboards.

Getting drugs over the finish line can take 10 years, but BrightInsight says its tech can speed things up. 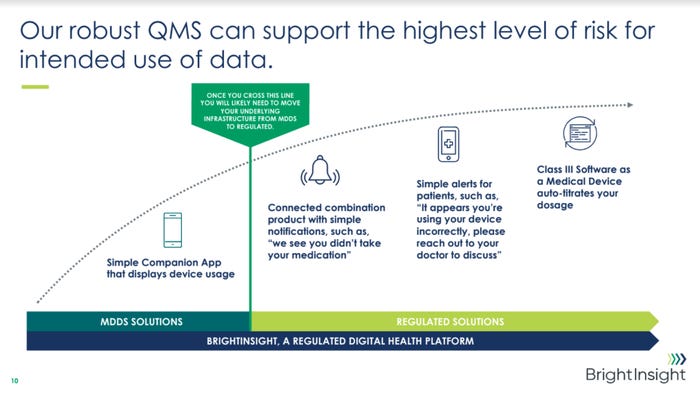 The BrightInsight tech can engage with patients directly, too. One feature can notify them when they're not taking medication during a study. 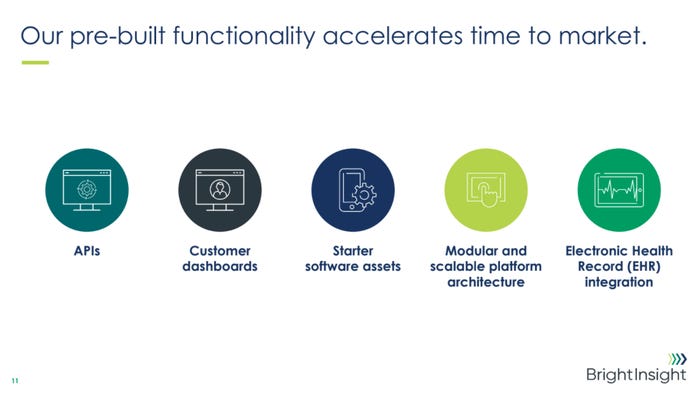 BrightInsight uses healthcare APIs that help it exchange patient data with other sources. 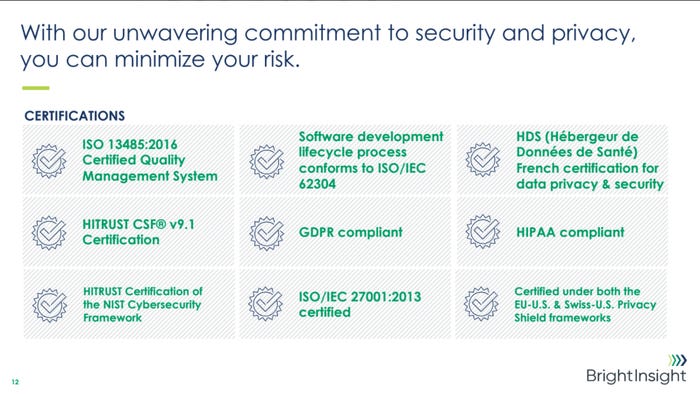 It boasts compliance with health regulators in various countries. 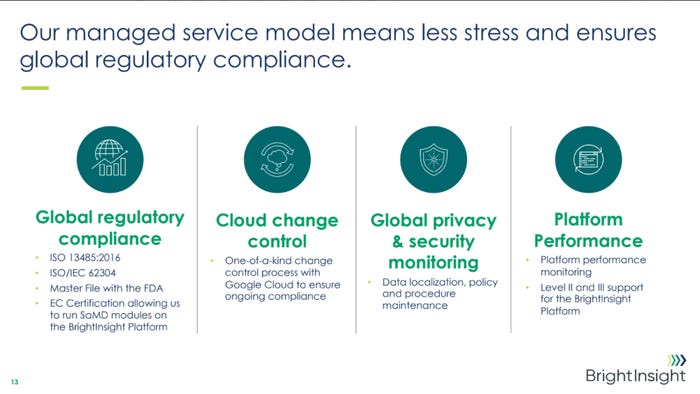 BrightInsight's "managed service model" sees the drugs, devices, apps, or software all the way through commercialization from clinical studies. 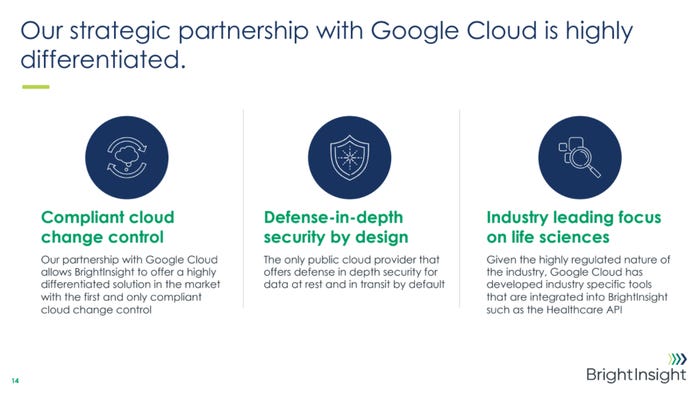 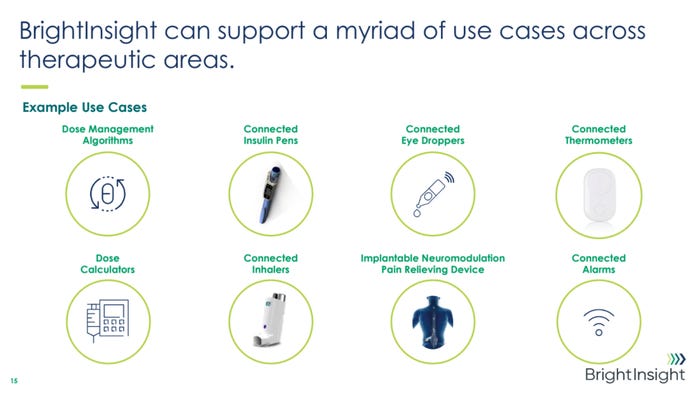 The startup is pretty agnostic when it comes to which devices sponsors employ in their trials. It can collect data from eye droppers, thermometers, and insulin pens. 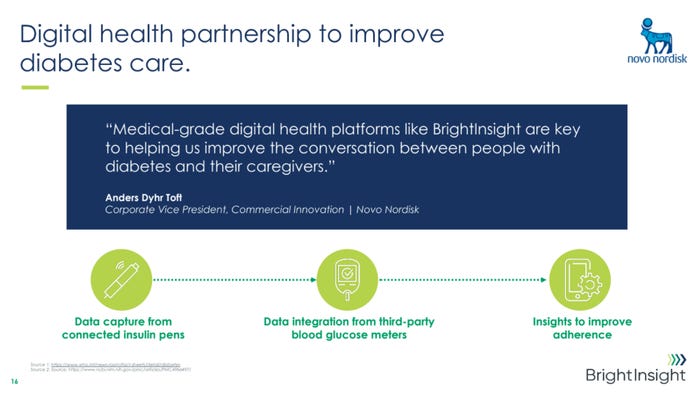 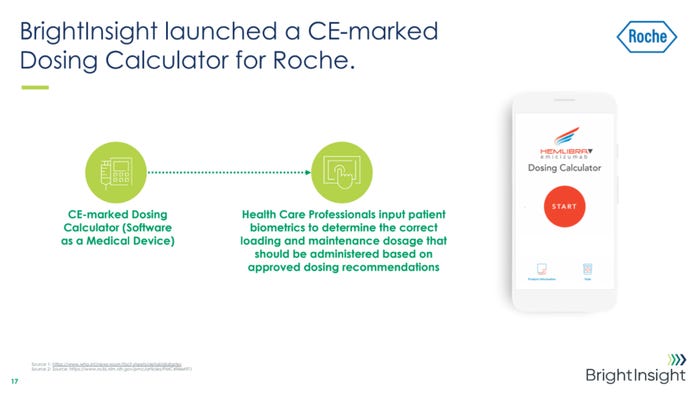 The startup helped healthcare giant Roche launch a calculator that figures out how much medicine patients should take. 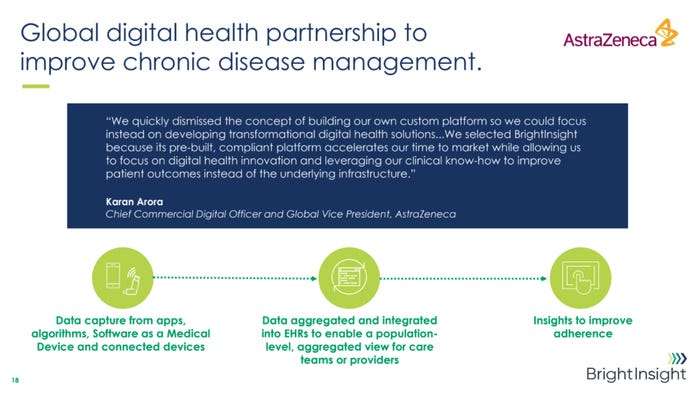 AstraZeneca is using BrightInsight so it can focus on digital health "instead of the underlying infrastructure," according to the company. 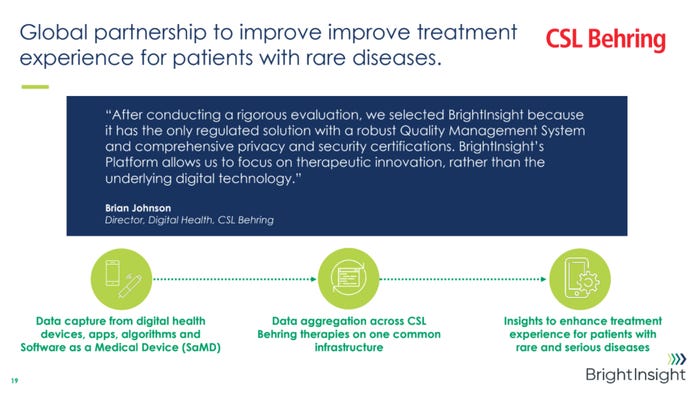 Companies can also use BrightInsight to help patients with rare diseases. 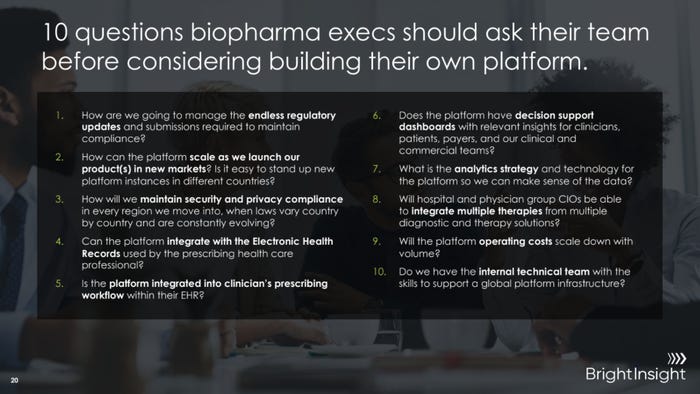 On this slide, BrightInsight execs drive home the point that drugmakers are better off delegating this kind of tech to the company, rather than building it themselves. 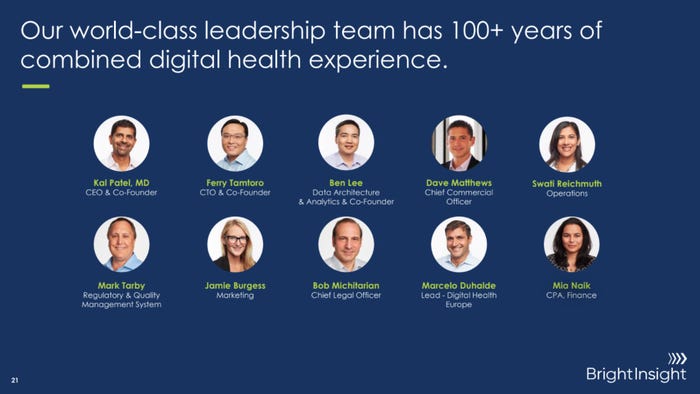 Google Cloud chose BrightInsight as a partner of the year in 2018 and 2019.

Investors in the company include Flex and Insight Partners. 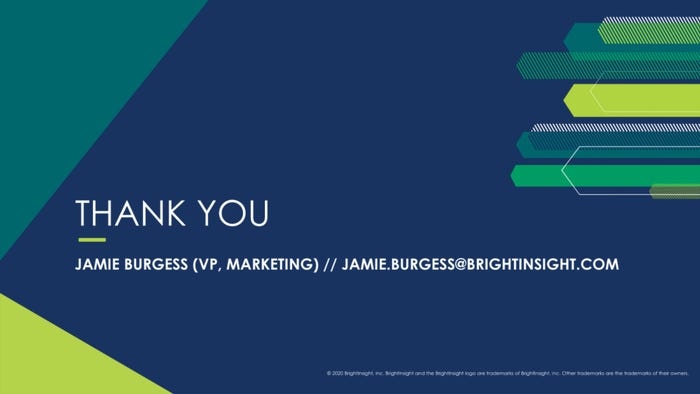 BrightInsight thanks listeners on the final slide.