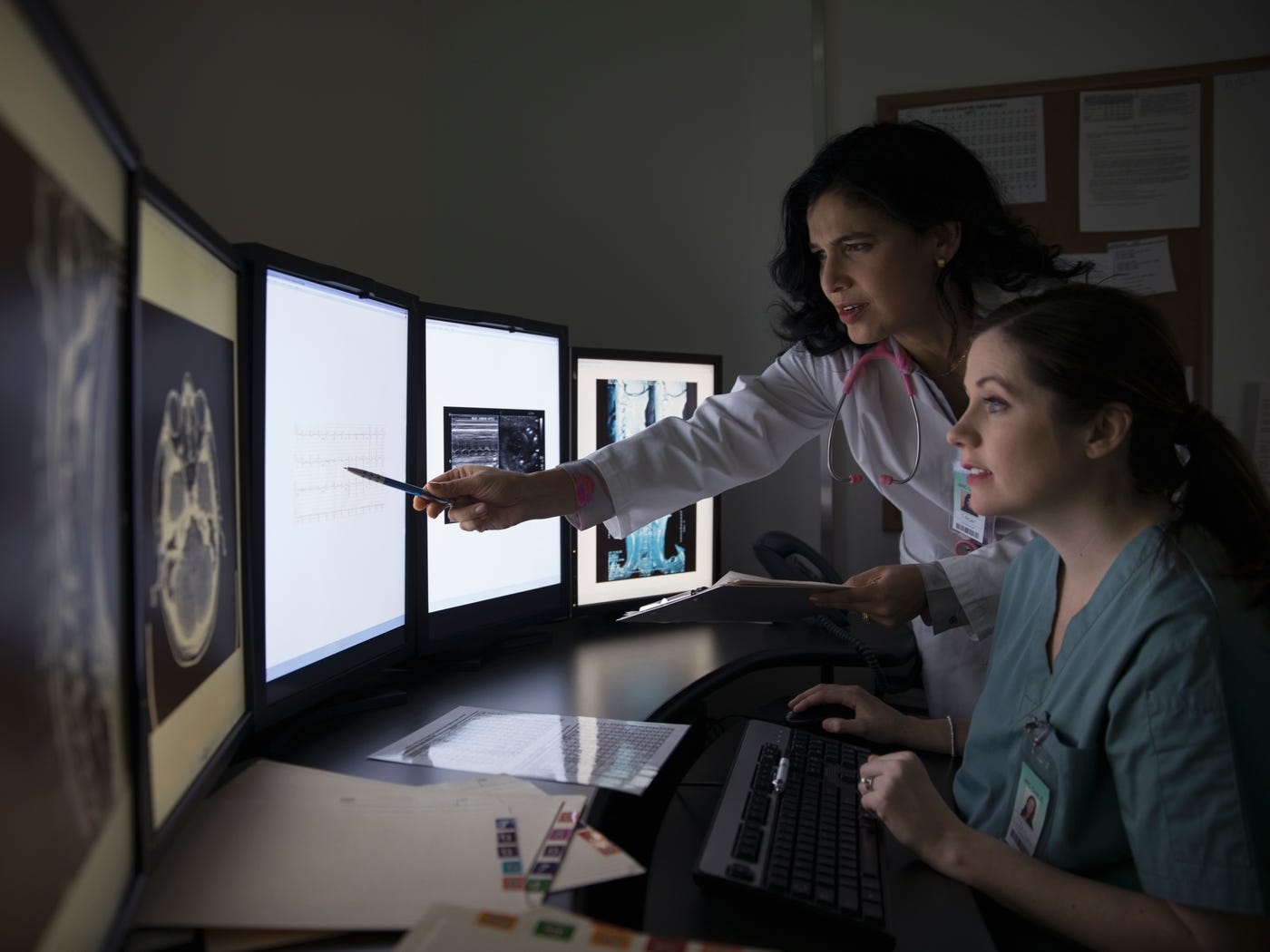 The round opened before the pandemic, but closed at the end of May. In the interim, business boomed for Bright.md. Year-over-year, online visits and new patients grew by 1,200% and 2,000% in April, respectively, according to Ray Costantini, the company’s co-founder and CEO.

Now, visits are already declining — a development Costantini called “a good thing” — but those numbers sat well with potential investors at the time, according to the cofounder.

“Urgency increased,” Costantini told Business Insider. Some investors even wanted to up their contributions retroactively, he said.

When all was said and done, the Portland, Oregon-based company raised $16.7 million, $1.7 million more than it set out to raise. In all, the startup has taken in about $30 million to date. The company declined to disclose its valuation.

Bright.md works differently than some other telehealth companies. Instead of connecting patients with doctors for video visits, its platform SmartExam uses computers and smartphones to automate parts of doctors’ appointments, typically for urgent care and primary care.

The company’s software interviews patients to understand their symptoms, and they’re only given a video or in-person appointments when necessary, according to the company.

Doctors then receive reports, including a transcript of the patient’s interview, and sign off on the platform’s recommendations or choose another course of treatment. Bright.md inputs the data into electronic health records and can take care of referrals, too.

In some ways, Bright.md’s success is a reflection of lockdowns. After coronavirus forced doctors offices to close and people to stay in their homes, companies offering remote care took off. Bright.md itself offers a free tool that helps doctors and hospitals screen patients for coronavirus symptoms.

Telehealth claims in private insurance plans have soared, to 7.5% of claims in March 2020, up from 0.17% in March 2019, according to healthcare data firm FAIR Health. The meteoric rise has caught the eye of venture capital investors, where some top firms are eyeing virtual care’s speedy customer acquisition with enthusiasm.

‘I think telehealth is boring’

But with that renewed interest comes renewed skepticism, too. In the latest round, investors frequently asked Costantini what separates Bright.md from the other telemedicine companies out there, he said.

“Telehealth looks crowded. Why should we care about you?” Costantini said, recounting a common question during pitches.

For starters, Bright.md’s chief executive said he doesn’t like telemedicine companies very much.

“We often get lumped in as a telehealth company because we sell into the telehealth space by design,” Costantini said. “I think telehealth is boring and commoditized.”

Whereas some telehealth firms sell care directly to consumers and often require video appointments, Bright.md prides itself on cutting down on physicians’ wasted time. They only need 2 minutes, according to Costantini, to consult with SmartExam, saving the rest for patients with “complex clinical needs,” he said.

The model makes sense to investor Seven Peaks Ventures because other telemedicine businesses can end up taking away revenue from their customers, according to Corey Schmid, a general partner. In contrast, Bright.md works within health systems to expand their own doctors’ capacity, she said.https://cb3232b9893fc8b98ccb7a9f3365c6fe.safeframe.googlesyndication.com/safeframe/1-0-37/html/container.html

“If a patient calls and says, ‘Hey I have a sinus infection,’ and [providers] have a contract with Teladoc or some other direct-to-consumer, you’re essentially outsourcing that patient to a fleet of doctors that might be in New York or Michigan,” she told Business Insider.

Dr. Krishna Yeshwant, a managing partner at Alphabet’s GV venture fund, said he’s coming around to the simpler model after seeing smaller providers use a startup called Doxy.me, which helps doctors see patients online, in huge numbers over the last couple of months.

Prior to the pandemic, however, he doubted that approach “because to some degree, without those wraparound services, I’ve always felt like telemedicine is a little bit of a commodity,” he told Business Insider.

Read more: 2 investors at Alphabet’s $4.5 billion venture fund share the 3 healthcare companies outside their portfolio that impress them the most.

James Olsen, the founder and managing partner of Concord Health Partners, said there are many early-stage companies that address aspects of a patient’s healthcare encounters, like scheduling, whereas Bright.md’s software can evolve to address a broader set of needs.

Here’s the deck that convinced those investors to bet on Bright.md in the middle of a pandemic. 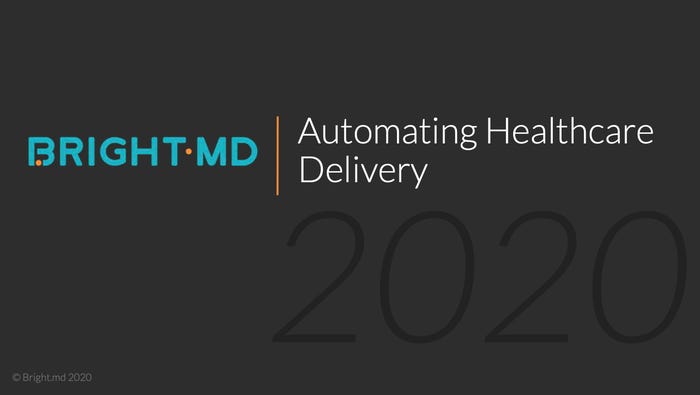 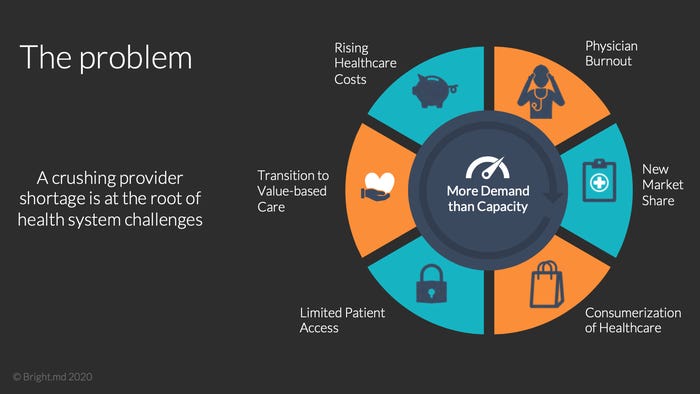 Bright.md wants to ease physician burnout and shortages by expanding how many patients they can see in a day, and by removing some of their administrative roles. 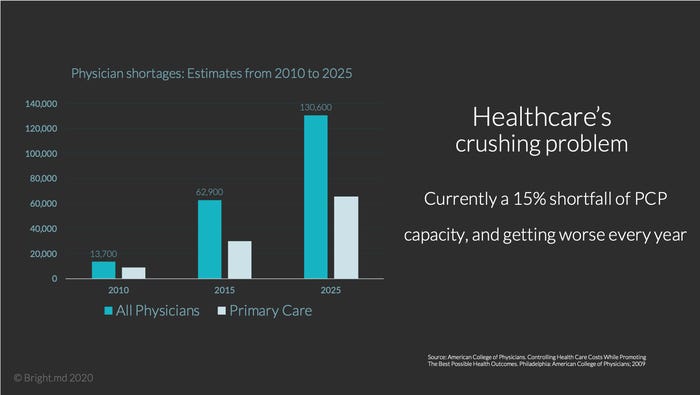 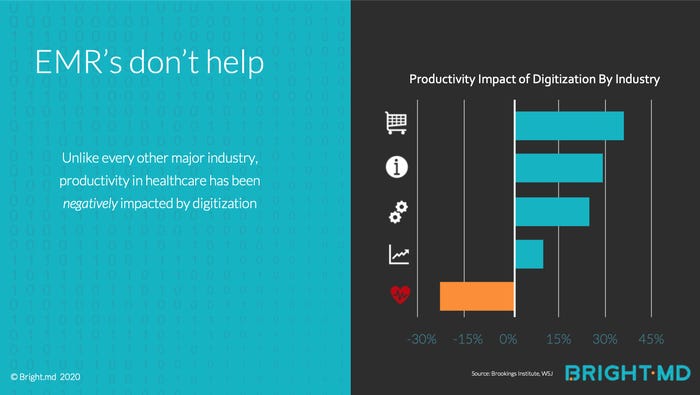 Digitalization hasn't boosted productivity in healthcare, according to Bright.md. That's partially because the technology is around billing and not what providers need most, Costantini told BI.

"Every other industry has seen between a 10 to 30% improvement in efficiency from digitization," Costantini told Business Insider. "With healthcare, we seen a sustained 20% reduction in productivity." 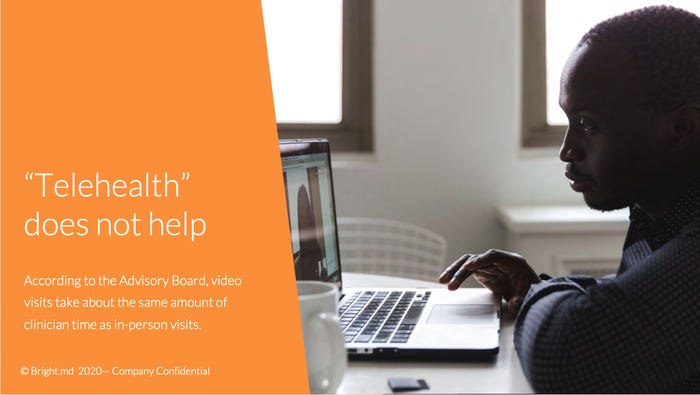 Meanwhile, telehealth visits can take just as long as normal ones. 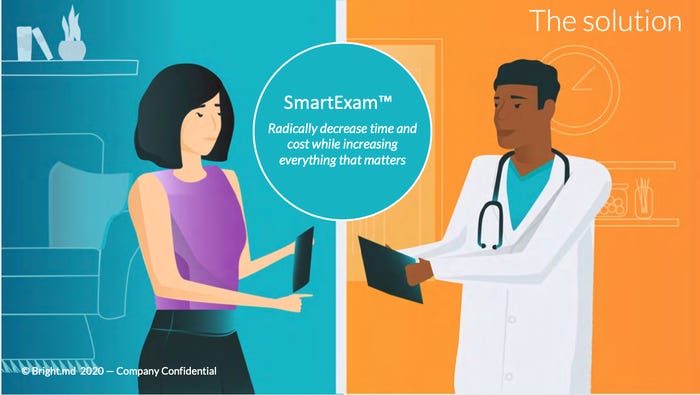 Bright.md's product SmartExam automates patient visits and billing, limiting the time physicians spend on routine medical issues and freeing them up for more complicated cases, according to the company. 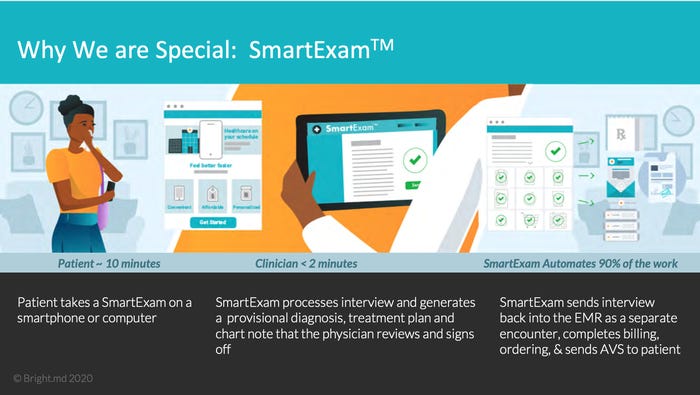 SmartExam works on smartphones and conducts interviews with patients.

It sends the full transcripts to the EMR and completes billing, too. 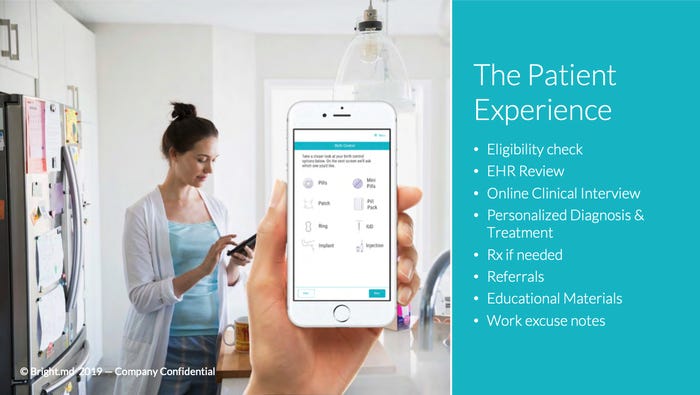 SmartExam can even write you a work excuse note.

At the end of the session, the product gives recommendations, referrals, and prescriptions if needed, all subject to the doctor's approval. 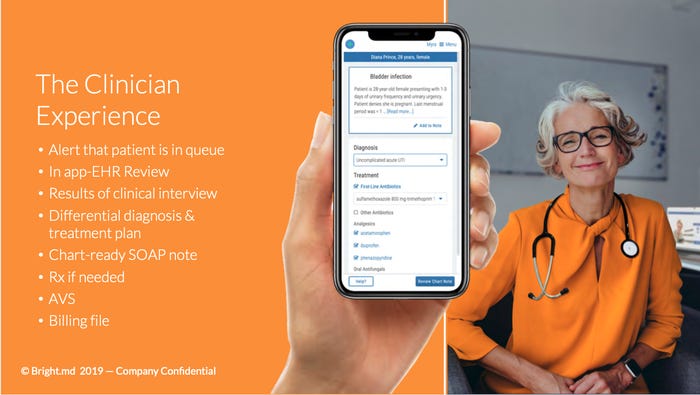 Doctors can see when their patients are being seen by the bot. They review its diagnosis, notes, and prescription recommendations. 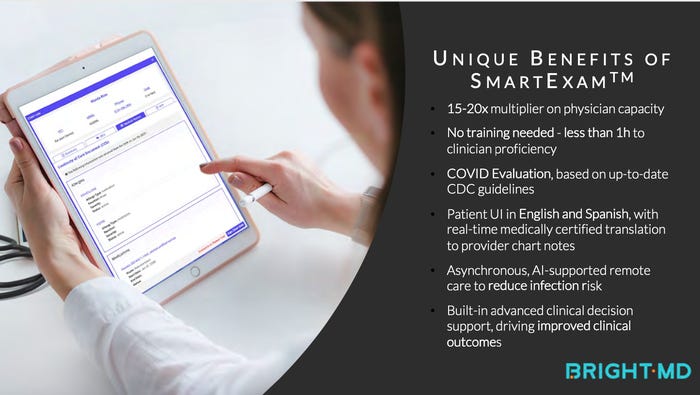 It takes less than 1 hour of training for doctors.

The product boosts physician capacity and doesn't require much training, according to Bright.md. 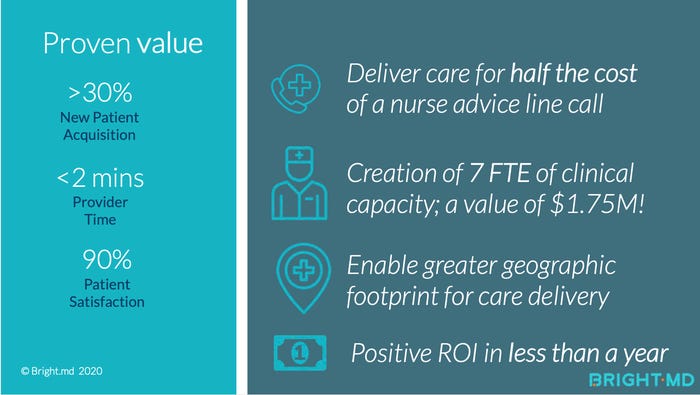 It's cheaper than nurse advice lines, according to the startup.

Health systems can expand their geographic reach beyond patients who can physically come into the hospital or clinic. 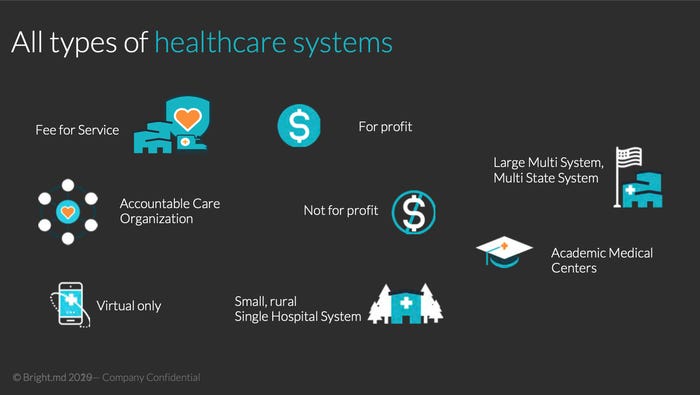 While Bright.md's typical customer is a mid- to large-sized health system, its technology is compatible with smaller clinics and doctors' groups, too, according to the startup. 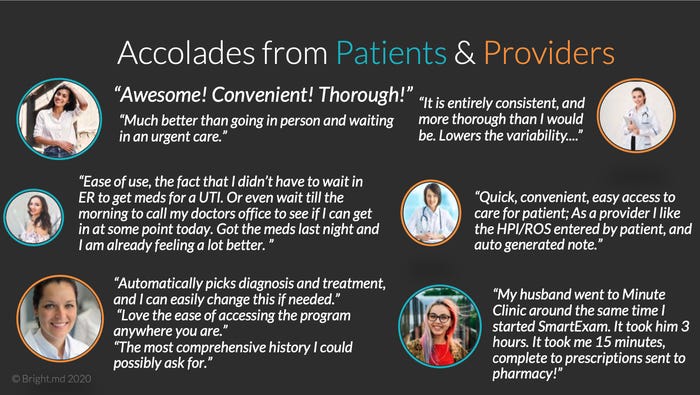 Bright.md shared patient and physician testimonials with the potential investors.

One customer used the platform to get medication for an infection, according to Bright.md. 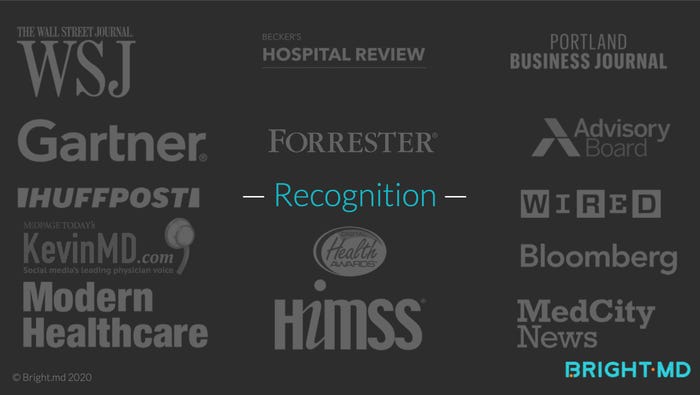 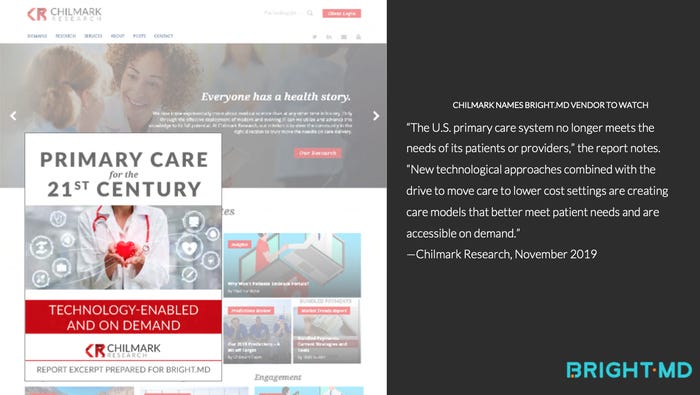 Costantini said the healthcare system got what it asked for when it came to digitization: fee-for-service and some help with billing. 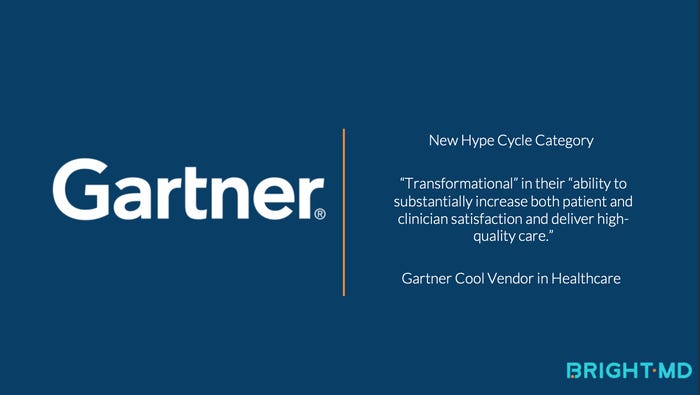 In its annual list of "cool vendors in healthcare providers," Gartner included Bright.md in 2016. 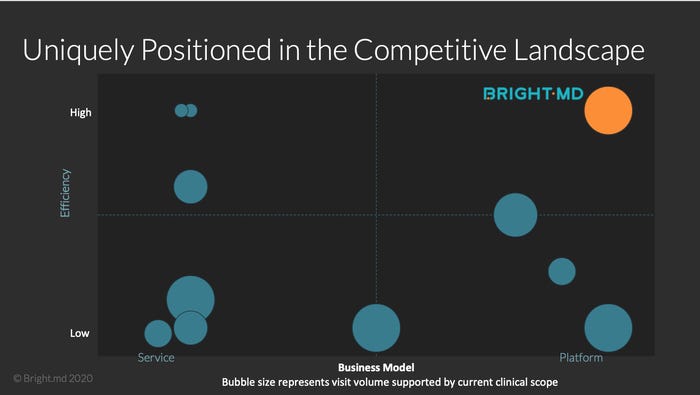 SmartExam expands how many patients providers can see within a limited window of time. 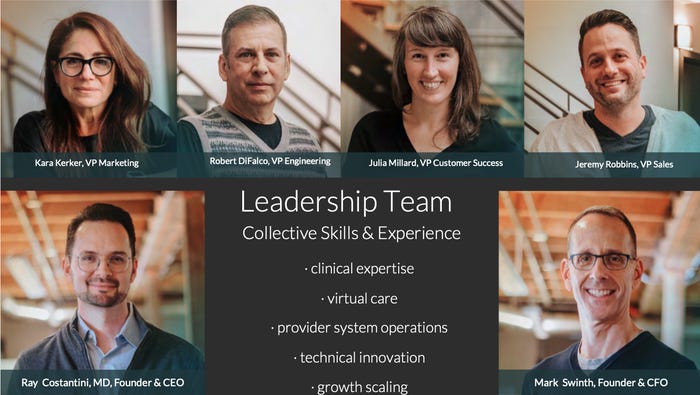 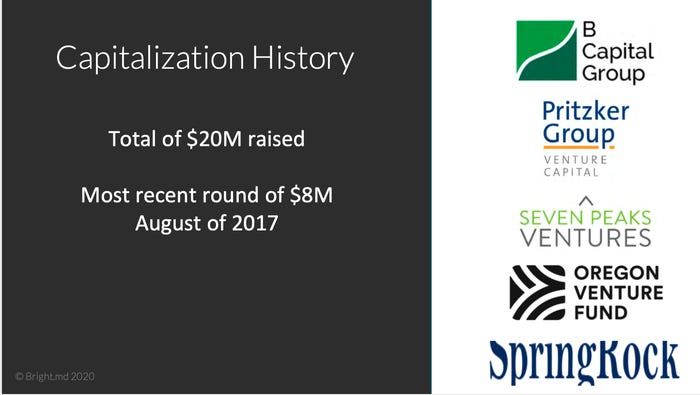 New investors joined the round after seeing this deck, according to Bright.md. 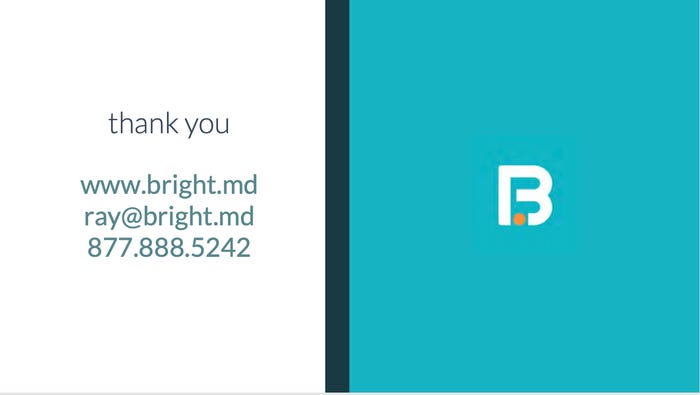 Bright.md concludes with this slide.