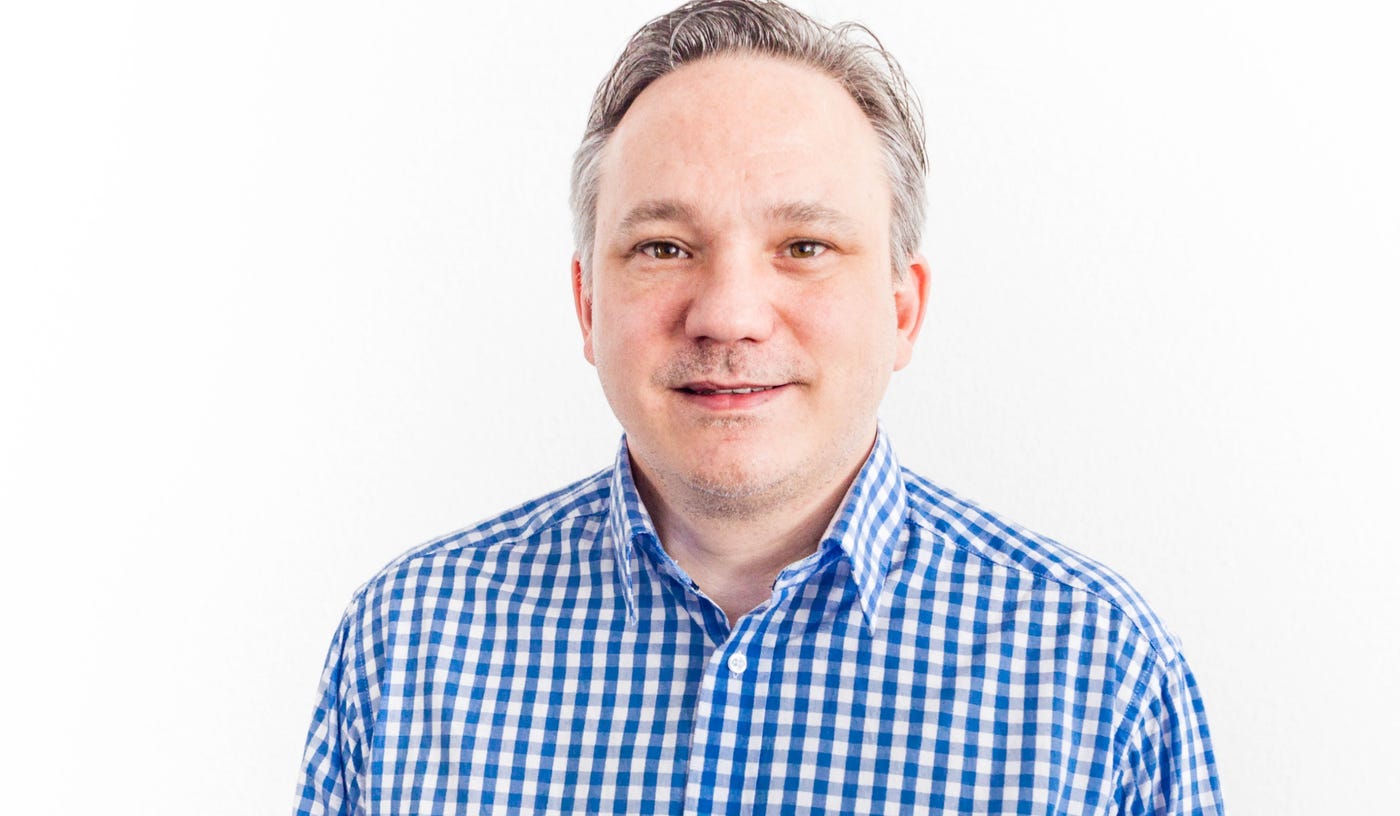 Database software is a long-established market in the tech industry, but Claudius Weinberger was still able to find a new niche within it.

A big trend in the database market over the last 20 years or so has been the the move away from traditional so-called relational databases. Those are the ones popularized by Oracle and typically represented by tables filled with columns and rows of data. They’re also frequently known as SQL — or structured query language — databases, so named for the coding language used to search them.

Instead of focusing on tables of data, the newer, noSQL databases focus on the relationships among different bits of data, or on organizing data in the form of virtual documents. The noSQL databases offer advantages over their predecessors, particularly in being able to efficiently handle the vast amounts of data companies were now collecting in the post-iPhone era.

But they also had a big drawback. Each kind organized data differently. To find data within them, programmers had to learn different kinds of query languages for each one. Weinberger foresaw that managing all of that data, across all of those different types of database, was going becoming a major headache.

“We will see a lot of companies struggling with all the different products they have in place,” he said he thought at the time.

ArangoDB offers three databases in one

Weinberger’s epiphany led to ArangoDB, a new kind of database that he started as a project in 2012 and then built a company around two years later. ArangoDB was one of the first so-called multi-model databases. It natively supports three of the major kinds of noSQL databases — graph databases, document databases, and key-value database.

Perhaps more importantly, it allows programmers to search across the different kinds of databases it supports using the same querying language: A homebrewed variation on the ubiqitious SQL, called ArangoDB Query Language, or AQL.

So companies can just use ArangoDB instead of managing three different kinds of databases from three different vendors. And programmers only have to learn one query language to search it — a language that’s based on the SQL thay are likely already familiar with.

“That makes it much easier,” Weinberger said in a recent interview with Business Insider. He continued: “It’s a solution to handle many different use cases.”

Combining the different databases and allowing users to search across all of them also allows ArangoDB to be used in new ways that just can’t be done with older, separate ones, he said.

“That is the main point of ArangoDB and why we built it,” he said.

Weinberger was something of a trend-setter. Many other companies, including industry stalwart Oracle, now offer what they call multi-model databases. The difference is that few of them natively support multiple database formats, Weinberger said. Instead, they typically start with one kind of database and bolt on to it support for other kinds, he said. The problem with that is that they generally don’t allow users to search through the various databases using only one query language, he said.

“There’s not really one native multi-model database like ours on the market,” Weinberger said.

ArangoDB operates on a freemium model. Its core product is actually available as open source, meaning users can download, modify, and redistribute the software as they wish. It offers extra features and technical support for an annual fee, pitched to larger businesses who want to put the software to work at larger scales.

ArangoDB is making a new home for itself in San Francisco

Many companies have bought into Weinberger’s vision. Some 500 companies and other organizations around the globe use ArangoDB, largely for application development. Numbered among its customers are some of the biggest companies in the world, as well as Airbus, Barclays, and Thomson Reuters.

ArangoDB has also started to win favor among investors. In March, the company raised $10 million in a Series A funding round that was led by Bow Capital. Its now raised some $17 million in total.

The 55-person company is using the new funds in part to relocate its headquarters from Cologne, Germany, where Weinberger founded it, to San Francisco, so that it can have a bigger presence in its most important market, the US. While ArangoDB is keeping its core software development team in Germany, it’s building out other teams in Silicon Valley, including sales and marketing and human resources.

Here’s the pitch deck Weinberger and his team used to raise ArangoDB’s $10 million in new funding: 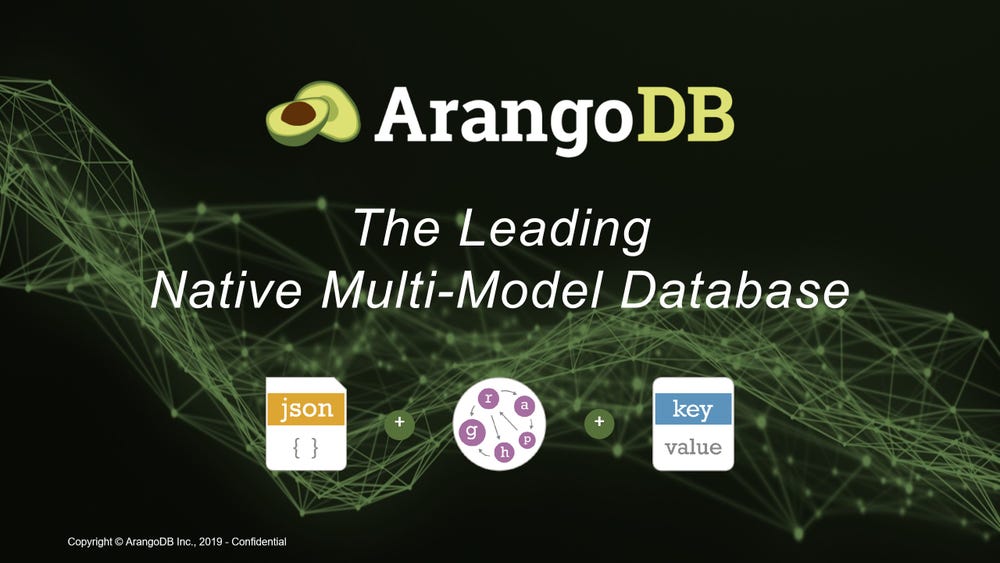 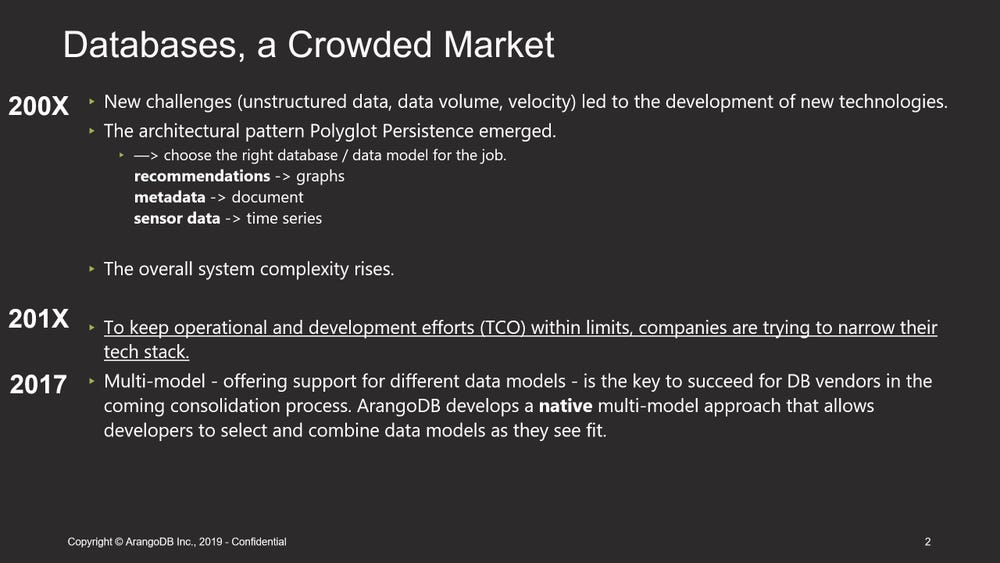 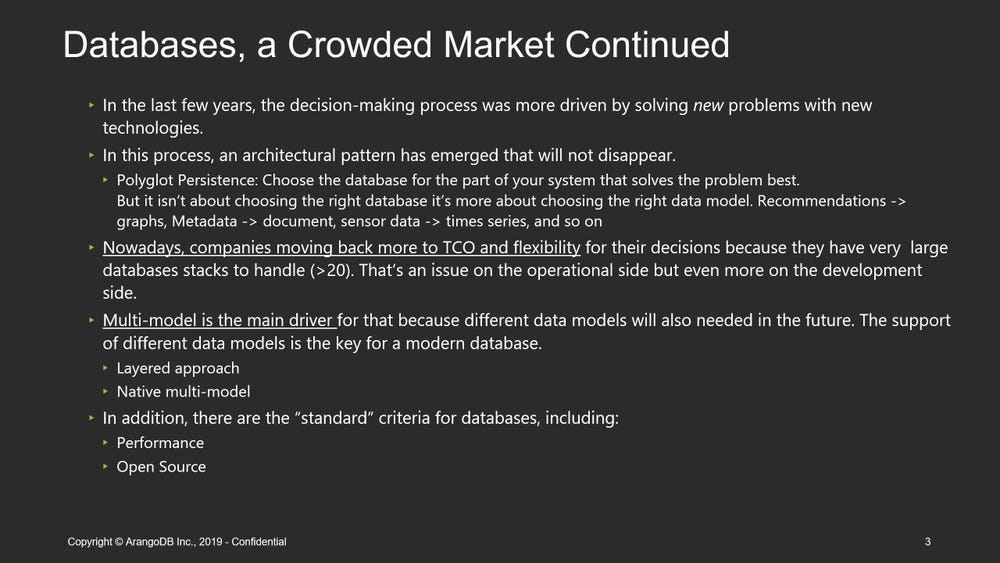 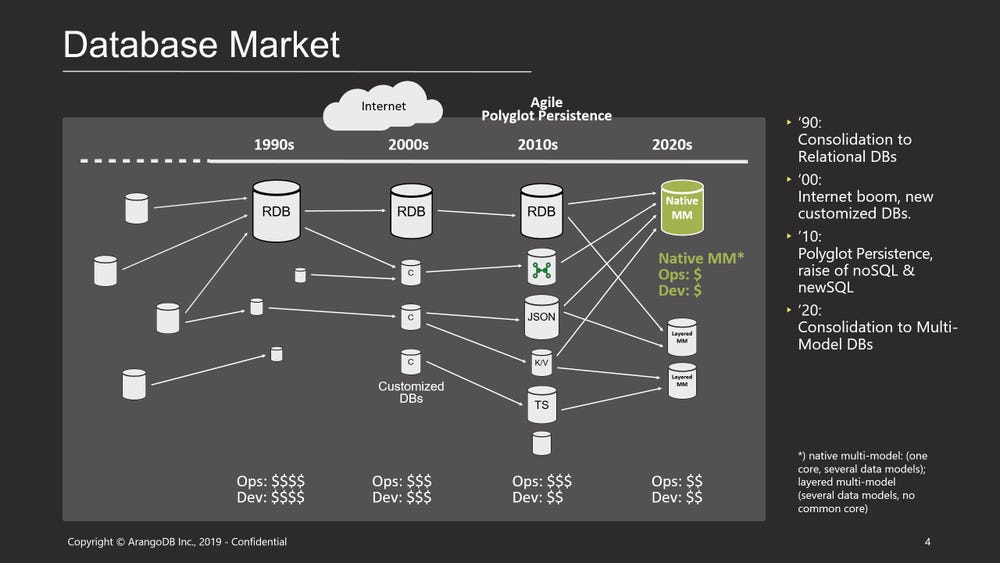 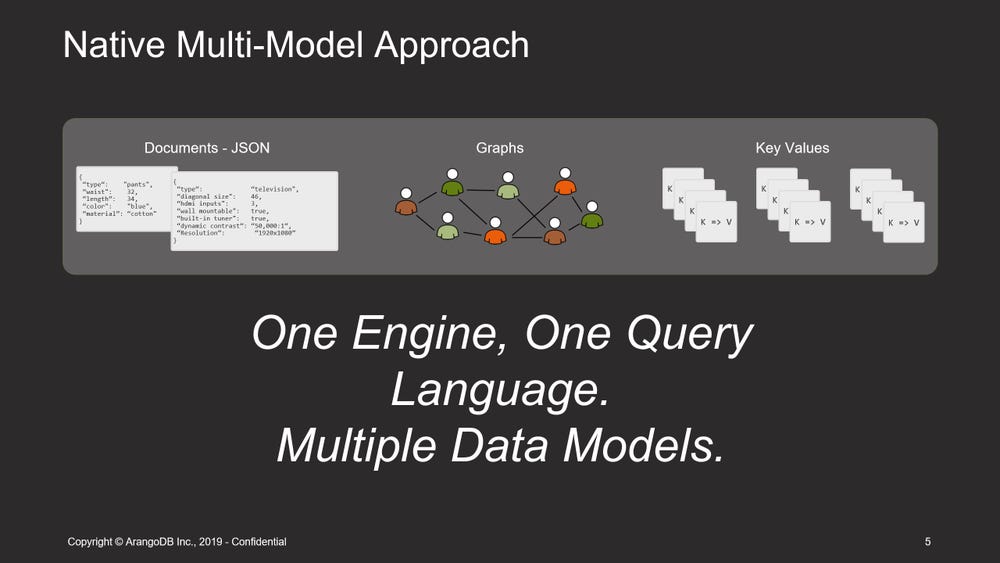 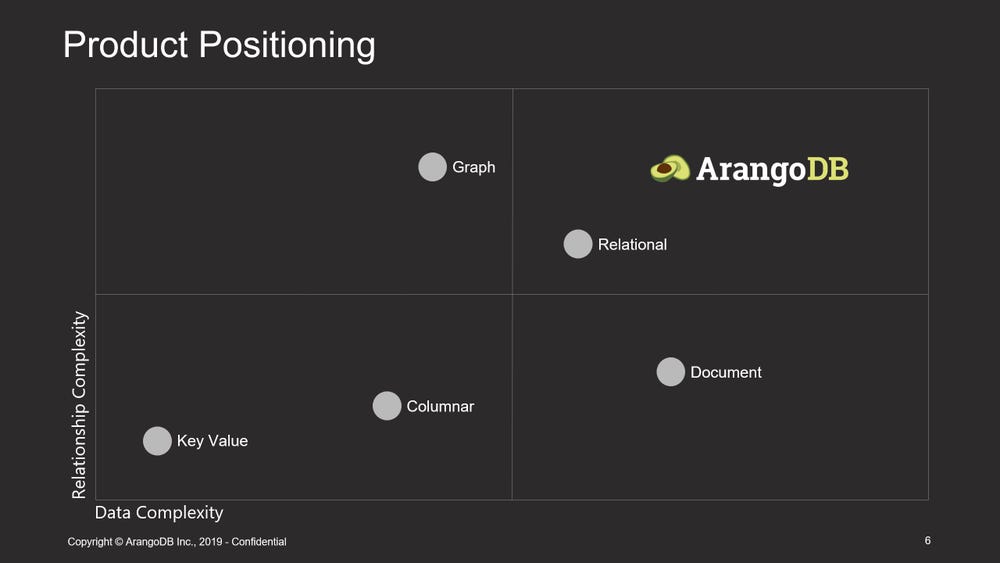 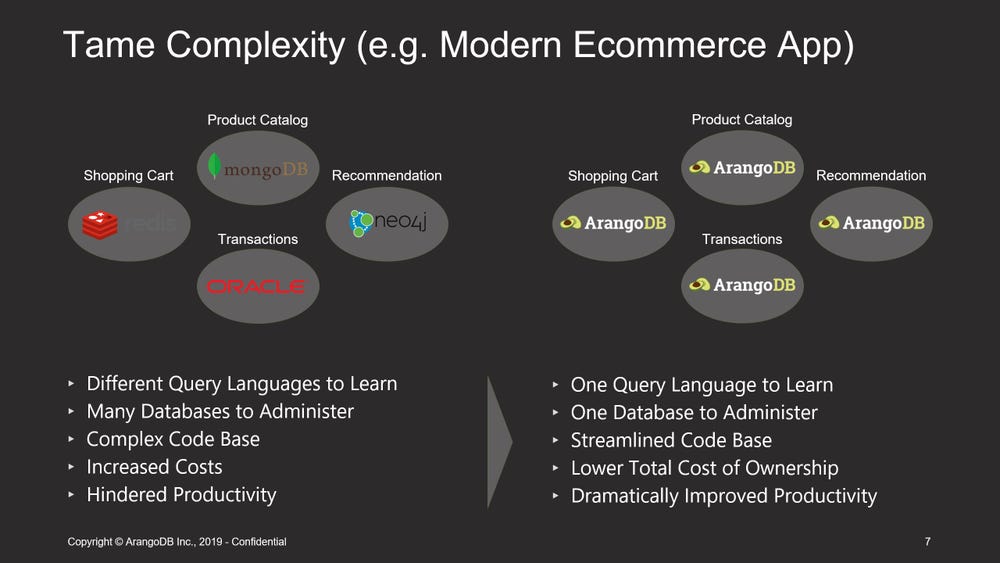 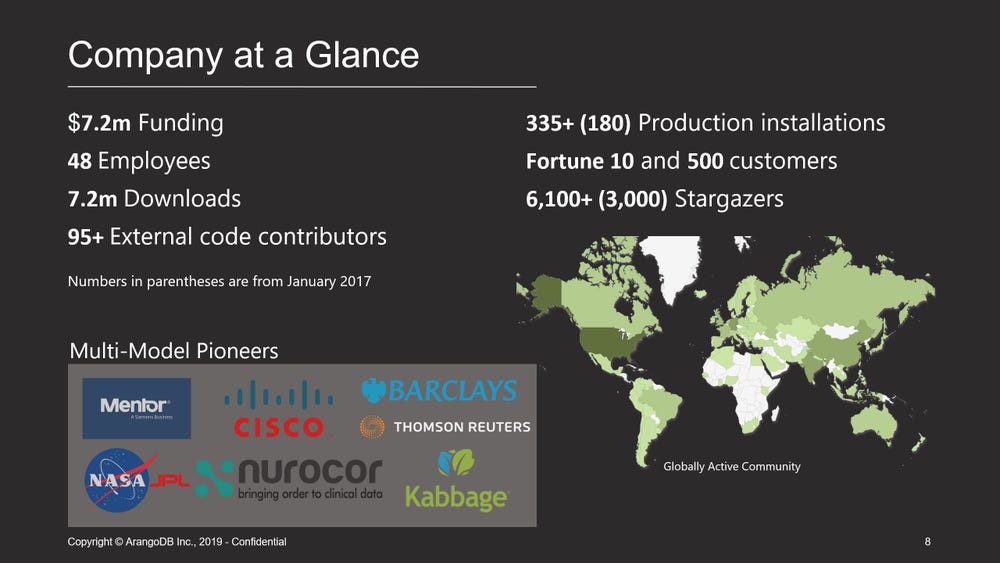 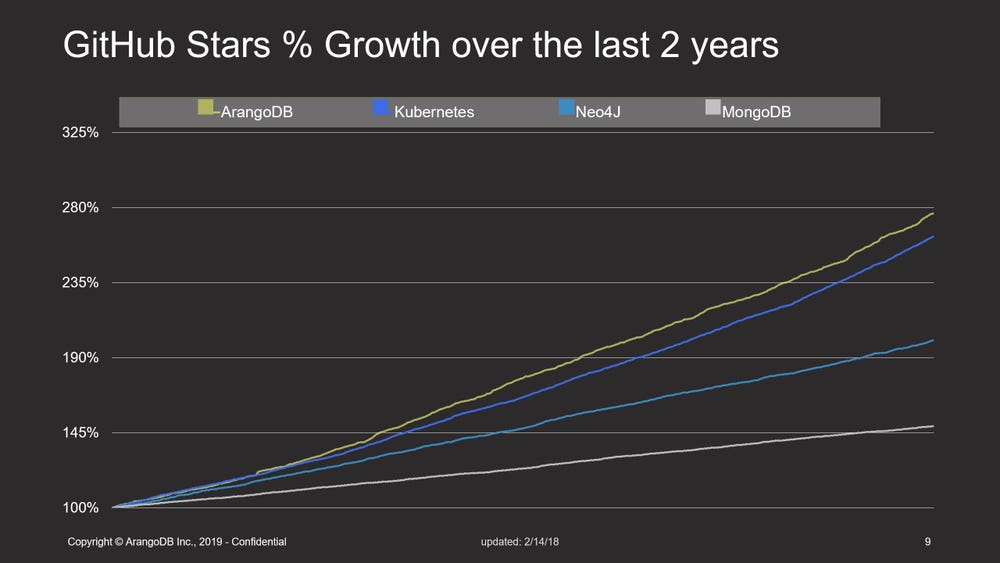 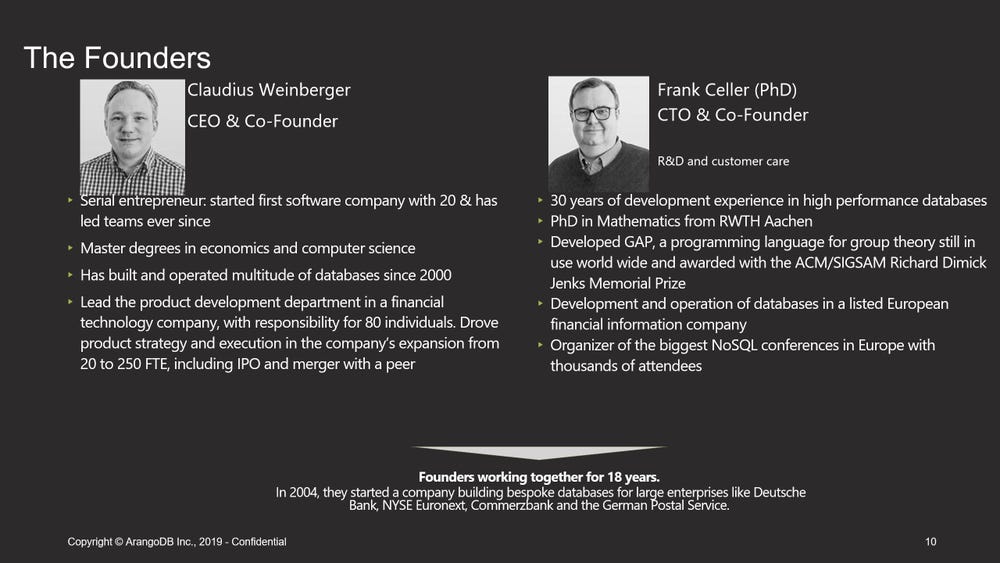 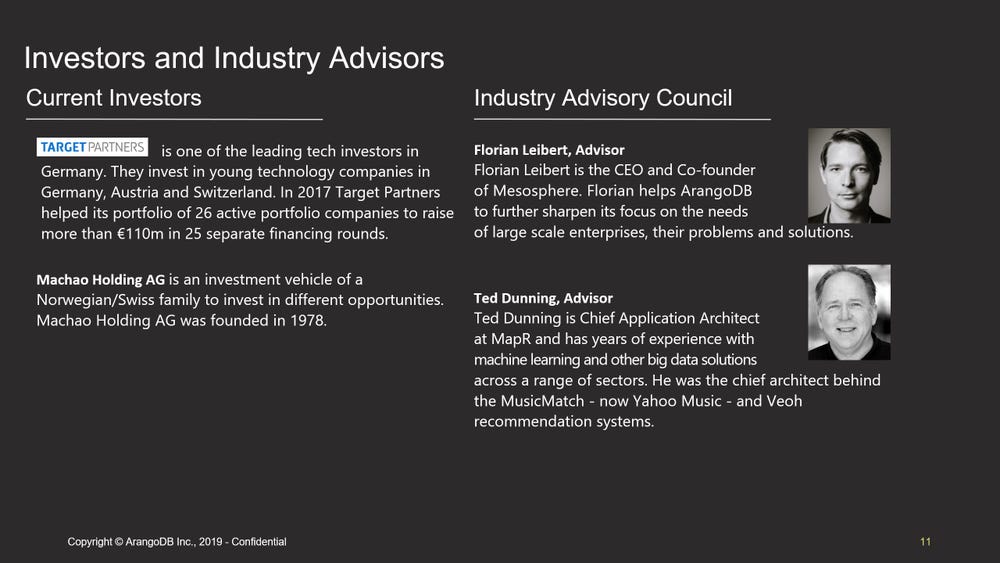 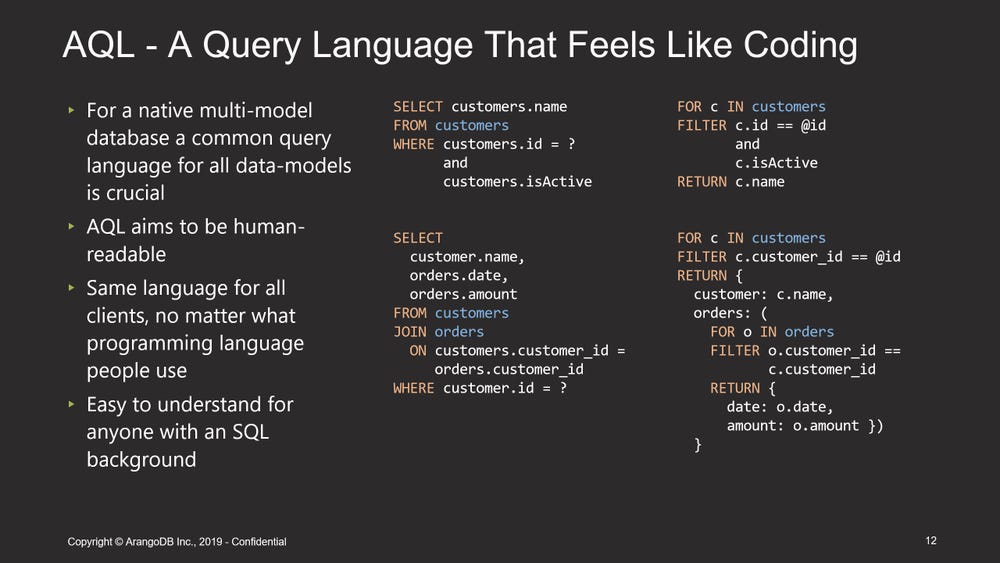 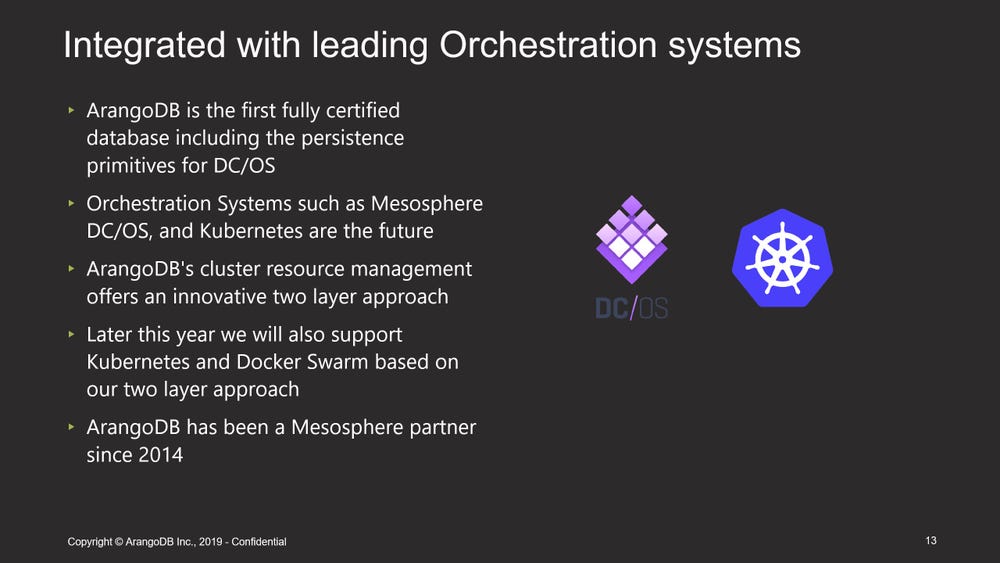 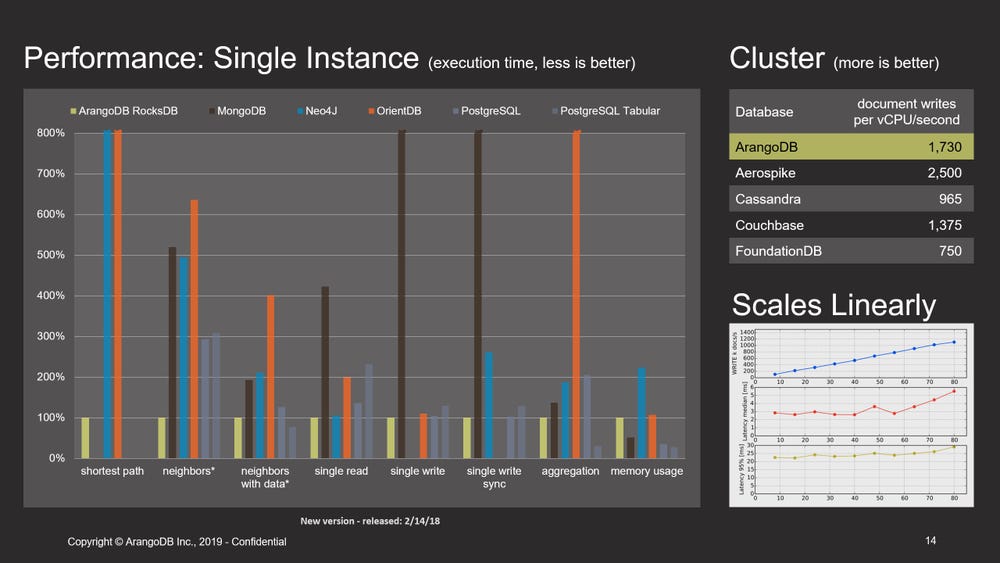 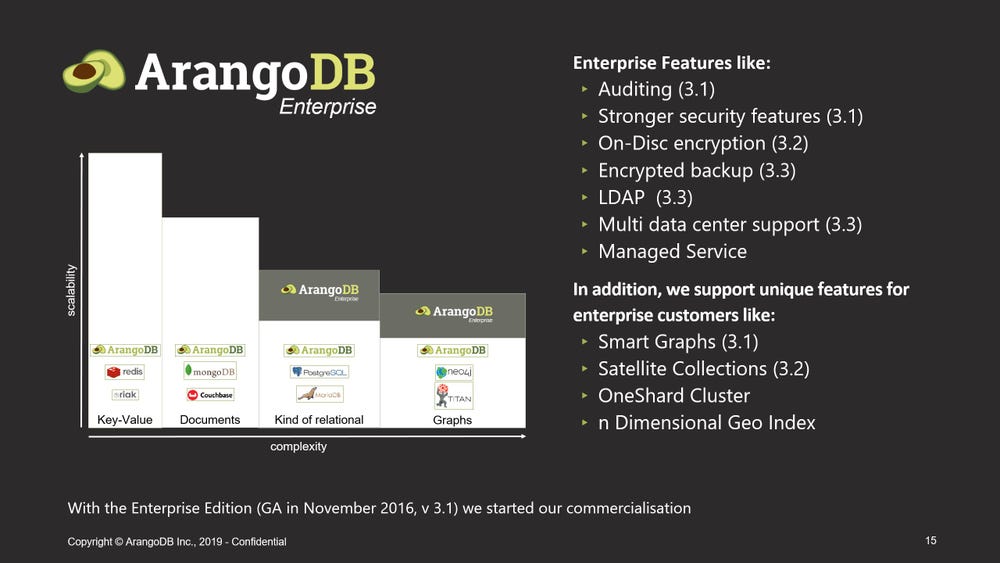 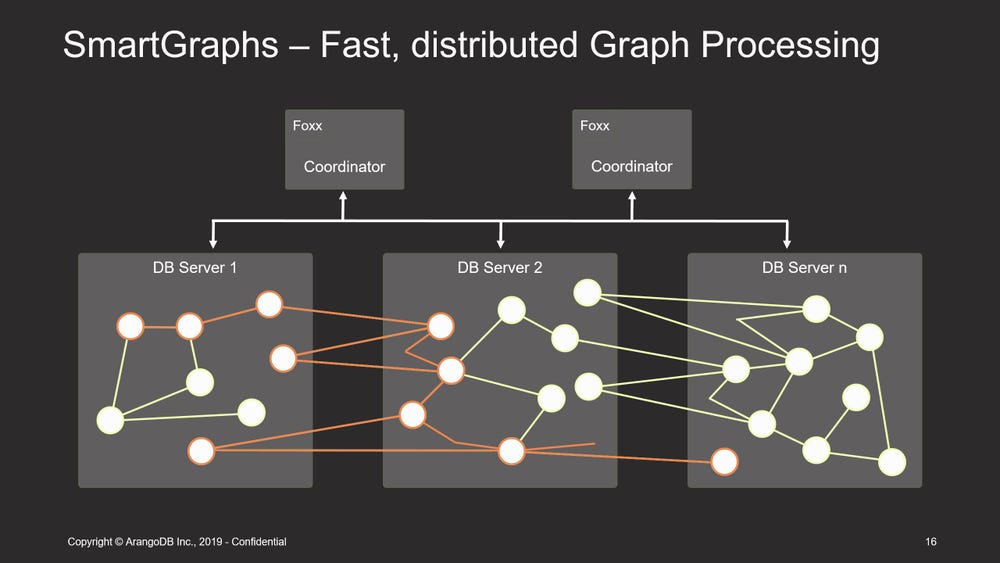 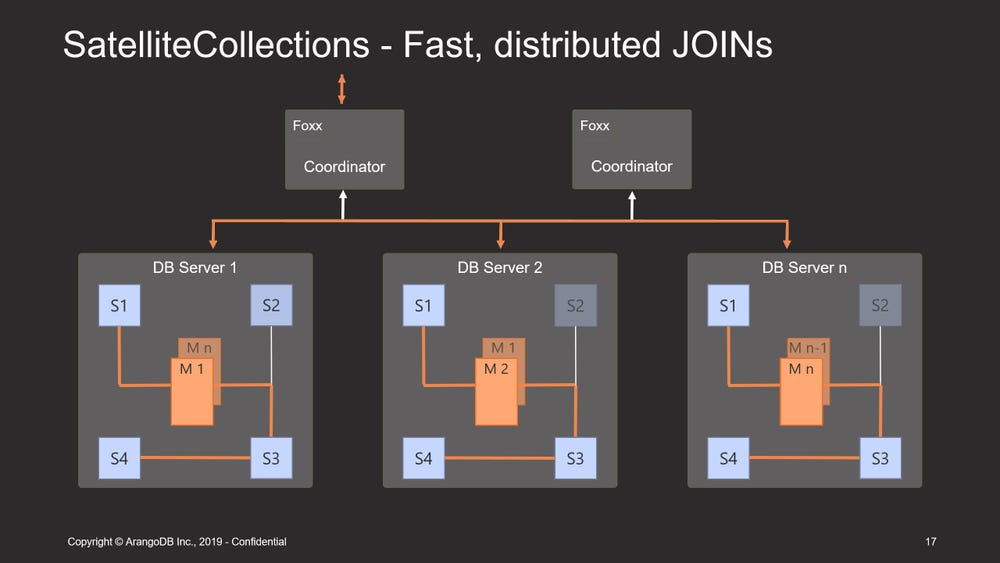 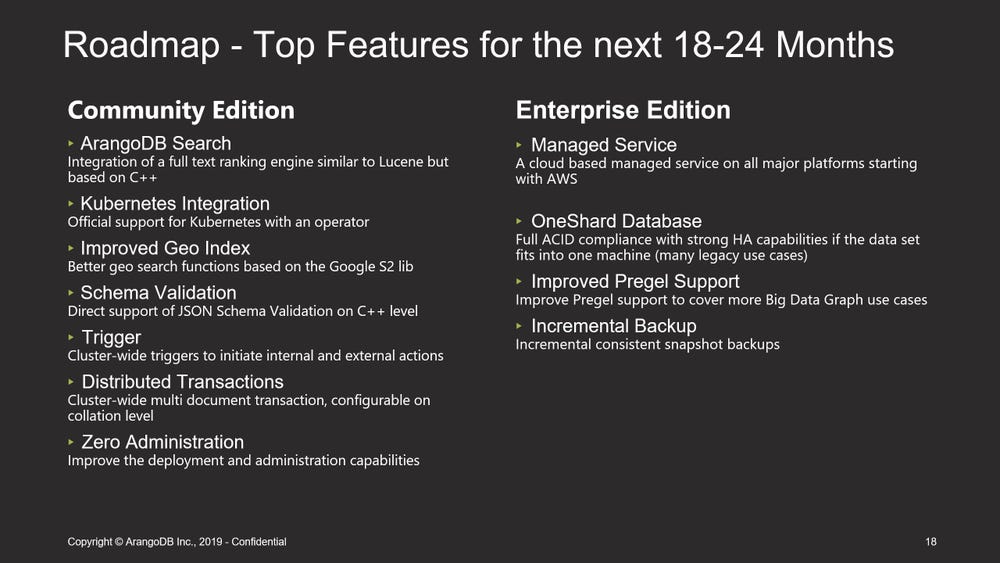 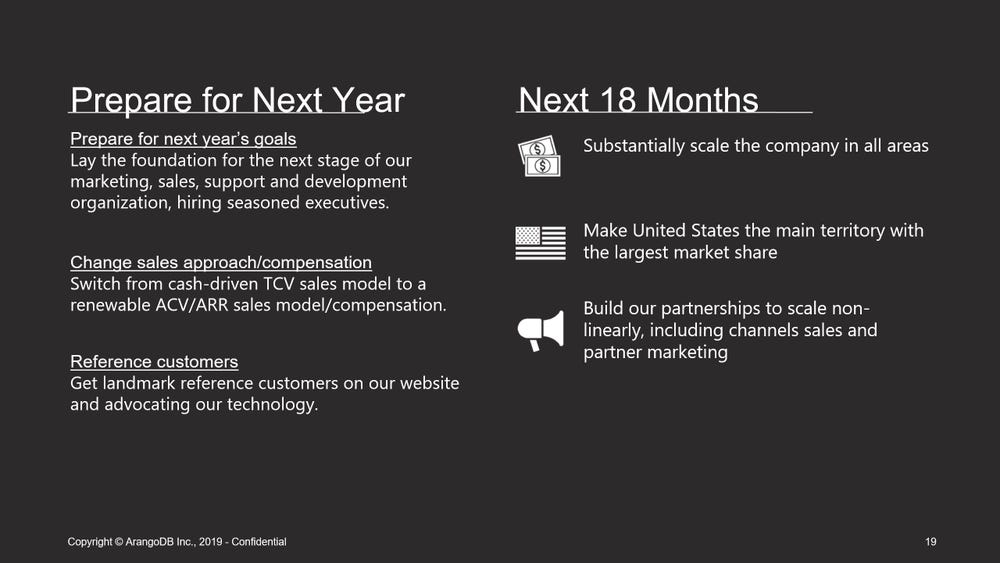 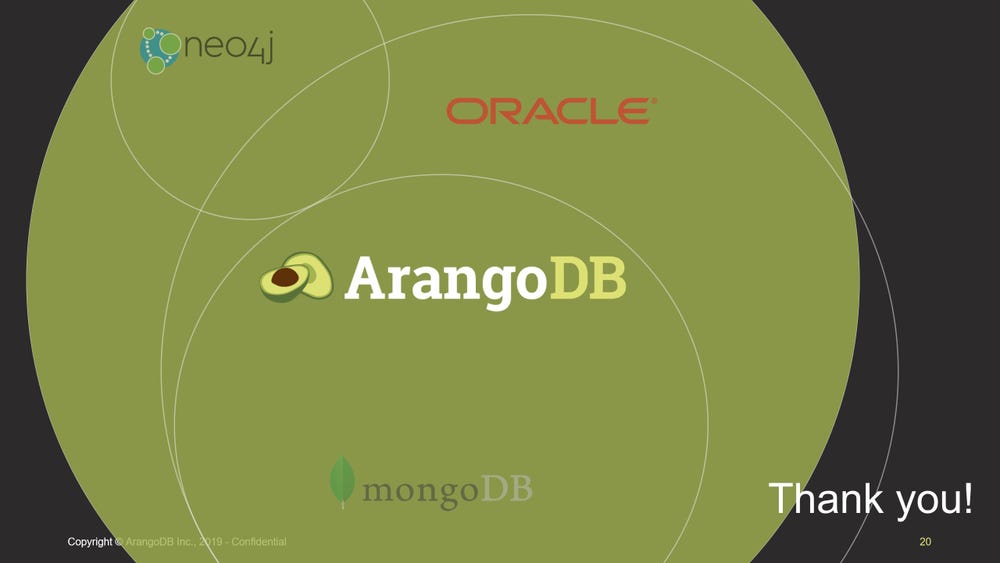